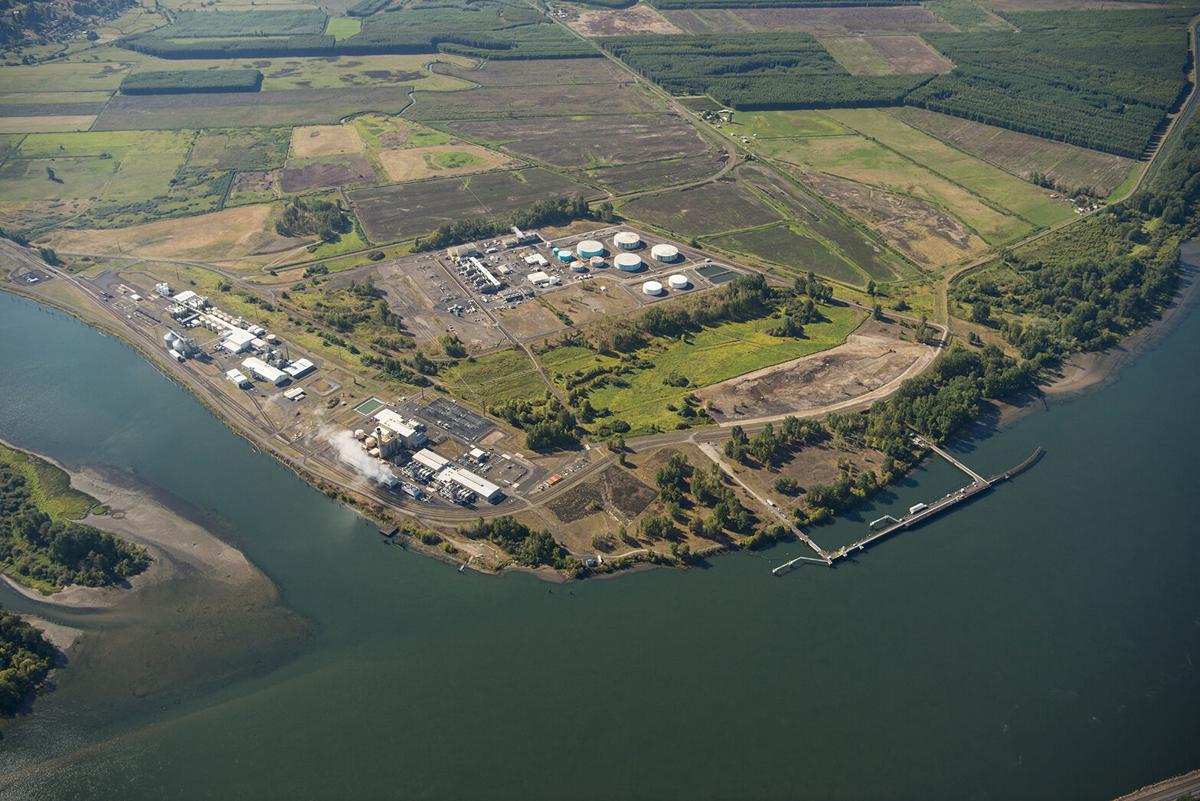 The Port Westward Industrial Park is at the center of a controversy involving local farmers. 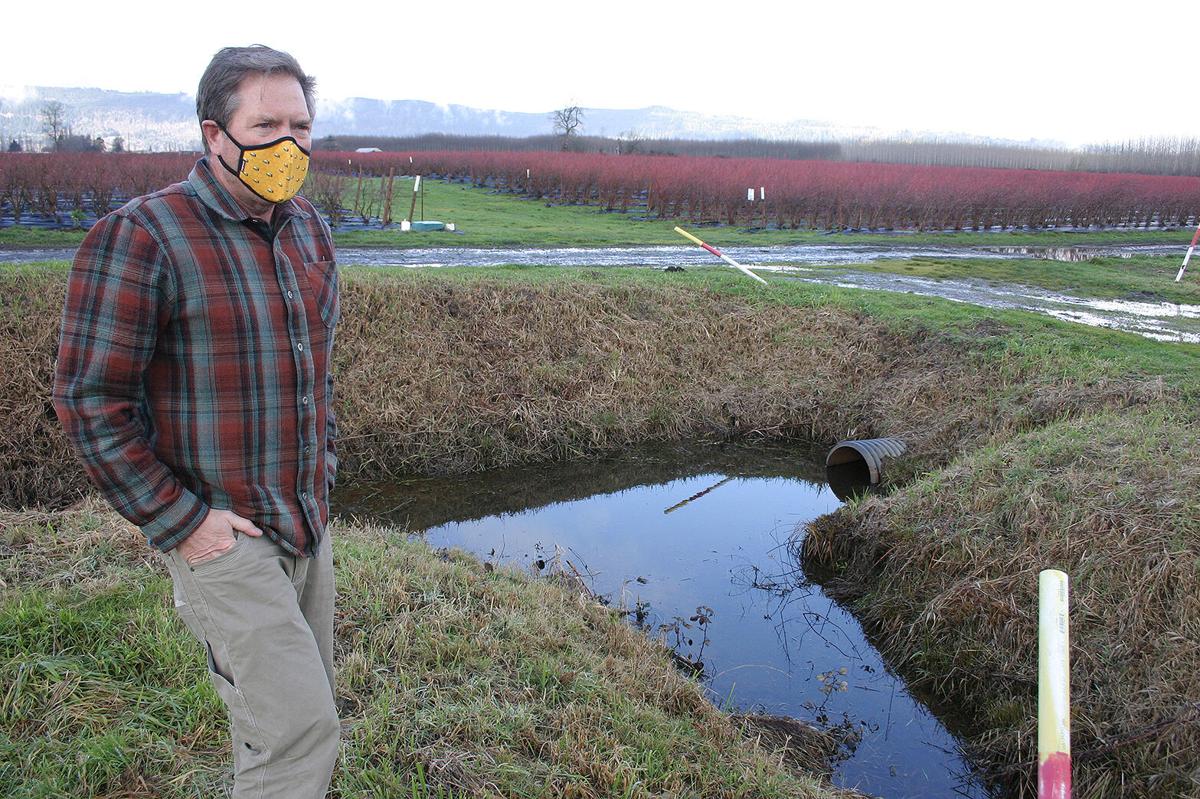 Water quality and drainage are interconnected in the Beaver Drainage District, says Jim Hoffmann, owner of Hopville Farms in Clatskanie, Ore. Hoffmann is concerned that a proposed industrial expansion at nearby Port Westward could impact his organic blueberry operation. 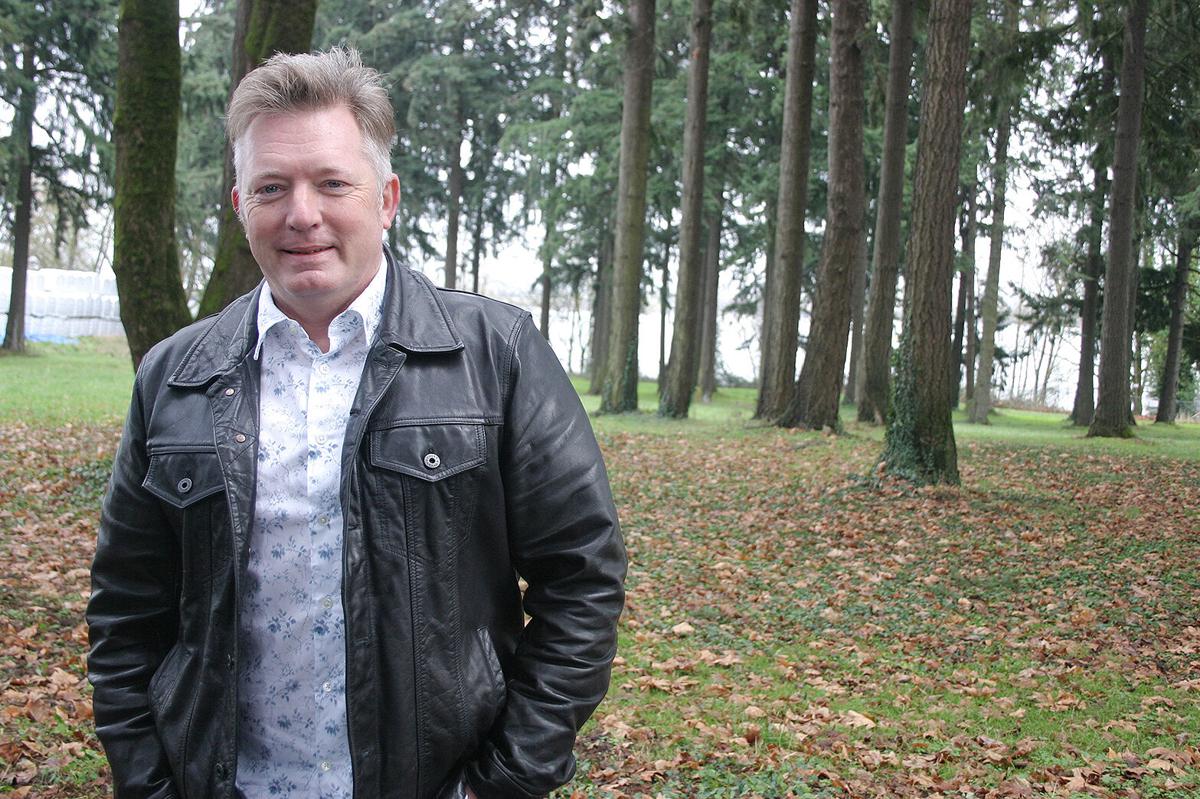 Douglas Hayes, executive director of the Port of Columbia County, outside the port’s main offices in Columbia City, Ore., along the Columbia River. 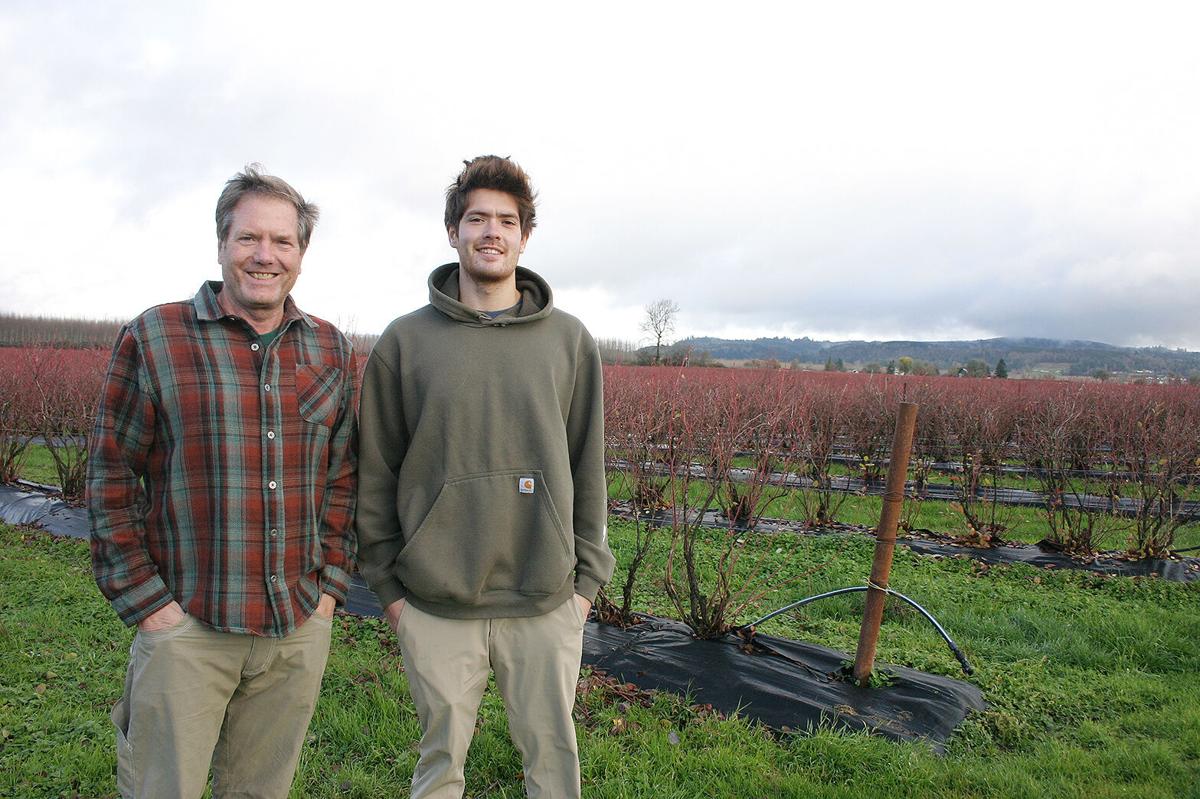 Jim Hoffmann, left, owner of Hopville Farms in Clatskanie, Ore., with his oldest son, Gus, in front of a block of organic blueberries. 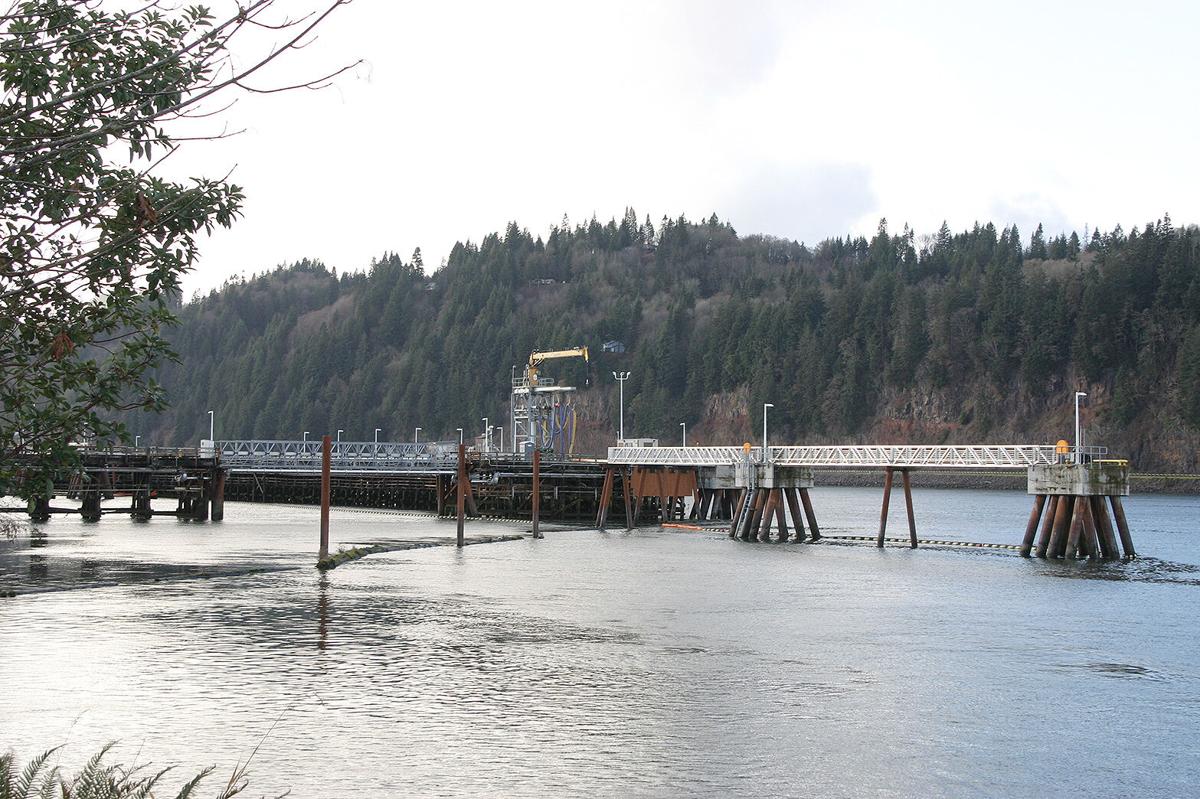 The deepwater dock at Port Westward is a unique resource, allowing access for large, ocean-going vessels. It is also self-scouring, meaning it never has to be dredged. 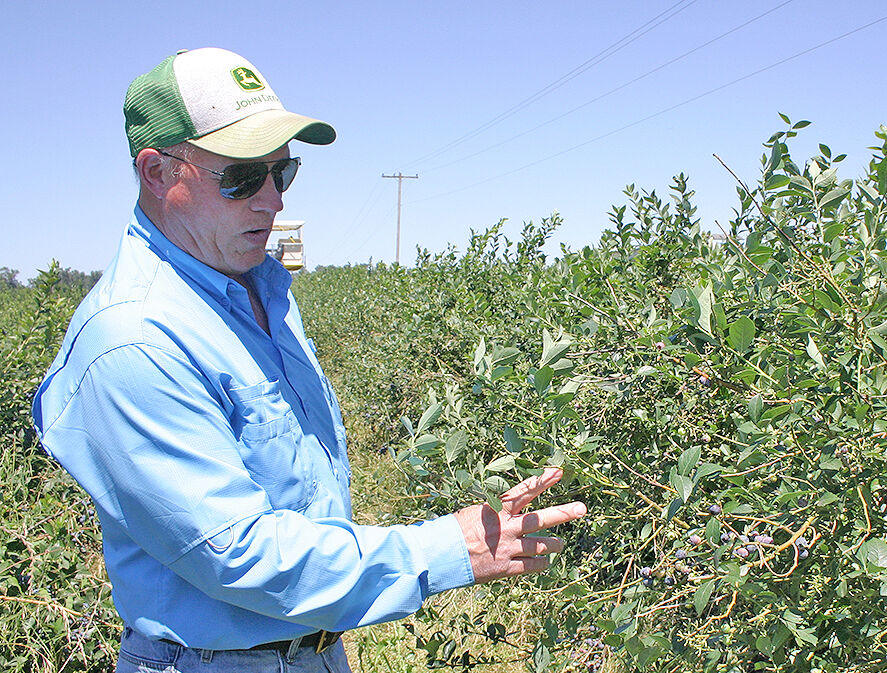 Doug Krahmer, president of Berries Northwest, worries that the surface water near his Clatskania farm could be compromised by industrial activities.

The Port Westward Industrial Park is at the center of a controversy involving local farmers.

Water quality and drainage are interconnected in the Beaver Drainage District, says Jim Hoffmann, owner of Hopville Farms in Clatskanie, Ore. Hoffmann is concerned that a proposed industrial expansion at nearby Port Westward could impact his organic blueberry operation.

Douglas Hayes, executive director of the Port of Columbia County, outside the port’s main offices in Columbia City, Ore., along the Columbia River.

Jim Hoffmann, left, owner of Hopville Farms in Clatskanie, Ore., with his oldest son, Gus, in front of a block of organic blueberries.

The deepwater dock at Port Westward is a unique resource, allowing access for large, ocean-going vessels. It is also self-scouring, meaning it never has to be dredged.

Doug Krahmer, president of Berries Northwest, worries that the surface water near his Clatskania farm could be compromised by industrial activities.

CLATSKANIE, Ore. — A beaver scurried into a nearby slough as Jim Hoffmann drove his growling UTV past rows of organic blueberries at Hopville Farms.

Hoffmann bought the property as an investment 10 years ago in Clatskanie, Ore., about 60 miles northwest of Portland along the Columbia River. What he found was an impeccable area for growing blueberries, with its cool climate, clean water and soils rich in organic matter.

“The soil, it’s like peat,” Hoffmann said. “Because of that, it lends itself to organic growing.”

But Hoffmann said his farm would face irreparable harm caused by a proposed expansion at the neighboring Port Westward industrial park, which is seeking to rezone 837 acres of high-value farmland for rural industrial development. The case illustrates a common scenario playing out in many parts of the West as development moves onto agricultural land.

Columbia County commissioners have already approved the rezone request twice since 2014, only for the decision to be appealed and remanded both times by the Oregon Land Use Board of Appeals, or LUBA.

Now, just one question remains: can a new industrial tenant be compatible with local agriculture, fish and wildlife?

The Port of Columbia County, which owns Port Westward, is confident the answer is yes, though opponents such as Hoffmann disagree. It is just the latest chapter in a years-long dispute that could have significant environmental and economic ramifications for the small, rural county.

At the heart of the issue is a port with an undeniably attractive location for a variety of industries.

Port Westward began life as the Beaver Ammunition Storage Point Depot, built on the south bank of the Columbia River during World War II to store and ship munitions for troops fighting in the Pacific Theater.

The federal government closed the installation in 1964. Two years later, it was handed over to the Port of St. Helens — since renamed the Port of Columbia County.

Douglas Hayes, the port’s general manager, said the dock at Port Westward provides access to roughly 4,000 feet of deepwater frontage for large cargo ships. It is also self-scouring, meaning it never has to be dredged.

“The dock is a very unique geographical feature up there,” Hayes said.

Meanwhile, NEXT Renewable Fuels, a Portland firm, wants to build a $1 billion biodiesel refinery at the industrial park capable of producing more than 37,500 barrels a day at startup. Project leaders secured a lease for 90 acres at Port Westward in 2019.

According to a 2012 economic study, the Port of Columbia County and its various properties support 476 direct jobs, 342 secondary jobs and a combined annual output of $88 million.

By further expanding its industrial base, the port’s directors hope to provide additional jobs and tax revenue to the county.

“Our mission is to bring jobs,” Hayes said.

There was just one dilemma — the land was zoned as “exclusive farm use,” or EFU, a designation intended to protect and preserve Oregon’s agriculture.

Farmland in Oregon is broadly protected under Statewide Planning Goal 3, which requires counties to identify EFU land. Rezoning farmland for industrial development requires a Goal 3 exception, which the port initially applied for and received from Columbia County in 2014.

Columbia Riverkeeper, a nonprofit environmental group, and Mike Seely, a local mint farmer, appealed the decision to LUBA, which remanded the decision back to the county.

The port fine-tuned and resubmitted its application in 2017. Specifically, it provided more information about what types of businesses might locate at Port Westward, identifying five potential uses that include forestry and wood products; dry bulk commodities; liquid bulk commodities; natural gas; and break bulk cargo, which doesn’t fit in a standardized container.

Again, Columbia County commissioners approved the request. Again it was appealed to LUBA, this time by Columbia Riverkeeper and fellow nonprofit 1000 Friends of Oregon.

While LUBA agreed the five proposed uses do depend significantly on Port Westward’s dock and no alternative sites could reasonably accommodate them, it remanded the decision again, ruling the port must do more to show compatibility with surrounding farms and habitat.

On July 21, the port submitted a 57-page report concluding the five industrial categories would be compatible with agriculture, kicking off the process for a third round.

Hayes said he anticipates the county will vote on the matter in early 2021.

“There are mechanisms (for mitigation) in place,” Hayes said. “There’s no reason that both can’t operate next to one another up there.”

Hoffmann, whose 175 acres lie 2 miles downstream of Port Westward, is not reassured.

Water quality is the biggest worry, Hoffmann said, and water is paramount to the survival of his farm. An oil, gas or chemical spill could be catastrophic, he said.

The area is within the Beaver Slough Drainage District, with approximately 5,000 acres of low-lying land protected by a dike holding back the Columbia River. The river feeds into a series of interconnected sloughs and ditches where farmers draw their irrigation water.

Farms rely entirely on surface water, Hoffmann said. Drilling wells is not an option, due to high levels of iron bacteria in the groundwater, resulting in an orange slime that sticks to pipes, pumps and plumbing fixtures.

“The water has to be clean,” Hoffmann said. “We can’t have industrial users contaminating this water.”

Doug Krahmer, president of Berries Northwest, also grows 175 acres of fresh-market blueberries in the district. He is similarly concerned about water pollution, and the increased threat of flooding.

In its compatibility analysis, the port mentions that the dike can serve as an emergency backstop to prevent contaminants from reaching the Columbia River. That would require turning off the three water pumps the district operates to prevent floods in an area that receives 61 inches of average annual rainfall.

While the port says it does not have authority itself to turn off the pumps — and all businesses at the port must have plans to contain a spill — it nonetheless has district patrons on edge.

Farmers such as Krahmer and Hoffmann said that essentially means sacrificing agriculture to save the river with its endangered salmon runs. Krahmer said his blueberries, in which he’s invested $30,000 per acre, would die within a few days in standing water.

“And who’s going to pay our damage?” Krahmer asked. “Because I can guarantee you there would be significant damage.”

Wendy Schmidt, another neighbor, purchased 25 acres in the district last year, growing primarily hay, along with some blueberries, cherries and apples. Her goal, she said, is to establish an organic goat cheese farm.

Hayes, the port manager, said they are sensitive to concerns from residents, and making sure any business that comes in is “a good fit” for the county.

Any business that seeks to locate at Port Westward must use the dock as part of its operations, Hayes said, and would be subject to a litany of public review — from the port commission to a battery of state and federal regulatory programs.

The port’s compatibility analysis delves further into those programs, reading like an alphabet soup of agencies in charge of overseeing environmental quality and emergency response.

Critics, however, argue that is not adequate and does not directly address compatibility concerns with farmland.

Jim Johnson, land use and water planning coordinator for the Oregon Department of Agriculture, submitted comments on the proposal in which he said farms in the area have a proven track record of growing high yields of high-quality crops, including 1,000 pounds per acre of peppermint and spearmint.

The port’s compatibility analysis should take into account specific growing practices at each farm, Johnson told the Capital Press. For example, dust from increased traffic could blow onto blueberries intended for the fresh-market. These berries cannot simply be washed without becoming mushy and ruined.

“You need to evaluate each farm, and each practice associated. You cannot just be generalizing,” Johnson said. “That is not a comprehensive analysis, as required by the law.”

Lauren Goldberg, legal and program director for Columbia Riverkeeper, said the group will appeal if the county approves the port’s latest rezone application.

”This is the wrong place for a massive industrial port, and it’s the wrong time to be pushing high-impact industrial development like a fossil fuel terminal in the Columbia River estuary,” Goldberg said.

Working side by side

In fact, he said, it is already happening.

Earlier this year, the port unanimously approved two new agricultural leases on the same 837 acres it is trying to rezone. Seely Mint will lease 211 acres, and Columbia River Ranch will lease 243 acres for cattle grazing.

Gary Bailey, the ranch CEO, said he is in favor of the rezone, and sees it as a win-win for the county to support operations like his while also adding jobs.

“I’m not even concerned,” he said.

Robert Keyser, a port commissioner and lifelong Clatskanie resident, said the port has always envisioned farm leases as part of the industrial complex at Port Westward.

“I don’t want to see anything that puts that at risk,” Keyser said.

Hoffmann, of Hopville Farms, said he is not opposed to all development, and praised PGE as good neighbors. But without knowing which other companies might be building there, he remains firmly against the rezone.

“(The port) should wait until they have a user who wants to come here, and then we can vet whether it’s compatible, as opposed to giving them a unilateral right,” he said. “This is a big bathtub. And we’re sharing this water. They have to respect that.”