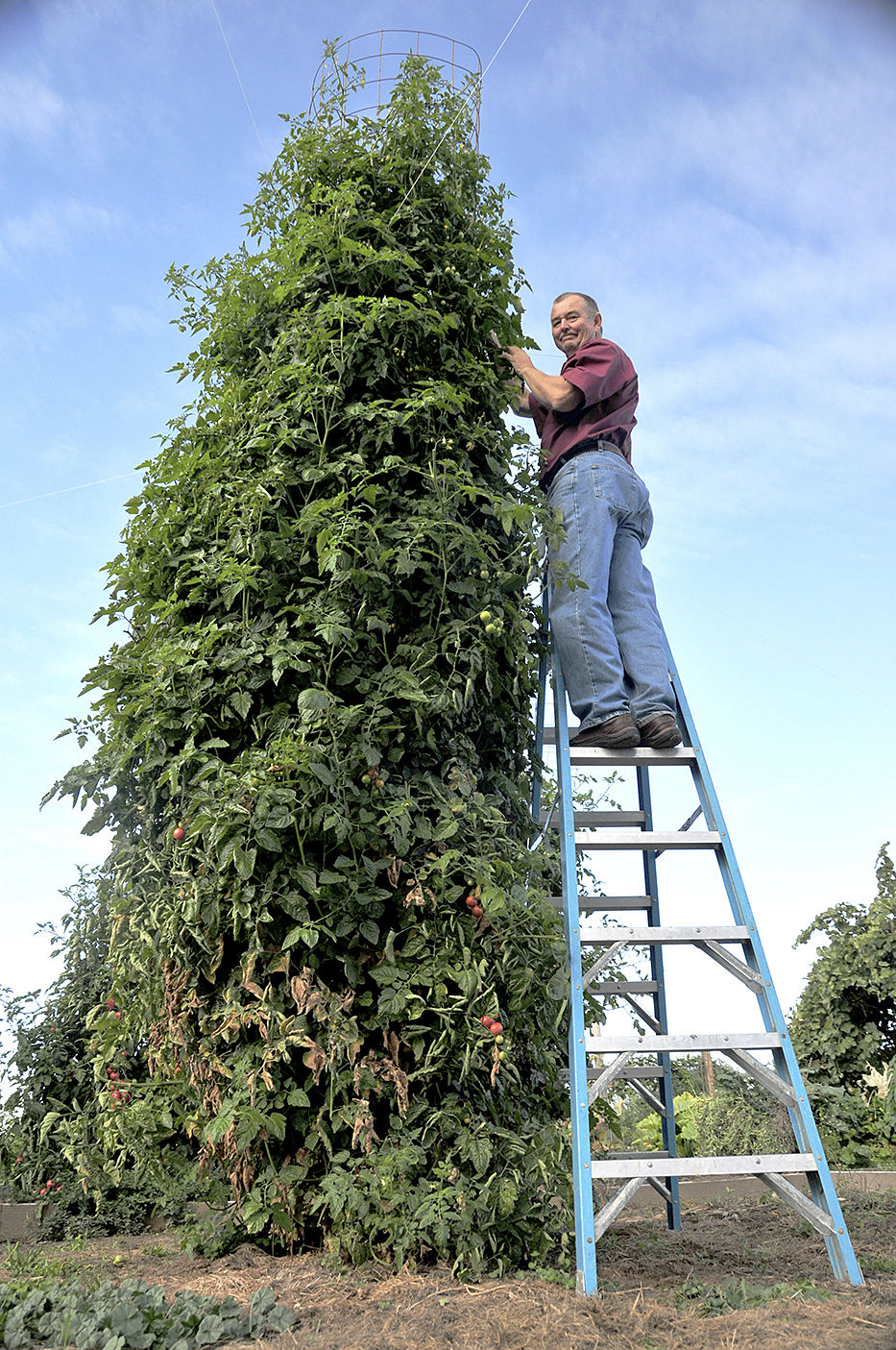 Jim Zamzow of Dr. JimZ Fertilizer Company and his 17-foot "Early Girl." The plant’s incredible size is credited to liberal applications of Zamzow’s Tomato Secret and Chicken Soup for the Soil. 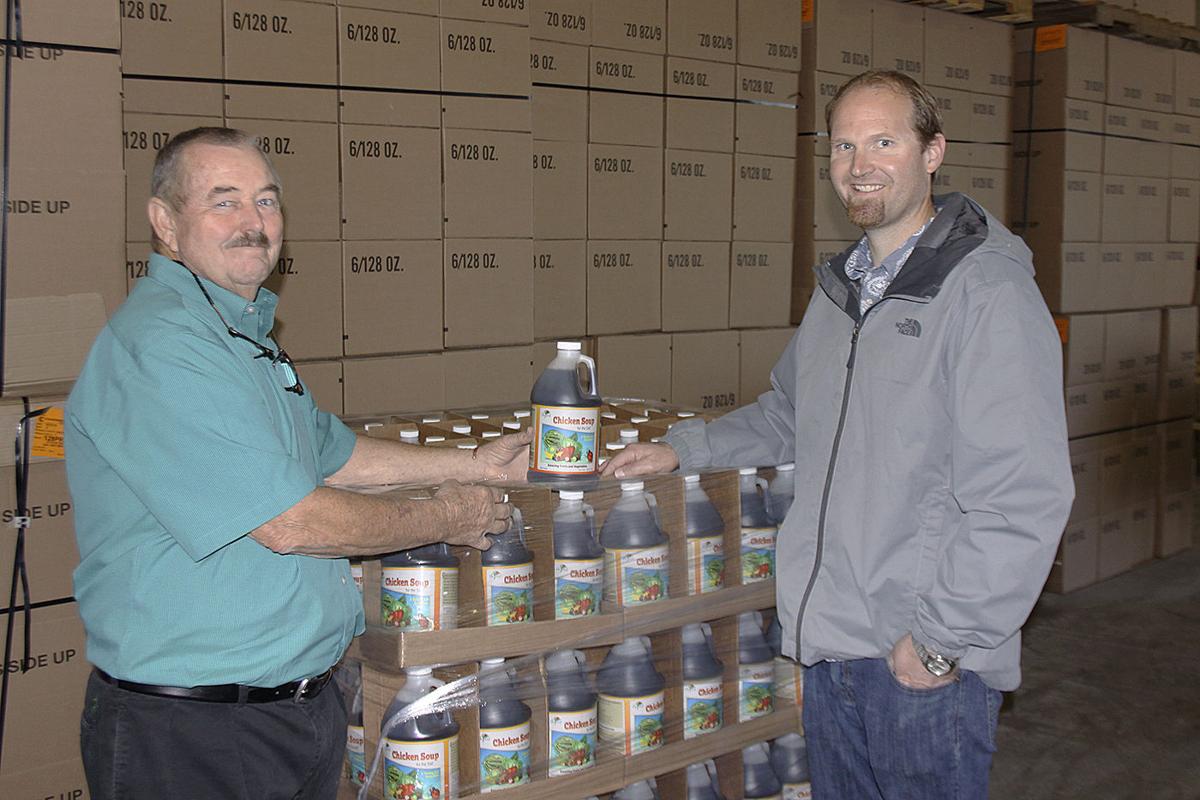 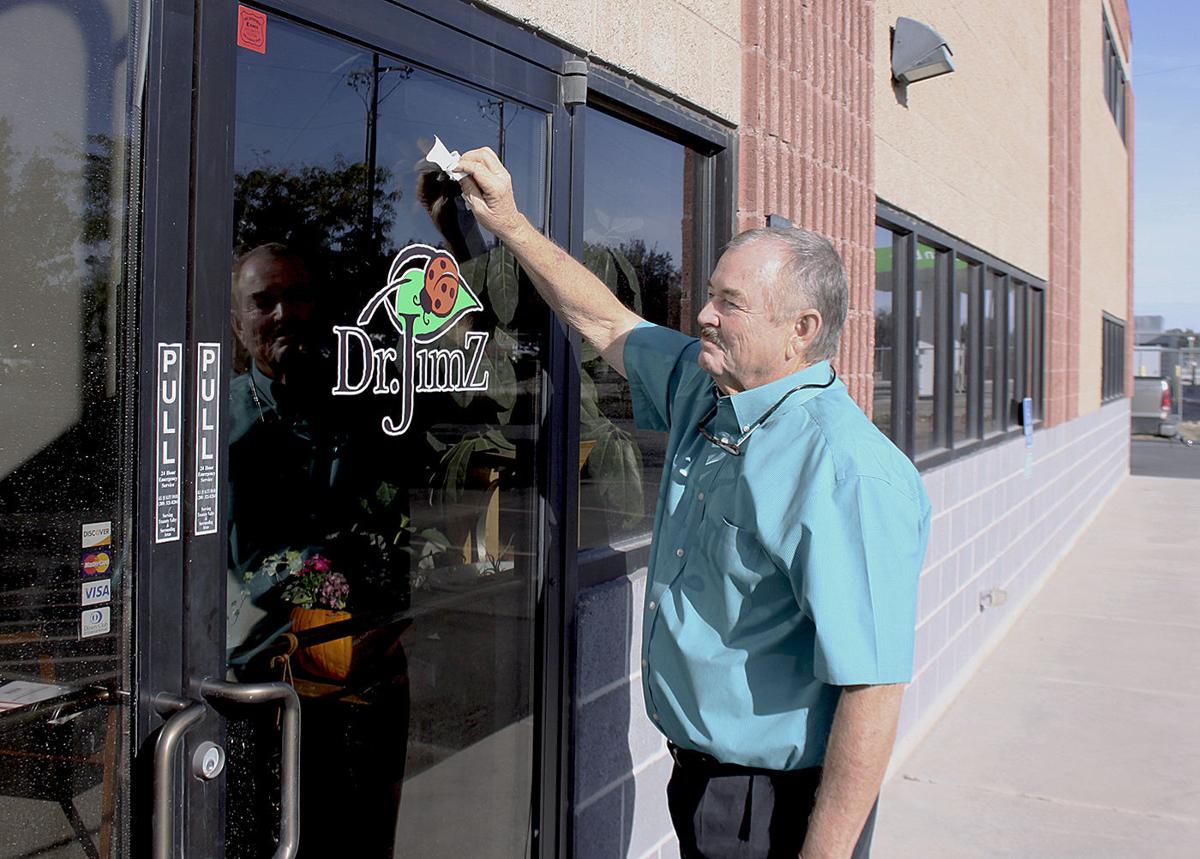 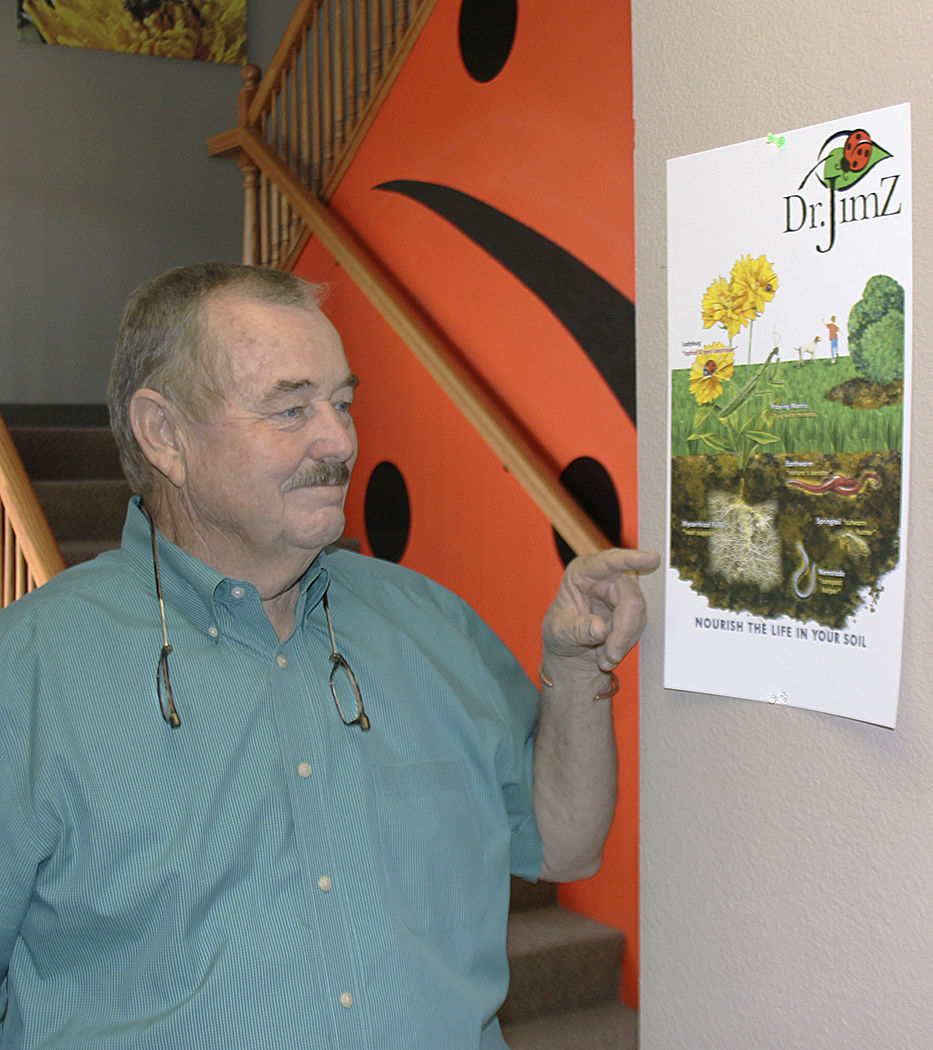 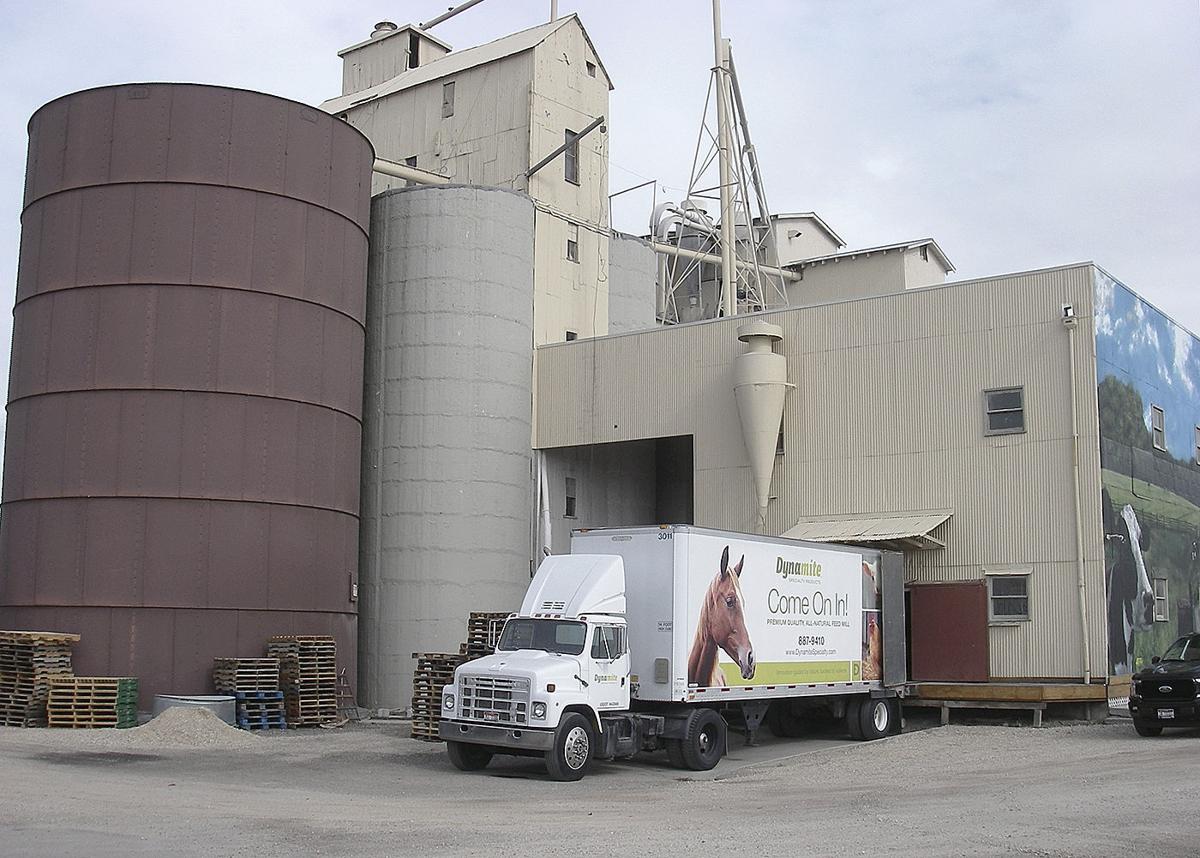 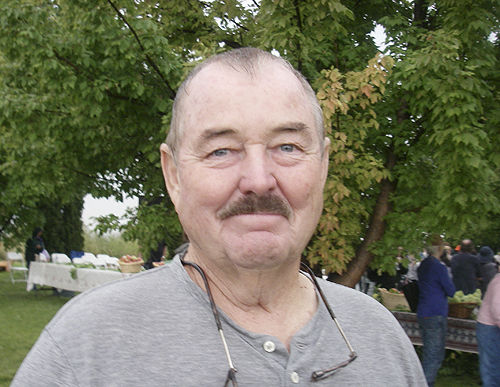 Jim Zamzow of Dr. JimZ Fertilizer Company and his 17-foot "Early Girl." The plant’s incredible size is credited to liberal applications of Zamzow’s Tomato Secret and Chicken Soup for the Soil.

NAMPA, Idaho — Jim Zamzow guides the expanding company that bears his name by digging in the dirt, working in the lab and leaving the bean-counting to someone else.

“I am a thinker and primarily a problem solver,” he said.

The board chairman of the Nampa, Idaho-based Zamzows store chain and several related enterprises succeeds by prioritizing the “customer’s customer,” whether it’s an animal’s nutritional needs or a farmer’s soil.

“My philosophy is: Everybody wins,” said Zamzow, 72.

“Create healthy soil, and in turn you are creating healthy plants that feed humans and animals,” he said.

Zamzow expects 2019 revenues of about $22 million from the stores and $8 million from sister businesses that include Dynamite Marketing, Catalyst and Dr. JimZ, a venture he formed in late 2018 to market his unique formulations of agricultural fertilizer products nationwide.

Zamzow’s focus on his customers is his trademark.

Eric Davis, whose Boise-based Retail West develops retail and mixed-use projects around the West, said Zamzows stores are tailored to what customers need.

“It is very local and very adapted to the marketplace,” Davis said. “He is more nimble than any national retailer can possibly be.”

Zamzow also donates to, and works with, nonprofits and charities effectively “because he knows his community and because he is close to his customers,” Davis said. And he has a knack for hiring good employees.

Zamzow’s son, Joshua, and daughter, Callie, serve as co-CEOs, both drawing on experience in other industries. That frees their father to think broadly about products that meet customers’ needs.

“That allows the scientist in me to come out,” Zamzow said.

He studied pre-veterinary science for three years and business for two at Boise State University, along the way earning an associate’s degree in nursing. He also took University of Idaho courses in plant protection and completed several lawn, garden and fertilizer companies’ professional certification programs.

“He has an unbelievable amount of knowledge when it comes to soil,” Knutsen said. “He is a natural scientist, so he knows a lot about human, animal and soil health.”

Soil health is a top priority, as the recent move into production agriculture reflects.

“All good nutrition feeds the soil first, the life in the soil microbes, and in turn that feeds the plant,” Zamzow said.

He takes his time identifying a need and developing a product to address it.

Knutsen pointed to Chicken Soup for the Soil, an all-natural liquid fertilizer, as an example of something Zamzow would not release until it was absolutely ready.

“Jim has been working on Chicken Soup for over 50 years and would not offer it to the public until the formulation was complete,” Knutsen said. A Midwest farmer recently bought five tanker loads of it.

Agriculture trends such as no-till and other more natural approaches figure to benefit the company’s expansion into production agriculture, as does a deep lineup of products. Zamzow also aims to bring his natural products to the golf-course industry, which he said is tough to get into.

“We can influence hundreds and thousands of people with their gardens and horticulture,” he said. “But as I realized a few years ago, if we really want to influence human health, we have to get into big ag.”

Zamzow attends and helps at Fruit Field Day each September at UI Parma Research and Extension Center. It’s a way to connect with other researchers and growers, and to monitor trends such as advancements in irrigation and soil health.

Strong population growth in southwest Idaho benefits the store chain to an extent. He sees this as an opportunity to help the new residents, many of whom come from coastal climates with different soils.

“Our products work everywhere, but ours (locally) are the most difficult soils,” Zamzow said. High pH, low levels of organic material and shallow natural topsoil are among the challenges.

“We can destroy our soil down here in three to five years” without good management, he said. Chemical usage has its place, “but it can create imbalance by overuse.”

Nic Usabel, horticulture educator with UI Extension in Caldwell, said the Zamzows business is “invested in the Treasure Valley in looking at what is needed in this particular climate and these soils, and also in working with that audience to solve problems and do some investigation.”

Zamzow said the move into the national production-ag market via Dr.JimZ shows promise, as strong early sales indicate. Natural fertilizers’ impact on the industry likely will increase over time as farmers realize their potential, he said.

He plans to increase Dr.JimZ’s manufacturing and storage capacity, and eventually add facilities elsewhere in the U.S.

“Soil is either getting better or getting worse,” Zamzow said.

“I want to affect human and animal nutrition through soil health,” he said. “We can only get health from nutrition, and good nutrition only comes from healthy soil. From life comes life.”

Hard workZamzow’s research-first and customer-centric approaches recall the way his grandparents ran the business on starting it 86 years ago.

August “Gus” and Carmalita Zamzow founded it in west Boise in 1933 as Zamzows Mill, soon rebranding it Zamzows Coal & Feed. They sold it after World War II to their sons, Bernard and Stanley, who also acquired and renovated two other feed mills in the area.

In the mid-1960s, Bernard bought out Stanley’s interest. Bernard’s sons, Jim and Rick, in the early 1970s took over operations and expanded into the lawn-and-garden segment as well as pet foods and supplies. They added and renovated more stores, and developed new fertilizers. They bought Zamzows Inc. from their father in 1978. Jim acquired Rick’s interest just over five years ago.

“When Rick and I got heavily involved in the early ‘70s, the Treasure Valley started shifting from rural to urban,” Jim Zamzow said. “All the places that were dairy farms over in Ada County (Boise area) were now becoming subdivisions.”

As longtime gardeners themselves, “we just had to start teaching it to the public and provide the products to support them.”

“A lot of the transition was from feeding hogs to feeding dogs,” he said.

One fundamental principle they got from their parents and grandparents: Work hard for the customer.

While more challenges lie ahead, Jim, who lives in the Boise suburb of Eagle with his wife, Faye, remains confident.