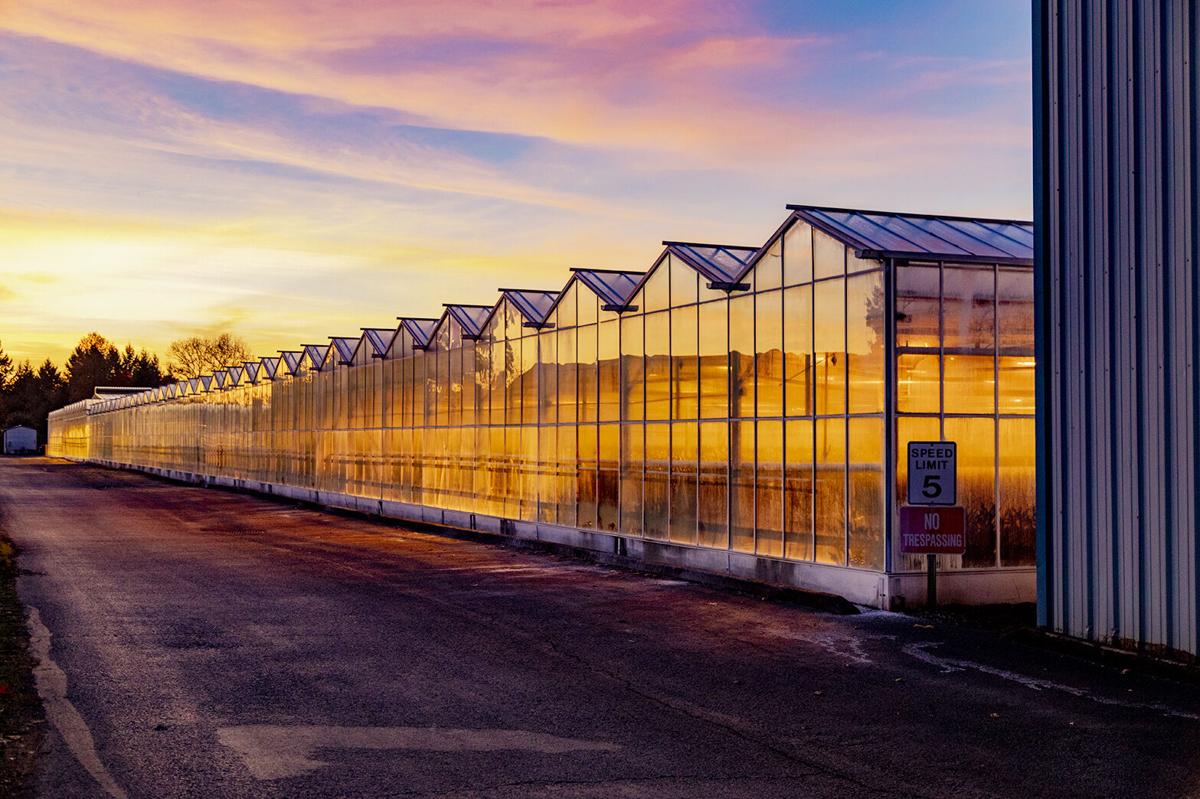 A row of Oregon Flowers greenhouses lit from the inside. 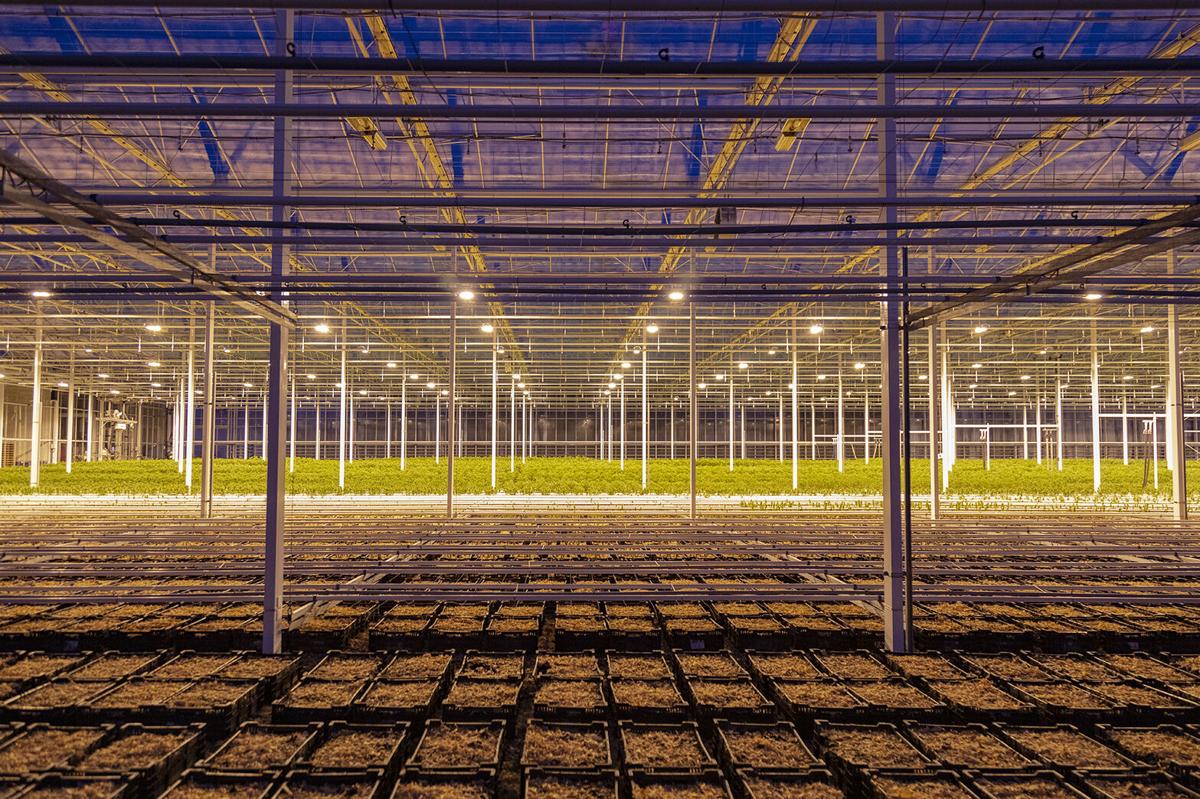 An Oregon Flowers greenhouse at night. 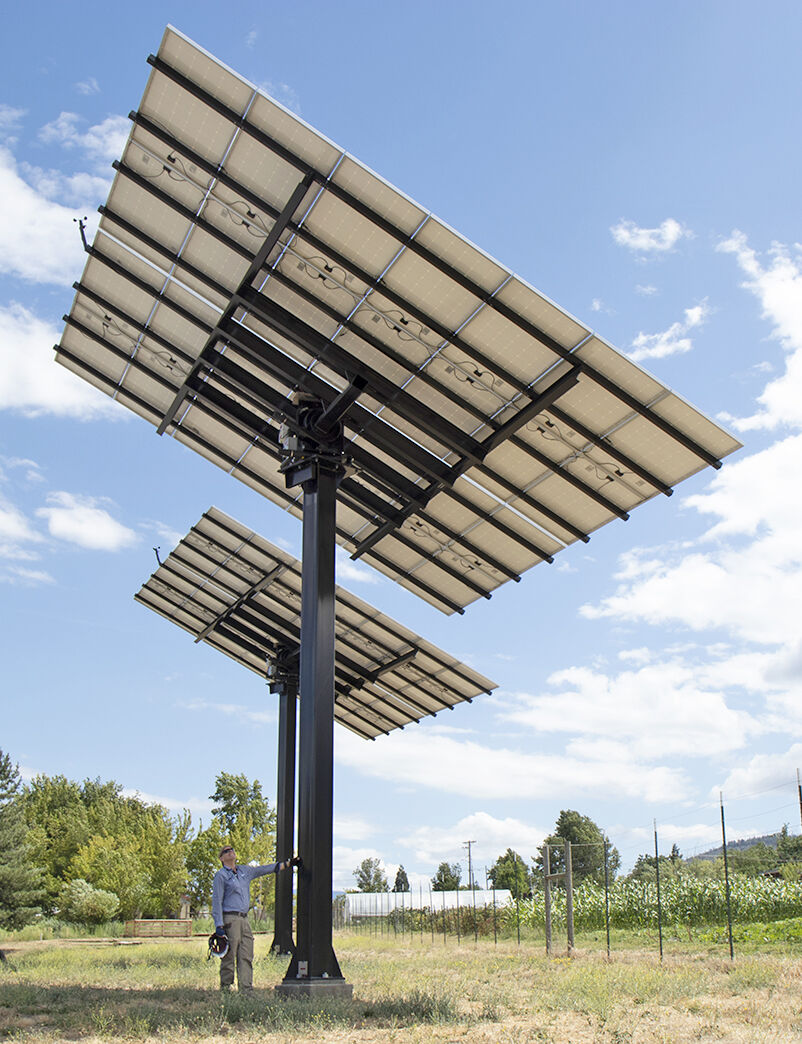 Jeff Sharpe of STracker in Ashland, Ore., stands next to raised solar panels. Raising them allows room for farmers to plant crops or run livestock in the shade they create. 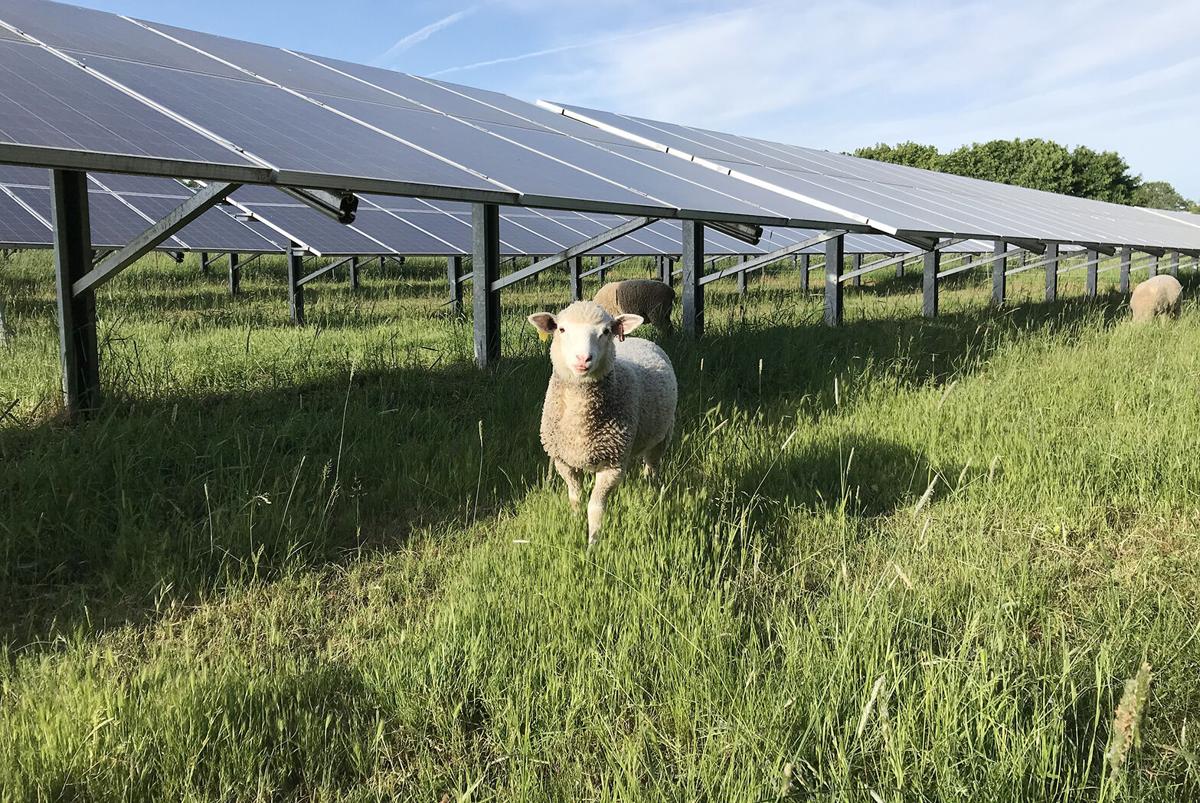 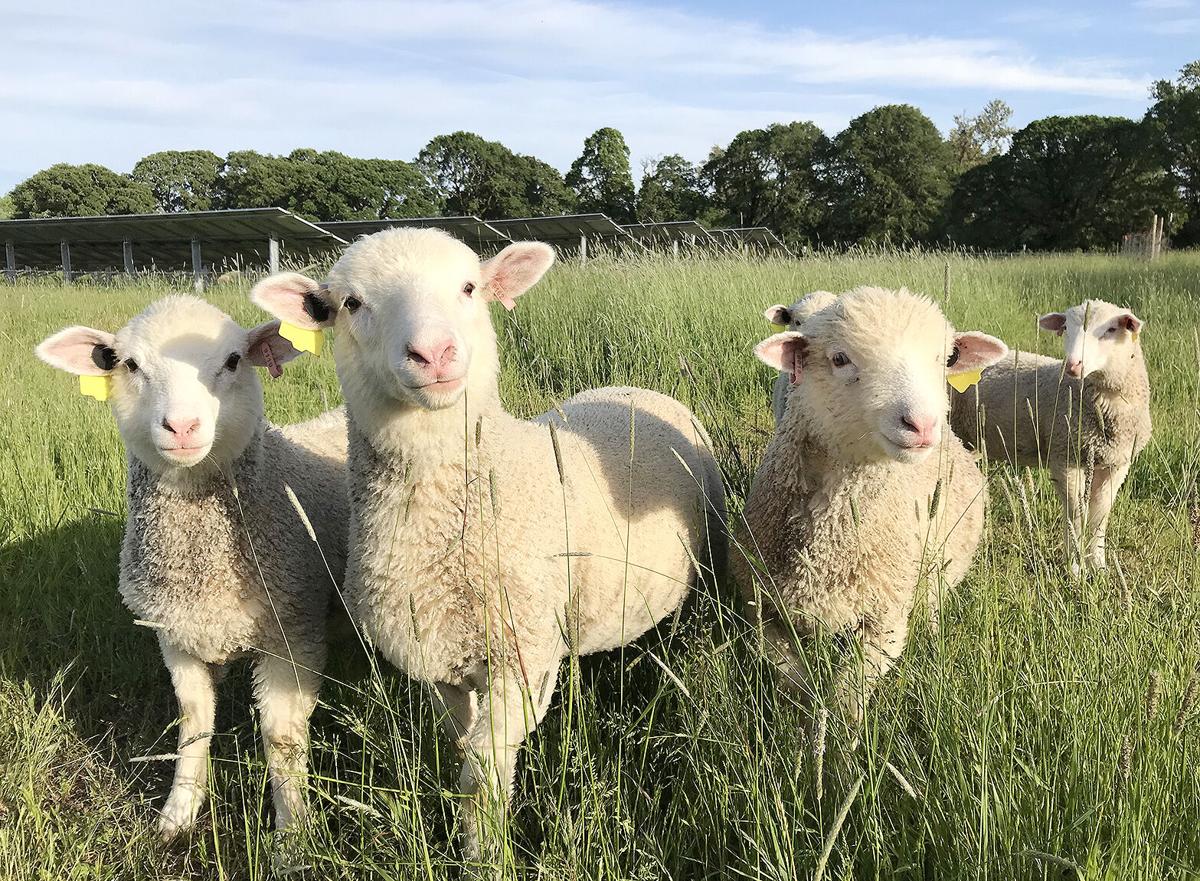 Sheep during an Oregon State University study with solar panels in the background. 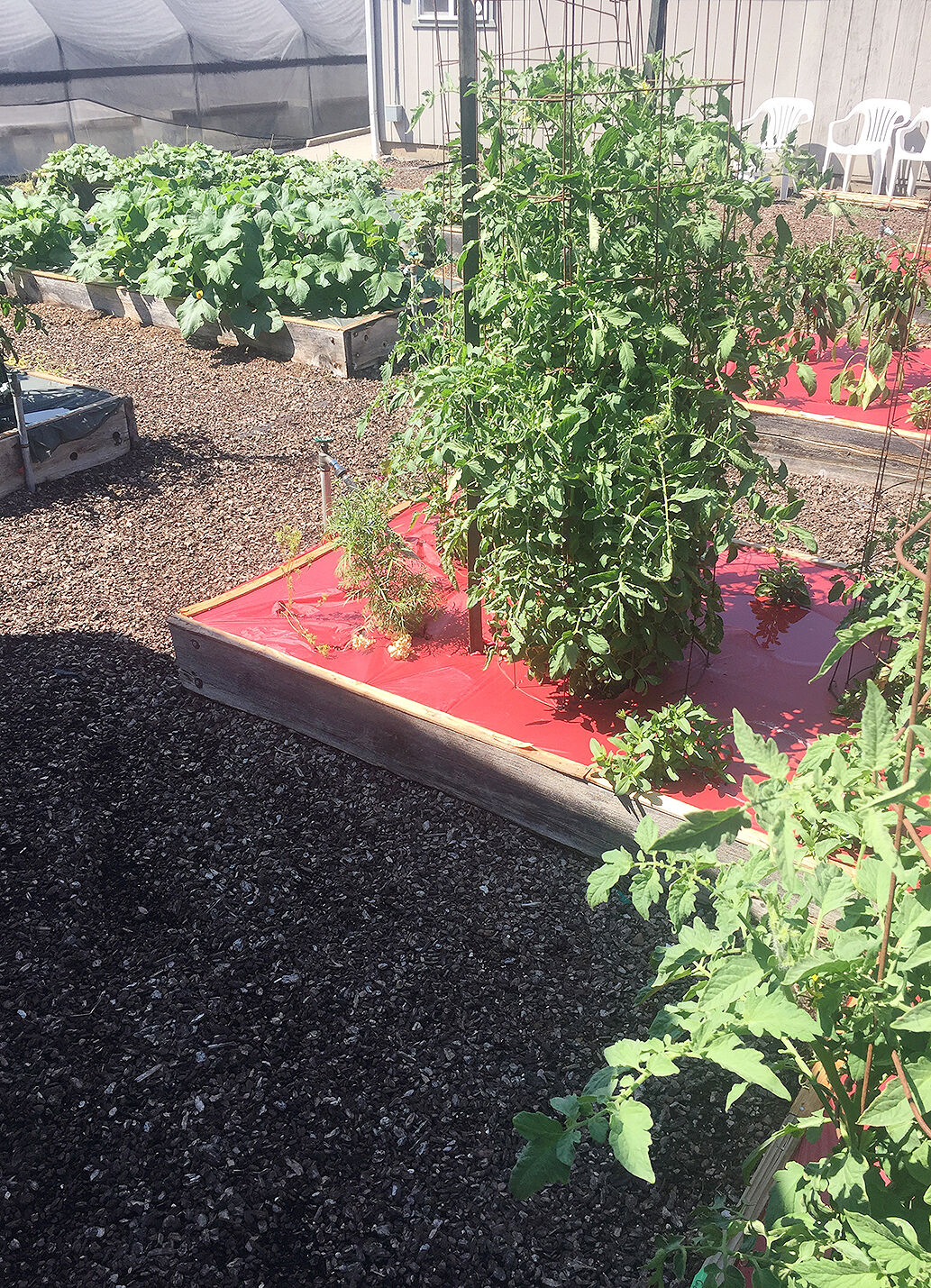 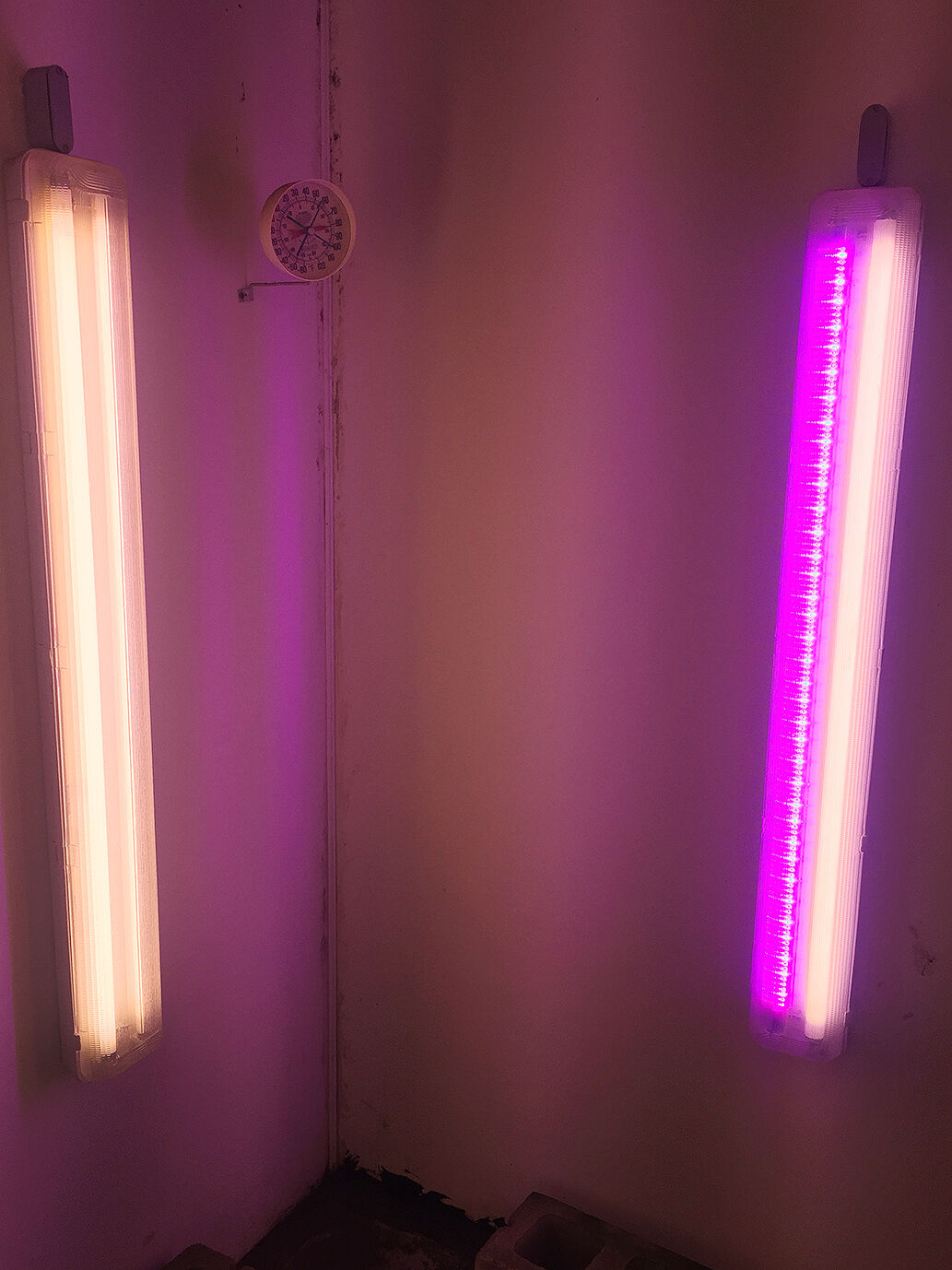 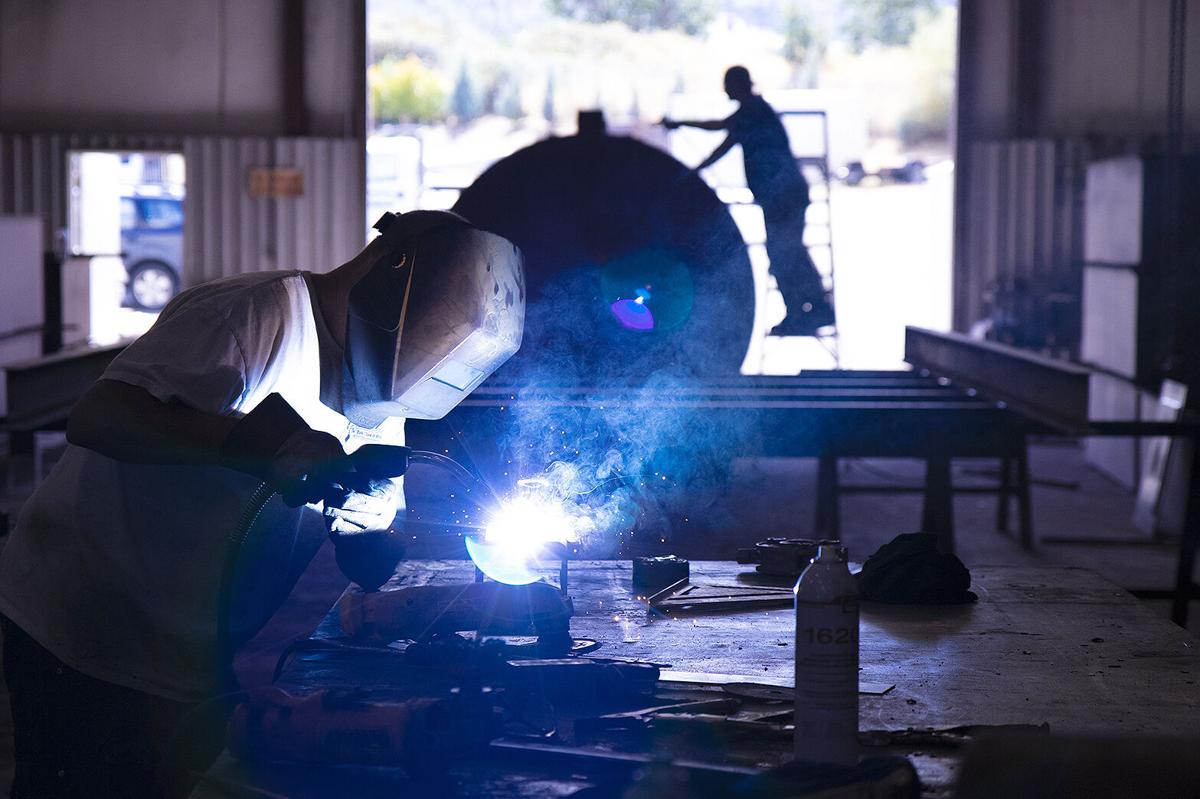 A worker welds in a solar panel manufacturing facility. 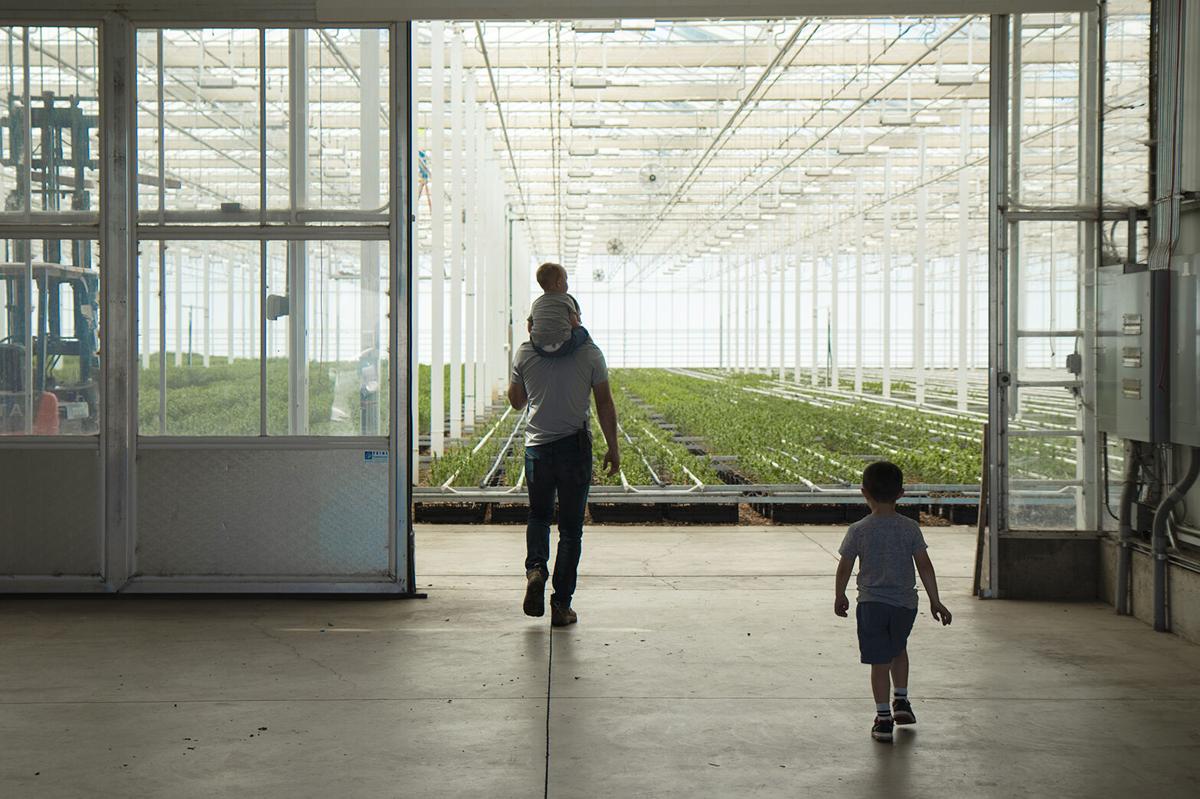 Tyler Meskers and two of his kids head into a greenhouse. 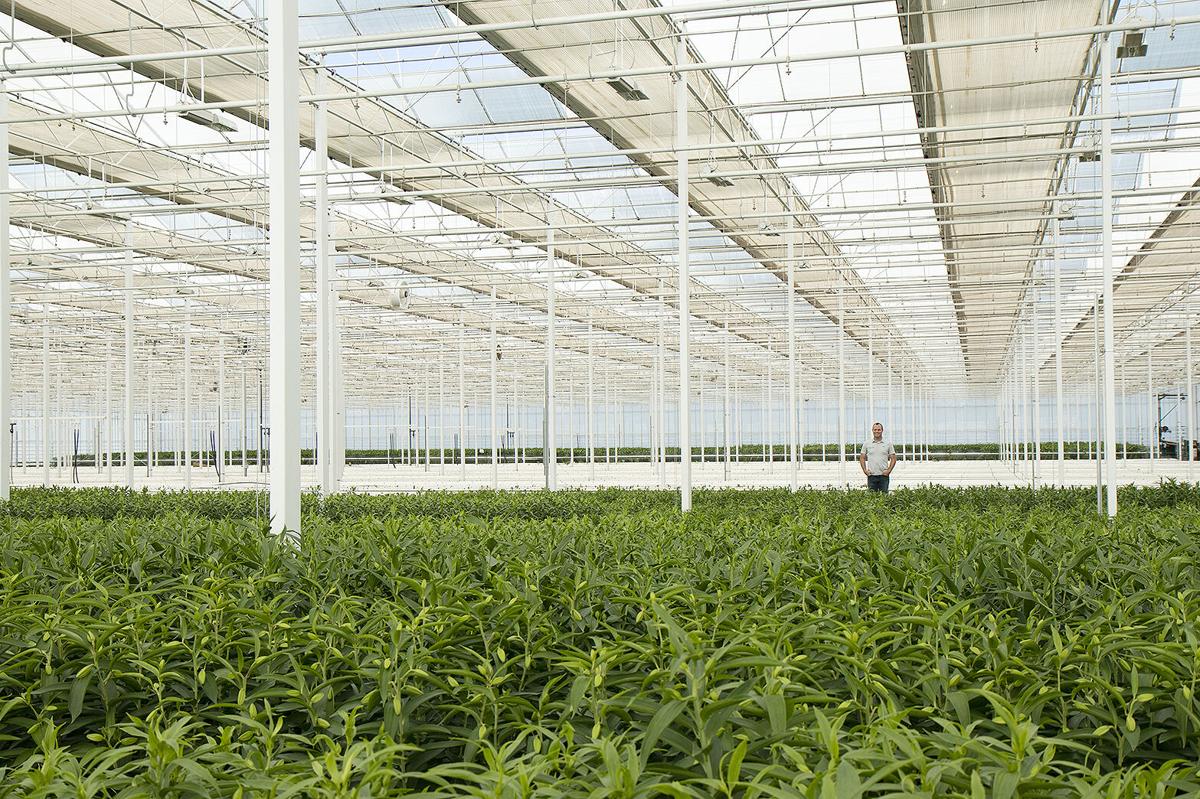 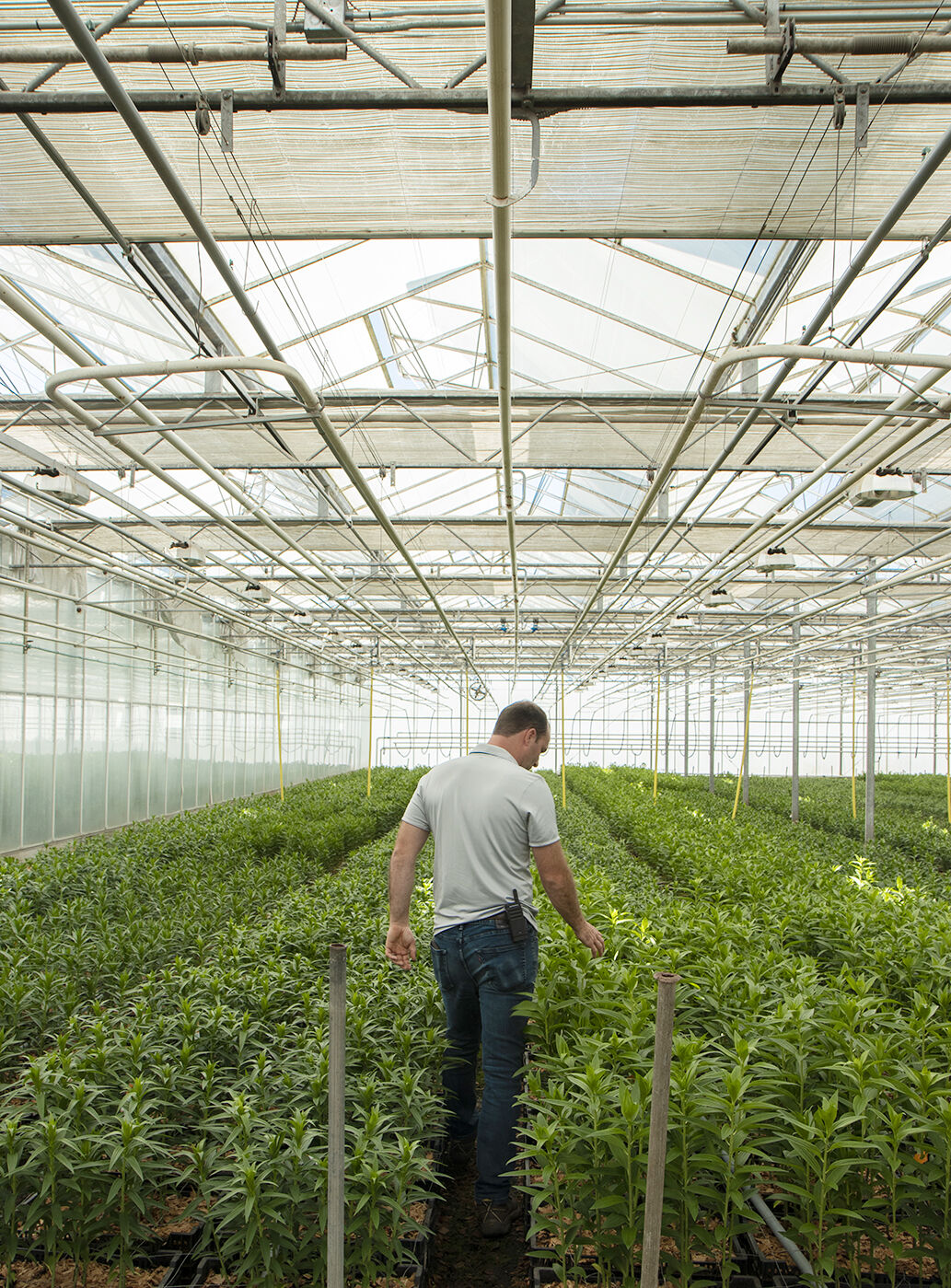 Tyler Meskers walks down a row of lilies in his greenhouse. 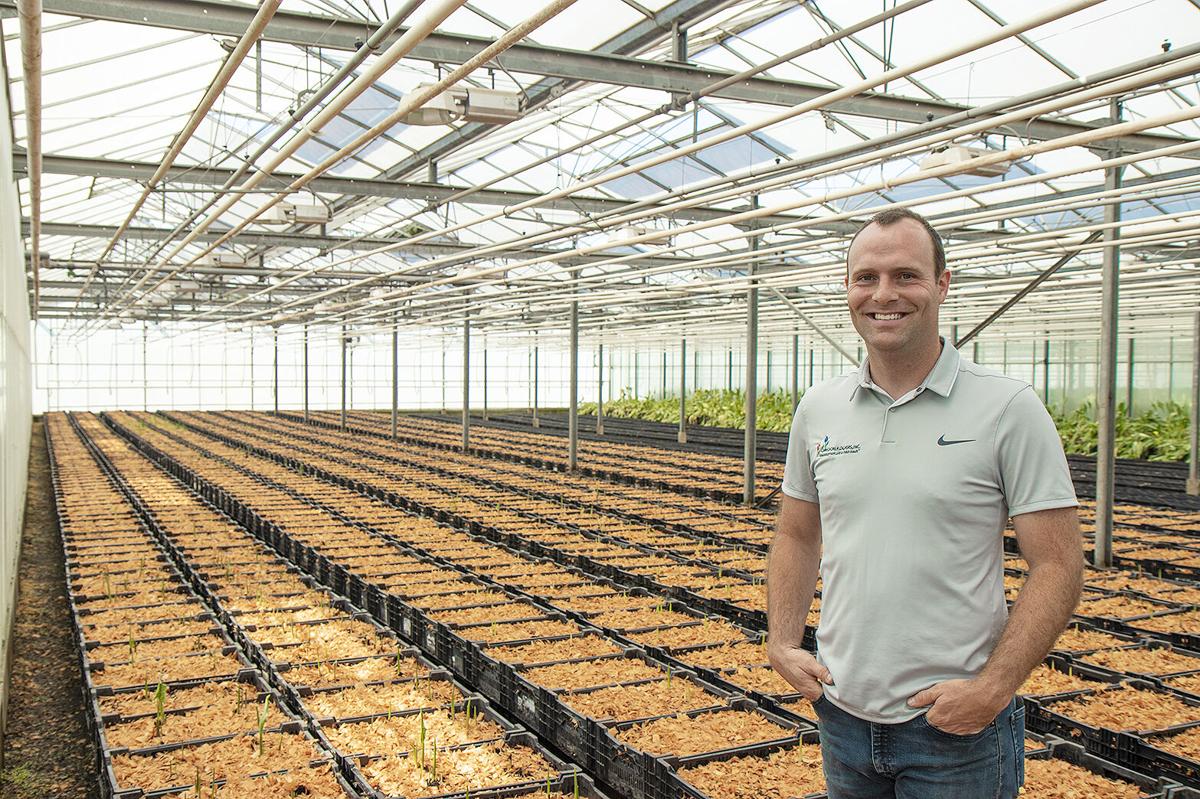 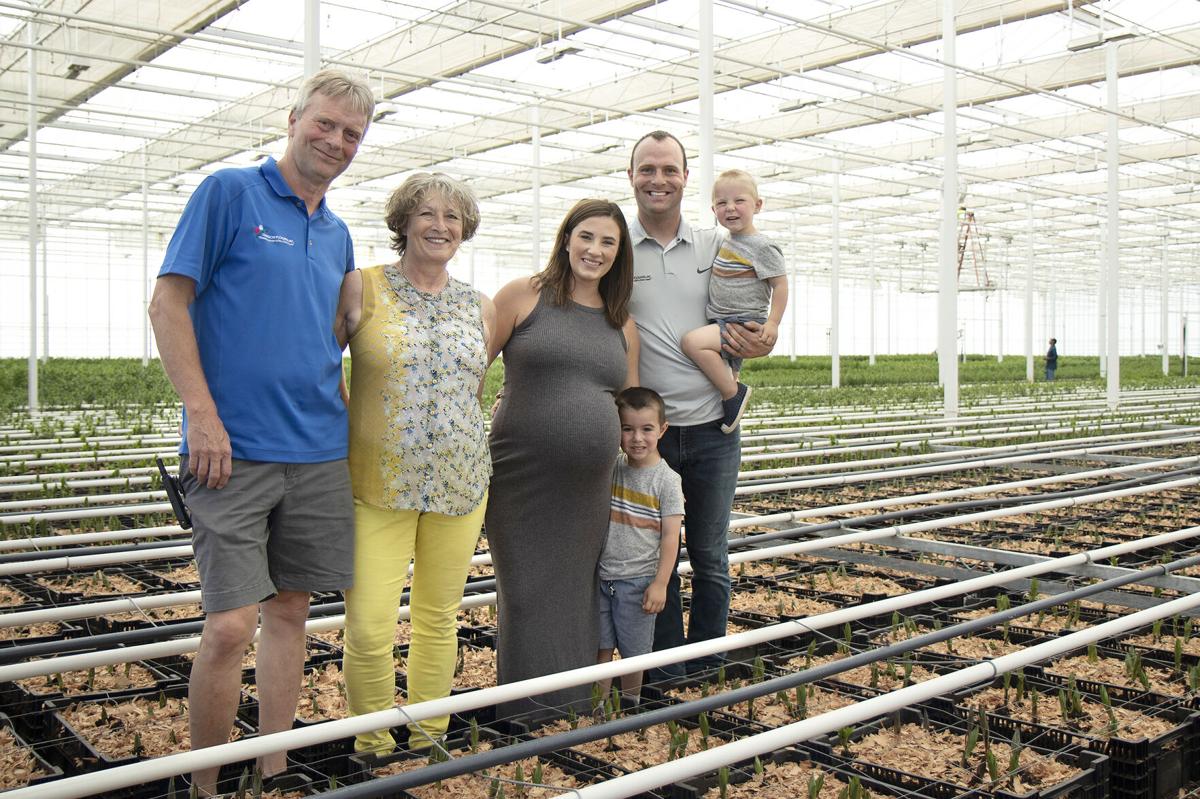 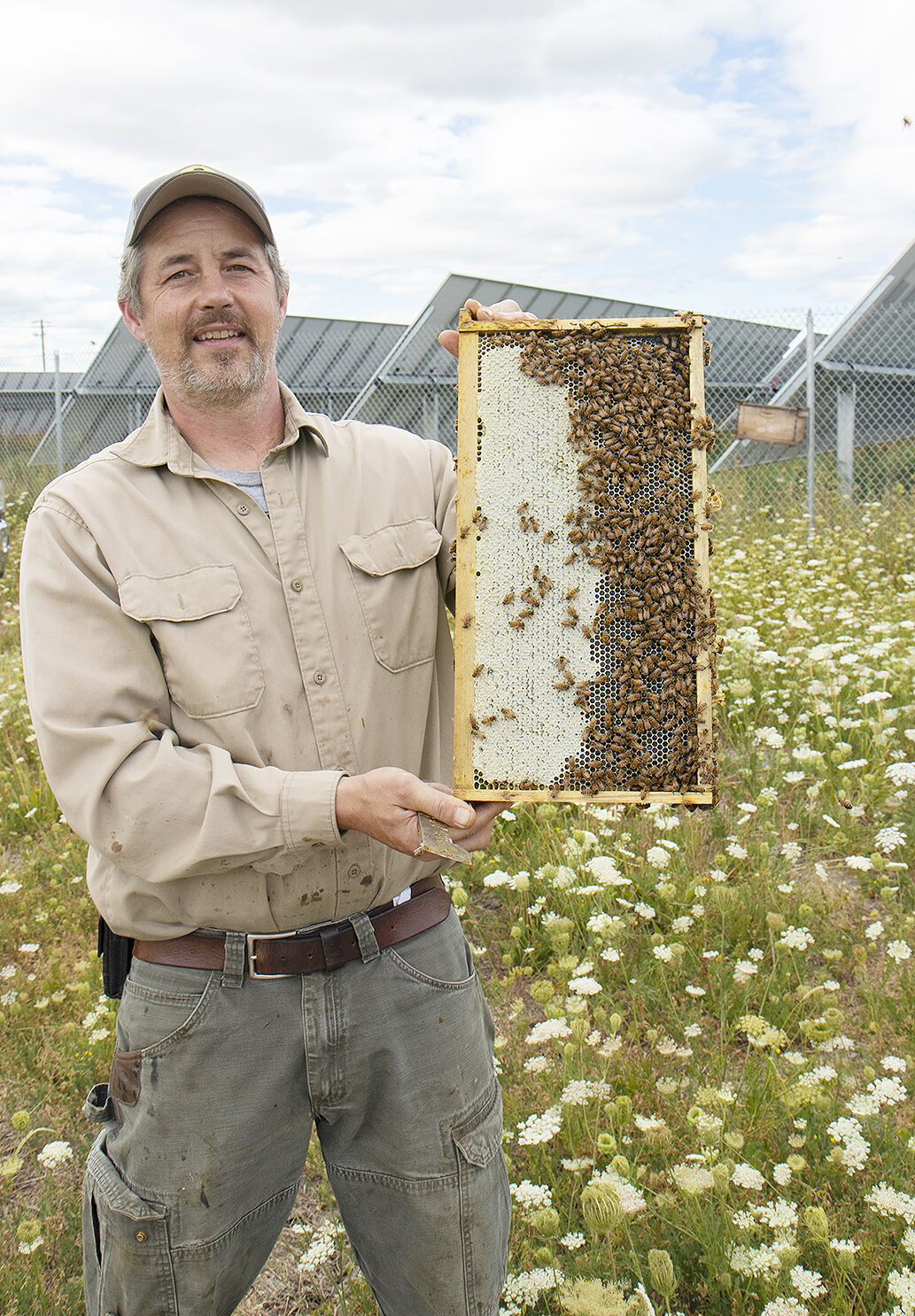 John Jacob, beekeeper and owner of Old Sol Apiaries, holds a panel of honeycomb and bees in front of solar panels. 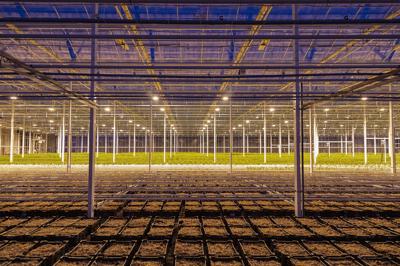 A row of Oregon Flowers greenhouses lit from the inside.

An Oregon Flowers greenhouse at night.

Jeff Sharpe of STracker in Ashland, Ore., stands next to raised solar panels. Raising them allows room for farmers to plant crops or run livestock in the shade they create.

Sheep during an Oregon State University study with solar panels in the background.

A worker welds in a solar panel manufacturing facility.

Tyler Meskers and two of his kids head into a greenhouse.

Tyler Meskers walks down a row of lilies in his greenhouse.

John Jacob, beekeeper and owner of Old Sol Apiaries, holds a panel of honeycomb and bees in front of solar panels.

AURORA, Ore. — Tyler Meskers poked his finger into half-frozen soil. Dwarfed by towers of potted lily bulbs, he stood in a giant freezer that smelled like spring.

But it wasn’t spring. It was a 95-degree summer day.

Meskers, vice president of Oregon Flowers Inc., a cut flower business in Aurora, was trying to replicate the seasons in chilled warehouses. And in his glass greenhouses — some of the largest in the state — he and his family were trying to harness and replicate the sun itself.

The Meskers family is among a group of innovators pushing light to new levels in agriculture. Because of advancements in knowledge and technology, both indoor and outdoor farmers are finding creative ways to manipulate light to increase yields, alter plant color and flavor and make shade their ally.

Plants convert light into energy through photosynthesis. But there is much more to light than meets the eye.

According to Andrew McAllister, a University of Michigan applied physicist, plants use light to “decide” which direction to grow, what size to make leaves and when to flower.

There are different kinds of light, McAllister explained in a study, meaning different wavelengths. To our eyes, longer wavelengths appear red and shorter wavelengths violet. There is also light our eyes can’t see, that we only feel. Wavelengths longer than red, called infrared light, make us feel warm. Wavelengths shorter than violet, called ultraviolet, make us sunburn.

Matthew Jones, photobiologist at the University of Glasgow in Scotland, told the Capital Press that in general, blue light makes plants shorter, while red light makes them taller.

“I think it’s all very exciting,” said Jones, whose accent betrayed his British origins. He was sitting in his Glasgow office, jammed all around with books, papers and a scribbly white board. “The challenge is figuring out how it works in the real world.”

In the Netherlands, farmers have rapidly adopted controlled-environment agriculture, or CEA. They grow high-value specialty crops year-round in illuminated greenhouses.

And in South Korea, farmers have grown strawberry plants indoors using colored lights. With the right color ratios, they were able to alter the flavor and make the berries grow faster or slower.

Even those who prefer traditional agriculture say there is untapped potential in light research.

Enveloped by hills in Grants Pass, Ore., Greenleaf Industries, a nonprofit nursery that hires developmentally disabled adults and donates produce to charities, is known for its colored lights and materials.

Black and green cloths are standard, he said; they retain heat in the soil.

Greenleaf Industries uses some LED lights, but mainly relies on plant aquarium bulbs. Smith said as each old bulb dies, it is replaced by a new LED, one at a time rather than an all at once.

That’s because the specialized LEDs are expensive. Smith recalls spending $934 on his last four-foot LED.

Many growers and researchers told the Capital Press LED lights are preferable because they can be “tuned” to emit precise wavelengths, are energy-efficient, don’t generate as much heat and are long-lasting.

But the cost of LEDs is just one challenge with light-controlled agriculture.

Some researchers criticize indoor farming. For one, they say, how can growers compete when the sun is free? Even enthusiastic CEA proponents say the sun can’t truly be replicated.

But beating the sun at its own game isn’t the point. McAllister of the University of Michigan said indoor farms can be closer to urban areas, grow reliable crops despite unreliable climate and weather, allow farmers to grow at a time of year when they otherwise couldn’t and offer a high degree of control.

One remarkable innovation, he said, involves tricking plants into “thinking” they’ve received more hours of daylight than they actually have.

Many plants need a long period of daylight — which can be expensive to emulate inside a greenhouse. A recent experiment, Jones said, found growers can turn off lights earlier in the evening, then give plants a one-hour pulse of light in the middle of the night, which makes plants behave as though they’d received a full day of light, saving energy costs.

With knowledge and technologies like LEDs, Jones said he expects the field will grow.

But not every innovator uses LEDs.

The Meskers’ business model is built on providing fresh-cut, American-grown flowers when most people aren’t growing them and demand is high, such as around Valentine’s Day.

According to a 2019 report from USDA’s National Agricultural Statistics Service, the wholesale value of domestically produced cut flowers was $374 million, 77% of which is from California.

“We live and breathe our flowers,” said Tyler Meskers.

He was walking down the aisle of a greenhouse, one son perched on his shoulders and the other tagging alongside. This was the same aisle where Meskers had learned to ride his bike as a boy, the same aisle his father had built as a young immigrant.

Meskers’ father, Martin, the company’s CEO and president, is a third-generation Dutch bulb farmer. In his early 20s, he moved to the U.S. for a job and later started a business.

“I don’t know anything else. As kids we worked on the farm,” he said.

He still carries his Dutch accent.

When he started his business, he asked his then-sweetheart and now-wife Helene to join him. She was also from Dutch flower stock; her family was in the bulb business, too.

“I wasn’t sure if I wanted to come. But I love it here,” said Helene, now the CFO of Oregon Flowers.

When the Meskers family started the business, they dreamed of building greenhouses with glass, which allows more sunlight to filter through than plastic.

But glass is expensive, and securing a loan wasn’t easy.

At age 26, the day after his baby girl was born, he went to a bank again asking for a loan. The bank staff was so amazed he’d left his newborn to seek their backing that they finally took him seriously.

The Meskers say the cut flower industry has faced ups and downs, but because of the company’s innovations, their markets have remained strong.

One such experimental field is called “agrivoltaics.”

At the intersection of farming and solar energy, historically a place of conflict, renewable energy leaders and farmers are developing partnerships and finding, quite literally, common ground.

Dual-purpose solar sites — for agriculture and energy production — are gaining popularity in Italy, Germany and Japan, but are still a rarity in the U.S.

Chad Higgins, professor of biological and ecological engineering at Oregon State University, is one of the nation’s leading agrivoltaics experts.

In one study, Higgins found the shade created by solar panels tripled water use efficiency in a sheep pasture.

This summer, Higgins’ research team completed another study with sheep grazing among panels. Early results show the lambs drank less water in the shade, preferred to graze underneath the panels, appeared less stressed and the pasture had a higher stocking rate.

Higgins said landowners can also benefit from lease payments from energy companies; experts told the Capital Press they have seen lease rates range from $800 to 1,500 per acre per year.

Solar energy companies want to use farmland because it tends to be flat, pre-disturbed and deep-soiled. Solar panels actually “prefer” temperate farm conditions because panels are usually made of silicon, the same material computer chips are made of, that doesn’t perform well if too hot or wet.

But agrivoltaics has its challenges.

Higgins said the “biggest impediment” is liability; there aren’t yet many laws in place to govern what happens when a farmer damages a panel or a panel injures a farmer.

Another challenge is that in some states, particular counties allow solar panels on high-quality farm soil classes, while others do not.

Also, Higgins said, most companies build panels with energy production as the primary goal and overlook landowners’ needs. Higgins said he believes panels should designed with the farmer’s needs in mind — such as being able to pass underneath with a tractor.

“It’s like Yoda: ‘unlearn what you’ve learned.’ These solar arrays don’t look anything like what you’ve seen before,” said Higgins.

One hot afternoon at STracker’s solar panel manufacturing shop in Ashland, Ore., blue and gold sparks flew from the welding table. The shop buzzed. Jeff Sharpe, the company’s engineer, dismounted his yellow bike and strode across rust-colored iron shavings to a pile of equipment.

Sharpe is a second-generation solar business owner. After spending a decade farming in Montana, Sharpe saw the need to bridge the gap between agriculture and energy.

Some producers, however, need panels raised, but only a few feet off the ground.

John Jacob, CEO of Old Sol Enterprises and president of the Oregon State Beekeepers Association, said managing his beehives near solar panels has been a game-changer.

Jacob keeps some of his hives in White City at a solar site owned by Pine Gate Renewables. The ground under the panels is carpeted with native plants and flowers for the bees.

Jacob said because the shade from the panels keeps things blooming, his bees at this site produce twice as much honey as those elsewhere. The hives also produce stronger queen bees. And working with Pine Gate Renewables, Jacob said, allows him to lock more land into long-term agricultural use.

“I know not everybody thinks solar panels are pretty, but from my point of view, beauty is in the eye of the bee-holder — pun intended,” he said.

Both indoors and outdoors, more farmers are innovating with light. Researchers predict that as knowledge and technology grow, the next generation of agriculturalists will push the boundaries of light even further.

In his largest glass greenhouse — 107,639 square feet — Tyler Meskers stood beside his two boys and his wife, Megan, who was pregnant with their third child.

“I’m glad they get to grow up this way,” he said. “And who knows how agriculture and technology will change for them.”

Farmers or landowners interested in working with Pine Gate Renewables on a dual-use agriculture and solar energy project on their land can submit an inquiry to: https://pinegaterenewables.com/landowners/

This initiative by Pine Gate Renewables is called SolarCulture(TM).

Claudia Weeks, site operations manager for Pine Gate Renewables, said many factors are considered for each solar project – including topography, soil conditions, nearby electrical infrastructure and if that region is expecting solar power – but farmers are always invited to ask about collaborating.

Gov. Brown: Oregon to lift most COVID-19 restrictions when 70% of residents vaccinated

State fairs are back — but get ready for changes