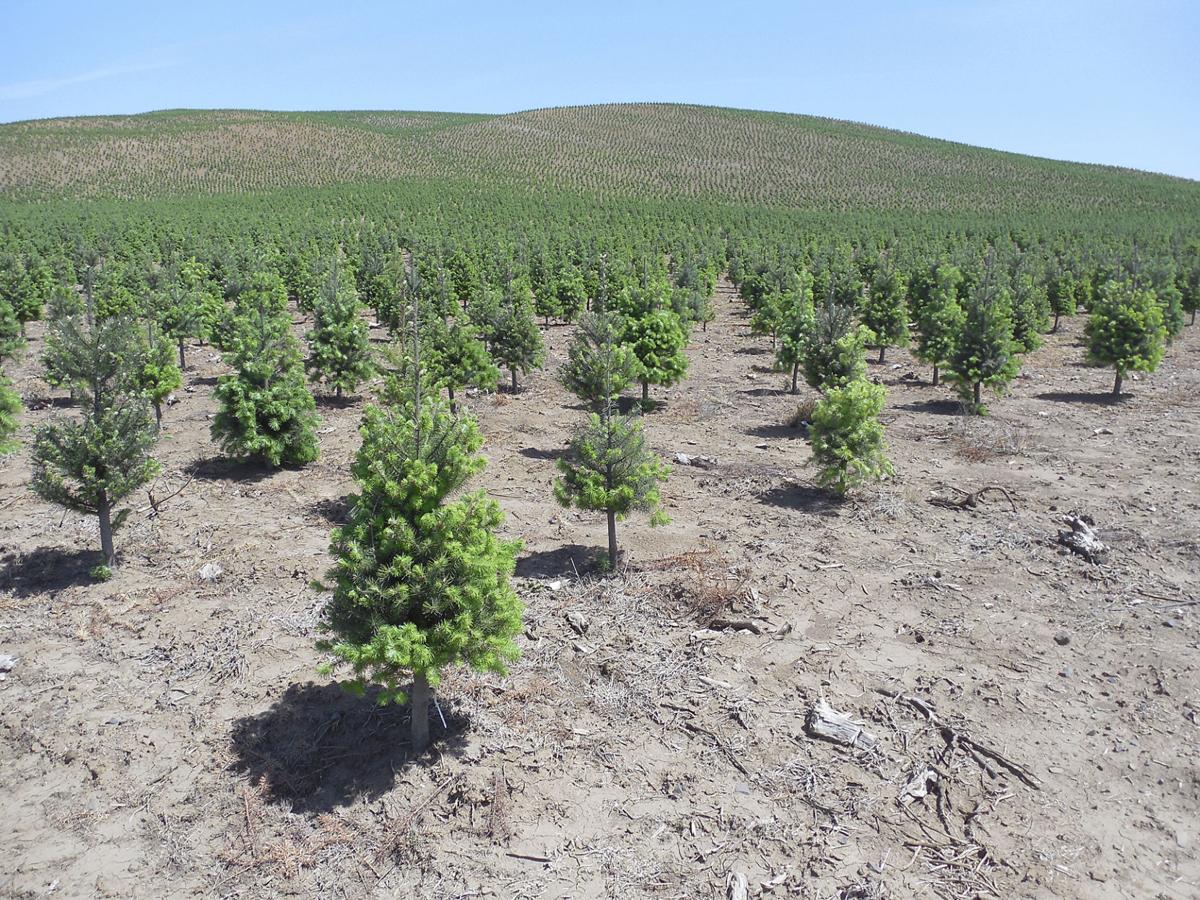 Christmas trees climb a hillside along the eastern rim of the Willamette Valley. 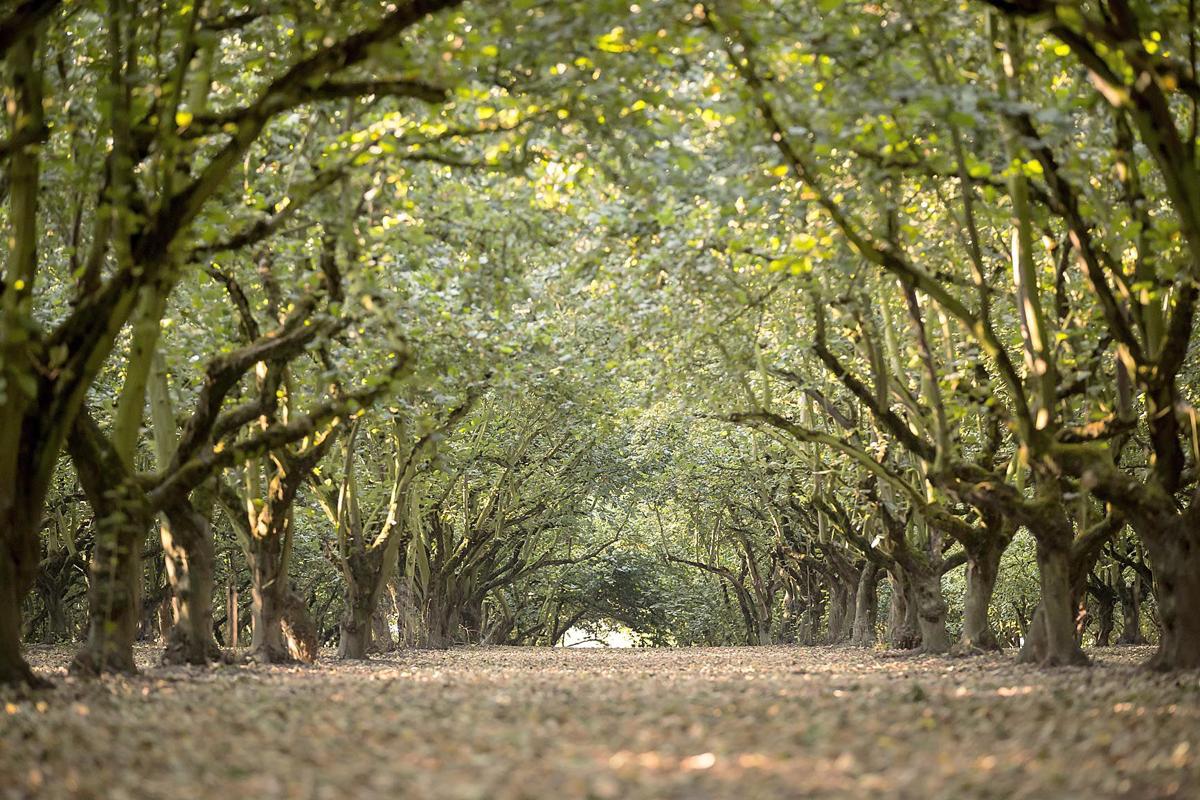 Willamette Valley hazelnut trees crowd out the sunlight. This year’s crop will be slightly smaller than last year’s, the USDA predicts. 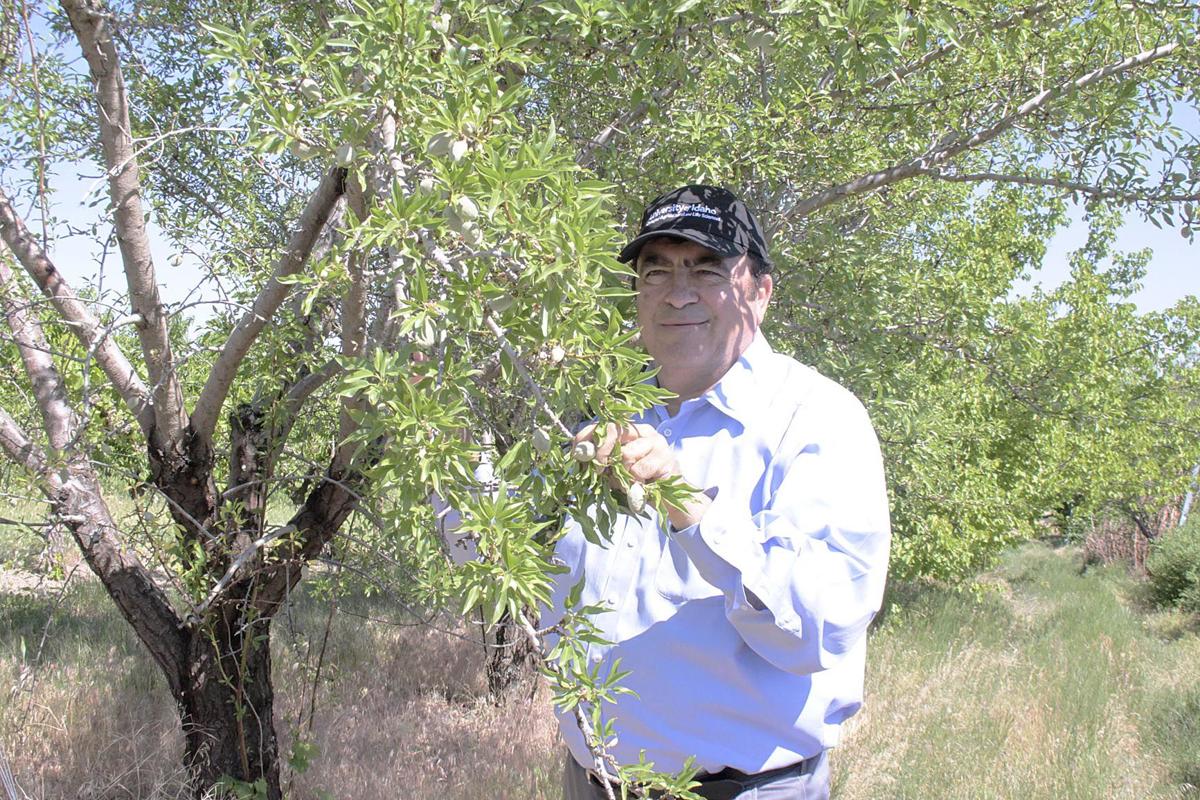 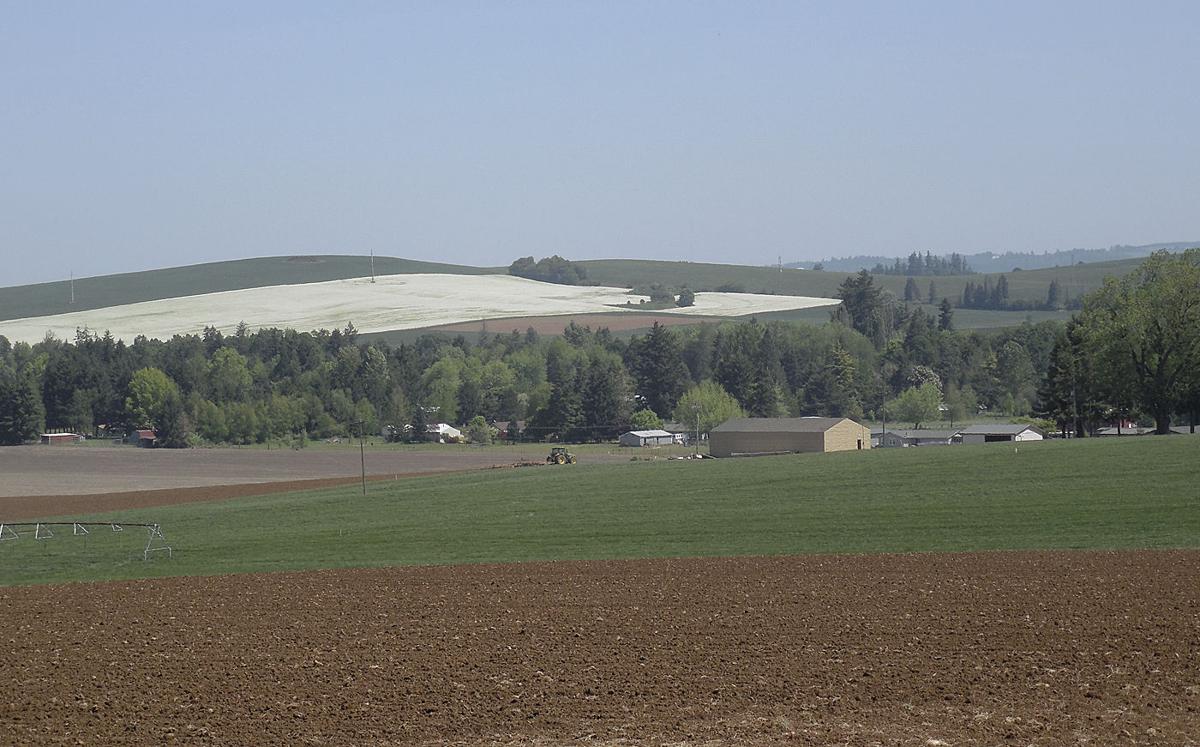 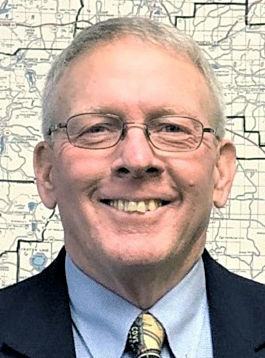 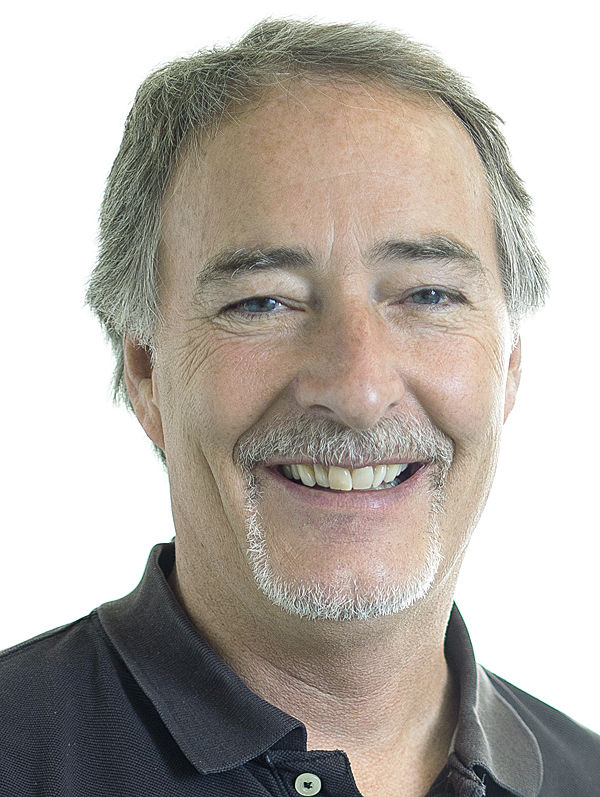 Idaho sugar beet and potato grower Duane Grant, chairman of the Amalgamated Sugar board of directors. 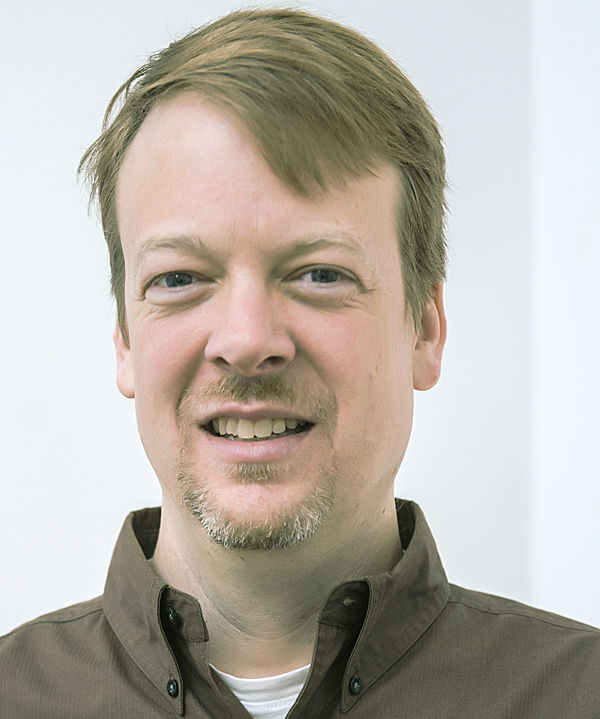 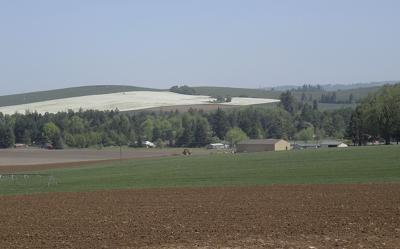 Christmas trees climb a hillside along the eastern rim of the Willamette Valley.

Willamette Valley hazelnut trees crowd out the sunlight. This year’s crop will be slightly smaller than last year’s, the USDA predicts.

A drive through Oregon’s Willamette Valley will quickly convince any Midwesterner that agriculture in the Pacific Northwest is far different from the Corn Belt.

Rows of hazelnut trees line up next to fields of Christmas trees, and grass seed fields are surrounded by blueberries — more than 200 different crops are grown in the sprawling valley that stretches 110 miles between Eugene and Portland in Western Oregon.

In Washington state, hop yards, vineyards and tree fruits such as apples, cherries and pears dominate vast swaths of the countryside, while in Idaho the southern one-third is dotted by potato and sugar beet fields.

Comparing the Northwest to the Midwest, with its vast landscape dominated by commodities such as cattle, corn, soybeans and wheat, the conclusion becomes inescapable: You’re not in Kansas anymore.

That diversification of crops — including an abundance of specialty crops — characterizes Northwest farming, the latest Census of Agriculture shows. North and east of the Willamette Valley lie vast stretches of wheat, potatoes, onions and other more typical row crops, but it’s the variety that most stands out.

Barry Bushue, USDA Farm Service Agency state executive director for Oregon, said the Northwest is fortunate to have such diversification. But he’s quick to point out that other states, which produce the lion’s share of commodity crops such as corn, soybeans, wheat and cotton, have a huge impact on the nation’s economy.

“The beauty of agriculture is that across the United States, we have the ability to produce a wide range of commodities,” he said. “We have states that provide the very core of agriculture — producing commodities like corn, wheat, soybeans and livestock — and we have areas that can specialize in a wider range of crops.”

Substantial precipitation and moderate temperatures help Oregon and Washington growers produce specialty crops. The region produces nearly all of the nation’s hops and hazelnuts, and most of its Christmas trees and grass seed.

Bushue said that in addition to the Northwest’s moderate climate west of the Cascade Mountains, abundant water and good soil allow farmers to grow a huge variety of crops.

Kansas underscores the contrast between the specialty crops grown in the Northwest and commodity farming found in the Midwest. Some farmers there are diversifying, but high-volume production of a handful of nationally vital crops remains job one.

For example, in 2017 Kansans grew 19.9 million acres of wheat, corn, soybeans and sorghum — 91% of the state’s harvested farmland, according to the ag census. On top of that, more than half of the state’s farm gate is cattle.

Kansas Farm Bureau Commodities Director Mark Nelson said more of that state’s farmers are growing vegetables for farmers’ markets and even retail stores. He also sees more production of forages and niche grass-fed cattle in the last few years, particularly in light of trade tensions that have added a large dose of uncertainty to overseas markets.

But the percentage gain in vegetable production likely isn’t above the U.S. average, and is less prevalent on the state’s west side, where population centers are farther away, he said.

None of these developments likely will change the agricultural profile of Kansas much, Nelson said.

“Clearly corn, sorghum and wheat are staples here, and always will be,” he said.

Another commodity crop is also gaining popularity among the state’s farmers, Nelson said.

Cotton acreage has more than doubled in the last three to four years — 96,521 acres were grown in 2017. The reasons: cotton varieties resistant to herbicide became available, and the crop’s price hasn’t been battered as severely as the prices of wheat, corn and soybeans, he said.

“We had hogs, corn and soybeans until about the 1980s. Then, you had to go big into hogs or you got out,” he said. “My family got out of hogs and that was OK. Just corn and soybeans alone were enough to have a good-sized operation and make a good living, at least in the Corn Belt.”

“Of course, they are having big problems now” marketwise, Reimer said. “Corn and soybean prices are terrible. It’s a very dire situation, though there are still quite a number of operators with a tremendous amount of assets.”

In contrast, he once visited the Albany, Ore., farm where one of his OSU students grew up. The mostly irrigated farm grew 17 crops, all requiring different types of management. The crops were mint, sweet corn, radish for seed, blueberries, Chinese cabbage for seed, coriander and cilantro for seed, wheat, hazelnuts, rye grass for seed, barley, sugar beets for seed, oats, green beans, meadowfoam for seed, fescue grass for seed and Bok choi for seed.

“This is a good-sized, prosperous farm,” Reimer said. “What struck us was how hard people work. This is a very labor-intensive type of farming, so there are just a lot of decisions to make and employees to manage every day.”

That sort of crop diversification helps the Northwest farm economy, he said.

“My sense is that we are in a better economic situation — prices haven’t gone as low as, say, corn and soy,” Reimer said.

The Willamette Valley, with its mild winters and dry summers, works well for growing seed, he said. Southwest Idaho is a major seed producer as well.

Much of the Willamette Valley’s soil features glacial lake deposits from the Missoula Floods that followed the last Ice Age. Coarser sediment was deposited first, leaving finer material to settle farthest away from the rupture of ice dams holding back lakes in what is now Montana and Canada.

“From Portland down to Eugene, you get finer, heavier-textured soils,” said Cory Owens, Oregon state soil scientist with the USDA Natural Resources Conservation Service. These soils are rich and dark with plenty of organic material.

Red soils, which were not influenced by the lake deposit, appear above about 350 feet of elevation, she said. This area is well suited to trees, and most recently, winegrapes.

“Because of our rich soils and climate, we are able to grow such a diverse amount of specialty crops,” Owens said. Another factor is that the valley’s approximately 40 inches of rain each year falls mostly from October to June rather than in the warmest months, she said.

In Oregon, hazelnut production leads the nation by a wide margin, according to census figures, and it’s still growing. Acreage nearly doubled to 68,378 in 2017 compared to 2012.

In Washington state, apple acreage continues to increase beyond the 179,899 acres of orchards in 2017.

In Idaho, new crops are continuously being added to the 335,042 acres the state devotes to its famous potatoes. Almond trees have been grown for several years at the University of Idaho’s Parma Research and Extension Center’s experimental orchard.

“We had less frequent damage on almonds than apricots, and that was promising,” UI pomologist Essie Fallahi said.

Warm days and cool nights aid various Idaho vineyards and tree fruits, though there is a risk that fall can bring an early frost, he said.

Nevertheless, many visitors have been pleasantly surprised at how well these crops perform in southwest Idaho, Fallahi said.

“We are particularly getting a lot of people from California,” he said, including some commercial growers considering diversifying their land holdings geographically.

“Spots where they do well are many times along some of these ancient glacial floods,” he said. The floods carved ground — improving drainage — and removed some clay so water could penetrate more deeply and pooling could be reduced.

Hop production has also caught on in Idaho. Though it’s a distant second behind Washington state’s 38,679 acres, Idaho has 9,641 acres. Oregon ranks third in hops at 8,298 acres. All three states have added acres in recent years.

“We get a lot of questions about the (acreage) growth here,” farmer and Idaho Hop Growers Association President Michelle Gooding said. “It has been quite a bit from where we were.”

Areas close to the 45th parallel grow hops well, and in southwest Idaho, “we have the right altitude and climate, and the water supply,” she said.

Visitors to southeastern Oregon and southwestern Idaho are surprised by the large total volume of onions the region produces, said Grant Kitamura, an Oregon Board of Agriculture member and partner in Baker & Murakami Produce, a major onion packer-shipper in Ontario, Ore.

“They can’t believe we are isolated and yet have this major agricultural industry, the onion industry,” Kitamura said.

Dell Winegar, a Fruitland, Idaho, grower of onions, beets, and some corn and wheat, said vegetable, specialty and seed crops fetch more revenue per unit than many commodities but come with higher input costs.

The area gets a foot of rain per year, mostly in the cold months, he said.

“The strong impression I get is that people are surprised at the concentration of the kinds of unique crops we grow in the Magic Valley up and down the river,” said Duane Grant, who grows sugar beets and potatoes in Idaho’s south central and southwest regions.

“When you take someone who is not from the area and take them into a potato cellar that has enough potatoes in it to feed New York City for a week, they are just blown away,” Grant said.