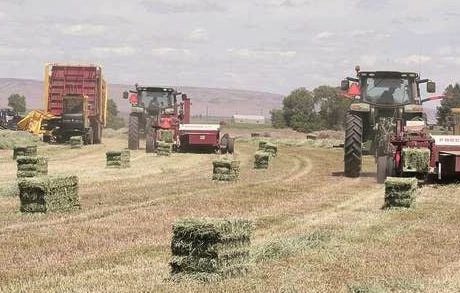 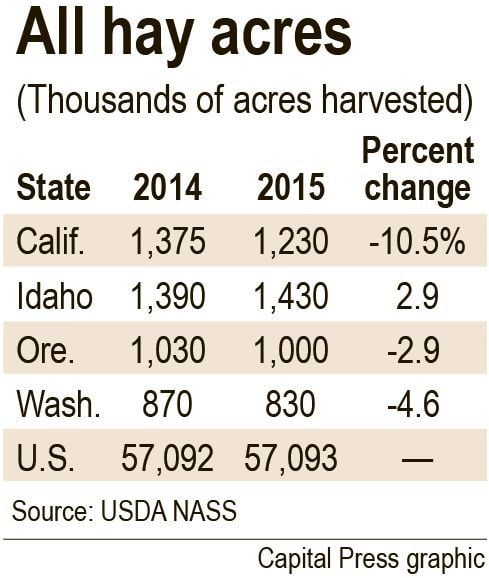 While harvested hay acres are expected to remain stable across the U.S. in 2015, growers in the West see challenges ahead.

Nationwide, producers expect to harvested 57.1 million acres of hay, virtually unchanged from 2014. But harvested acreage is expected down 11 percent in California, 5 percent in Washington and 3 percent in Oregon, according to the USDA National Agricultural Statistics Service prospective plantings report released on March 31.

On the flip side, Idaho’s harvested hay acres are expected to be up 3 percent.

Western hay growers say they are bracing for challenges — from pest pressure and water shortages to port challenges and weaker milk prices.

Abundant rains in Idaho last year ruined the second cutting and had a negative effect on third-cutting yield and quality. It’s hard to predict what this year will bring, said Will Ricks, an Eastern Idaho grower and president of the Idaho Hay and Forage Association.

Heavy rains last August allowed fungal spores to accumulate in soils and plant material, and growers are bringing in quite a bit of sick alfalfa with various fungal and crown diseases, said Glenn Shewmaker, extension forage specialist with the University of Idaho in Twin Fall.

He’s seeing damage from clover root curculio larvae and even alfalfa weevil, which is making a “very early” appearance on abnormally warm temperatures since January, he said.

The amount of disease and vole damage this spring is more than he’s ever seen, he said.

Early hatching mosquitoes are also an indication that pests — such as alfalfa weevil, thrips, cutworms, and aphids – could be a problem this year, he said.

Water will be another issue, with much of southwest Oregon pretty dry. Those areas will run out of snowpack supplies in early June, affecting grass hay — mostly harvested by cattle — unless late snow storms come through, he said.

The backlog of hay exports, due to what was essentially a strike by longshoreman, and milk prices that have dairymen struggling to break even will also be an issue this year, he said.

Washington growers are also concerned about the carryover of hay stocks due to the port slowdowns and lower milk prices, said Loren Lopes, a Clayton grower and president of the Washington State Hay Growers Association.

Water could also be an issue for hay growers in south-central Washington who depend on snowpack in the Cascade Mountains, said Shawn Clausen, a Warden grower.

Timothy hay acres in the state are also likely to be down due to the substantial price drop on last year’s second cutting, he said.

The California Alfalfa and Forage Association has not yet returned calls, but severe drought and water restrictions leave little surprise as to lower expectations for the state’s harvested hay acres.