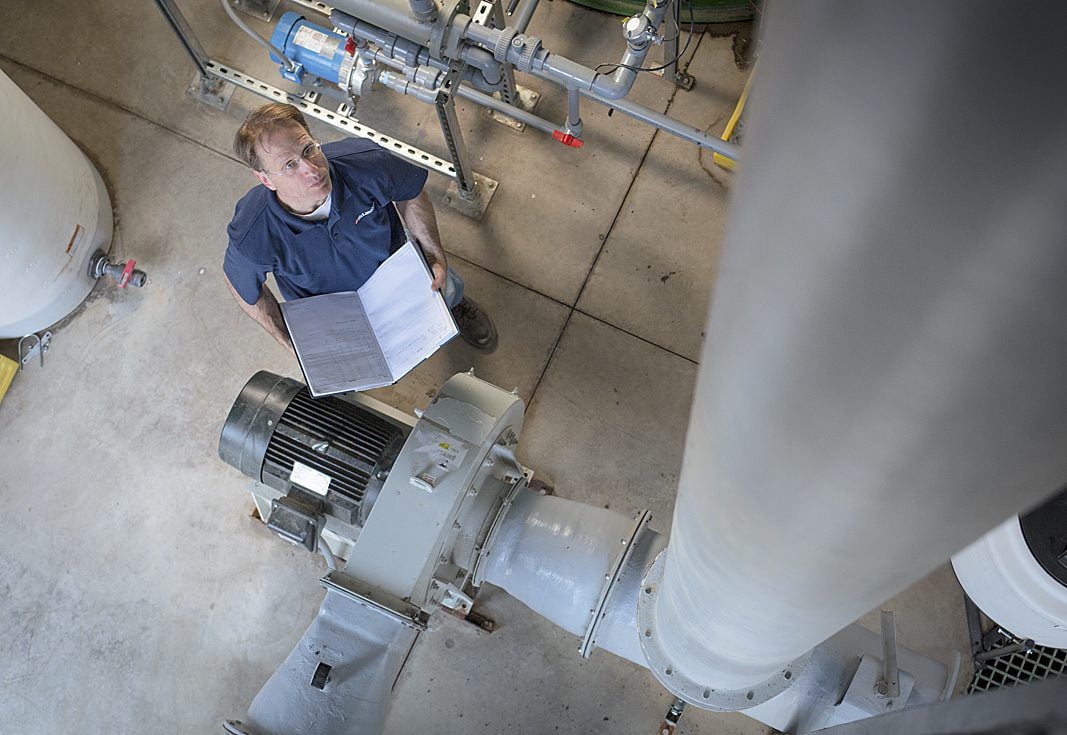 Jim Wallace stands adjacent to the air stripping/absorption system. This system removes ammonia from the water. Ammonia is captured in a concentrated form as ammonium sulfate. 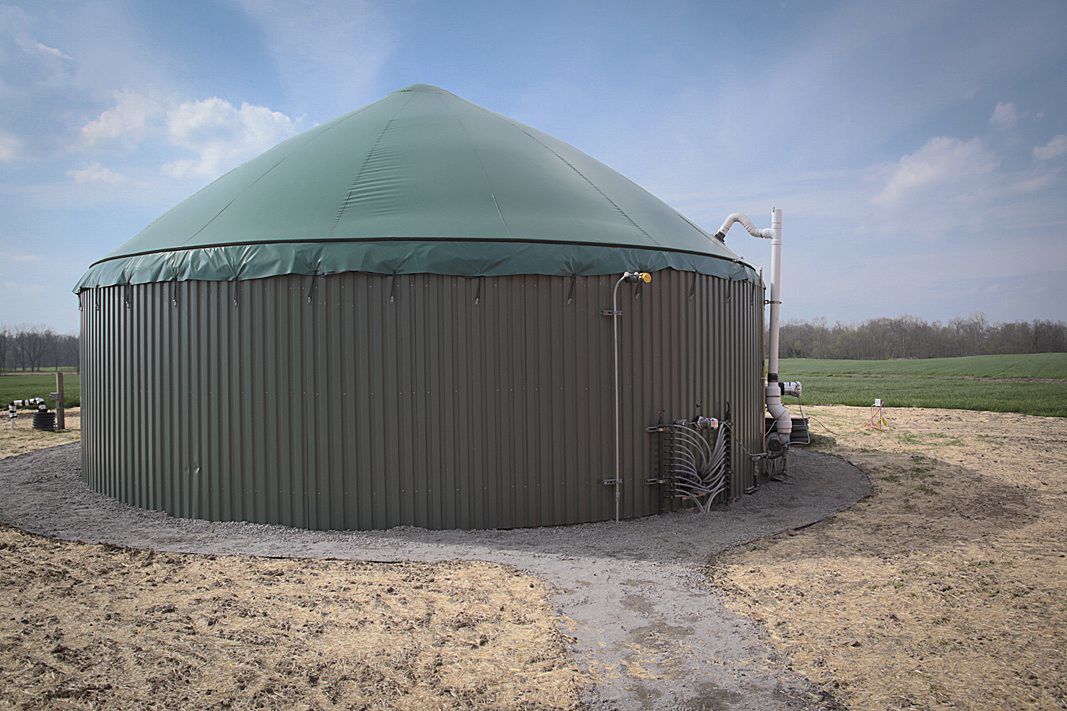 Anaerobic pretreatment tank. This is the first step in the process. The anaerobic process acts to breakdown solids and create a homogenous feedstock to the ultrafiltration system. Biogas is also generated which has energy value.

Jim Wallace stands adjacent to the air stripping/absorption system. This system removes ammonia from the water. Ammonia is captured in a concentrated form as ammonium sulfate.

Anaerobic pretreatment tank. This is the first step in the process. The anaerobic process acts to breakdown solids and create a homogenous feedstock to the ultrafiltration system. Biogas is also generated which has energy value.

Technology aimed at increasing the quality of water extracted from manure — at a rate of 50 gallons of clean, reusable water from 100 gallons of liquid manure — will soon be available for use on dairy farms.

The system, rooted in Michigan State University research, couples an anaerobic digester with an ultrafiltration, air stripping and reverse osmosis system. The result is water clean enough for livestock to drink. The goal is to increase the rate of clean water recovery to 65 gallons per 100 gallons of liquid manure.

At some point, the ability to reuse water from the manure on the dairy for watering cows becomes the Holy Grail, particularly in arid regions, said Steve Safferman, associate professor of biosystems and ag engineering at Michigan State University, which initiated the research about nine years ago.

In addition to water recovery, the separation system extracts nutrients from the manure that can be applied to land as fertilizer, he said.

The initial goals of the research were to improve anaerobic digestion and improve the quality of water exiting the system. Researchers found there wasn’t a direct benefit on microbial activity without other technological components, but they did find the system could improve water quality and extract nutrients, he said.

The beauty of the system, he said, is able to separate and concentrate nutrients while producing clean water.

Environmental engineer Jim Wallace, a former MSU student who worked on the project and earned his doctorate from MSU, has continued development and commercialization of the system with McLanahan Corp. of Hollidaysburg, Pa.

The McLanahan Nutrient Separation System begins with a pre-treatment tank, an anaerobic digester that generates biogas and energy and separates out solids, he said.

From there, the water stream moves to an ultrafiltration membrane that separates by particle size, removing phosphorous and organic nitrogen. The water moves downstream to an air stripping system that removes ammonia and combines it with water and sulfuric acid to capture the ammonia as ammonium sulfate, which is a substitute for commercial fertilizer.

The water is then treated by reverse osmosis, a process that separates based on molecular size, producing potassium and clean water. That clean water is suitable for direct discharge or other uses such as irrigation, Wallace said.

Manure has always been used as a resource, but increasing consolidation of animal agriculture makes it more challenging for farmers to manage the resource, he said.

“It really comes down to how nutrients are managed on the farm by segregating and concentrating nutrients so they can be used where and when they’re needed. As well as adding value to water, in a sense we improve the cost structure of dairy farming,” he said.

Cost of the system is hard to pin down because of all the variables in farm operations, but a reasonable ballpark figure would be in the range of $500 per cow, Wallace said.

The cost of simply moving liquid manure from storage to land application runs 1 to 2 cents per gallon, and cows generate 35 gallons of liquid manure a day, he said.

Doing the math, a 3,500-cow dairy would generate nearly 45 million gallons of liquid manure a year. Multiplied by 1.5 cents per gallon, it would cost nearly $671,000 per year to move that manure. At $500 per cow, the separation technology would cost $1.75 million.

The take away is that the capital and operating costs of the system can potentially be offset by savings from moving the manure, electricity generation, capturing ammonia that would otherwise be lost to the atmosphere, and enhanced nutrient use, Wallace said.

For a 3,500- cow operation, the system would require a 60 foot by 80 foot building to house the ultrafiltration, air stripping and reverse osmosis system. An anaerobic digester would be housed outside, Wallace said

The first commercial push will be with McLanahan’s dairy clients, but there is also application in the hog industry, he said.

Tying the separation system to anaerobic digestion makes a lot of sense, creates a synergy in manure management, but McLanahan is also evaluating how a non-digester stream would perform, he said.

“I do think that’s conceivable … we’re still a few months from that answer,” he said.

For view a video on the system:

R-CALF leader to ranchers: Get active in fixing cattle market