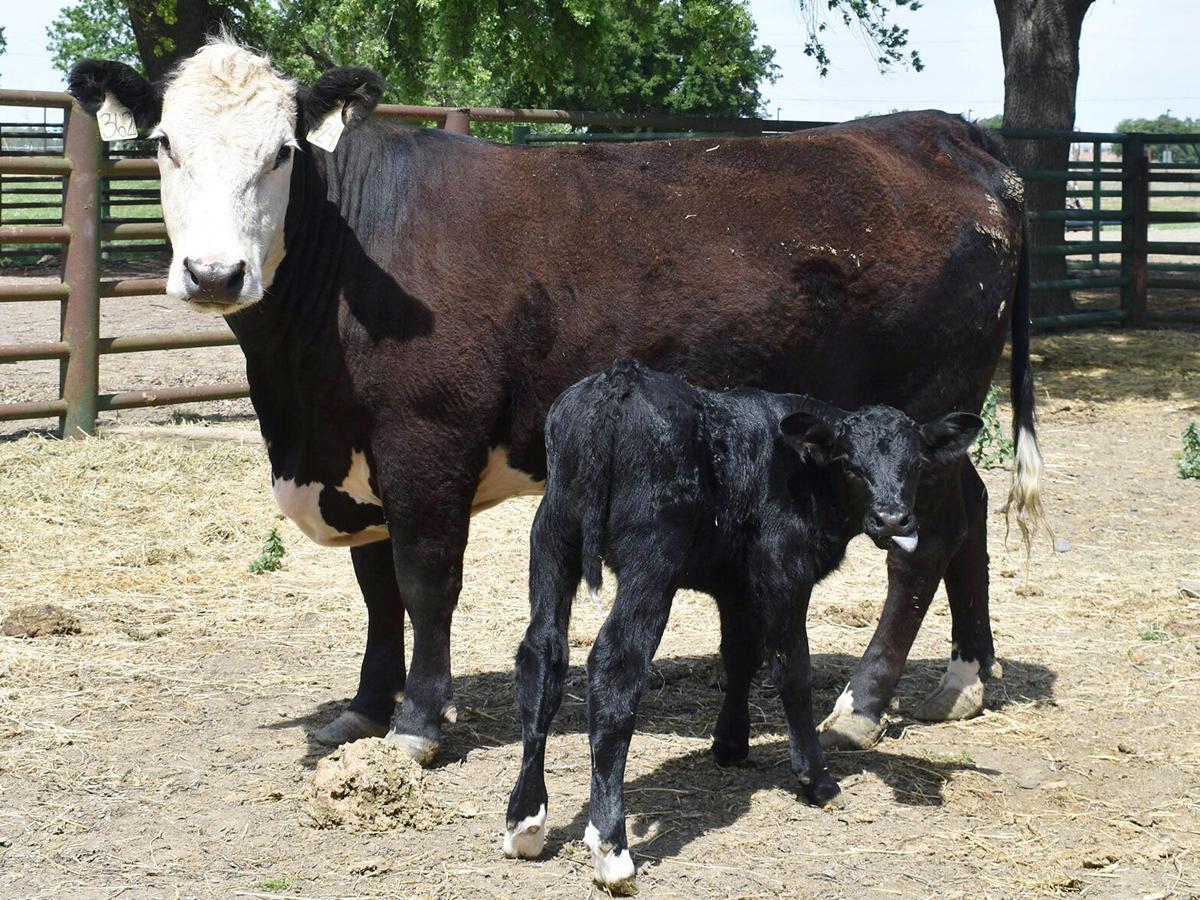 Cosmo, the genome-edited calf, with his surrogate mother, Cow 3113, or “Elle.” 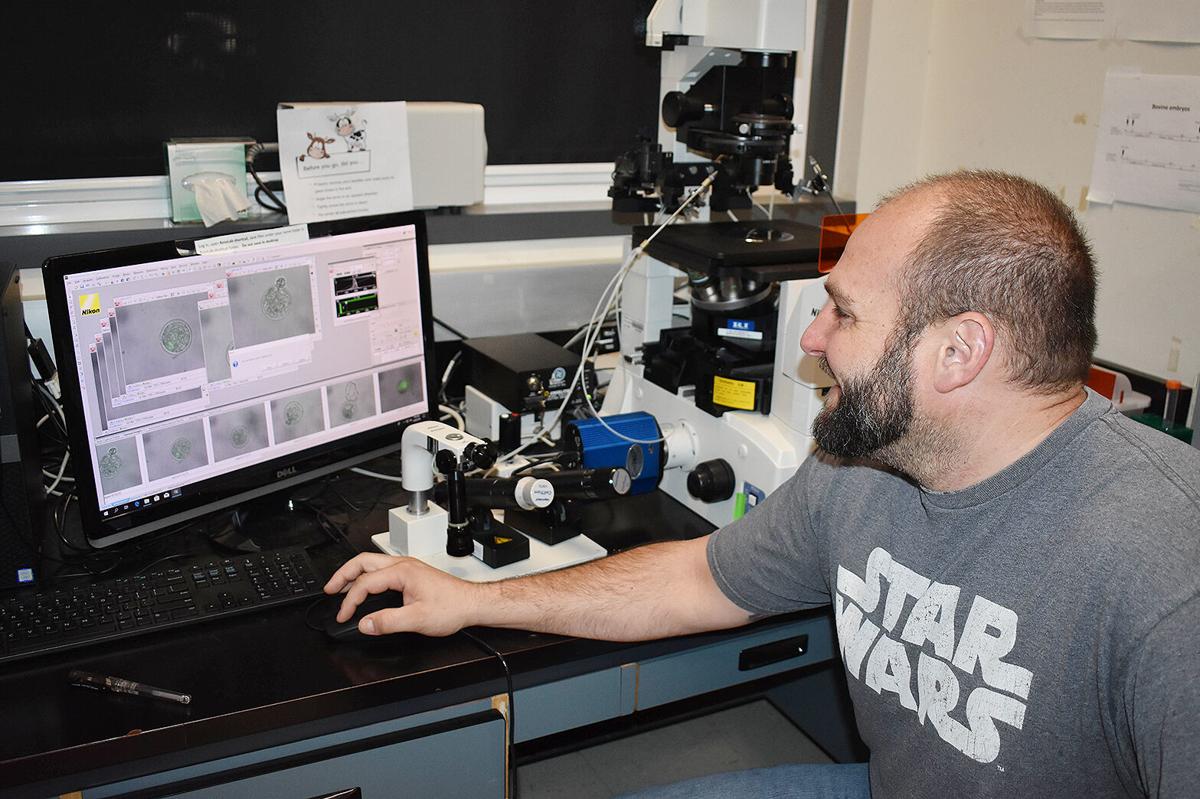 Joseph, or “Joey,” Owen, who worked with Alison Van Eenennaam on genome-editing as his Ph.D. project, looks at a computer screen with images of the final batch of embryos. 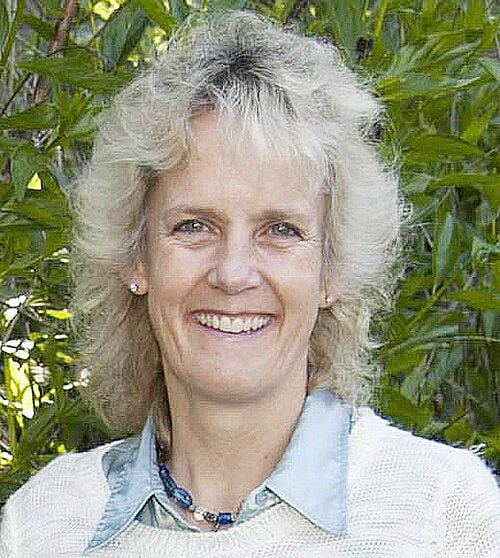 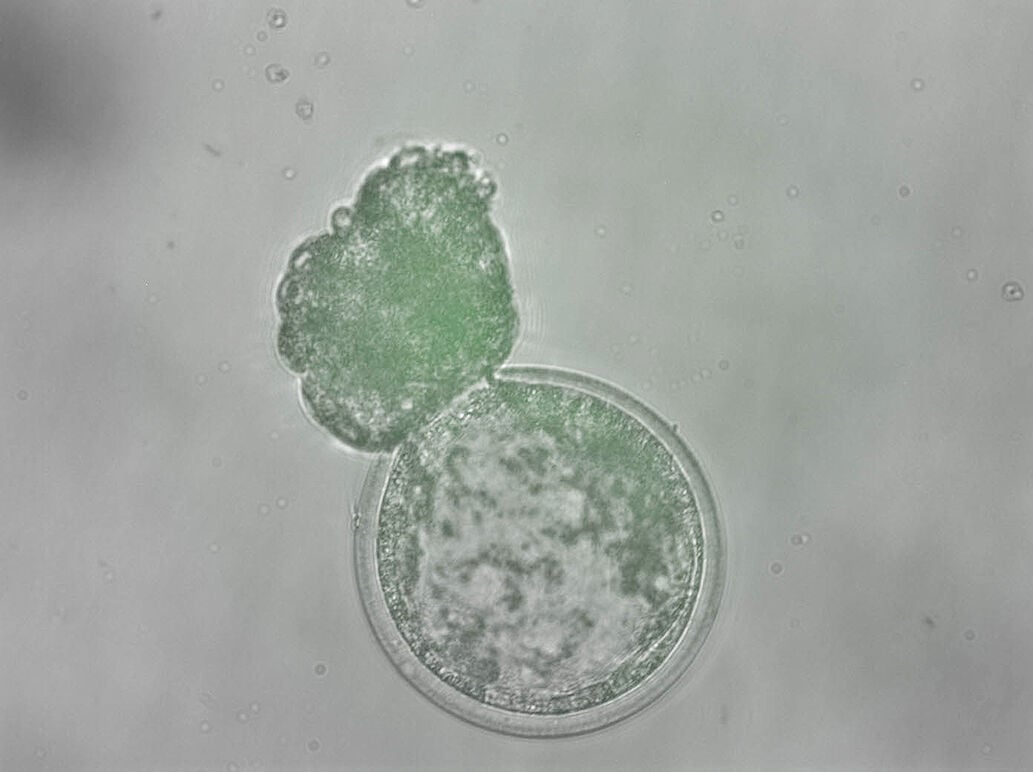 Cosmo as a “blastocyst,” a seven-day-old embryo. He is shown here glowing green because he is a genetically modified organism containing jellyfish DNA that glows green under ultraviolet light. The researchers used jellyfish DNA so that they would be able to easily see which insertions were successful and choose only the successful ones for the final batch.

Cosmo, the genome-edited calf, with his surrogate mother, Cow 3113, or “Elle.”

Joseph, or “Joey,” Owen, who worked with Alison Van Eenennaam on genome-editing as his Ph.D. project, looks at a computer screen with images of the final batch of embryos.

DAVIS, Calif. — Five years of research, half a million dollars, dozens of failed attempts — and now the calf was seven days late.

His due date, March 30, had passed. Alison Van Eenennaam, animal genomics researcher at the University of California-Davis, recalls feeling worried.

The calf's surrogate mother, Cow 3113, or "Elle," was dilated, but nothing was happening. Finally, the vets broke the water, put chains on the calf's legs and pulled him out.

"He had his tongue hanging out of his mouth, and I was so nervous. That would've been the worst of all outcomes to lose him then," said Van Eenennaam.

He lived: 110 pounds, black with a snowy spray on each back leg and soon romping.

But this was no ordinary calf.

Cosmo was the grand finale of a series of experiments to create a line of genome-edited cattle tailored for the beef industry. He was designed to produce 75% male offspring.

But genome-editing is controversial and complicated, and U.S. Food and Drug Administration regulations mean the likelihood of Cosmo-like animals entering the marketplace is slim.

Van Eenennaam recalls it all started with a conversation.

"I was speaking to a producer, and he flippantly said, 'You know, wouldn't it be cool if you could produce a bull that made all boys?' And I thought, 'Well, hmm, that might be possible.'"

To edit Cosmo, Owen and Van Eenennaam used Crispr, a genome-engineering technique. Crispr uses a specialized stretch of DNA that can act like a pair of scissors to cut DNA strands.

Van Eenennaam aimed to use SRY, a gene which instructs mammalian embryos to develop male traits. Her goal, she said, was to use Crispr to cut DNA and insert SRY onto the X chromosome of bovine embryos to increase the likelihood of producing a male herd.

For years, they avoided inserting DNA from other species, because that would make the calves "transgenic," and according to FDA, genetically modified organisms, or GMOs.

In 2017, FDA classified any edited animal DNA as though it were a new kind of drug.

"To call an animal a drug is a bit wonky," said Van Eenennaam.

The rule meant a genetically engineered calf could never enter the food supply, GMO or non-GMO. So, since it made no difference, the researchers inserted bioluminescent jellyfish DNA into the calf embryos because, if the SRY insertion worked, the embryo would glow green under ultraviolet light — making the researchers' job easier.

The scientists moved the SRY gene and jellyfish DNA to chromosome 17 of 200 embryos. Of those, 22 survived. Nine glimmered green. Only one grew to maturity.

Cosmo was named after a glowing green character from the animated Nickelodeon television series, "The Fairly OddParents." The show's title also seemed fitting: Cosmo's dad was Holstein named Swordfish and his biological mom was an ovary donor from a processing plant.

Researchers say there was a piece of genetic code that didn't belong, and Cosmo had more SRY, the gene that causes male traits, than intended.

Critics say Crispr has too many risks.

Other Crispr animals have had odd side effects: pigs with extra vertebrae, cattle that die prematurely, rabbits with huge tongues.

Lisa Moses, animal bioethicist at Harvard Medical School, told the Wall Street Journal last year, "It's really hubris of us to assume that we know what we're doing and that we can predict what kinds of bad things can happen."

Van Eenennaam said because of public sentiment, Crispr challenges and FDA rules, there likely won't be a U.S. market soon, if ever.

"If you'd told me 30 years ago this still wouldn't be allowed by U.S. regulators, I wouldn't have believed you — and I would've for sure pursued a different career," she said.

"Genetically modified corn, tomatoes and other vegetables are accepted by a large portion of society," he said. "So why should an animal be any different?"

Cosmo won't become steak, but the little calf has work to do: get weaned, grow up, and breed to see if his offspring really are 75% male.

Debate heats up over bill to bar business tax changes