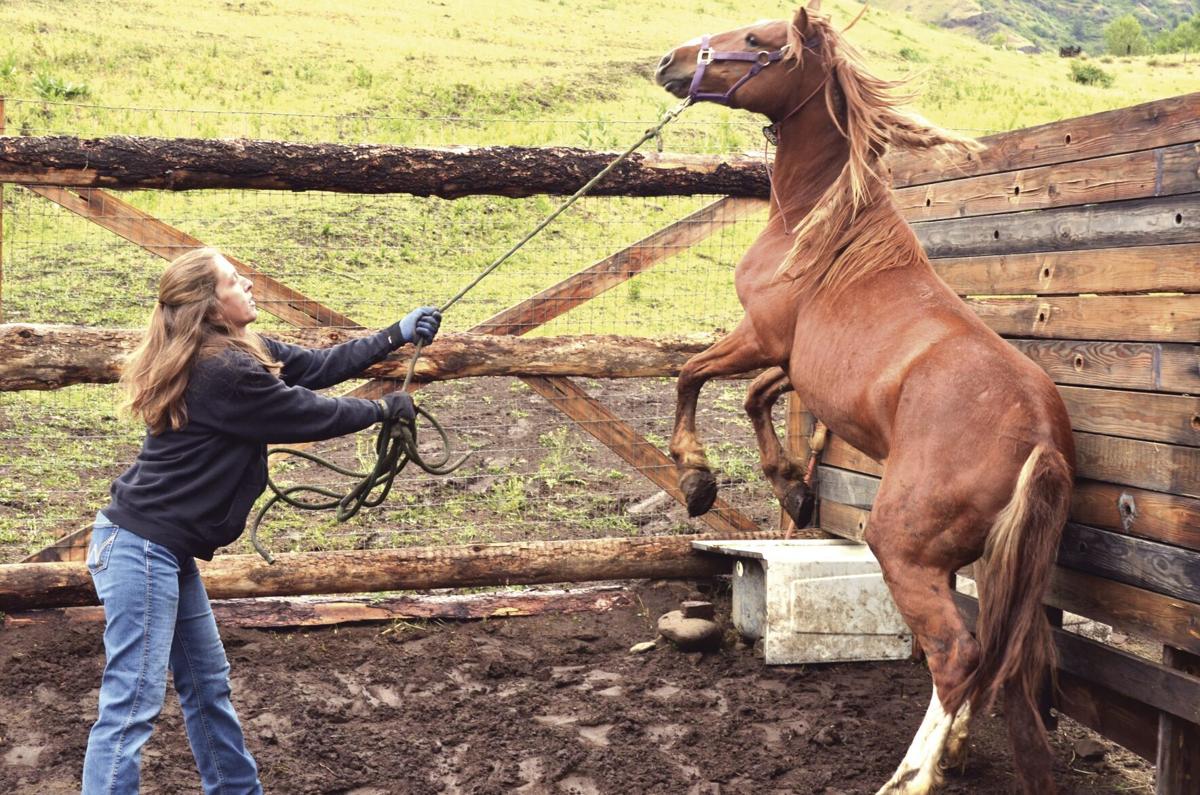 Dawn Medley reins in Girlfriend, Medley’s wildest mare at Medley’s Mustangs, the ranch she runs in the Imnaha Canyon with her husband, Eddy, on Thursday, June 10, 2021. Girlfriend was only a couple of weeks out of the wild. The Medleys train wild horses and adopt them out to new owners. 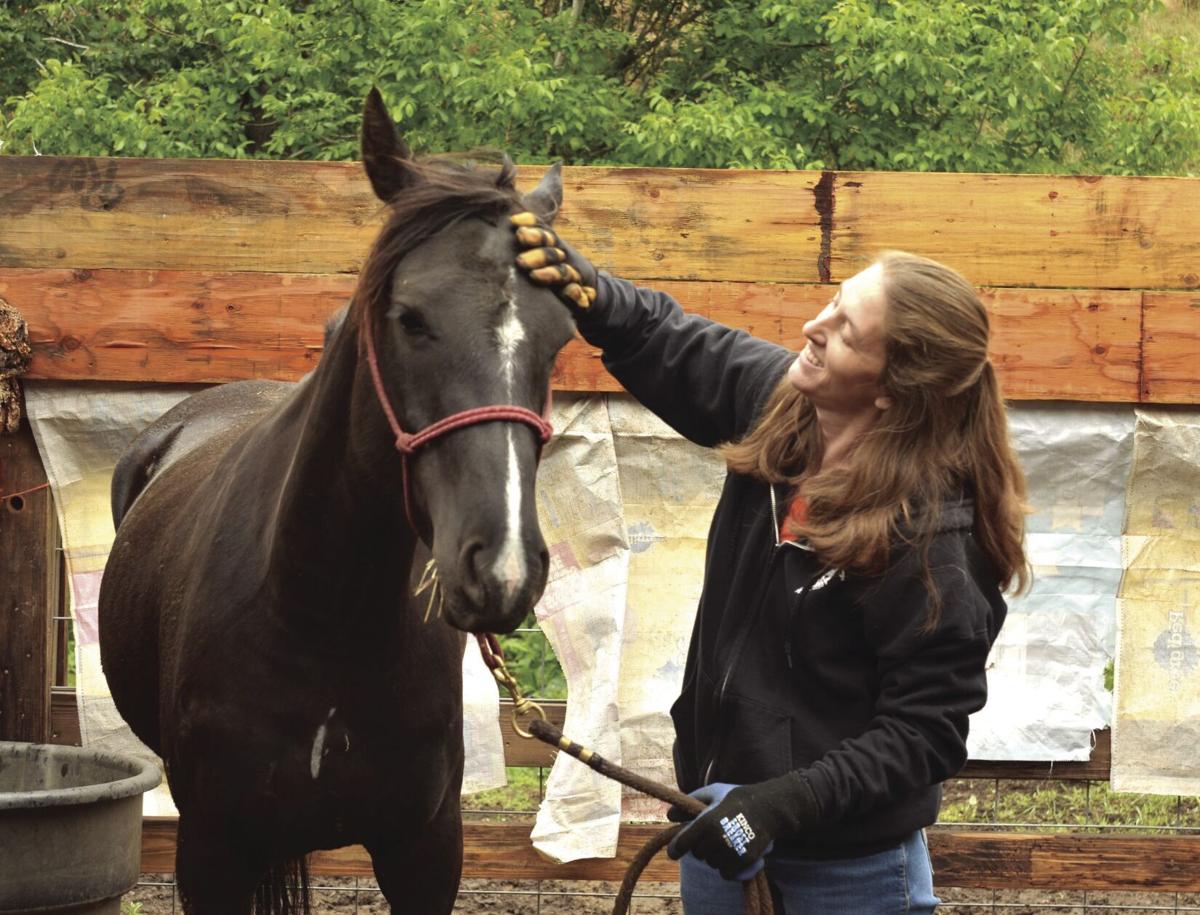 By nature skittish animals, horses often are uncomfortable having their heads and faces touched. Dawn Medley demonstrates how 4-year-old CoCo has been gentled to the point she can pet her Thursday, June 10, 2021, at Medley’s Mustangs ranch, which she operates with husband, Eddy Medley, in the Imnaha Canyon. 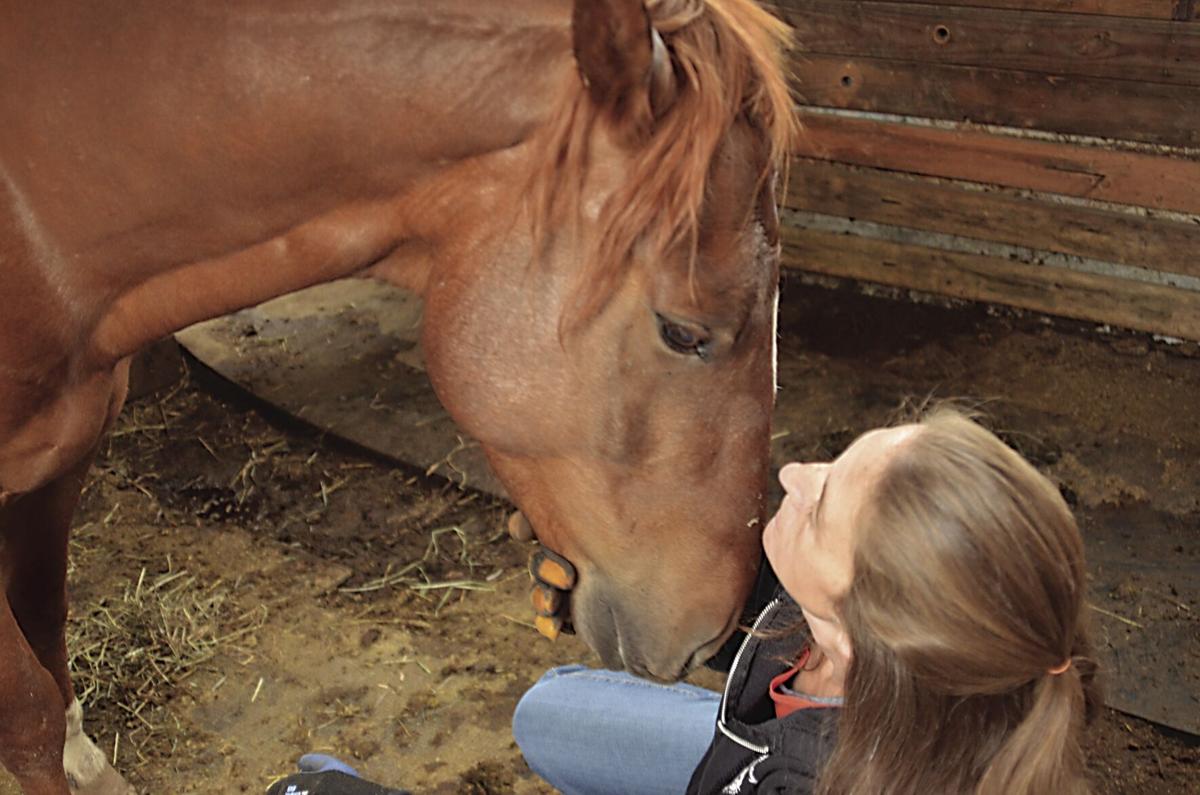 Dawn Medley snuggles Lincoln, showing how tame he has gotten in the time she’s been working with him. 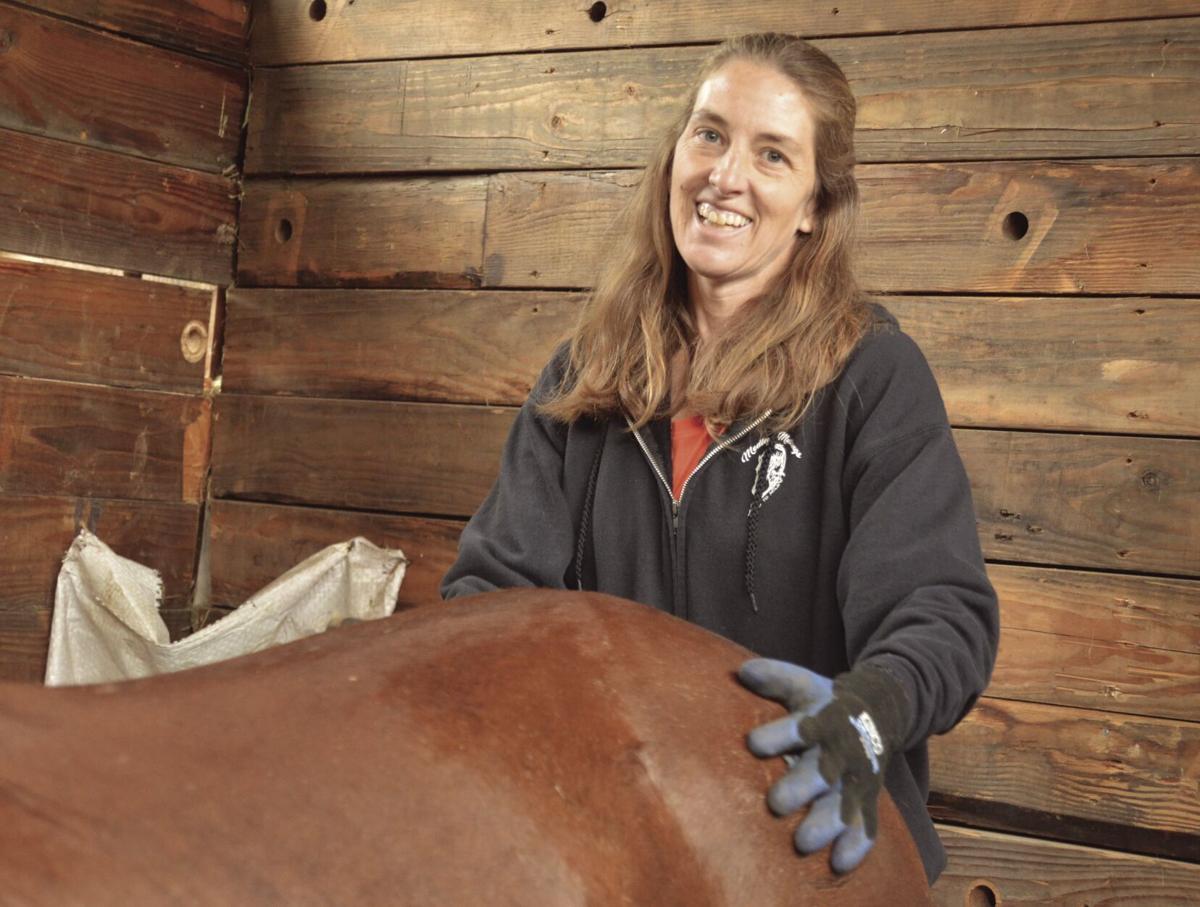 Dawn Medley, of Medley’s Mustangs in the Imnaha Canyon, demonstrates how tame one of her mustangs, Lincoln, has become by standing behind it. 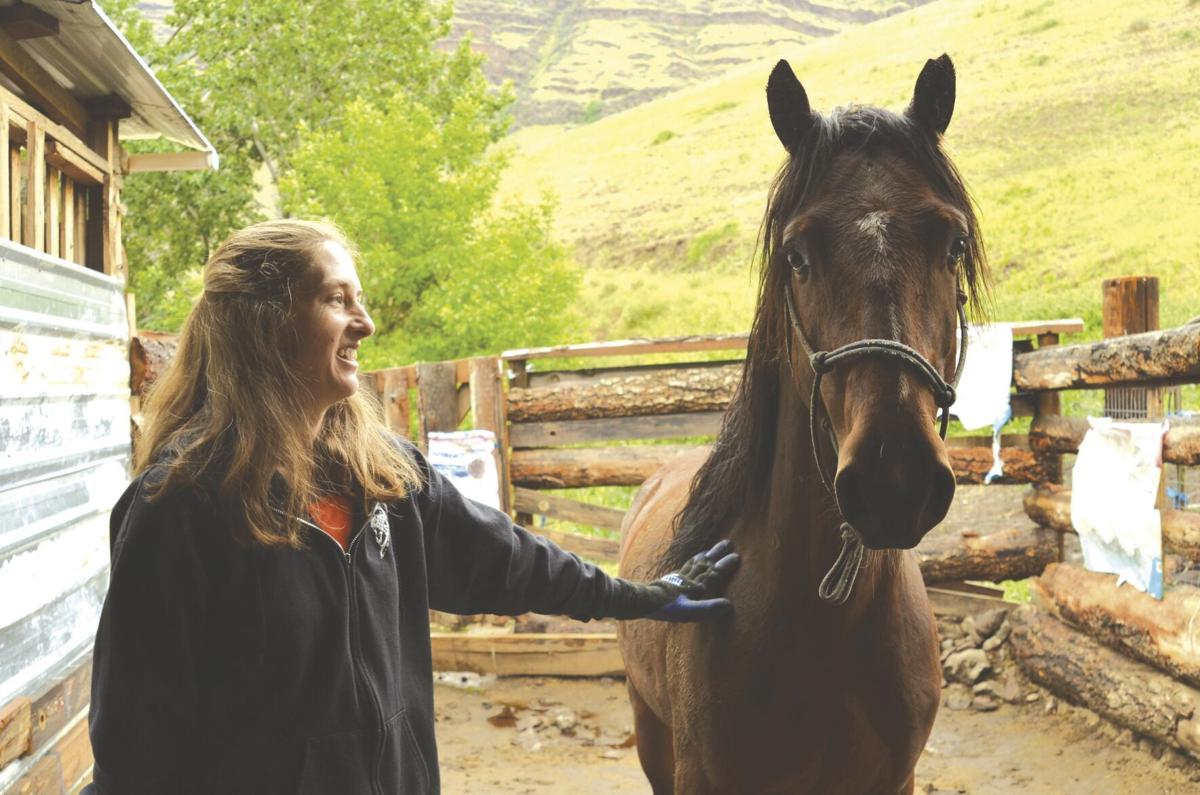 Dawn Medley stands with 5-year-old Mouse, one of her tamer gelding mustangs. 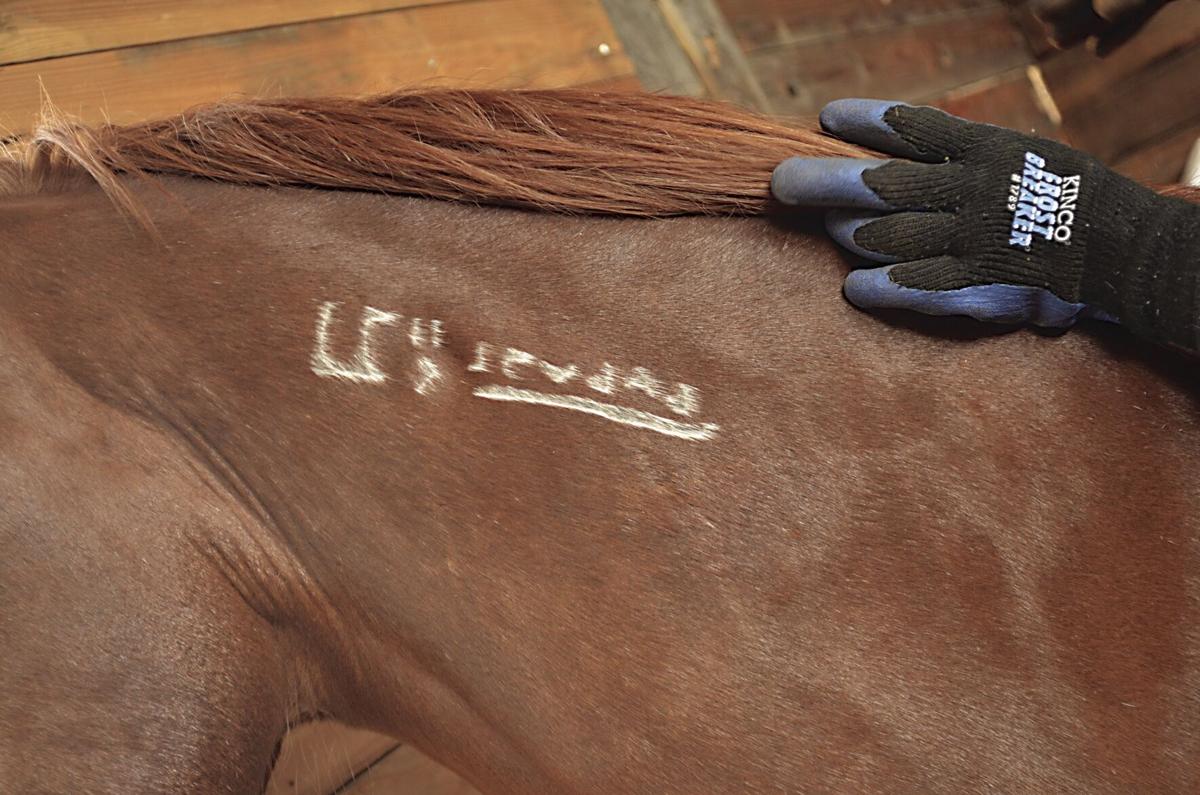 Dawn Medley reins in Girlfriend, Medley’s wildest mare at Medley’s Mustangs, the ranch she runs in the Imnaha Canyon with her husband, Eddy, on Thursday, June 10, 2021. Girlfriend was only a couple of weeks out of the wild. The Medleys train wild horses and adopt them out to new owners.

By nature skittish animals, horses often are uncomfortable having their heads and faces touched. Dawn Medley demonstrates how 4-year-old CoCo has been gentled to the point she can pet her Thursday, June 10, 2021, at Medley’s Mustangs ranch, which she operates with husband, Eddy Medley, in the Imnaha Canyon.

Dawn Medley snuggles Lincoln, showing how tame he has gotten in the time she’s been working with him.

Dawn Medley, of Medley’s Mustangs in the Imnaha Canyon, demonstrates how tame one of her mustangs, Lincoln, has become by standing behind it.

Dawn Medley stands with 5-year-old Mouse, one of her tamer gelding mustangs.

IMNAHA CANYON, Ore. — It’s not the average horse that you’ll find at Dawn and Eddy Medley’s ranch in the Imnaha Canyon. In fact, it wasn’t so long ago many of the horses were running wild as mustangs throughout the West.

“I love doing this because they (the mustangs) have no choice,” says Dawn Medley, co-owner of Medley’s Mustangs. “They lost their families, and that’s what these horses are all about — family. I want to be able to connect them to a ‘family’ and to love them for as long as they live.”

Medley’s Mustangs is an operation just downriver from Imnaha that helps train and adopt out mustangs gathered from the overpopulated herds descended from horses brought to the New World by the Spanish. They’ve since become feral animals — and their numbers are growing like crazy.

“The herds can double in four to five years if not managed properly,” Dawn says. “You could have 1,000-1,200 horses where they say you could only manage 150-250 horses. Horses eat (available forage) straight down to the ground, unlike cows, where they’ll leave some of the grass. (Horses) are pretty hard on the ground.”

Roaming largely on land managed by the federal Bureau of Land Management, regular attempts are made to cull the herds and find owners and trainers to take them under the BLM’s Wild Horse and Burro Program. The Medleys’ nearly 18-acre operation is one of those where they currently have a half-dozen or so horses.

“We originally started in September of 2018,” Dawn says. “I became a TIP (Trainer Incentive Program) trainer and we got our first (mustang) in October, so through the Bureau of Land Management, I’m basically a self-contractor. The BLM partners up with the Mustang Heritage Foundation and they help fund the program throughout the United States.”

It’s the rapid growth of the herds that makes for an issue involving both the government and horse lovers.

“They can double in four to five years,” Dawn says.

For example, she says, at the Beatys Butte Herd Management Area near Lakeview the last gather was in 2015. The BLM gathered 100 horses, removed 50 and returned 25 mares using fertility control. She adopted one in 2015.

“There are a lot of horse advocates out there for the wild mustangs, too, who say, ‘Hey, this is an American heritage, a living symbol of the historic and pioneer spirit of the West.’ But you really have to look at it as overpopulation,” she says. “It’s just like with people. You have to manage it somehow or it’s just going to get out of control. I don’t want to say I believe in slaughter, but ….”

Dawn said she’s aware of three horse slaughterhouses in Canada and five in Mexico. The last three in the U.S. closed in 2007 under pressure from animal-rights groups. But was that the best solution?

“Even the loving horses that you’ve raised from birth, people will take quarter horses … and unfortunately, there’s a bad rap going on for the (BLM’s Adoption Incentive Program) right now,” Dawn says.

She finds herself divided on the issue of slaughterhouses.

“I can’t say ‘yea’ and I can’t say ‘nay’ because of where my heartstrings are. (For example) I have my Palomino here. He’s 20. What if he goes lame and gets hurt? Do I want to send him out to pasture? Can I keep him financially?” she says. “I mean, seriously, I’ve got another guy out here I took from the county, in Joseph, he’s a pasture pet. He came to me crippled after I did my evaluation and he’s a domestic-born Paint and unfortunately, the person before me messed him up. I can’t do anything with him so he just eats my pasture and just looks pretty. Do I have money and time for that? No. But am I going to send him to an auction house? No, I can’t. That would probably, most likely for him, mean slaughter, and it’s not fair to him, so my heartstrings say, no. Now, what other people do in their own time, that is not my concern. Everybody has a choice and if they choose to do that, then it’s their choice.”

Dawn spends hours each day working with her mustangs learning the idiosyncrasies of each.

“I troubleshoot what each horse will let you do,” she says.

The first difficult chore, once a mustang has been brought to where it will be trained, is to get a halter on it. Keeping the bridle on can be a chore, too. One mare, CoCo, was an example.

“She’s still learning that touches aren’t going to hurt her and what is OK and what isn’t OK,” Dawn says. “She lost her halter the other day and it took my husband about 10 minutes to get it back on.”

She has to find ways to gradually get horses used to being touched.

“When people try to put a bridle on a horse, the horse is like, ‘Don’t touch me.’ They’re very sensitive up here,” she says, touching CoCo’s head.

Dawn is still trying to get her wildest mustang to relax around her. Girlfriend was only two weeks out of the wild.

“It took me about a week to be able to touch her,” Dawn says.

She often uses a long stick with a string on it much like is used to direct show hogs. It gets the mustang used to being touched.

“She’s the wildest,” Dawn says. “She’s the most apprehensive about being touched.”

She coos and talks to to Girlfriend, allows Girlfriend to get used to Dawn’s smell to get Girlfriend used to her and calm down.

Under the BLM’s Adoption Incentive Program, the horses remain government property and an adopter signs a one-year contract to ensure they properly care for the horse. Adopters must show they have sufficient feed, water, pasture, a trailer and can pay veterinarian expenses.

“It’s an incentive to get more people to adopt more mustangs that are completely wild,” she says. “The government would really like you to take that $500 and send that horse to a trainer rather than just spend it — put it toward the animal instead of toward your personal gain.”

She charges $125 for a horse that goes to an adopter.

“It may be the most-expensive $125 you spend, but I’ve got three and I will never go back to domestic,” she says.

The Medleys stick with horses, they said, since true to their reputation, burros can be stubborn.

Their lone experience with a burro did have some positive effects.

“Our 6-year-old did really good with the burro,” Eddy says.

Home on the range

The Medleys love what they do and where they do it. Their ranch is about 5 miles downriver from Imnaha and the 18 acres have hardly a flat spot among them.

He’s the one who did the lion’s share of building the ranch before he came down with a disability.

They have a garden and a wide variety of fruit trees. They also have a boar, a sow and a litter of piglets, along with chickens and dogs.

Dawn’s two older kids from her first marriage are grown and gone, but her daughter recently made Dawn a grandmother. The two younger kids, ages 6 and 9, help on the ranch and attend school in Imnaha.

But in the three years they’ve been training and taming mustangs, the Medleys seem to have found their calling.

“We have a motto: To get as many wild-to-mild mustangs out of the corrals and find the loving adoptable homes,” Dawn says. “Also, to watch something so majestic and ‘wild’ become your partner and become one with them” she finds fulfilling.