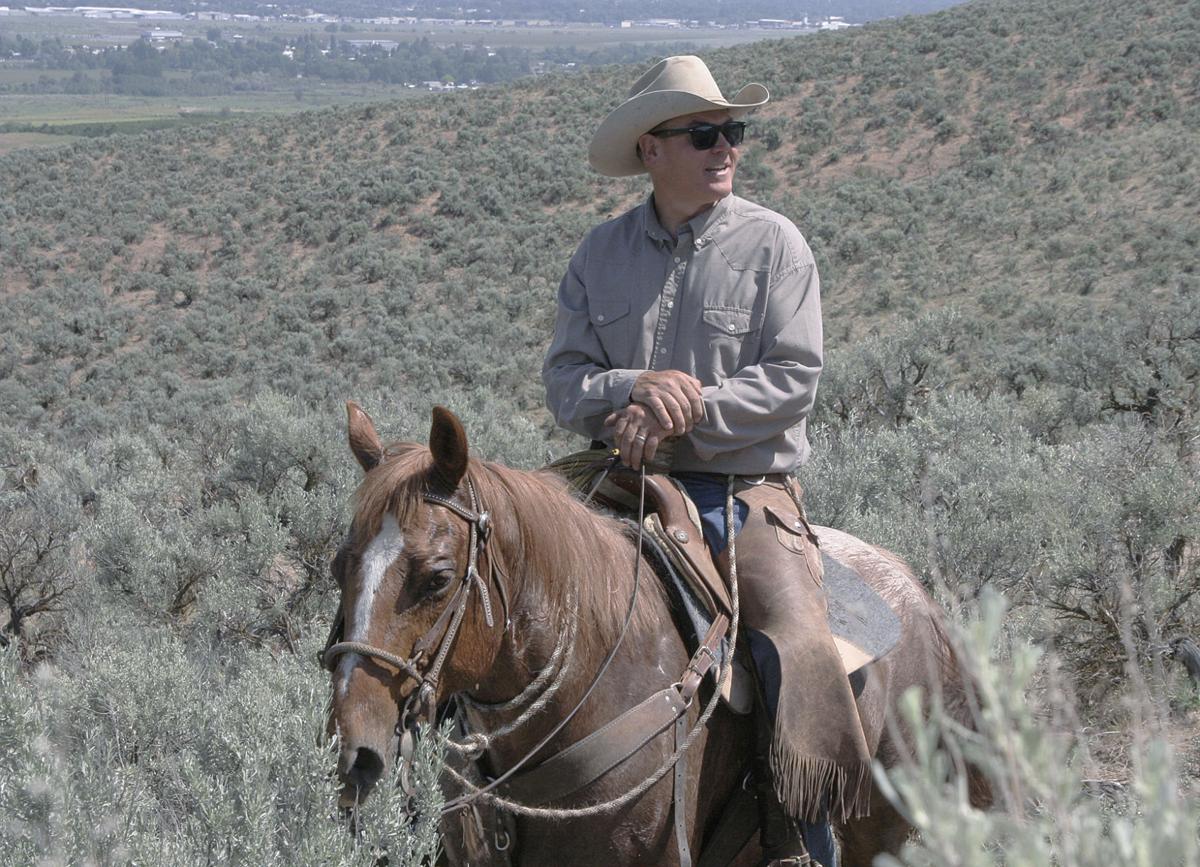 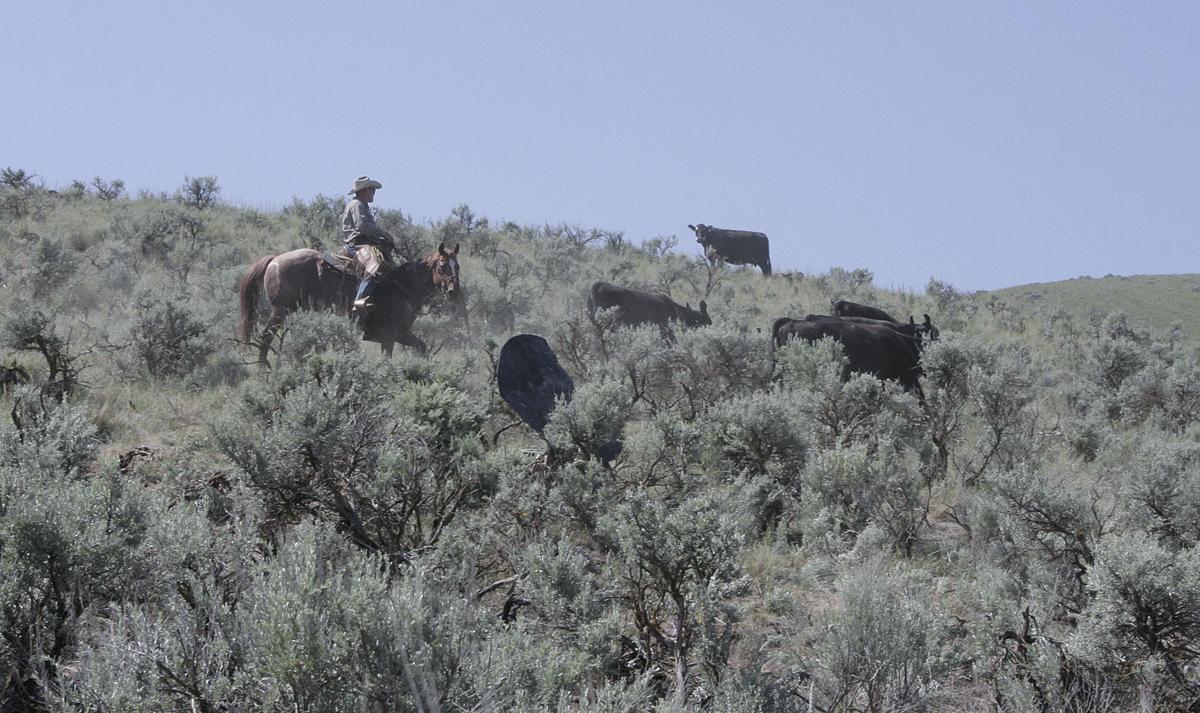 Jack Field, executive director of the Washington Cattle Feeders Association, moves cattle on a hill near Yakima, Wash., the morning of May 29. 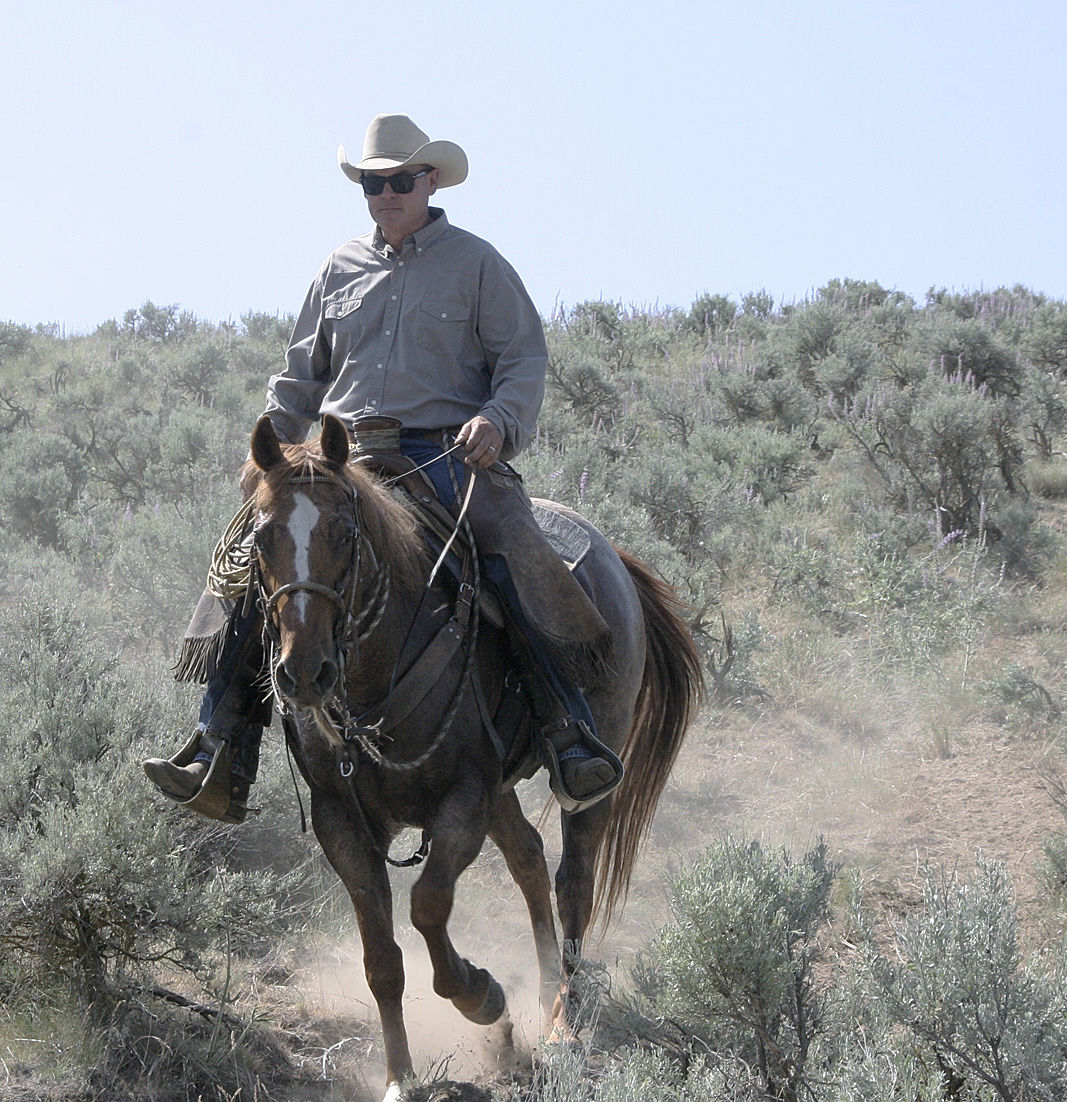 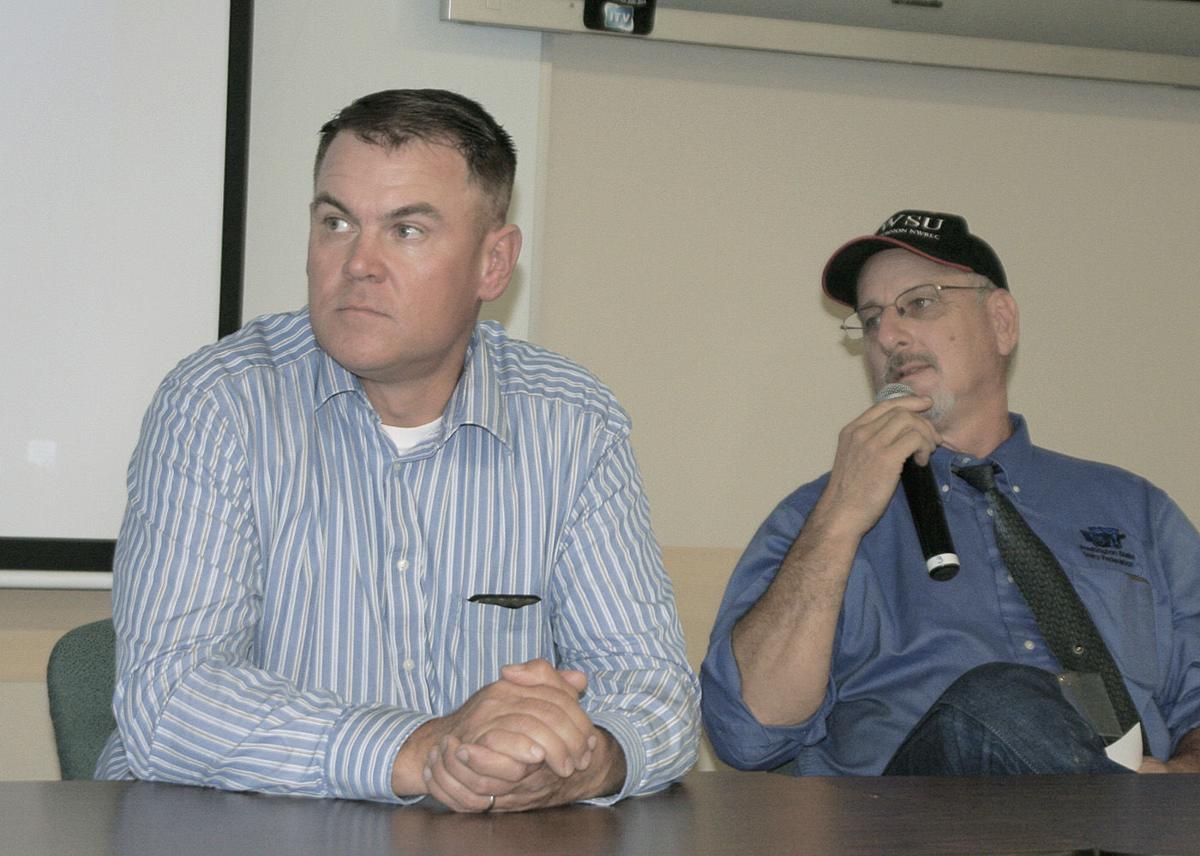 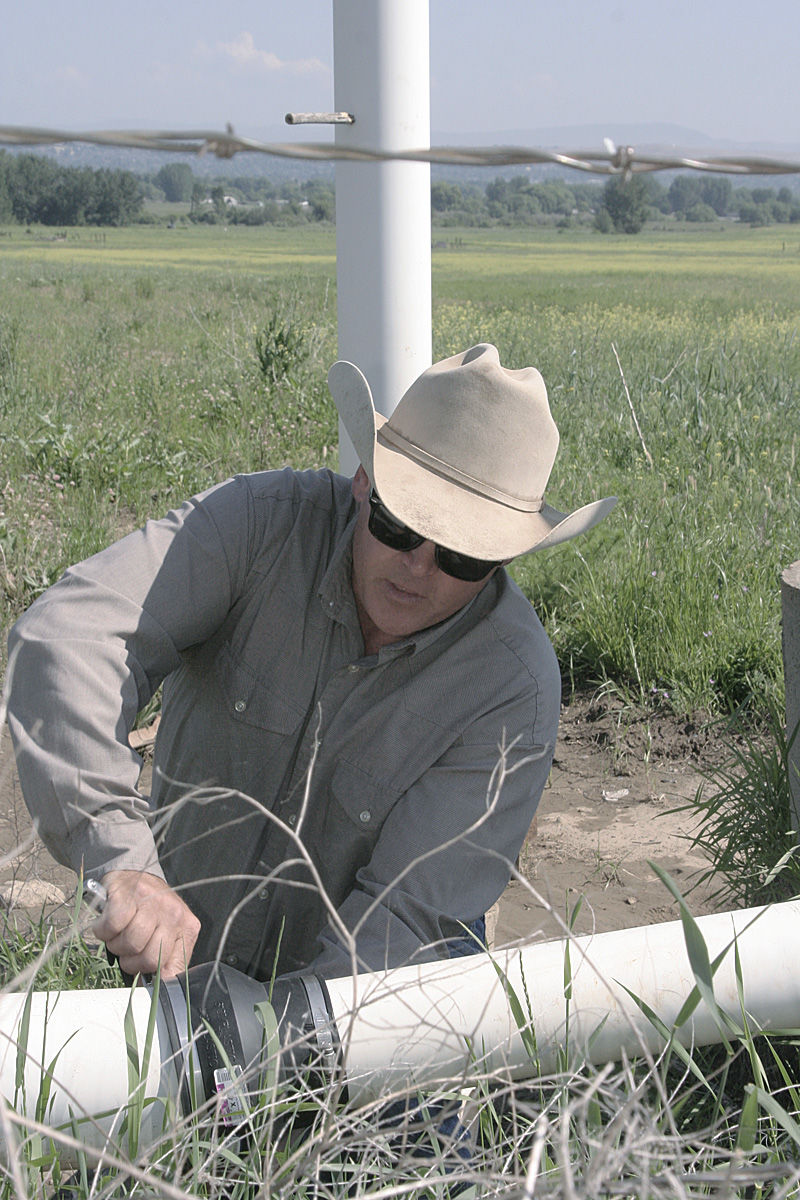 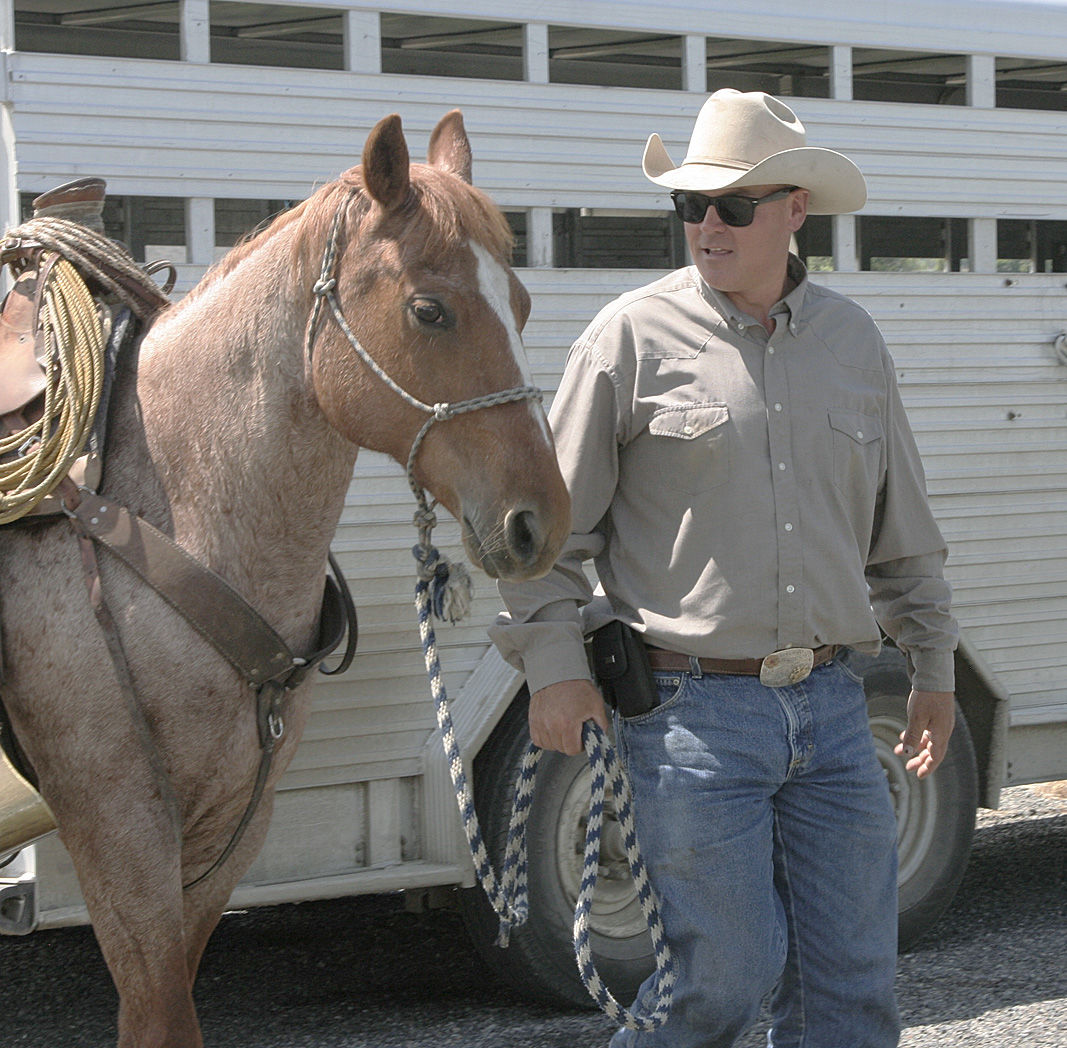 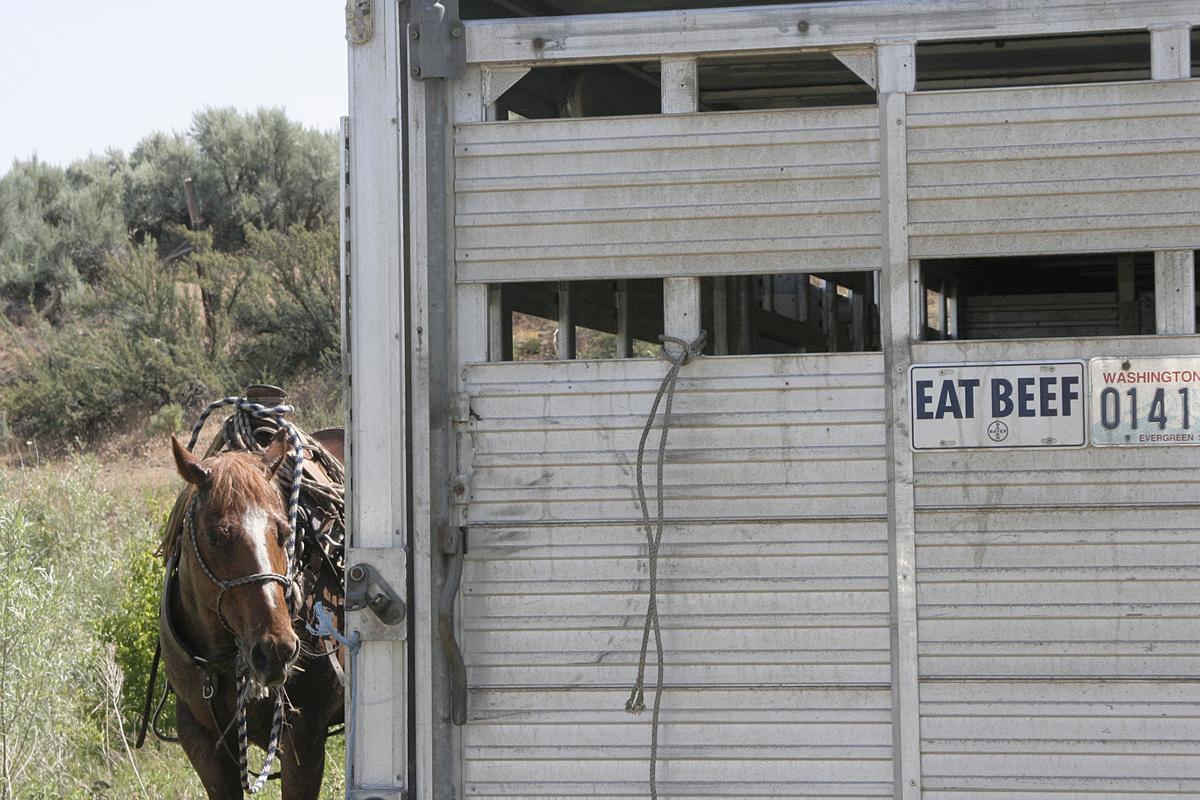 A sign on Jack Field’s trailer promotes beef as his horse, Rascal, rests after moving cattle up a hill. 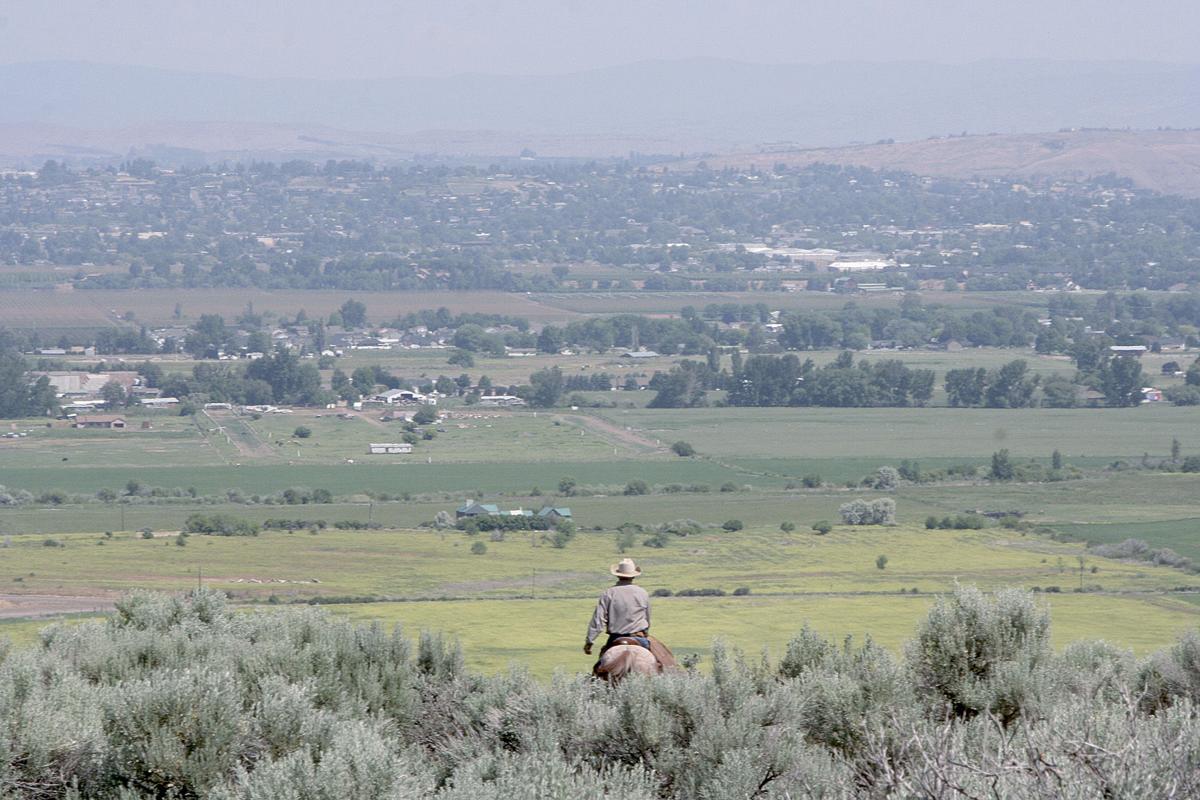 Jack Field and his horse, Rascal, head back toward Yakima, Wash., after moving cattle.

Jack Field, executive director of the Washington Cattle Feeders Association, moves cattle on a hill near Yakima, Wash., the morning of May 29.

A sign on Jack Field’s trailer promotes beef as his horse, Rascal, rests after moving cattle up a hill.

Jack Field and his horse, Rascal, head back toward Yakima, Wash., after moving cattle.

YAKIMA, Wash. — On a recent May morning, Jack Field repaired an irrigation pipe on his ranch.

He then saddled up his 14-year-old gelding, Rascal – “kind of my right hand” – and moved some of his 70 cattle up a hillside to the back end of the pasture.

He checked the stock water wells.

He visited with a neighbor.

He cut hay that he planned to bale later.

He did a little computer work for his side job selling pasture, range and forage crop insurance.

In between all these, he put on his “official” hat as executive director of the Washington Cattle Feeders Association and took to the phone, scheduling meetings for a board member in Washington, D.C., coordinating upcoming events at a processing plant and arranging lunch for legislator tours.

For Field, this was a “pretty quiet” day, he said.

In those positions he has represented ranchers and others in the industry on some of the most important topics impacting beef production — water and air quality, wolf management, property rights, environmental issues, livestock identification and animal welfare.

Field has always been around cattle. He grew up on a small cow-calf operation in Tumalo, Ore.

His father, John, was active in the Deschutes County Cattlemen’s Association. Field remembers his father talking about water quality and various important court cases in the early 1990s. The same issues were around years later when Field joined the industry, he said.

Field’s parents moved to Weiser, Idaho, and ran a ranch for 17 years, retiring in 2017. His father passed away several weeks ago. His mother, Denny, occasionally helps Field with branding. He has an older sister who lives in La Grande, Ore.

Field received his degree in agricultural science and technology from the University of Idaho, with a minor in ag systems management.

He has been married to his wife, Skye, for 20 years. She works at Yakima Valley College.

Field was working as assistant farm manager on a 2,200-acre row-crop farm when he saw an advertisement for the cattlemen’s association position.

He had no clue what an executive vice president did.

“I thought ‘Well, heck, maybe I’ll apply. This must be less hours than farming,’” Field said.

He wore out five cars in 12 years traveling for the job, criss-crossing the state to meetings with ranchers, legislators and others.

It also allows him to work from home.

The association has made huge steps forward on air quality, and members are working closely with the state to update dust plans, he said.

“It makes you very proud to see the level of commitment and how seriously cattle feeders are taking the job of being a good steward and neighbor to heart,” Field said.

“Jack puts beef producers first — whether it’s a packer, feeder or rancher, he will always stand up and pursue items for the better of the industry,” said Jared Easterday, president of the cattle feeders association.

Field worked with the state Department of Ecology on legislation on fugitive dust plans for cattle feeders in Washington.

“This work gave feeders and regulators a playbook that both sides could build on and has built a foundation which will continue on,” Easterday said.

Field’s work on the latest brand bill opened up electronic identification and kept fees in check while promoting a streamlining of brand inspections, Easterday said.

“He has a special knack for getting us government folks to see things from his perspective,” Ecology Director Maia Bellon said. “Because of his willingness to be open and frank, but always respectful, we’ve built a relationship of mutual trust. Jack’s approach has forged many practical solutions that support agricultural interests while meeting environmental standards.”

“He may not know it, but his work has benefited every member of the beef community in our state,” Easterday said.

But his focus was less on halter-breaking cattle and more on “rodeo, rodeo, rodeo,” he said. He rode saddle bronc and roped calves for 17 years.

“If there was a little rodeo or jackpot within an eight-hour drive, I was going to be there,” he said.

He stopped riding about five or six years ago due to injuries. He moved on to roping calves, but now the needs of his ranch come first.

Field leases about 1,100 acres and hopes to grow it to 100 to 150 cows. Particularly when he was working for the cattlemen, Field would feed his cows at 2 or 3 a.m. so he could attend an 8 a.m. meeting in Olympia, then get home at midnight and do it over again.

It helped him better understand how the issues he worked on each day affected ranchers of all sizes.

“I definitely was personally invested into things, hopefully as much as the people I was working for,” he said.

“Jack’s the kind of guy that never stops looking for ways to better the industry,” said Patti Brumbach, executive director of the Washington Beef Commission. She has worked with him on numerous industry-related issues. “He cares a lot about the future of the beef community.”

“He’s a ball of energy,” Stokes said. “He’s one of those people who could hear something once and start formulating a solution for it.”

Some people call him “the Energizer Bunny,” but Benge, Wash., rancher Dick Coon says that doesn’t do justice to Field’s vitality.

“I can always smile and feel somewhat smug because we have two of the best in the country here in Washington,” he said, pointing to Brumbach and Field. “For a state that ranks 22nd or 24th as far as number of cattle in the country, we have way more horsepower at the top than what you would expect.”

While traveling, Coon and Field might discuss an issue, and in the next moment, Field would hand Coon a phone, with a senator or agency official on the other end to talk about it.

“He would have to remind us on the executive committee that he worked for us,” Coon said. “He was so good that we tended to sit back and were willing to let him make decisions. He always clearly understood that role: ‘I’m here to advise you but you guys are the ones who have to make the decision.’”

Field is no longer a member of the state’s Wolf Advisory Group, which the state Department of Fish and Wildlife set up. It is made up of ranchers, sportsmen and environmentalists. He says it’s important for the process to allow for new people and fresh ideas.

The problems he and other members of the ag community identified in a minority report then are coming to light today, he said.

Time and funding are the two biggest concerns, Field said.

“The saturation of predators in the northeast corner of the state, it’s a burden that I don’t know how many more sticks can be laid or pieces of straw before something breaks,” Field said. “The prey base has got to be wavering. The next thing is livestock.”

The state’s wolf management plan requires 15 breeding pairs across three regions before wolves are considered recovered and taken off the list of endangered species.

Wherever wolves are, Field said, the state needs the tools, funding and personnel to ensure no significant impacts to a single stakeholder.

“No one wants them in their backyard,” he said of wolves. “But if we’re ever going to get delisted (under the Endangered Species Act), they’re going to be in somebody’s backyard.”

“Jack Field is one of the most intense and intelligent people I have ever had the pleasure of collaborating with,” said Molly Linville, a Palisades, Wash., rancher and advisory group member.

“He is also one of the most infuriating, impatient, hard-headed sons of a gun you’ll ever meet, but it’s what makes him so great at what he does,” she added.

During advisory group meetings, Field was always “acutely aware” of what was not being said, and would “unapologetically pull the pin and roll that grenade of suppressed frustrations into the middle of the room so we had no choice but to talk about it,” she said.

“It almost always caused an explosion, but it also got us right down to the heart of the matter,” Linville said.

The challenge is finding a solution that will satisfy everyone “a little bit,” Field said.

“It’s trying to find that sweet spot where everybody has to give something, as long as they’re not giving too much,” he said.

Field says it’s important for ranchers to share the day-to-day of their operations with consumers.

It’s the biggest need throughout the production chain, he says.

“The worst thing we can do is not let people know how their food is produced,” he said. “We’re doing it better, more efficiently and safer than we ever have in history.”

“I’d love just to have a few hundred cows and be able to call myself a cowboy,” he said.

Farm Bureau Entrepreneur of the Year Will Take Home $50K in Startup Funds; Apply by July 31