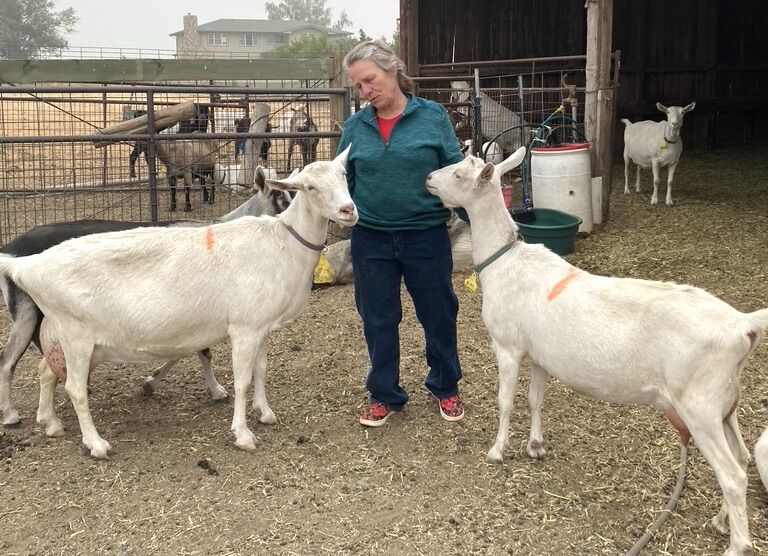 Dr. Lauren Acton with two of the goats she and John Wright moved from their farm near Molalla, Ore., to a farm 300 miles east in Union, Ore. 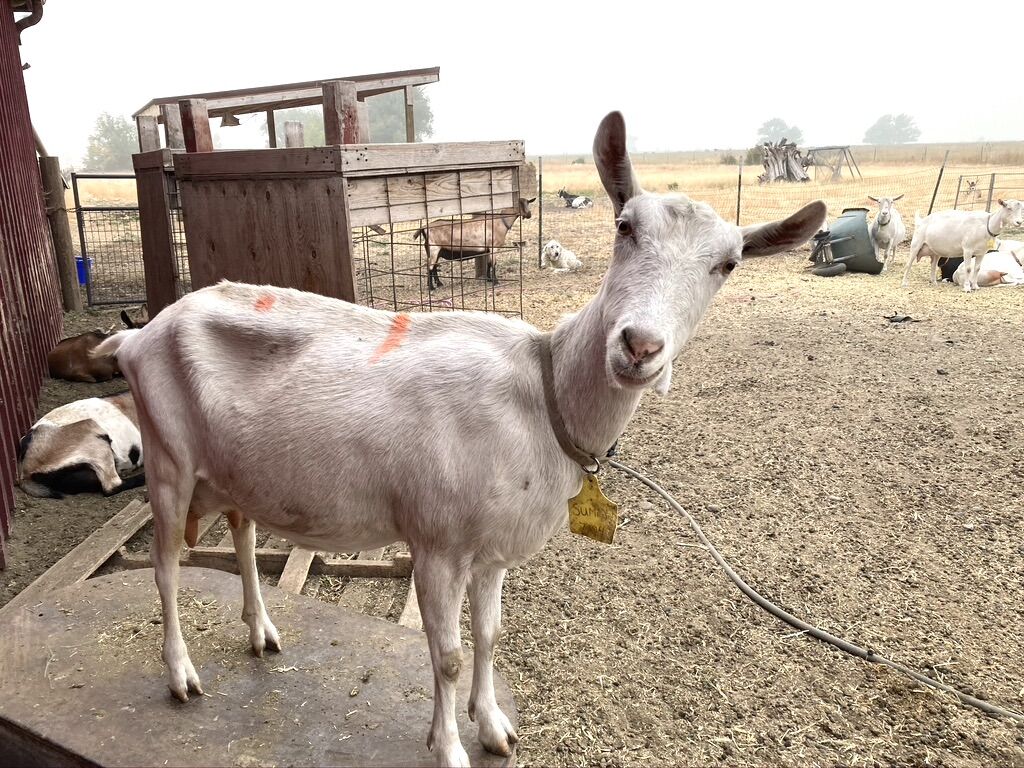 A goat from Molalla, Ore., on the state's westside adjusts to a farm 300 miles east in Union, Ore. 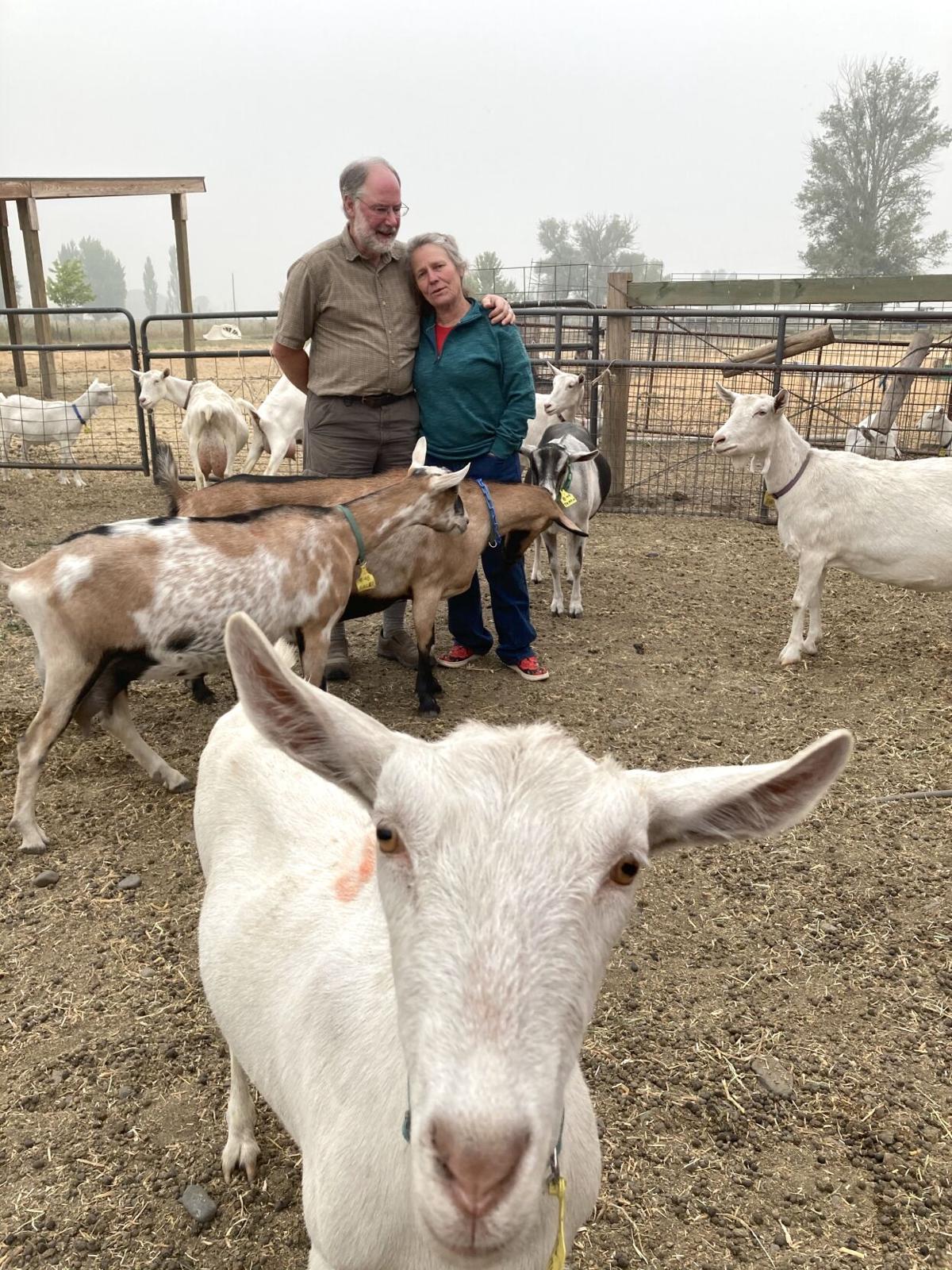 John Wright and Dr. Lauren Acton with their herd.

Dr. Lauren Acton with two of the goats she and John Wright moved from their farm near Molalla, Ore., to a farm 300 miles east in Union, Ore.

A goat from Molalla, Ore., on the state's westside adjusts to a farm 300 miles east in Union, Ore.

John Wright and Dr. Lauren Acton with their herd.

The fresh corn that Dr. Lauren Acton and John Wright planned to preserve on Labor Day is still sitting in their kitchen at their farm near Molalla, Ore. They were sitting in a couple of beat up camp chairs on Saturday 300 miles east in Union, Ore., watching their dairy goat herd adjust to its new surroundings.

Acton and Wright own Tempo Farm, a family goat farm in the Willamette Valley. As fires raged in Clackamas County, they had to move swiftly to prepare to move their 100 goats from their farm all while keeping up with the milking schedule. They prepped the farm and packed their two trailers with supplies all day Labor Day hoping for enough time to make multiple trips to evacuate all the goats. But with fires bearing down on their farm Acton made the hardest list of her life.

“I had to play God,” she said. “I had to make a list of who goes in the trailer first, second, and who doesn’t get in.”

By 10 a.m. the next day the fire was miles away, but they began to feel its heat and knew it was time to go. They had put out an early call for help, and employees, friends, and family were driving toward their farm with trailers from as far away as Washington and California.

They struggled to pack in as many goats as possible, but they prepared to leave 40 behind in an open field with water. They hoped the fire wouldn’t come and the goats could survive if it did.

As they faced this hard reality, they got a welcome call from a friend from California — he had made it to the bottom of their driveway with his trailer. With his help they were able to evacuate all the goats from the farm. Some went to California, some to a friend’s place in Moses Lake, Wash., and rest stayed with Acton and Wright at the Clackamas County Fairgrounds.

Soon, however, the fairgrounds was also under threat. They decided to move again to Grande Ronde Dairy in Eastern Oregon owned by their friends Stephanie and Byron Rovey.

The Roveys were able to offer safety, hay, pens, a secondary milking barn, and even an employee to set up their milking operation temporarily.

“Stephanie and I are colleagues,” said Acton. “But the dairy goat industry is a big family. Stephanie is incredible, and she has saved our hides more than once.”

But Acton and Wright were also very prepared for evacuation. Acton is a veterinarian and has traveled the country showing her prize breeding herd. She’s accustomed to moving animals and she has had a long career managing animal-related crises. In her free moments in the last week, she wrote up a long list of tips for evacuating on her yellow legal pad, hoping to help other people.

“First,” she said, “Do not wait for a level 3 evacuation notice. You cannot evacuate livestock in one hour. Evacuate early.”

“Second, if you have animals, you need a way to contain them safely for loading.” For horses, goats and the like, this means having enough collars and halters on hand for every animal. Cattle should be gathered and ready to load near catch pens and chutes.

Acton said the natural human fear of fire makes it harder to think. She stresses that planning and packing ahead is key. She said medication with dosage instructions, boxes of halters, and some feed should be collected so it is easy to pack and go. She also emphasizes making that “hardest list of your life” ahead of time and marking animals to stay or go clearly with paint.

She also said be prepared to keep your animals in the trailer if you break down or there isn’t room at an evacuation site. “Ventilation in your trailer is key. You also need tarps for shade and weather.”

Finally, she said, don’t forget the “human stuff” like sleeping bags, potable drinking water, a change of clothes, good shoes, medication, cell phone chargers, and most importantly, folding chairs. “Evacuation has meant a lot of waiting around,” she said.

She said she learned that feed is not as important as one may think. “Hay takes up a lot of space that could be filled with beating hearts,” she said.

“The outpouring of support has been amazing. The feed will come.” Acton said within a few hours of her arrival at the Clackamas County Fairgrounds, many pallets of hay cubes had been donated.

The volunteer groups like Real Cowboy 911 is one of the reasons feed and supplies show up. The group’s founder, Justin Jones, says they use their Facebook group and informal neighbor networks to get supplies and help to animals and people during disasters. “We have 40,000 members willing and pledged to help.”

Help during this fire season has meant coordinating both supplies and volunteers with trailers to evacuate livestock and pets of neighbors and strangers.

“This year is challenging because there are so many fires in such a short time over such a large geographic area,” said Jones. “Normally logistics aren’t so difficult because fires are in a centralized location.”

Due to the extent of the fires, Real Cowboy 911 has set up Facebook subgroup pages for states and regions where people can ask for or offer help.

Jones admits offering help is easier than asking for help for people the farming and ranching community, but that both are necessary.

“We are brought up to help our neighbors, so be vigilant about who may need help during a disaster,” he said. “Also, ask for help early and make a plan with your neighbors.”

Jones, Acton, and Wright all said preparation, early evacuation, and accepting help means the difference between life and death for livestock.

“Without the help of dozens of people, we would have been able to evacuate 40 goats, not all 100,” said Wright.

Jones’ situation is no different. “I am a horse trainer,” he said. “I have two trailers and 35 horses plus cattle. I myself would need help to evacuate.”

A week into their evacuation ordeal, Acton and Wright say they are happy to be safe in Union with the Roveys. They are grateful for the neighbors in Molalla who were able to clear out their freezers when the power went out and who give them daily updates that their house is still standing.

But Wright said it is strange to think about home. “For the first time in 25 years there are no domesticated heart beats at our place.”

More tips on preparing livestock for evacuation and disasters are available at the Oregon Horse Council and American Veterinary Medical Association websites.