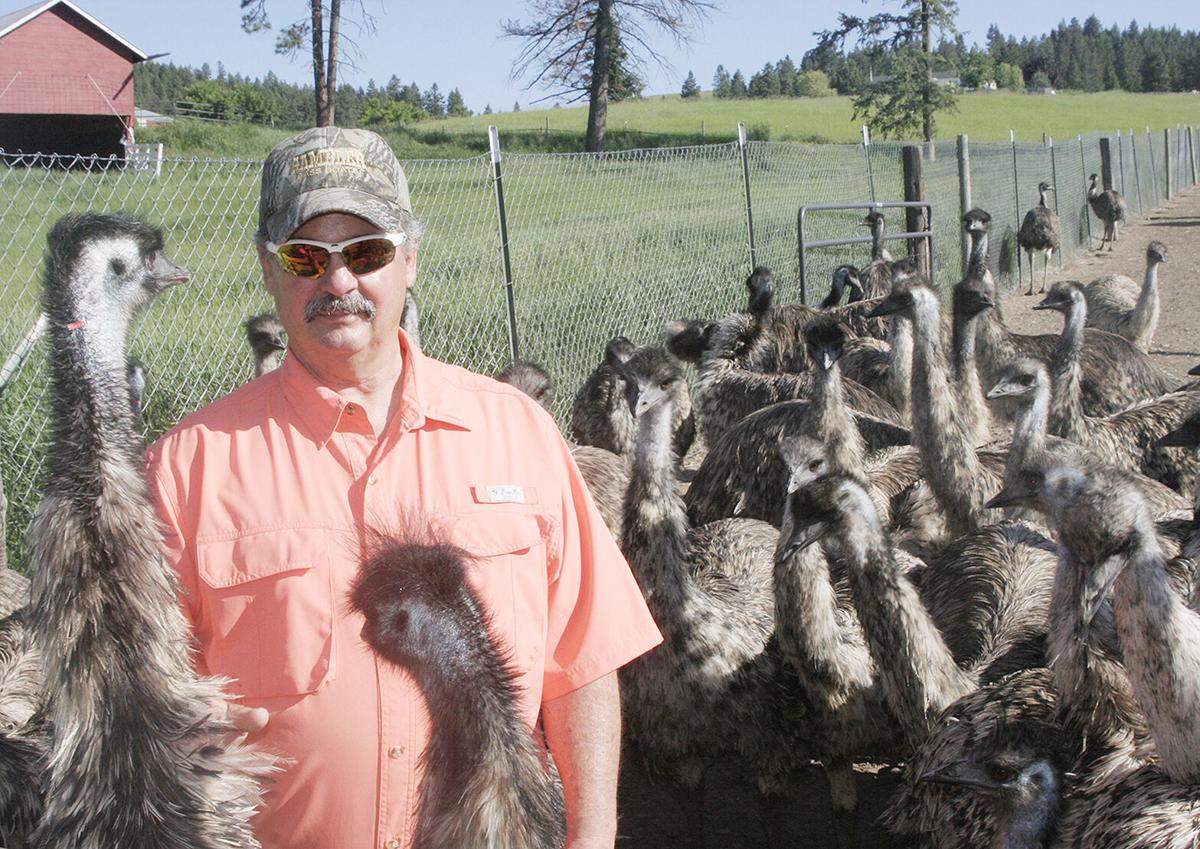 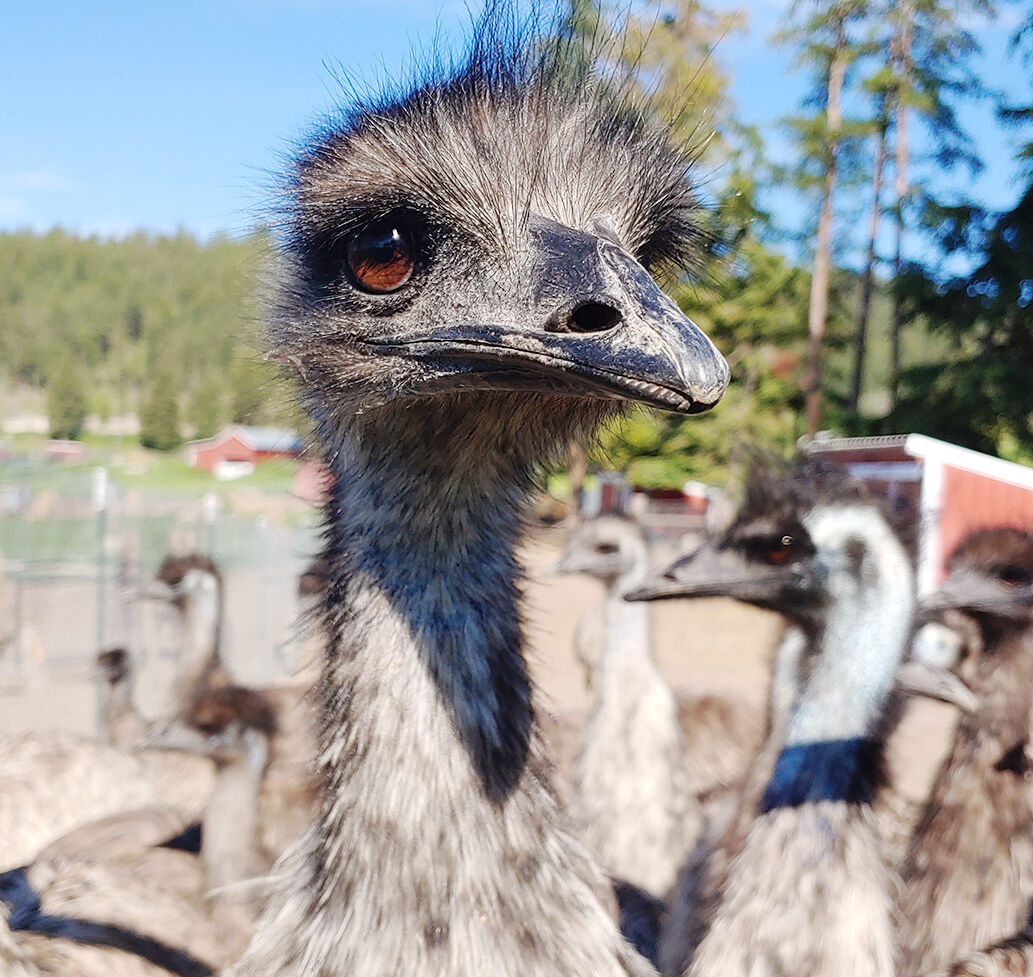 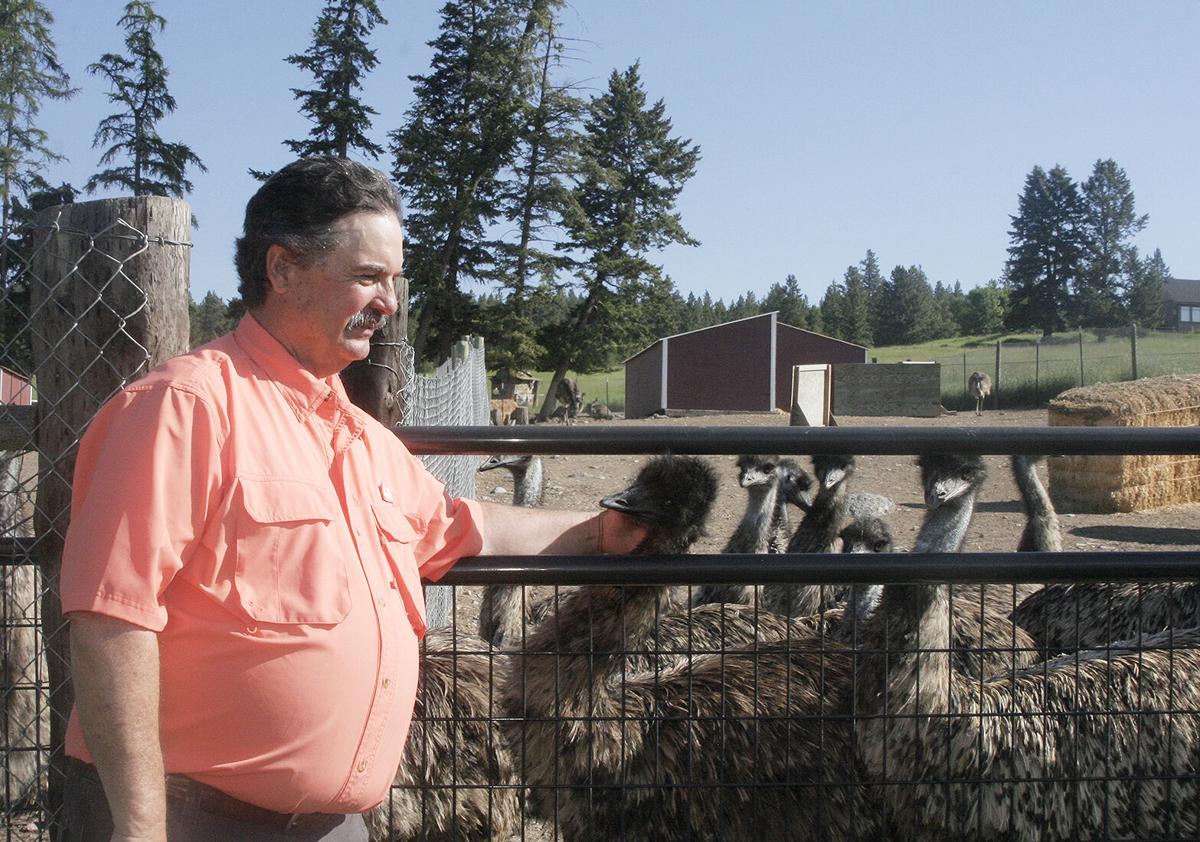 Rancher Don Collins with some of his emus. 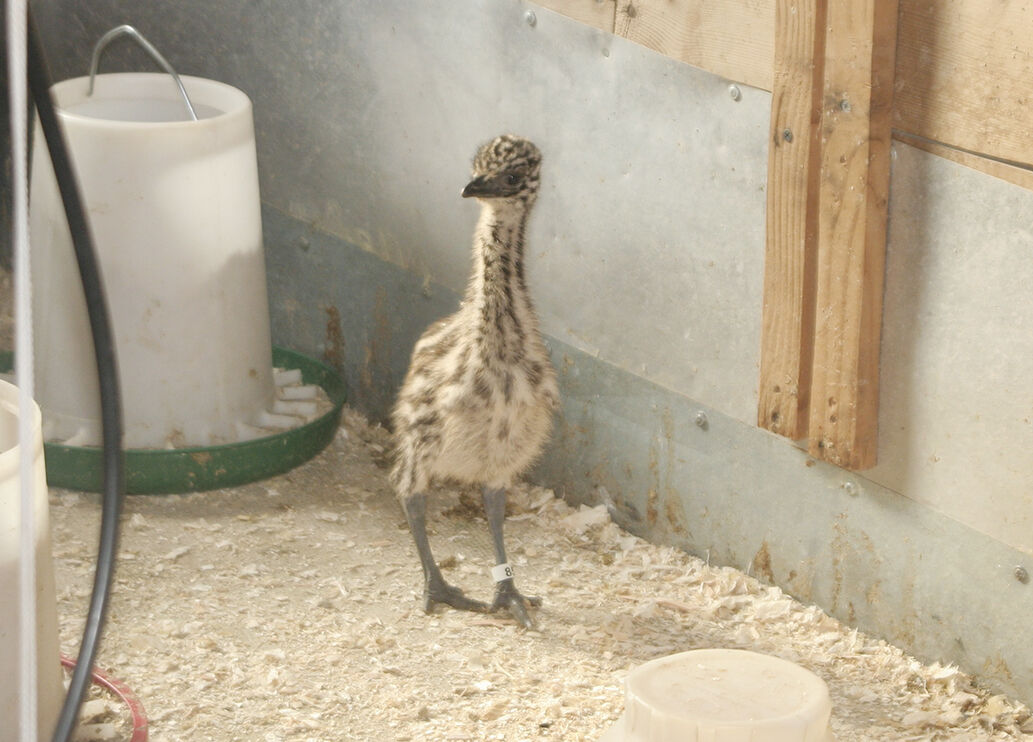 A 2-week-old emu chick in its pen. 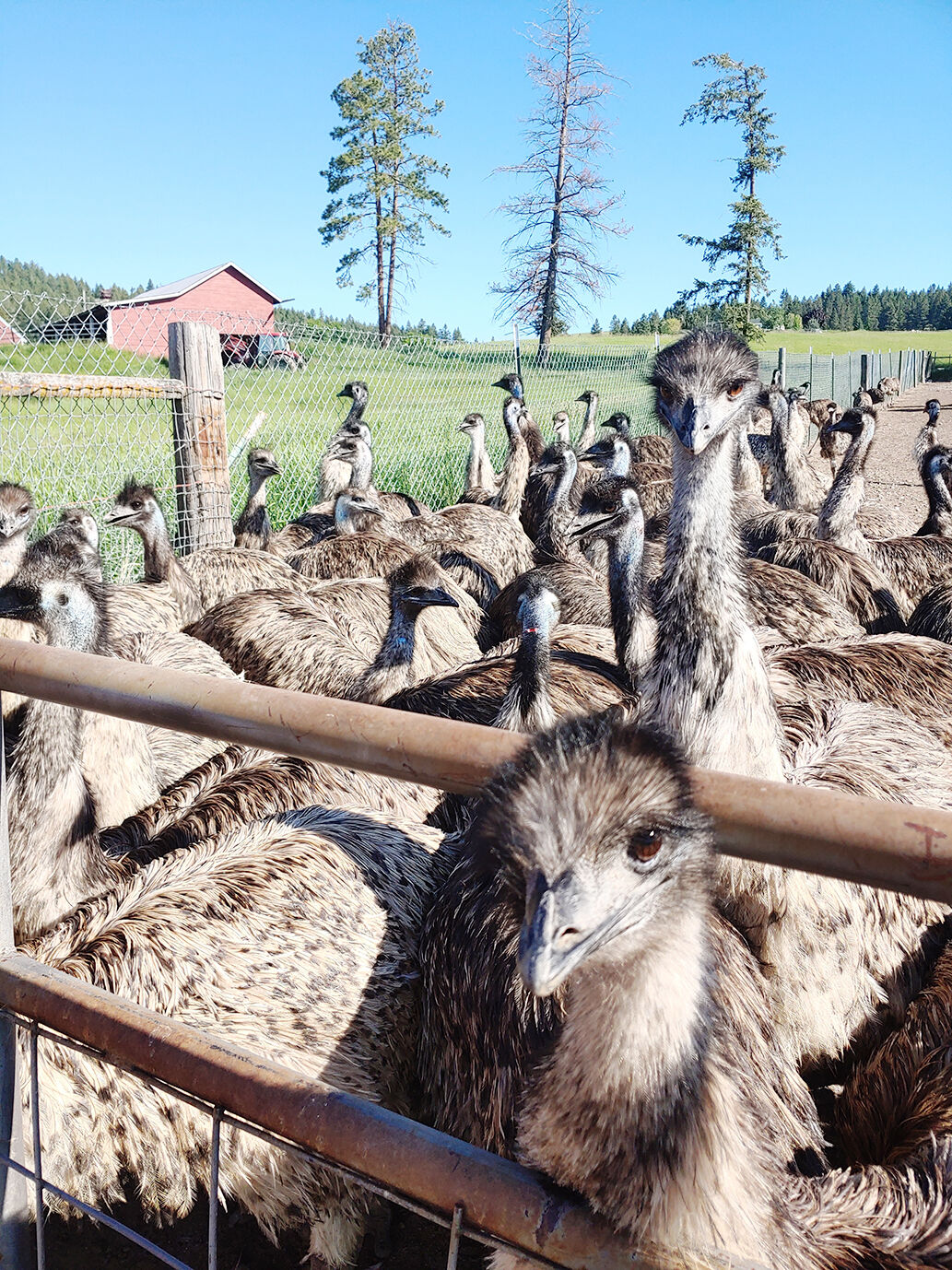 Year-old emus cluster near the corner of their pen June 22 on the Montana Emu Ranch. 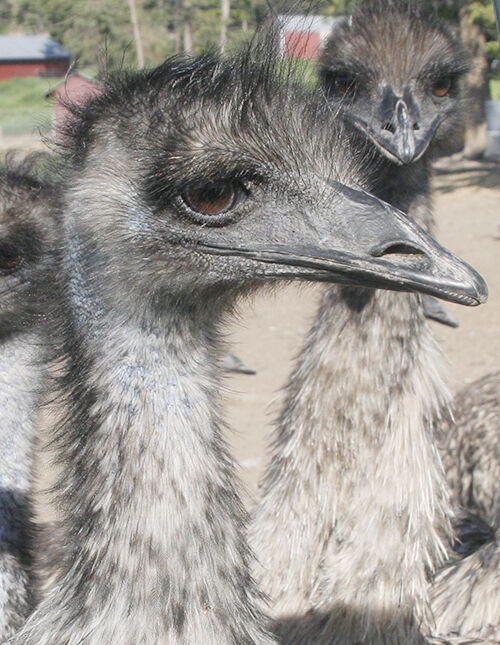 Emus at the Montana Emu Ranch.

Rancher Don Collins with some of his emus.

A 2-week-old emu chick in its pen.

Year-old emus cluster near the corner of their pen June 22 on the Montana Emu Ranch.

Emus at the Montana Emu Ranch.

About 20 of the large, flightless birds immediately flocked around him.

That curiosity makes working with them tricky, Collins said. A farmer might feel a pinch from a beak or get a tool snatched out of his hand.

“Anything that’s different, they will peck at,” he said. “Especially shiny stuff.”

It’s a quiet Tuesday morning on Collins’ Kalispell, Mont., ranch, except for the drum beat vocalizations of the emu hens and the occasional grunts of the males.

Collins, 64, good-naturedly chats about emus. He knows these birds — he’s run one of the nation’s largest emu ranches since 1992, raising 600 emus at a time on his 40 acres.

Some people incorrectly confuse emus with ostriches, which are territorial and ornery. “If these were ostriches, I’d be dead,” he said as he emerged from a pen.

Emus don’t graze and can’t be turned out to forage. They must remain penned and require high-protein pelletized grains.

On the rare occasion that an emu slips out of a pen, it won’t run.

“They are a very flock-oriented creature,” Collins said. “If one gets out by itself, it’s back over there, (by) the fence, wanting to be with the other ones.”

Emus were once supposed to be the “next big thing” for American ranchers. Collins got in the business back then, and never got out. He’s been raising them for nearly three decades.

He thinks the flightless emu could soar again in the marketplace.

Emus then and now

Native to Australia, emus are ratites, a group of flightless birds that includes ostriches, rheas, cassowaries and kiwis.

Most emus in the U.S. today are remnants of zoo stock from the 1930s and 1940s, Collins said. Emus were so prolific that some zoos sold them into the exotic bird market.

In the early 1990s, emus were touted as an alternative to beef. USDA representatives visited Australia to learn more about the birds, intending to provide emu meat to Third World countries.

“You can produce about 9,000 pounds of red meat on the same space required to produce 500 pounds of beef,” Collins said. “Especially living in highly populated smaller countries, that’s important.”

As interest in emus surged in the 1980s and 1990s, producers ramped up breeding. At the peak, there were 1 million emus in the U.S., Collins said.

“People figured out how to raise the birds before they had a market to sell them,” Collins said. “A lot of producers got in because they were supposed to make money hand-over-fist selling breeding stock.”

Most investors were in their 50s or 60s back then, Collins said.

“A lot of them found out how much work it is,” he said. “Maybe they’d never been in agriculture before or been around animals before.”

Today, emu ranches remain, but not as many.

According to the 2017 USDA Ag Census, there’s at least one emu-growing operation in each of the lower 48 contiguous states.

The census lists 210 emu operations with sales, and more than 1,500 operations with inventory, estimating a total population of 11,535 emus in the U.S. That’s the only emu data the USDA tracks, communications director Tara Weaver-Missick said.

The total number of farms or homes with emus is probably more than double that, said Joylene Reavis, secretary of the American Emu Association and a former emu rancher near Madison, Wis.

“These are just the ones who report them to the USDA,” Reavis said.

The most famous emu is likely the “Limu Emu,” which appears in Liberty Mutual Insurance Co. television advertisements, but Collins doesn’t care for that characterization.

“It’s humanizing something that is intended for food, and that puts a negative angle on it,” he said.

Life on the emu ranch

In 1992, Collins was working in the wholesale beverage industry. Penni, his wife, worked as a motorcycle shop manager.

They bought their first pair of emus, expecting the birds to produce supplemental income.

“Then we got so involved in it, it became our primary income,” Collins said.

Collins had to initially cover the costs of land, equipment and improvements, but has been profitable for at least 15 years, he said.

In 1998, they established a “Laid in Montana” brand, referring to the emu’s green eggs. They incorporated as the Montana Emu Ranch Co. in 2004. Now, Collins estimates, they’re one of the top 10 emu ranches in the country.

They also raise 25 acres of hay for sale and keep four horses.

The ranch has 11 full-time employees and three or four part-time workers.

Collins used to offer tours for school and 4-H groups, but didn’t want to worry about the extra level of precaution needed when mixing emus with the public.

People still stop to take photos of the birds from the road, he said.

“There was some concern at first, but they’re not noisy, they’re not stinky,” Collins said.

The ranch smells more like the straw, barley and wood shavings used for bedding than anything else.

“If you’ve been around a hog farm, you know what odors are, and these aren’t anything like that,” Collins said.

An emu hen can produce 30 to 40 chicks a year, compared to llamas or cattle, which usually produce one calf each year.

Emus lay eggs during the winter. Collins starts collecting eggs in November and incubates them in January. Every two weeks, he puts a new batch of 50 to 90 eggs in the incubator. The birds stop laying in April, and hatching is usually finished by June 1. The birds require heat until they are 2 to 4 months old, depending on the weather.

An ostrich rancher might have to create a diversion to safely collect eggs. The emu rancher can simply tip over one male — they’re the ones usually sitting on the eggs — and move along to the next.

Emus aren’t territorial or aggressive, although they’ll fight back if frightened.

“But as far as them tracking you down and pounding you into the dirt, they’re not gonna do that,” Collins said. “Ostriches actually will.”

Emu eggs are edible. Collins makes money boiling and disinfecting the eggs, selling the shells for $15 to $20 each to crafters for painting or carving.

“You can’t sell them for that price as an eating egg,” he said.

“Distributors are used to moving truckloads of meat, where we only produce a couple pallets,” he said. “The whole industry, you might get a couple big truckloads, but that would be about it.”

Collins recoups his processing costs with meat sales as a byproduct. He cited a 2000 University of Wisconsin-Madison study on alternative meats — including ostriches and rheas — declaring emu to be one of the healthiest meats, based on vitamin and iron content, protein and lack of saturated fat.

Collins said his ranch makes most of its money with another product.

Those U.S. visitors to Australia in the 1990s learned emu fat was an “ancient Aborigine remedy” to relieve aches and pains, Collins said.

“In fact, they saw an old Aborigine sitting on a log, he ... was putting his hands in the emu fat and rubbing it on his knees,” Collins said. “They asked him why he did that and he said, ‘It makes the pain go away.’ That kind of lit some light bulbs and created a whole different market.”

“You can make a lot of skincare products out of a gallon of emu oil,” Collins said.

He sells his line of products in nearly 2,000 health food stores nationwide. Other ranches sell them worldwide, he said.

An array of products such as oils, facial and body creams and lotions are made on the ranch in a cosmetics laboratory regulated by the U.S. Food and Drug Administration.

“You need to test and prove everything that you state” on the label, Collins said. “It gets really difficult at times, because you’re regulated to the point you can’t tell people exactly how to use the product or what it’s to be used for. It’s a matter of wording and just being careful.”

The emu oil market continues to grow, Collins said. Emu oils can also be used as a complement to cannabidiol, or CBD, the health-related chemical from hemp plants, Collins said.

Some larger oil companies use 1-2% emu oil in their products to stretch it because they can’t find an affordable supply, Collins said. He uses between 20% and 100% emu oil in his products.

“You’ve still got to produce the birds to meet the demand,” he said.

The COVID-19 pandemic prompted the cancellation of the American Emu Association’s annual convention in 2020. A new date hasn’t yet been set, said Reavis, of the association.

Many fairs, festivals and farmers markets were also canceled, creating a lack of venues where farmers would normally sell their emu products, she said.

Processing plants were also shut down, creating a backlog. “This has been a problem for both livestock owners and emu growers,” Reavis said.

For Collins, in-store sales that were lost during the pandemic are now rebounding, but online sales jumped, he said.

Collins hopes to retire in the next 10 years. He’s looking for someone to take over and continue his established brand.

“We’re not going to take over the world, that’s not our goal,” he said. “If somebody else wants to jump into it and expand it, it’s there.”

The ideal emu rancher might be someone with an entrepreneurial drive, and experience raising livestock.

Overall, he said, he’s happy with the way his emu ranch has progressed over the years.

“I think we’ve had a very good life,” Collins said. “Much better than we would have if we had just continued with our jobs. We did quite well.”

Emus at a glance

• Live for about 30 years, may produce eggs for more than 16 years

• Female is dominant member of the pair

• Male sits on the nest

• Products include leather, meat and oil

Here's how Oregon's manufacturing sector can expect to grow