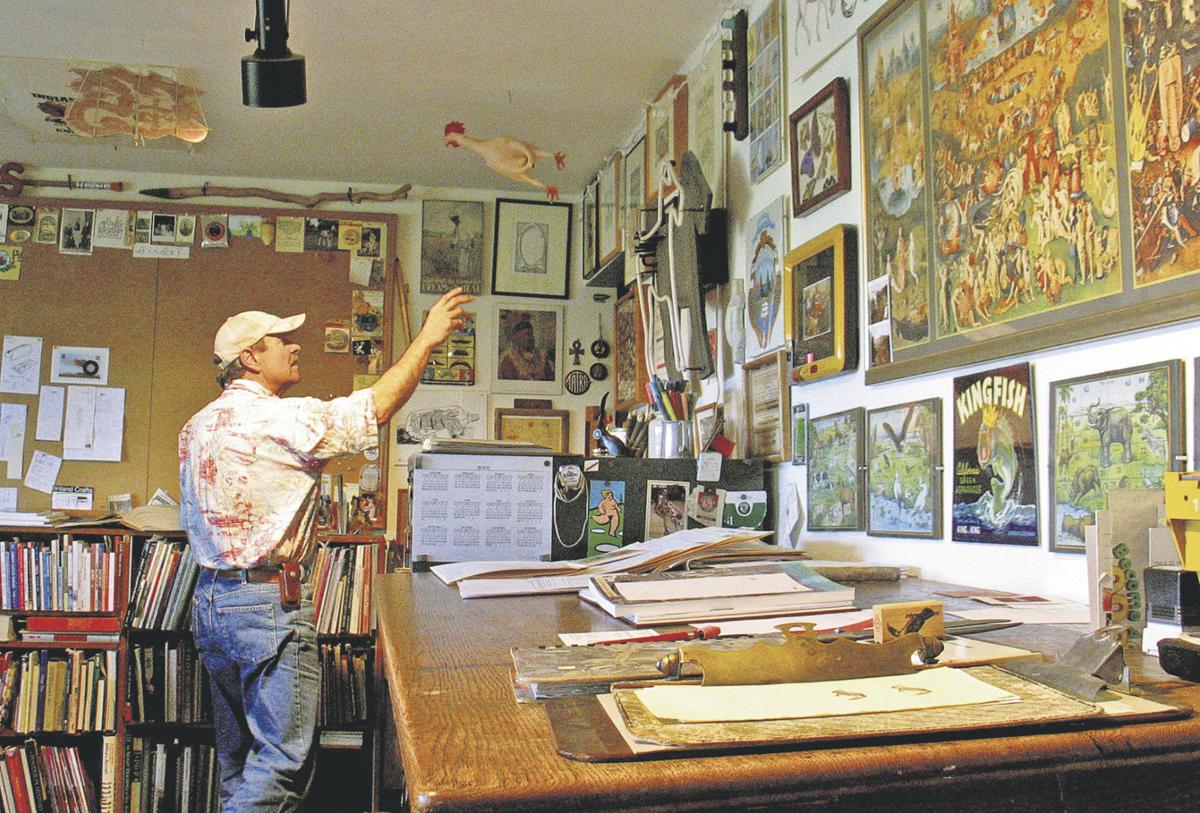 Matthew Weaver/Capital Press Harrington, Wash.-based farmer Leslie LePere walks through the studio where he does his artwork. the afternoon of April 30 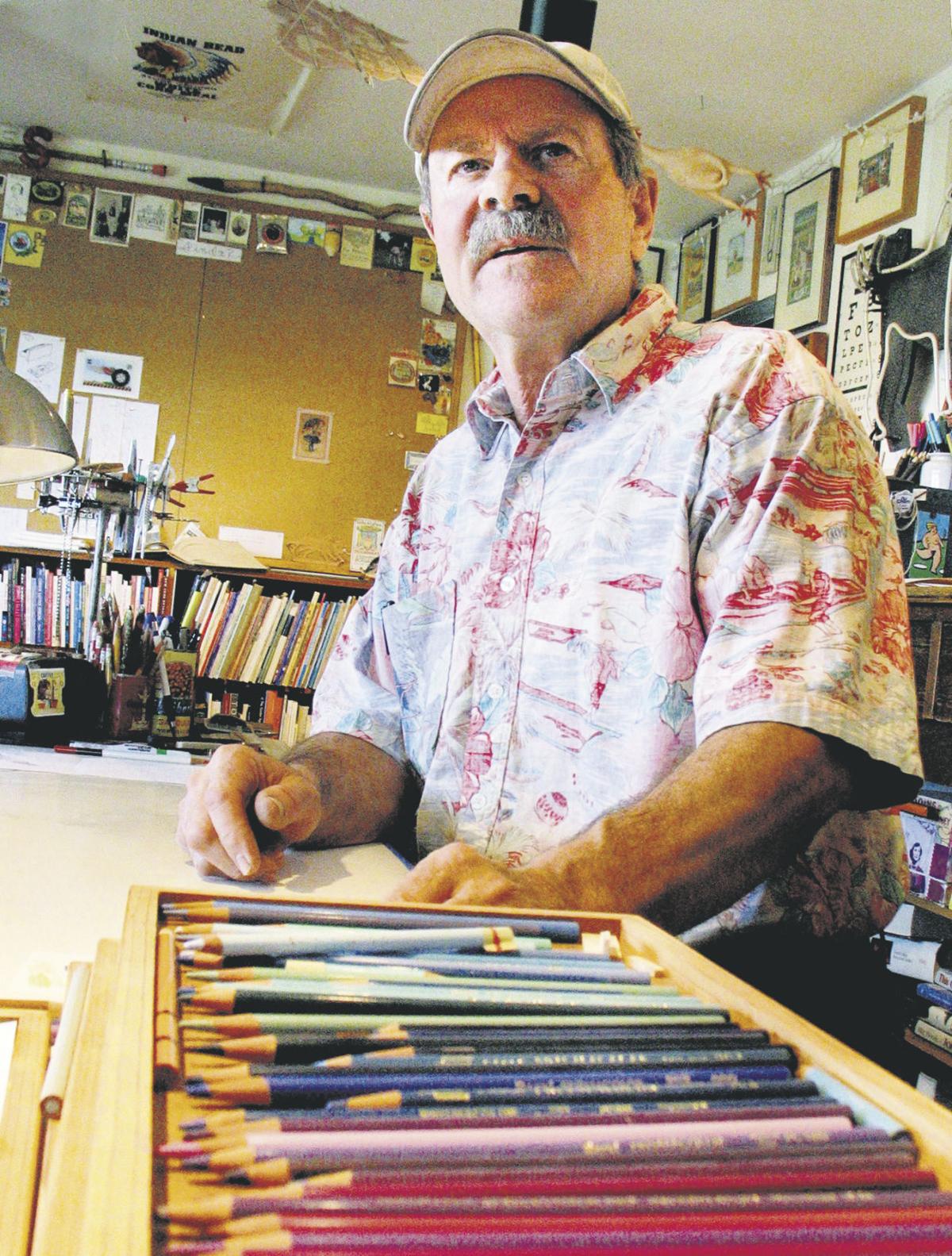 Matthew Weaver/Capital Press As an artist, Harrington, Wash.-based farmer Leslie LePere has many tools at his fingertips, including a long row of colored pencils. 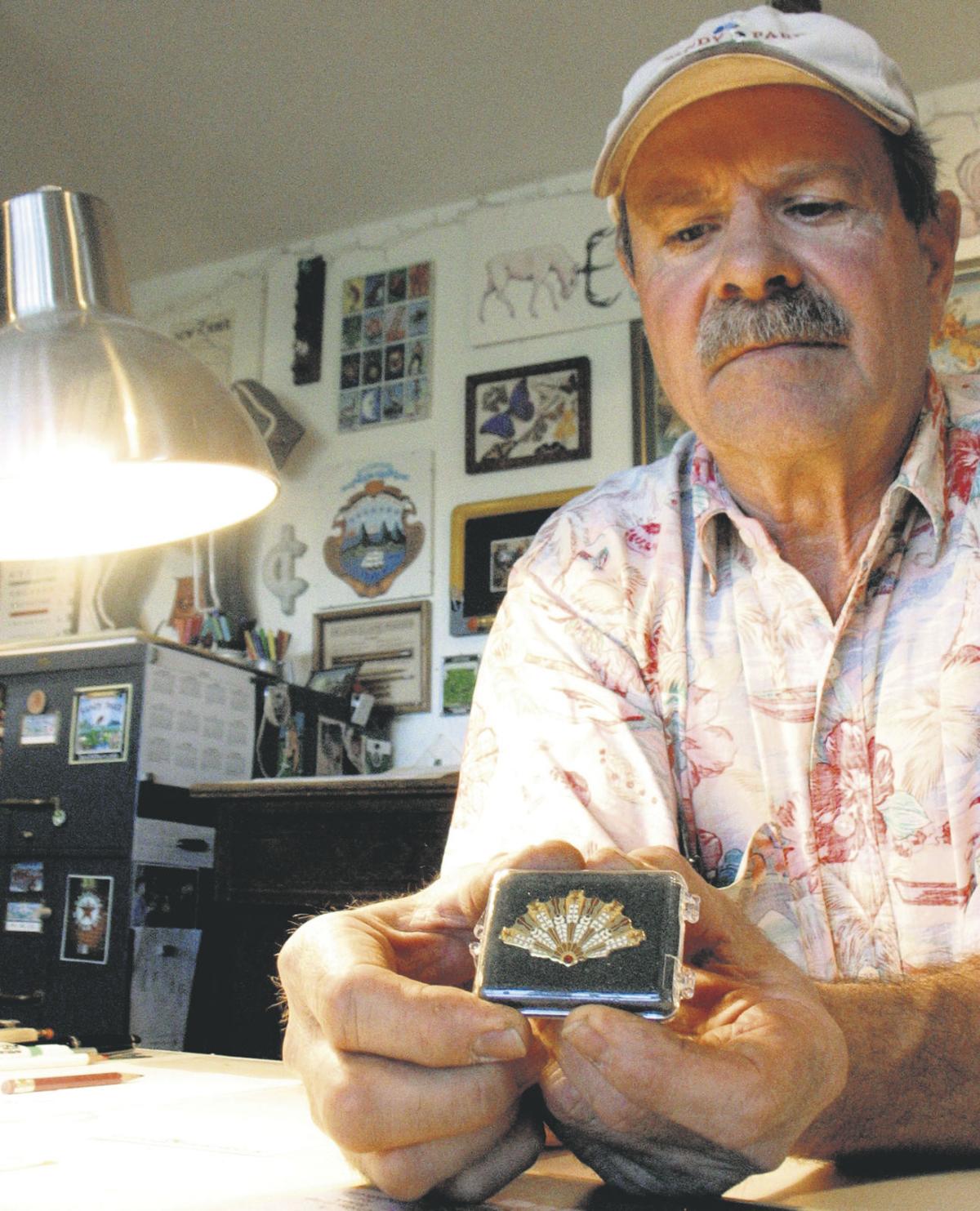 Harrington, Wash.-based farmer Leslie LePere holds one of his commemorative pieces. he designed in his other job the afternoon of April 30. LePere considers himself both a farmer and an artist.

Matthew Weaver/Capital Press Harrington, Wash.-based farmer Leslie LePere walks through the studio where he does his artwork. the afternoon of April 30

Matthew Weaver/Capital Press As an artist, Harrington, Wash.-based farmer Leslie LePere has many tools at his fingertips, including a long row of colored pencils.

Harrington, Wash.-based farmer Leslie LePere holds one of his commemorative pieces. he designed in his other job the afternoon of April 30. LePere considers himself both a farmer and an artist.

Leslie LePere doesn't consider himself only a farmer.

Nor is he just an artist.

Nope, the Harrington, Wash.-based resident is both.

"I'm half-artist and half-farmer," he said. "Each one of those complements each other. Each one is extremely different, but I like to be able to switch back and forth. It invigorates my interest in both of those fields."

On a farm with the nearest neighbors miles away, LePere's mother always made sure young Leslie was able to entertain himself.

"Included in that entertainment was a set of crayons, paper and pencils," he said.

LePere said his mother, father and sister were all creative as well. He thinks it may have rubbed off onto him.

"Essentially nothing has changed since I was 5," he said. "I'm still playing in the dirt and drawing pictures."

LePere raises soft white wheat and hard red wheat on the farm. Due to lack of rainfall, he was expecting a less-than-average year this year.

He was raised on the farm, but moved to Seattle for about eight years beginning in 1972 after earning his master of fine arts degree in design and painting.

In 1973, author Tom Robbins contacted LePere after seeing his work in Pioneer Square and asked him to design a cover for his novel "Even Cowgirls Get the Blues." That cover wasn't selected at first, but LePere later did the redesign for the paperback version of the novel.

Tired of the "rat race" of the city, he returned to his family farm in 1980 when his father was ready to retire.

Since then, he has designed more covers for Robbins, including the cover and illustrations for the recently released "B Is For Beer," and he received an award for the 1986 novel "Still Life With Woodpecker."

"I have a sketch board in the tractor I spray with, and so when I'm spraying, I can jot down my wiggly ideas," he said. "When I get home at night, I can interpret them and take them to a little more advanced stage."

Sandy Parr partner Charlie King has known LePere since college, and called him one of the finest individuals he knows.

"Les is one of these guys that can go out and fix a piece of farm equipment, paint a rig, wire a house, do just about anything imaginable at a high level of efficiency, and then come into his studio and be able to express his sense of humor and passion for the visual correlation of objects," King said. "It's an amazing juxtaposition, similar to the objects he uses in his artwork."

In 2008, LePere designed the commemorative pin for the 50th anniversary of the Washington Wheat Commission, presented to past presidents of the organization at the Washington Association of Wheat Growers.

"We tried to make something that was reflective of the grain-producing area of the Eastern Washington area," LePere said.

"His excitement about what he does is refreshing," Yates said. "Art is his passion; farming is his roots."

The process of designing the pin for the anniversary took several months, Yates said, and he was a bit concerned LePere would become impatient.

"But he was so understanding of our wanting to come up with an image that would sum up the industry," Yates said. "In the end, the design was a collaboration that we could all be happy with."

LePere said he plans to continue both farming and his artwork, noting people can have more than one interest. Finding a balance is the key, he said.

"Figure out something you like to do and enjoy it, because life is short," he said. "You should figure out a way of life and an attitude to approach your life's work with in order to achieve happiness."

Matthew Weaver is based in Spokane. E-mail: mweaver@capitalpress.com .