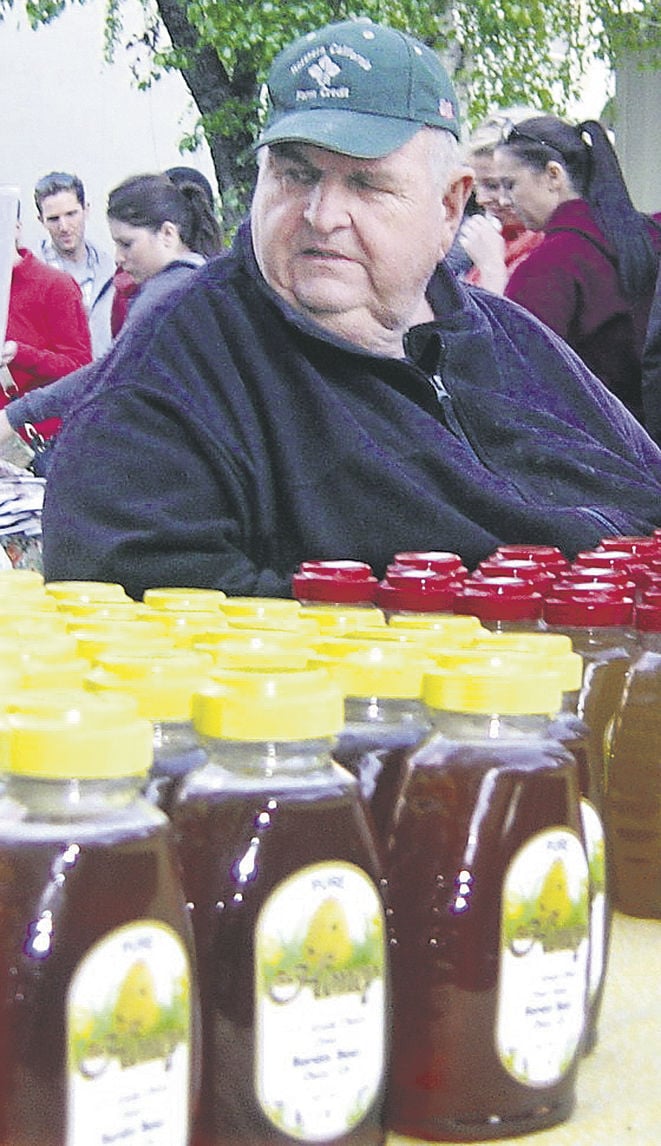 Tim Hearden/Capital Press Honey producer Richard Bordin of Chico, Calif.., showcases his products at the season-opening Thursday Night Market in Chico on April 5. BordinÕs production didnÕt decrease in 2011, but many other producersÕ did.

Tim Hearden/Capital Press Honey producer Richard Bordin of Chico, Calif.., showcases his products at the season-opening Thursday Night Market in Chico on April 5. BordinÕs production didnÕt decrease in 2011, but many other producersÕ did.

Colony numbers down, but prices jump to record levels in 2011

CHICO, Calif. -- Honey production in California declined dramatically in 2011, according to a government report.

California's 370,000 honey-producing colonies were down 10 percent from the previous year.

That mirrors a nationwide trend. U.S. honey production in 2011 from beekeepers with five or more colonies totaled 148 million pounds, down 16 percent from 2010, NASS reported.

For Chico, Calif., farmer Richard Bordin, who was peddling several flavors of honey at a farmers' market here April 5, last year's production was about even with 2010. But he knows many other producers for whom production dropped, he said.

The causes of the decline are varied, said Eric Mussen, extension apiculturist at the University of California-Davis. A big factor is whether beekeepers think they can make a better profit by producing honey or pollinating crops, he said.

"The second thing that impacts all this is whether or not the flowers that produce the nectar ... are available," Mussen said. "That's all weather dependent. It's got to rain at the right time and in the right amount."

Also, if more bees are put on citrus trees in a given season, the bees are "sharing the wealth," which could reduce everyone's honey yields, Mussen said.

Mussen said California's warmer weather this month may help with honey production, as it takes heat to push nectar through flowers.

"All these things add up together," he said. "Beekeepers have to think about (the question), 'Was it wet enough this winter?'"