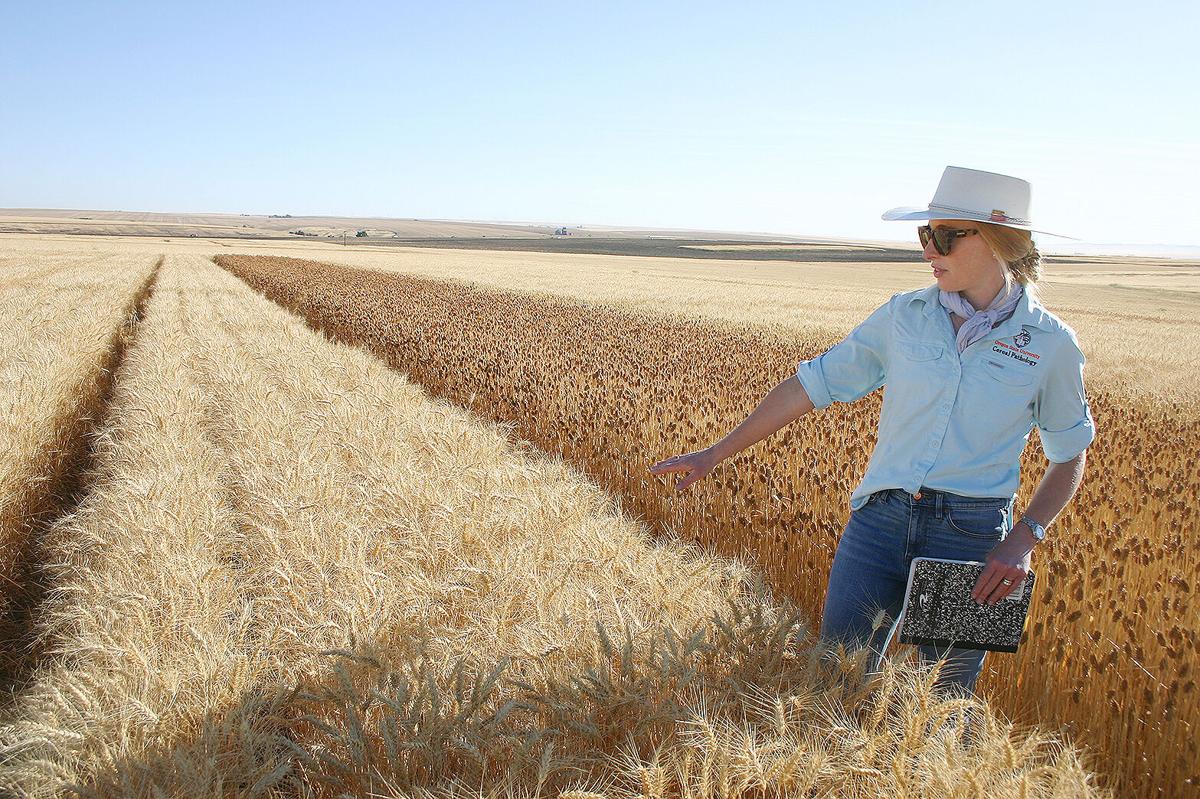 Christina Hagerty, a plant pathologist at the Columbia Basin Agricultural Research Center, serves as one of the project leaders for the station’s Resilient Dryland Farming Appropriation. 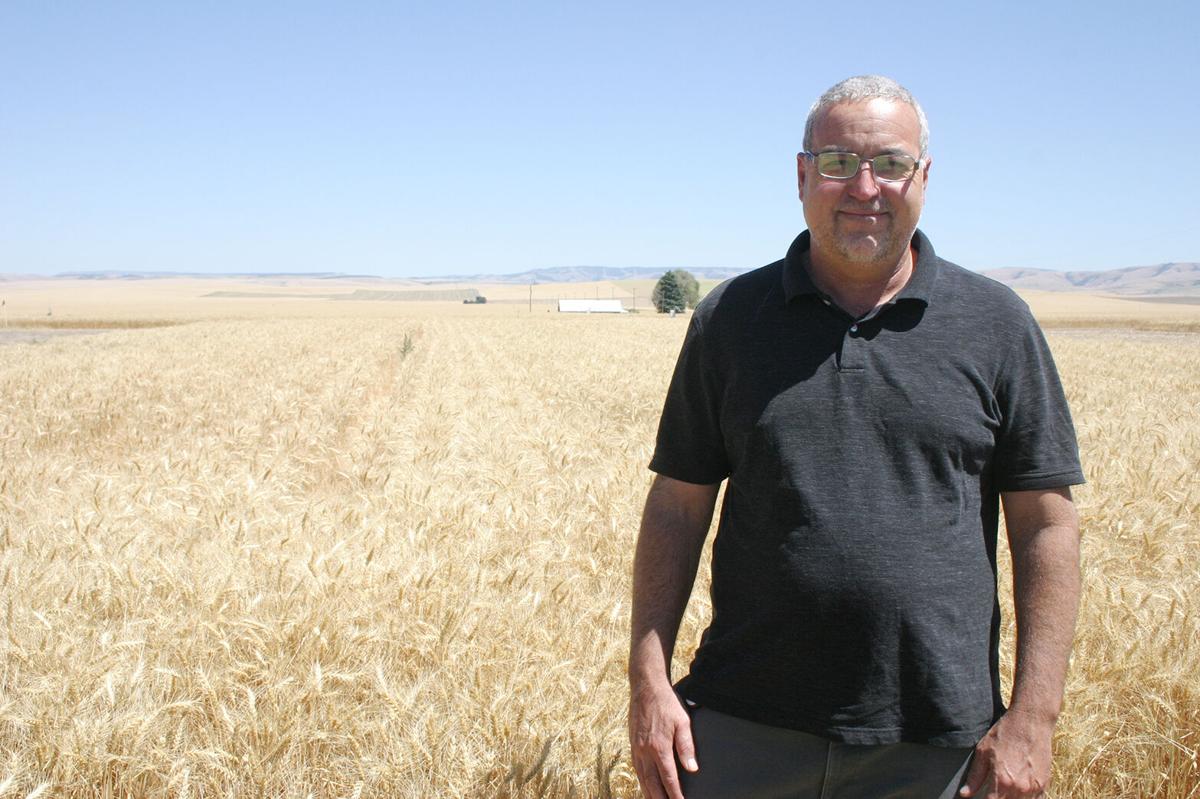 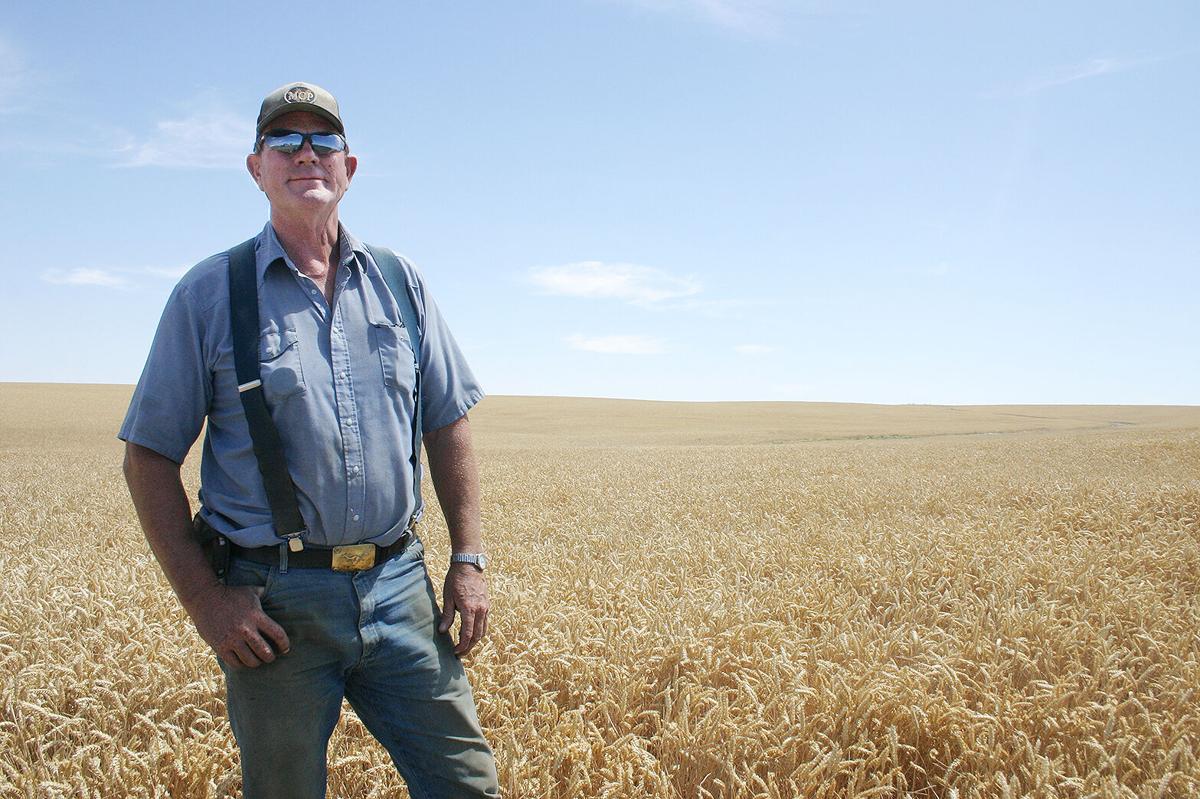 Darren Padget, a wheat farmer and president of the U.S. Wheat Associates, stands along one of his fields in Grass Valley, Ore. 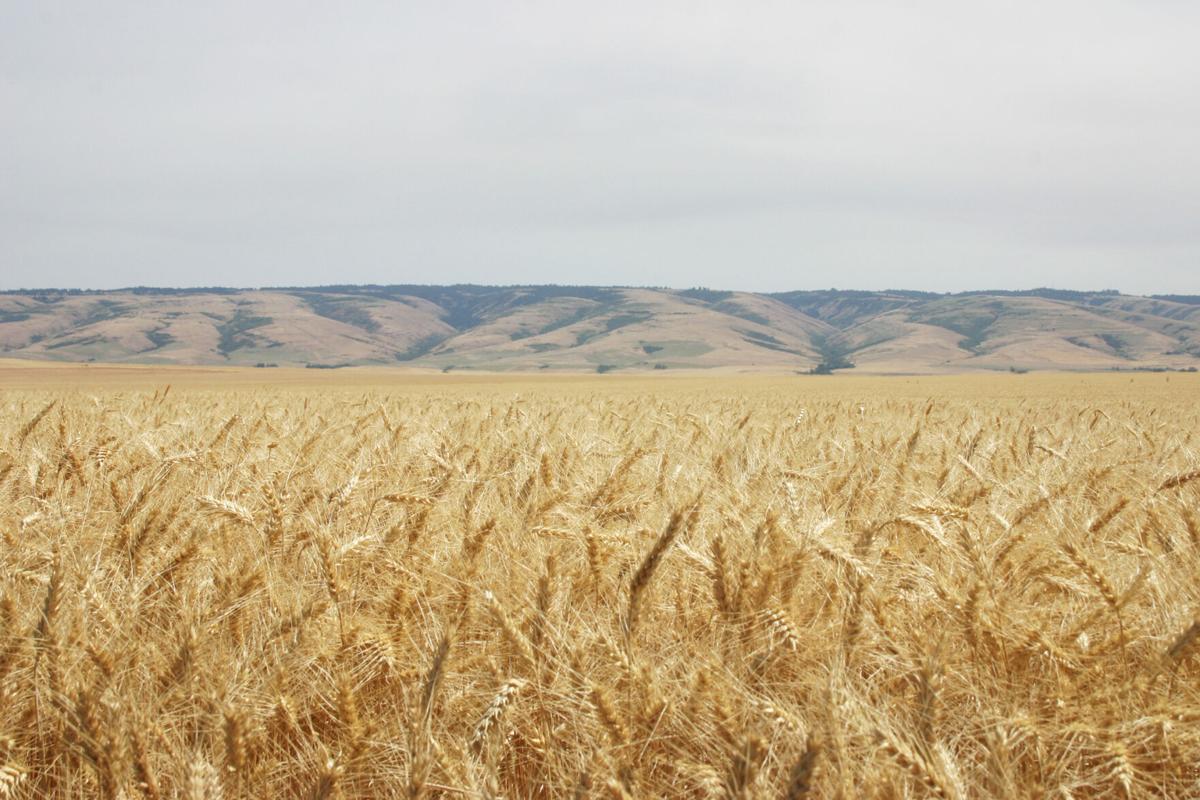 A field of wheat at the Columbia Basin Agricultural Research and Extension Center north of Pendleton, Ore., with the Blue Mountains in the distance. The area receives more precipitation, up to 18 inches annually, compared to other areas of the Columbia Basin. 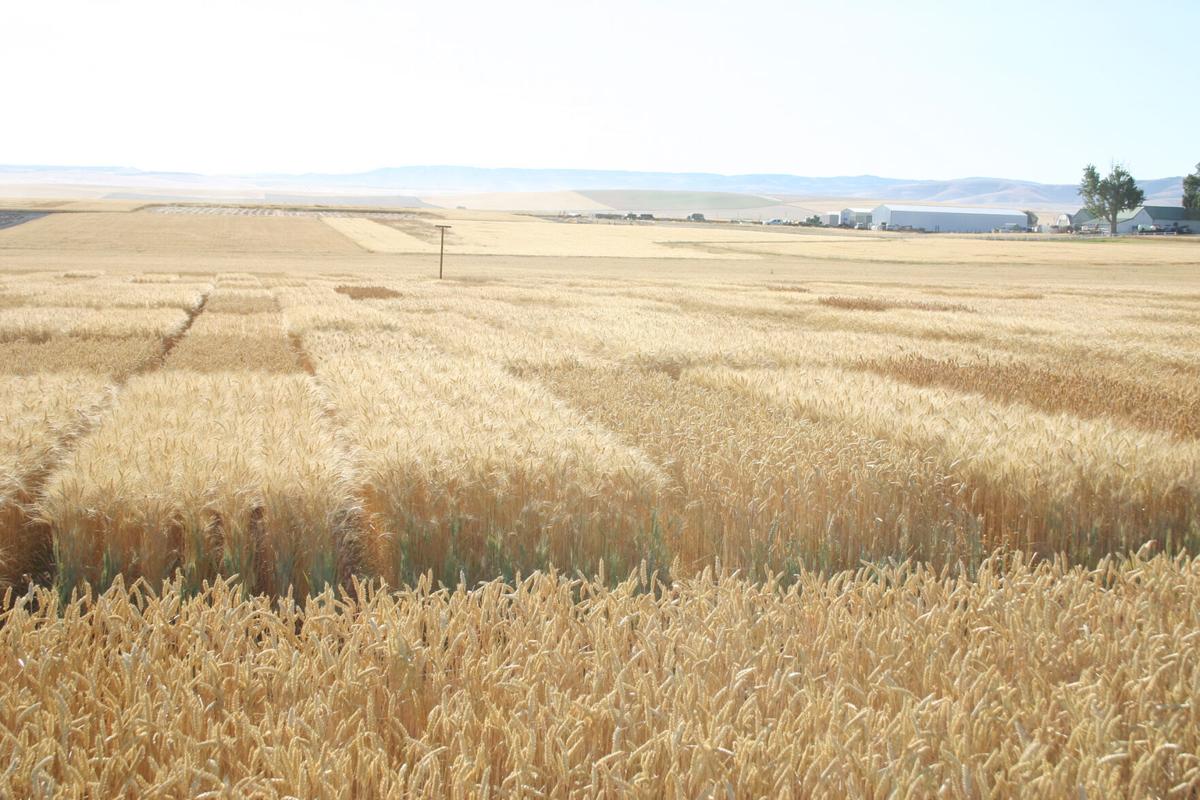 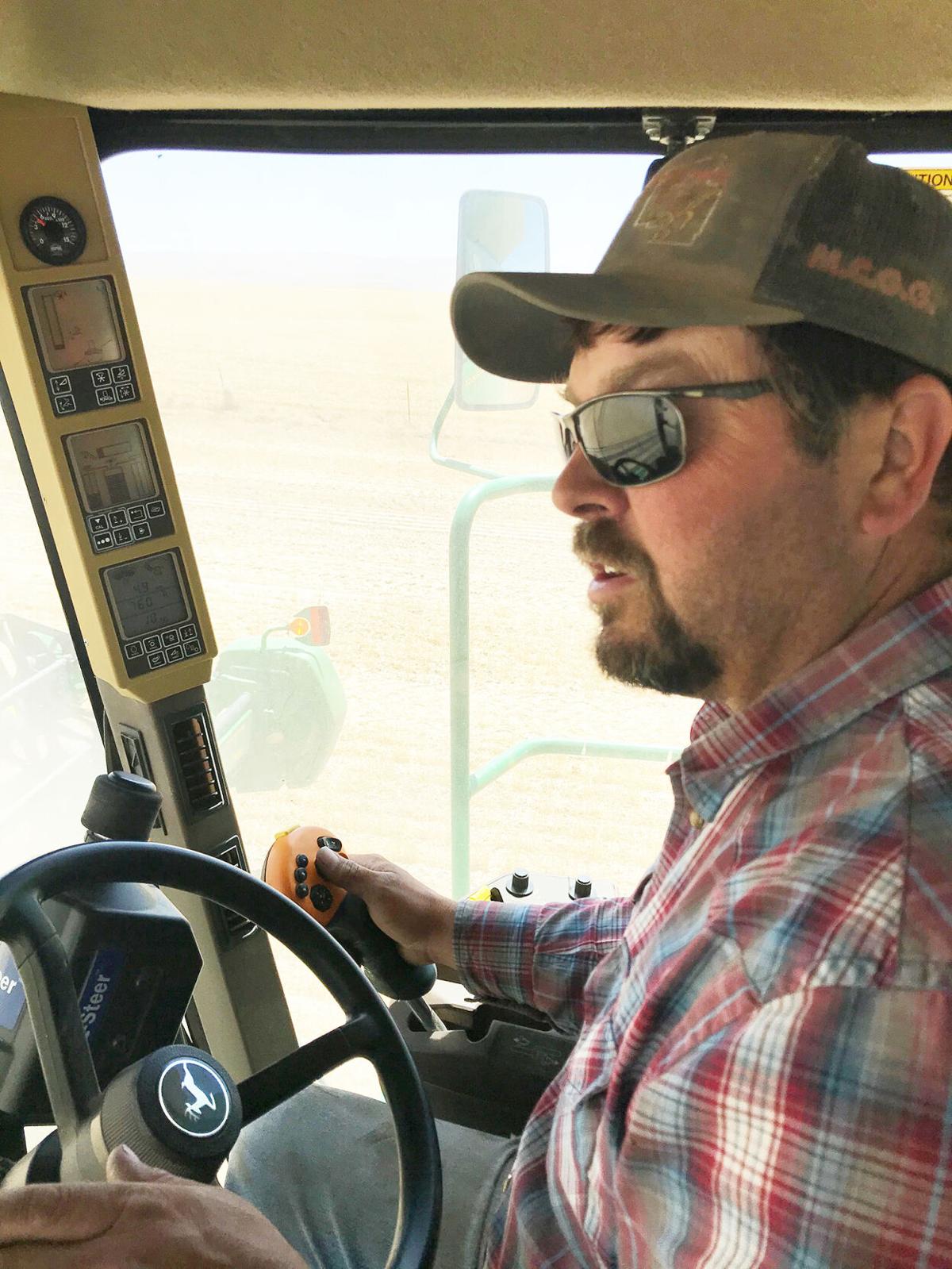 Eric Orem, a wheat farmer in Morrow County, Ore., behind the wheel of his combine during harvest. 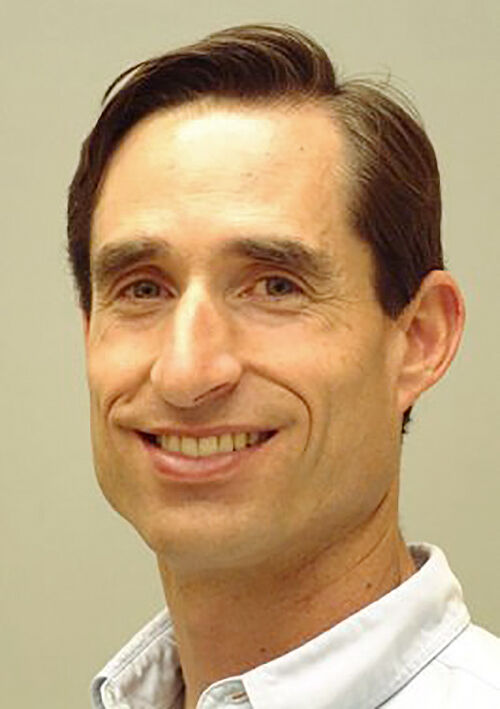 Christina Hagerty, a plant pathologist at the Columbia Basin Agricultural Research Center, serves as one of the project leaders for the station’s Resilient Dryland Farming Appropriation.

Darren Padget, a wheat farmer and president of the U.S. Wheat Associates, stands along one of his fields in Grass Valley, Ore.

A field of wheat at the Columbia Basin Agricultural Research and Extension Center north of Pendleton, Ore., with the Blue Mountains in the distance. The area receives more precipitation, up to 18 inches annually, compared to other areas of the Columbia Basin.

Eric Orem, a wheat farmer in Morrow County, Ore., behind the wheel of his combine during harvest.

PENDLETON, Ore. — Experimental plots of wheat unfold across the Columbia Basin Agricultural Research Center like a patchwork quilt of amber and gold.

Christina Hagerty, an assistant professor of cereal pathology at the station 7 miles north of Pendleton, walked through the fields on an early July morning pointing out various trials — everything from tests of new wheat varieties to new techniques for managing weeds and diseases.

Each trial could ultimately impact farmers’ bottom lines. “As researchers, we need to lose our shirt before the farmer does,” Hagerty said.

The purpose of the center, commonly known as CBARC, is to improve dryland farming practices in a region that receives little precipitation.

Research funded by two new congressional appropriations will help the center’s scientists from Oregon State University and the USDA Agricultural Research Service unlock the secrets of dryland farming and its impacts on climate change.

One appropriation seeks to develop dryland farming techniques that can improve soil health and save farmers money by requiring less fertilizer, herbicides and other inputs.

The other is to study soil carbon sequestration and the overall carbon footprint of dryland farms in the region — critical information to determine whether growers can profit from participating in future carbon markets.

“Dryland wheat farmers are the most innovative folks you will ever meet,” Hagerty said. “We need to fight for the good work our growers are doing.”

The funding also marks a dramatic change of fortune for the station after years of fighting for its budgetary life.

Established in 1931, CBARC is one of 11 research centers run by OSU in different growing regions around the state.

The USDA also shares space at the station, which it calls the Columbia Plateau Conservation Research Center. Though technically separate, they have similar missions to enhance dryland farming in the arid Columbia Basin.

However, the center faced a crisis in 2016 and 2017, with budget cuts threatening nearly half the annual funding on the USDA side.

The Oregon wheat industry lobbied to save the center’s funding, but Greg Goad, a Pendleton-area farmer, said more was needed to find a stable injection of resources.

“It became clear to us that this was not a good long-term strategy for dealing with the problem,” Goad said.

Goad, who describes himself as semi-retired, serves on a grower liaison committee that works with both the USDA and OSU research programs. He said their focus became identifying proposals that could catch the eye of Congress and policymakers — hence the focus on climate change.

“We could see where we could be a help on carbon, and at the same time help the growers,” Goad said.

“It will assure data specific to the regional differences in Oregon and will ultimately lead to increased profitability and crop yield — good for our agricultural economy, our environmental stewardship and our rural economies,” Hoey said.

The vast majority of that production comes from Umatilla and Morrow counties, which together have roughly 61% of the total wheat acreage.

Annual precipitation varies by location. For example, the Pendleton station, nestled along the Blue Mountains, gets 16-18 inches, while areas farther west get as little as 8-10 inches. As a result, most dryland farmers rotate their fields between growing a crop one year and leaving it fallow the next to rebuild soil moisture.

Francisco Calderon, CBARC station manager with OSU, said research must be tailored to this particular system.

“We cannot use data from the Midwest,” Calderon explained. “The answers to our questions about soil carbon have to be developed locally.”

Calderon knows the differences all too well. He came to OSU after 18 years working for the USDA in eastern Colorado.

Despite both regions producing dryland wheat, climatic differences mean Colorado farmers receive more moisture in the form of summer thunderstorms, as opposed to the Pacific Northwest, where most precipitation falls in the winter.

The timing allows farmers in Colorado to rotate wheat with other summer crops such as corn or sorghum. Mother Nature does not give farmers in northeast Oregon that option.

In turn, different farming practices and crops impact the amount of carbon that can be sequestered in the soil.

The new federal appropriations, Calderon said, will work hand-in-hand to answer those questions.

Under the soil carbon research program, OSU and the USDA will evenly split the $1.5 million, combining expertise from both teams across several disciplines.

OSU will also receive one-quarter of the $2 million dryland farming appropriation to do the plot work for cropping trials. Hagerty, who is the project leader for OSU, said it is an opportunity to conduct “team science,” breaking out of their individual research “silos.”

“We can have a much better, broader impact for the growers,” Hagerty said. “No more one scientist, one bench.”

As part of the dryland farming appropriation, Hagerty said studies are underway both at the station and at Starvation Farms in Lexington, Ore., which is in a lower rainfall zone in Morrow County.

She highlighted trials to determine whether certain types of cover and rotational crops — such as winter peas, barley or canola — can naturally improve soil health, break up soil-borne diseases and minimize erosion without sapping too much water from the farms’ cash crop.

“What we’re trying to understand here is, do the benefits outweigh the cost?” she said.

The soil carbon program, meanwhile, is still being finalized, but Calderon said it breaks down into three general objectives.

First is maintaining experiments to see if different growing practices sequester carbon. Second is seeing how weeds and plant diseases interact with changes in soil carbon, and third is analyzing the system’s total carbon footprint.

“That goes beyond just quantifying how much carbon stays in the ground, but how much reducing fertilizer applications, tillage or other things affect the carbon cycle,” Calderon said.

Stewart Wuest, a USDA research soil scientist at the Pendleton station, is one of the project leaders on the soil carbon sequestration study. Additional funding will allow the agency to hire four new scientists, including a bioinformatics expert to do statistical work, and an agricultural economist.

For now, Wuest said he is skeptical of how much more carbon can be sequestered in soils given the limitations of the dryland wheat-summer fallow rotation.

“We want to avoid policies that are unrealistic and ask farmers to do something that can’t be done,” he said. “The main point is to be realistic.”

In 2019, the Oregon Legislature seemed poised to pass cap-and-trade legislation requiring large producers of carbon dioxide and other greenhouse gases to buy “allowances” for every metric ton of carbon they generate.

Such a marketplace would have also allowed farmers to generate credits by sequestering carbon. Companies could also purchase those carbon credits to offset greenhouse gas emissions.

Freya Chay, a policy associate for Carbon Plan, a nonprofit organization based in Santa Cruz, Calif., said offset credits for soil carbon sequestration currently exist in voluntary markets, though they are not yet well defined.

“It’s pretty opaque,” Chay said. “It takes some real tracing to figure out how a ton (of carbon) was quantified.”

Chay said local research like that at CBARC is critical. Without that data, she said independent registries will struggle to quantify and credit soil carbon sequestration.

Meanwhile, farmers say they are in a wait-and-see mode.

Darren Padget, who farms in Grass Valley, Ore., and is chairman of U.S. Wheat Associates, the national organization that serves as the industry’s overseas marketing arm, said the cost of inputs such as fuel and fertilizer are only going up.

“The question is whether any credit that we get will offset our increase in inputs,” Padget said. “We hope it’s a net positive, financially. If it isn’t, then it’s going to be a pretty hard sell.”

Amid lingering uncertainty, farmers across the West are feeling the effects of extreme drought, underscoring the urgency of the research.

Eric Orem, a Morrow County farmer, plans to harvest about 2,500 acres of wheat this year. He anticipates his yield may be down by as much as half in some of his fields, where just 6 inches of precipitation has fallen since planting last fall.

Combined with a heat wave in June that pushed temperatures as high as 118 degrees, Orem said the crop’s quality may also be affected. Most wheat grown in the Pacific Northwest is a lower-protein variety predominantly exported to Asia, where millers use the flour to make noodles, sponge cakes and crackers.

“Conditions have just been tough,” he said. “It’s going to be crop insurance year.”

Orem said he has already done several things to make his operation more efficient. He adopted no-till farming, which saves him money on fuel, and uses variable rate seeding on his seed drills and avoids over-spraying fertilizer and herbicides to save on inputs.

The partnership between growers and researchers in the area has been great, he said, with both sides collaborating for a common good.

“Looking at these programs and seeing what farms can do to benefit our soil health and the environment is great,” he said. “It’s a win-win for everybody.”

In with the old: 'Whole orchard recycling' gains traction