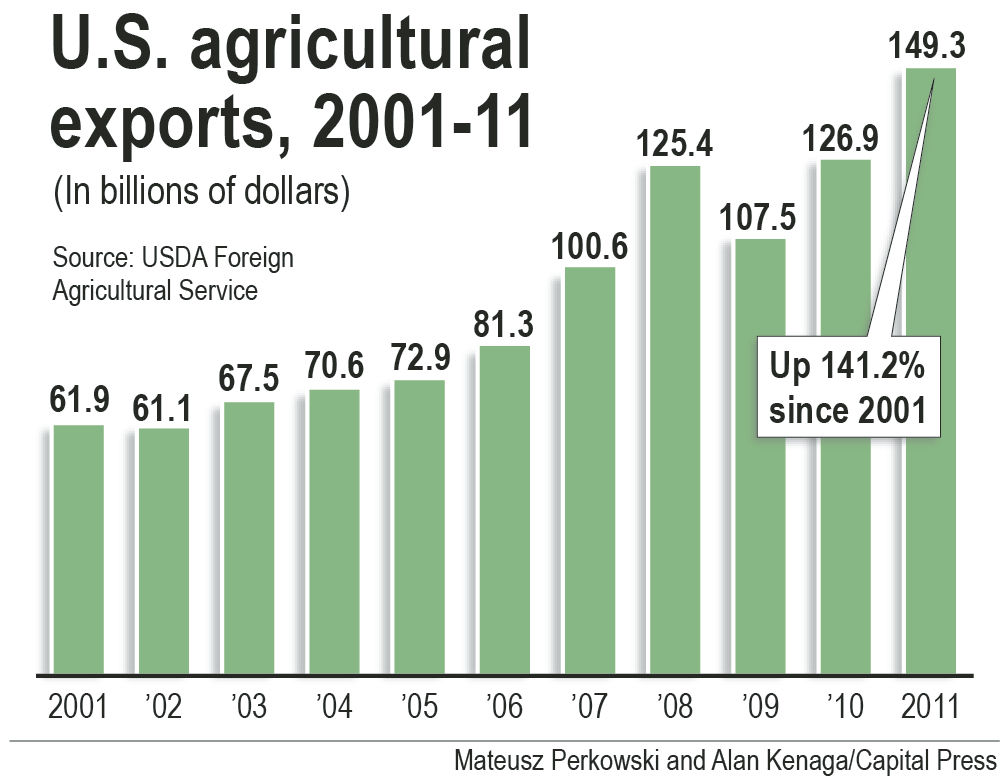 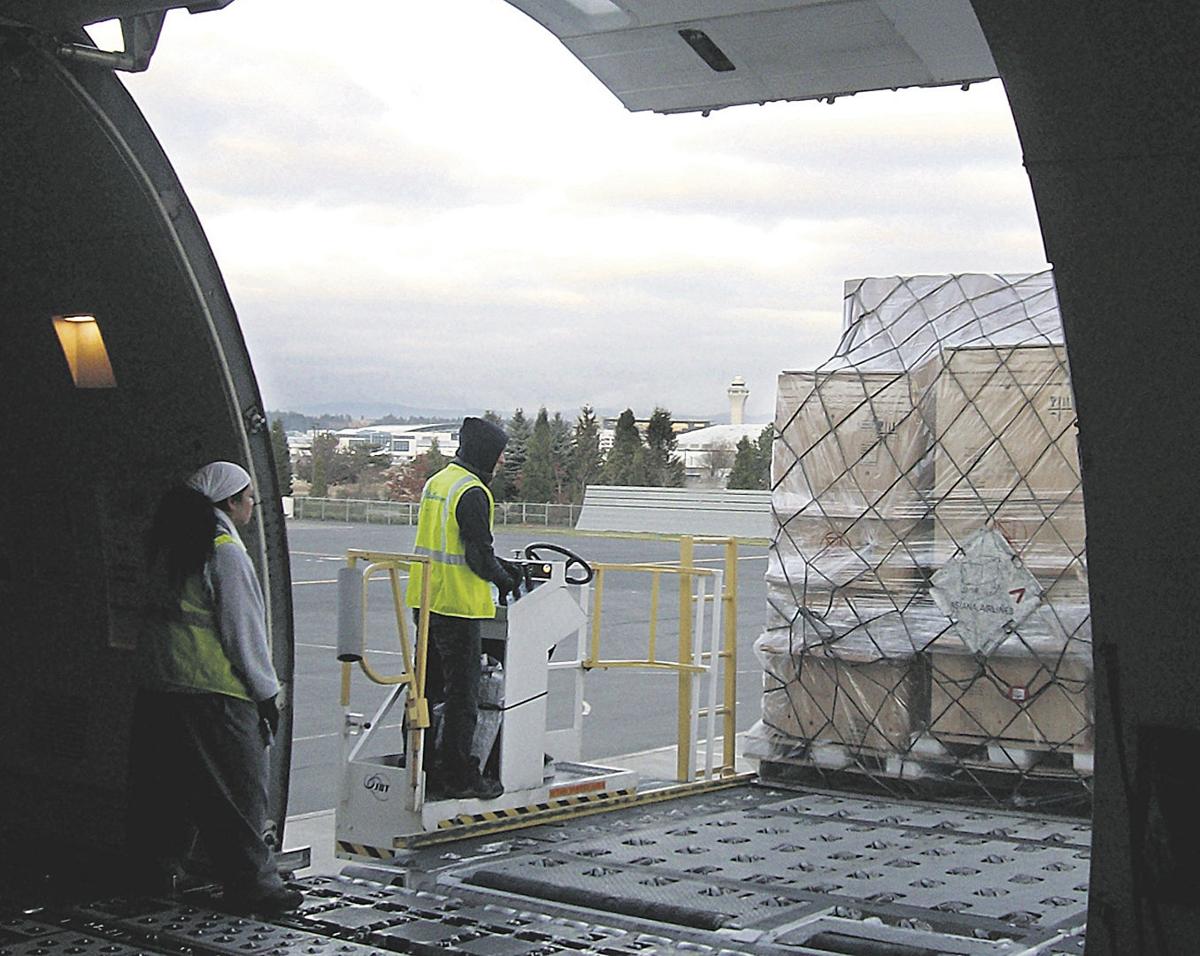 Mateusz Perkowski/Capital Press Workers in Portland prepare to load an Asiana Airlines cargo plane with export goods headed for the Pacific Rim. China, Japan and other countries in Asia are major buyers of U.S. agricultural goods. 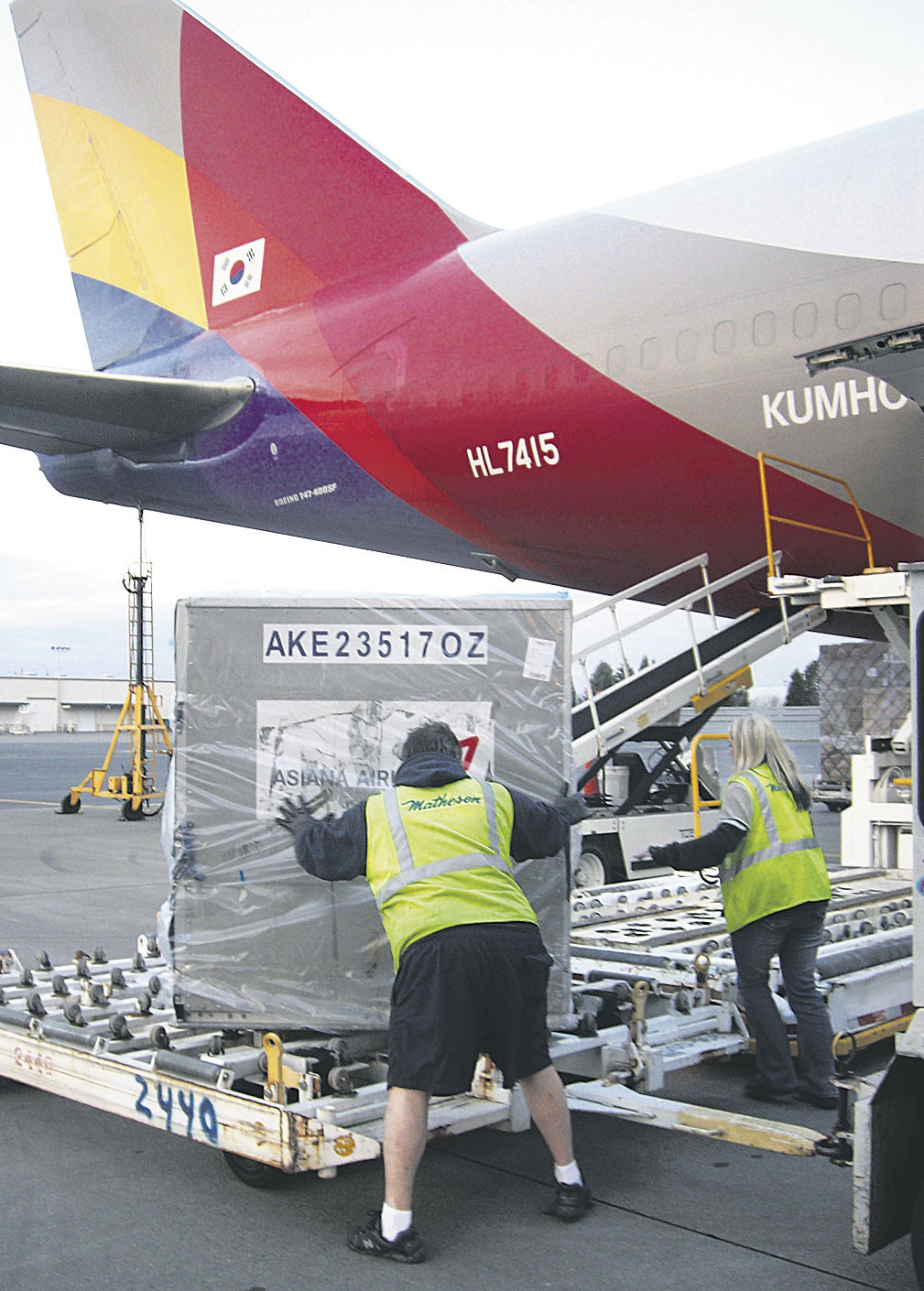 Mateusz Perkowski/Capital Press Workers in Portland prepare to load an Asiana Airlines cargo plane with export goods headed for the Pacific Rim. China, Japan and other countries in Asia are major buyers of U.S. agricultural goods.

A food broker called Duyck and asked if he'd be interested in selling his crop overseas.

The experiment was successful enough to prompt Duyck to research export documentation as a way to expedite future shipments.

In the long term, he's thinking about connecting with foreign buyers more directly.

"You can save them money and make a little more yourself," he said.

Scott McKenzie, a cranberry farmer from Sixes, Ore., has a similar story.

Three years ago, McKenzie was contacted by a food trader who bought some of his individually quick frozen cranberries and then sold them in Asia.

The crop has fetched better prices than it would domestically, which has convinced him to join with several other farmers to divert more of their production to Taiwan and other countries.

"I think it has the potential to be a stronger relationship," he said.

Duyck and McKenzie are not isolated cases. Producers of fruits, grains, oilseeds, meats, logs, seafood and other products have all benefited from growing foreign demand.

The value of U.S. agricultural exports has more than doubled in the past decade, from about $62 billion in 2001 to $149 billion in 2011, according to federal trade data.

A producer's role in exporting goods can vary widely, depending on how deeply engaged the company wants to be.

For companies that want to limit their involvement, there are several indirect approaches to exports, said Allan Christian, senior international trade specialist at the U.S. Department of Commerce.

In some cases, producers can "piggyback" by selling their goods to other companies that already export similar products, he said. International trading companies buy goods directly from producers, while export management firms are paid a fee and commission for navigating the export process.

Some companies start with an indirect approach and become more aggressive as they expand sales.

During the early 1990s, the Oregon Fruit Products Co. dipped its toe into the export market by hiring a broker to sell its canned fruit to countries along the Pacific Rim.

The company shifted into a more active role in the mid-2000s and now has employees who regularly travel back and forth to Asia, working directly with overseas distributors.

Today, roughly a third of the company's products are sold to bakeries, restaurants and retail outlets in 13 countries.

Trade missions and trade shows can provide exposure to buyers, but it's critical for producers to conduct due diligence on potential partners, Christian said.

Asking questions will usually reveal a lot about a partner's credibility, he said. Those who are willing to share information about their distribution network and marketing are more likely to be qualified.

"If they have something to hide, that should be your first point of concern," said Christian.

Companies should verify a distributor or importer's experience with references and get background information about its operations, he said.

For example, some distributors are owned by companies that produce competing products. In such cases, they might sign on with a U.S. producer to limit that company's distribution reach, Christian said.

"It's a strategy in many cases," he said.

Calls from interested buyers are a common introduction to the export business, but companies should take the time to figure out which markets are viable for them, Christian said.

Prospective exporters should delve into a country's demographic profile to anticipate consumer demand for their product, he said. Information about its systems of transportation, energy and distribution is also key.

Sales of agricultural machinery to Japan, for example, have been stymied by the country's narrow roads, which impede movement, he said.

"Don't assume you know what the infrastructure is like in that country," Christian said.

Such research should encompass the legal and regulatory hurdles that a product may have to clear as well as the potential for political volatility within the country, he said.

The Chinese government can supersede business transactions by prohibiting importers from paying in dollars, thereby throwing many producers for a loop, he said.

Aside from tariffs, countries may require changes to labeling and other modifications that add to product cost, he said. Countries in Europe, for instance, often mandate that products and containers be recyclable.

"This is all building up to what your export price is going to be," Shannon said. "Based on that price, can my consumer afford to buy it?"

Product approval and certification is responsible for "most of my nightmares," Christian said.

These procedures are confusing in some countries, he said.

Even where the standards are transparent, the approval process can be much more stringent than U.S. companies are used to, Christian said. In Australia, for example, nutritional supplements are regulated like pharmaceuticals.

Theft of intellectual property is a significant risk in some foreign countries, as is the possibility of domestic producers imitating ideas and muscling in on market share, he said.

"Do you want to do business in a country that's known for knocking off products and stealing patents?" he said.

Companies that are most successful in the export business fully recognize these problems and develop plans, Shannon said. "They know exactly where they're going."