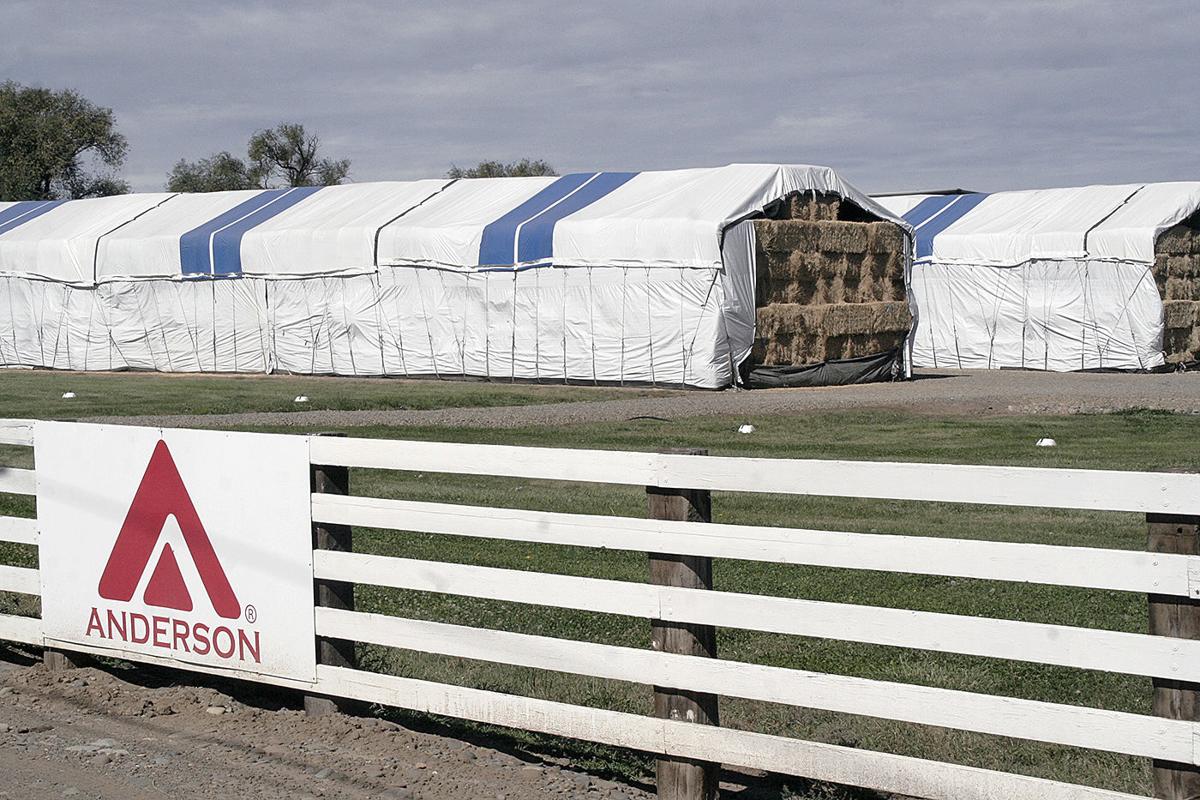 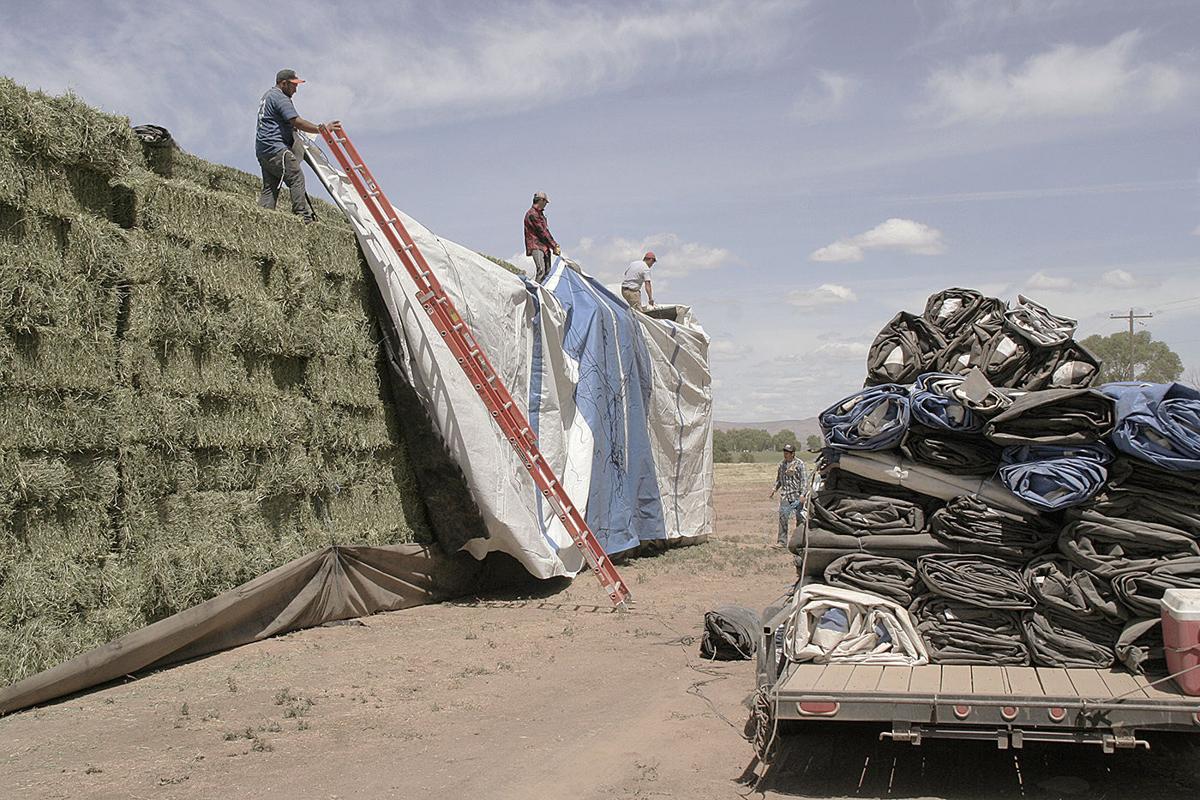 A Tarp-it crew from Ellensburg, Wash., spreads a side tarp on an alfalfa stack near Ephrata. 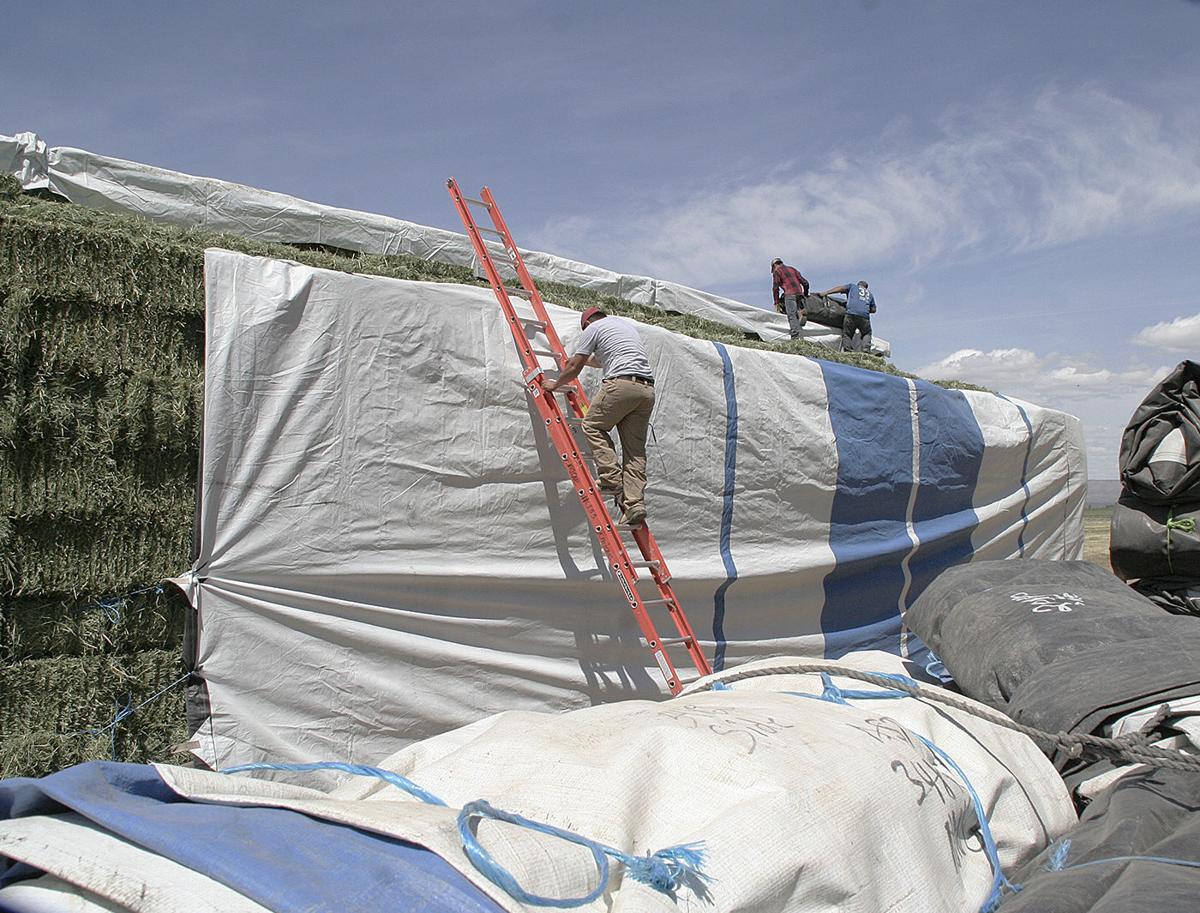 A Tarp-it crew begins securing the top tarp on an alfalfa stack near Ephrata, Wash. 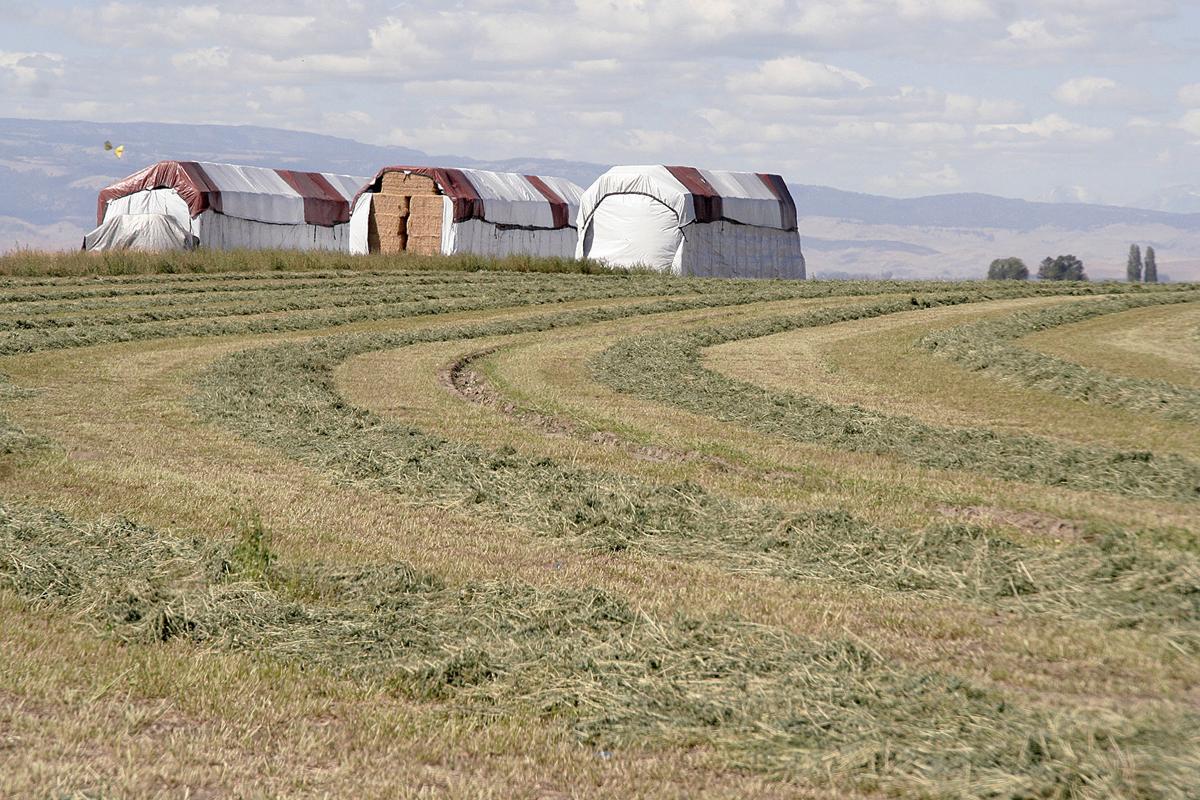 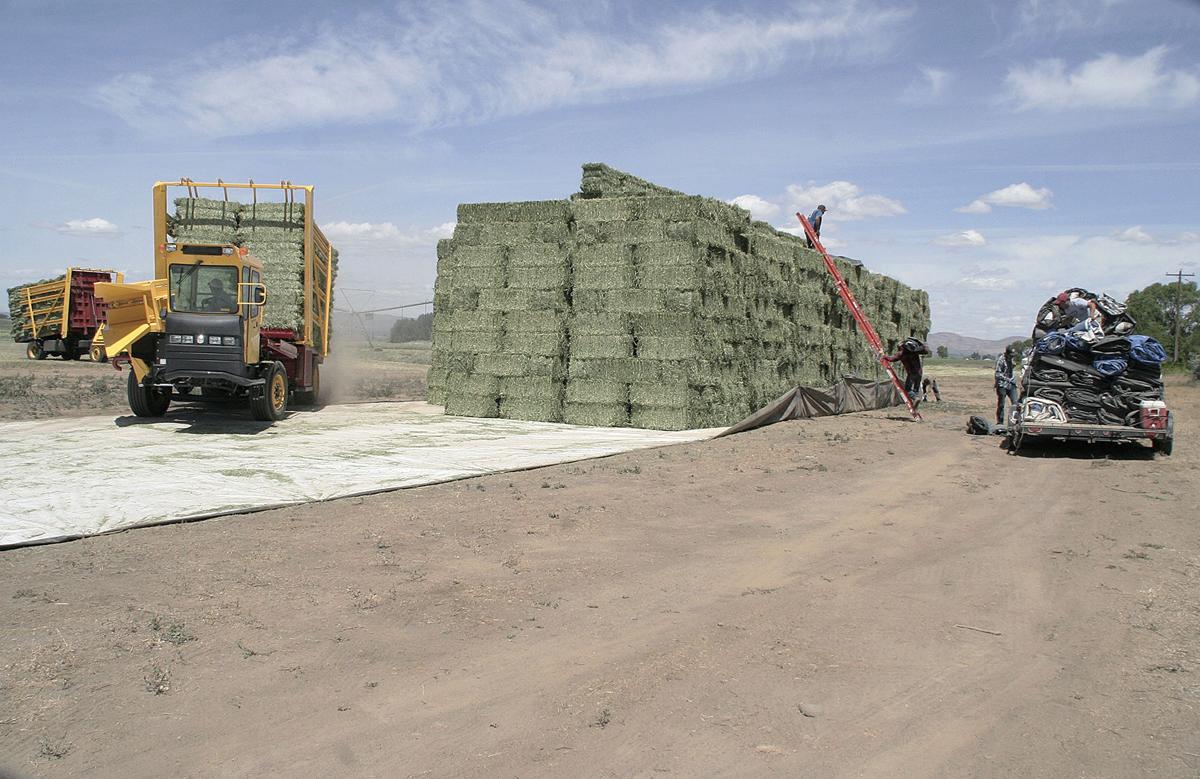 Harrow beds of fresh alfalfa arrive at a stack near Ephrata, Wash., where a Tarp-it crew begins to cover it with tarps. 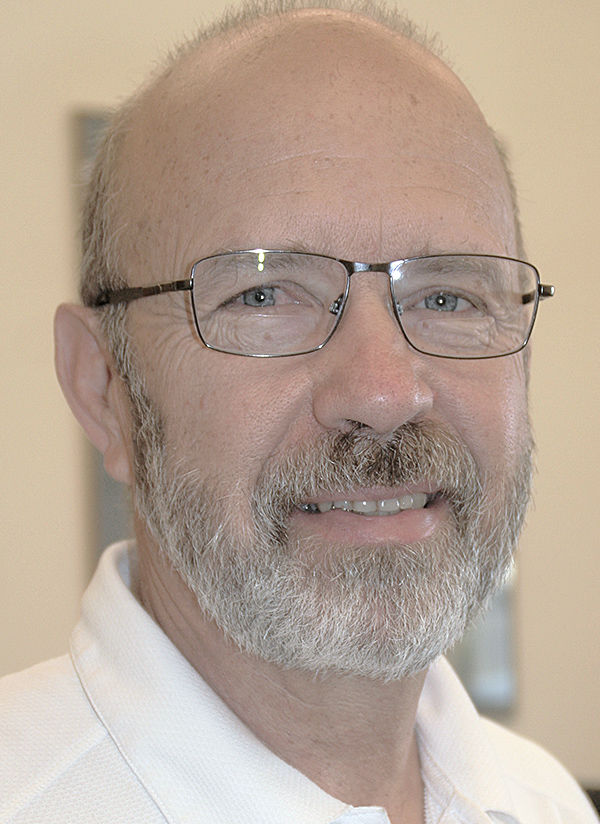 A Tarp-it crew from Ellensburg, Wash., spreads a side tarp on an alfalfa stack near Ephrata.

A Tarp-it crew begins securing the top tarp on an alfalfa stack near Ephrata, Wash.

Harrow beds of fresh alfalfa arrive at a stack near Ephrata, Wash., where a Tarp-it crew begins to cover it with tarps.

MOSES LAKE, Wash. — In the summer of 1977, Glen Knopp was covering his hay stacks with a sacrificial layer of baled straw to protect them against rain damage. His cousin, visiting from Canada, said there was a better way.

New polyethylene tarps seemed to be working well in Alberta, so Knopp, then just 22, bought five and used them on his hay stacks.

“I wanted to sell a premium product to dairy guys. Those thunder storms could come up and dump water and I could lose several layers of bales,” Knopp says.

No one was covering hay stacks in those days. Growers knew rain would reduce portions of their stacks from top grades to feeder or bedding quality. It didn’t matter much. It would be used somewhere. Dairies could grind it with other feeds. It just meant less money.

Exports to Asia and elsewhere were just getting started. Exporters didn’t want rain damage but also didn’t need a lot of hay. Heavy-duty vinyl tarps used in trucking were too expensive, heavy and cumbersome to be used on hay bales.

Knopp liked the lighter polyethylene tarps. He began using them on the ranch where he grew up southeast of Coulee City.

“No one was doing custom tarping in Washington, Oregon or anywhere I was aware of in the U.S., so I sold tarps and guys would buy them and try installing them on their own,” Knopp said.

Today, Knopp, 63, is founder, chairman of the board and past CEO of Inland Tarp & Liner (ITL) and Inland Tarp & Cover Services (ITC Services) in Moses Lake.

ITL and WesternAg Enterprises Inc. of Tolleson, Ariz., are the two largest manufacturers of hay tarps in the U.S.

ITC Services and Tarp-it Inc. in Ellensburg, Wash., are the two largest hay tarping services. Most of their business is in the West, where most export and dairy hay is grown.

Knopp and Tim Ravet, 48, the owner of Tarp-it, estimate the hay tarping industry, driven by the increase in U.S. hay exports, is now a $50 million-a-year business. But they say profit margins are narrow.

The business is competitive enough and margins are tight enough that few newcomers venture into it, Ravet said.

“You have to do a lot of volume for it to make sense,” he said.

Tarp-it buys its tarps from WesternAg. Beside WesternAg and ITL, the other main tarp manufacturer is J&M Industries in Ponchatoula, La.

Knopp sold tarps as a side business to his ranching through the 1980s but in 1991 went into it full-time, and his brother took the ranch.

Overseas hay buyers had become skittish about hay stored under tarps because growers couldn’t keep tarps on in high winds and hay ended up wet from rain and snow.

“I knew I could keep them on based on my own use. I offered to cover exporters’ hay and by fall, had a couple customers,” Knopp said. “As far as I know, we were the first custom hay tarping company.”

Wilbur Ellis in El Centro, Calif., was an early customer, as was Anderson Hay & Grain Co., in Ellensburg, Wash., now one of the largest U.S. hay exporters.

“I got a call from Richard Ravet (Tim’s father), a hay buyer for Anderson, saying they needed us to cover a bunch of first-cutting. So we covered a bunch of stacks for them. We got a big rain,” Knopp said.

“One of their reps told me that when Ron Anderson got the bill he asked his son, Mark, (now company president) what he was doing,” Knopp recalled. “Mark showed his dad how much they’d saved versus what they normally lost to rain and his dad said, ‘Carry on.’”

“I don’t recall the part about dad asking me about the bill, but I do know that the added cost was worth it to avoid removing damaged tops from stacks,” Mark Anderson says. “As quality requirements from markets increased, along with increasing cost of hay, it needed to be protected.”

While Anderson was quick to see a benefit in tarping, it took others more time. Idaho growers didn’t think they got enough rain damage to warrant covering hay.

“They would say, ’My dad never covered hay and I’m not going to.’ That’s changed totally today,” Knopp said.

In 1991, exporters paid $10 per ton extra for hay stored in barns but it wasn’t practical or cost effective for growers to build barns at every hay field, especially since plantings move in crop rotation.

The barn-stored export bonus went away as tarping improved and expanded, and Knopp regarded that as proof of tarping success.

Tim Ravet was 10 years old in 1981 when his parents moved from Kent, near Seattle, to Thorp, northwest of Ellensburg, and bought a hay ranch.

His father became a hay buyer for Anderson Hay & Grain Co. and Tim worked for the company in high school and college.

“Tarping was still in its infancy. The industry was growing faster than Inland could keep up with. My dad saw the need. I was in my last quarter of college (Central Washington University) and headed toward teaching and coaching,” Tim Ravet said. “Dad talked me into starting a company.”

“I remember tarping a stack with Glen Knopp when I was 14 at Mellergaard farm in Ellensburg. He and I were covering the stack. It’s ironic we became competitors,” Ravet said.

Knopp says he thought he could keep up with demand but that it turned out there was enough business for both companies.

Knopp and Ravet speak well of each other’s work but say they are competitors.

Their tarps are distinguishable by ITC Service’s being crimson and white and Tarp-it’s being blue and white.

“They do a great job of covering hay with good quality tarps and getting stacks covered quickly,” Knopp said of Tarp-it. “There have been some others start up in the last 20 years and didn’t do as good a job and hurt the industry.”

ITC Services and Tarp-it handle about 1,000 customers each, farmers and exporters. Both are in Washington, Oregon, Montana, Utah and Nevada. ITC Services is also in Wyoming and Tarp-it is in California, Arizona and New Mexico.

“We each have our own customers and there’s 20% of the market we fight over,” Ravet said. “You need them when the weather is nice and there’s not a lot to do. Other days when you have too much to do, you let the other guy have them.”

“We respect each other,” Knopp said. “It’s kind of like basketball. Tim’s son is big in basketball. For a time, he said there was only one winner, but I think there’s room for two winners. Ideal Tarp is slugging away, too. I don’t disrespect them.”

ITC Services and Tarp-it sell tarps but the vast majority of their customers pay to lease tarps and for the service of installation and maintenance.

Costs range from $6 to $15 per ton for the season depending on stacking patterns, hay density, whether it’s top cover only or also sides and bottoms. Distance to the stacks is another price factor.

The going rate for fully wrapped is $10 to $12 per ton, Ravet said, while just top cover can be as low as $3 per ton for feeder hay. “You can lease a barn for $10 a ton, so it needs to be competitive with that,” he said.

Both companies count on volume to be profitable.

Often growers order tarping and who ends up paying all or part of the bill is negotiated between the grower and buyer.

Tarps often last for two or three installations and then become worn from rubbing on stacks and are replaced. Old tarps sometimes are used for feeder hay. Ultraviolet light protection of the tarps lasts three to four years. Beside protection from rain and snow, tarps prevent sun bleaching of hay to maintain its nutrient value.

Knopp said stacks range from 8 to 50 feet wide and most are 16 to 20 feet tall. Length varies.

Crews of four to six men install the tarps. An experienced crew of four can install a 54-foot-long tarp, top and sides, in 20 minutes, Knopp said.

Both companies employ about 250 contract workers during peak season to cover stacks.

Men have fallen from stacks. Both companies train employees on how to move tarps and top bales which are often rearranged to form peaks and overhangs.

“We train our guys carefully and that if a wind catches a tarp to let go,” Knopp said.

Business is good and should stay that way as long as hay exports continue to do well, Ravet and Knopp say.

Exports to China have declined 40% since tariffs were first increased in July 2018 and may end Dec. 15 when they go to 42%, Anderson said.

In 2017, before tariff increases, China bought 1.2 million metric tons of U.S. hay, mostly for dairies. It was the No. 1 export market of U.S. alfalfa and was barely No. 2 to Japan for all U.S. hay.

“For me the key is having markets open. Tariffs slowing it down are not good for anybody,” Ravet said.

“If we price ourselves out of the market (with retaliatory tariffs) eventually there won’t be much need for export or tarping,” Knopp said.

The longshoremen work slowdown at West Coast ports in 2014 and 2015 initially was good in that more tarps were needed because more hay was sitting.

But having tarps on the same stacks for more than a year caused greater wear, Ravet said, so used tarps went to the dump. It also resulted in customers having a hard time paying their tarping bills, Knopp said, as hay sales and prices declined.

But the greatest challenge, Knopp said, is labor.

“It’s very difficult to find people who want to do hard physical labor for more than part-time work,” he said. “In terms of a career, anything that involves hard labor is not what American young people are looking for.”

Knopp hasn’t tried to use foreign guestworkers because the programs appear to be too complicated. He says it would be “immensely” helpful if the federal government improved those programs.

Weather is always a challenge, and having enough people on short notice to be “Johnny on the spot” to fix tarps is never easy, Ravet says.

“We cannot afford to have stacks rained on before being tarped. The provider needs to be properly staffed or service drops quickly,” Anderson said. “It’s a very important trade for our industry. We need our product protected in a way that assures quality year-round.”