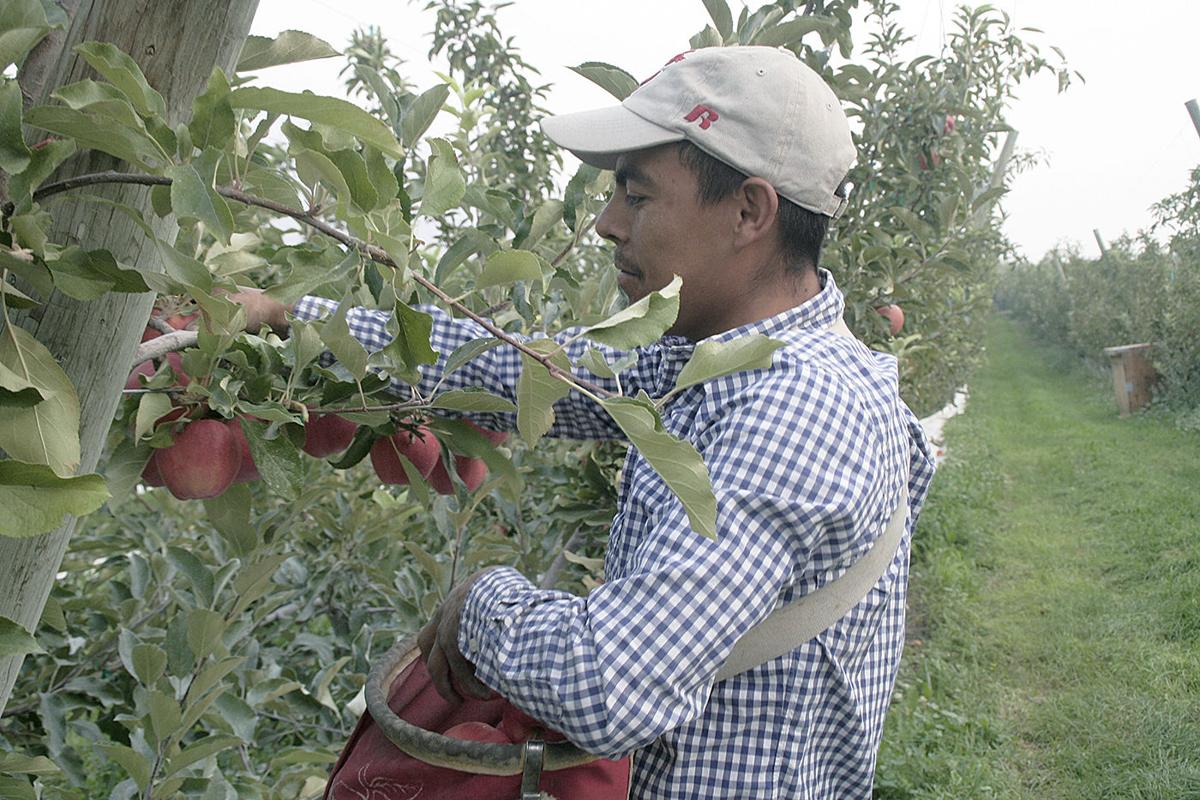 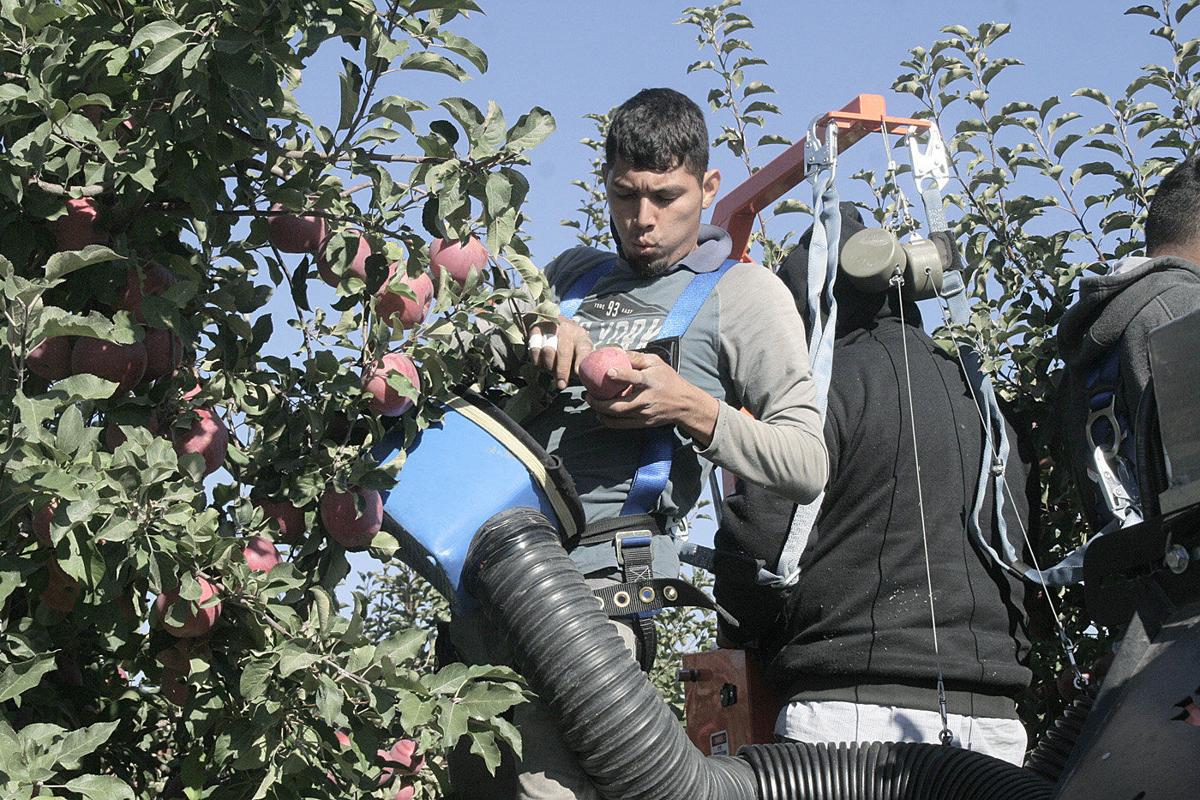 Roberto Hinojosa Fernandez, an H-2A picker, clips stems on Fuji apples at Valicoff Orchards near Wapato, Wash., in 2018. Reform of the guestworker visa program for agriculture is among the immigration issues facing Congress. 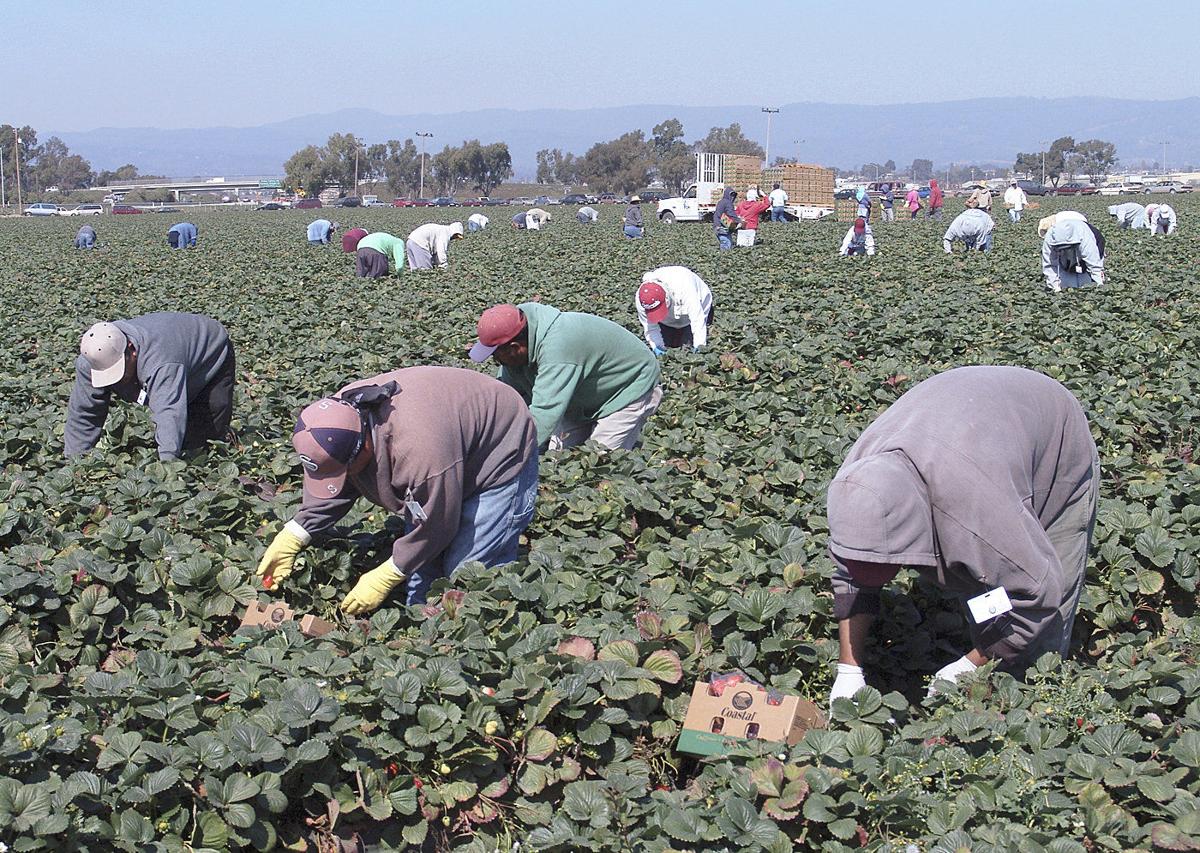 Pickers harvest strawberries near Santa Maria, Calif. Reform of the guestworker visa program for agriculture is among the immigration issues facing Congress. 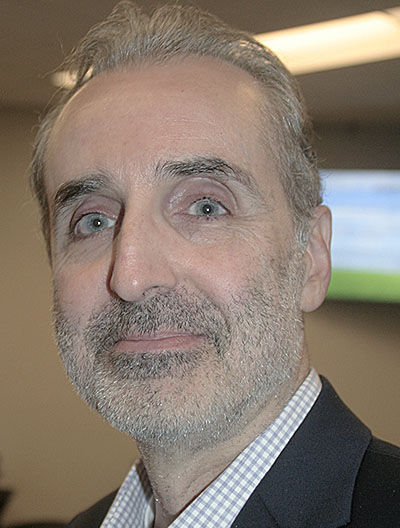 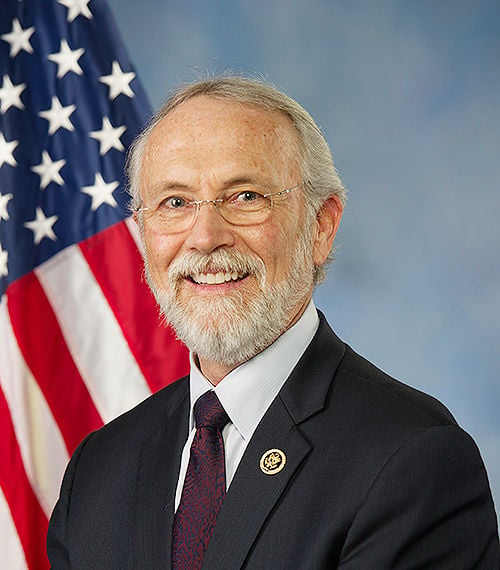 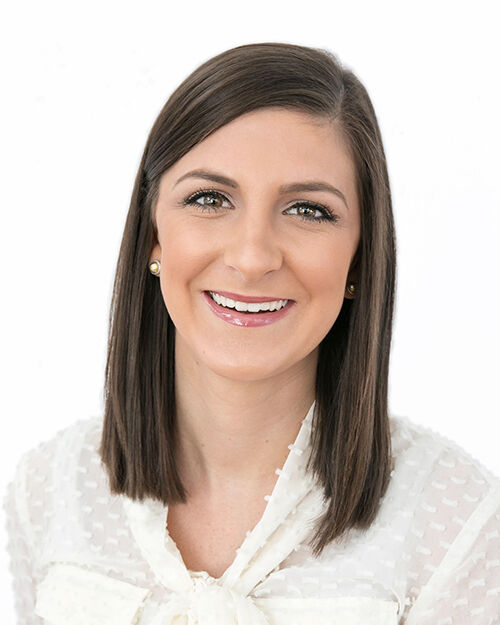 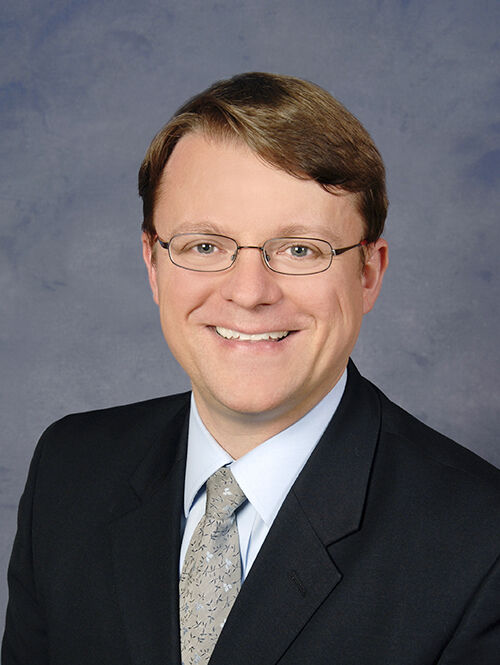 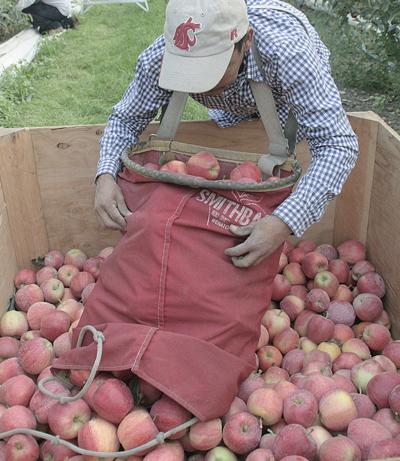 On his first day in office, President Joe Biden sent a clear message to Capitol Hill that his administration was ready to make immigration reform a top priority.

Biden offered a sweeping proposal, dubbed the U.S. Citizenship Act, that seeks to fast-track legal status for 11 million undocumented immigrants — including farmworkers who make up the backbone of American agriculture.

The new Democrat-led Congress is now working to develop that legislation, with Sen. Bob Menendez, D-N.J., and Rep. Linda Sanchez, D-Calif., leading the effort. It remains unclear whether lawmakers will push for comprehensive reform, or break up the Biden plan into a series of smaller bills.

Either way, farm advocates say more is needed to solve labor shortages that have dogged the industry for decades.

Leon Sequeira, an attorney based in Washington, D.C., and former assistant secretary of labor under President George W. Bush, said the Biden plan has serious gaps. It makes no reference to fixing the country’s guestworker program, which is growing in both usage and cost for farms.

“There is virtually nothing (here) that is going to solve the agricultural labor issue that we face,” Sequeira said. “That is one area where Congress is going to have to fill in the details.”

According to the American Farm Bureau Federation, agriculture needs 1.5 million to 2 million hired workers every year to pick, process and package crops.

An estimated 50-70% of those farm laborers are undocumented, and few American citizens are willing to do the strenuous work.

“Agricultural work is hard. It’s done outside often, where it’s warm,” said Allison Crittenden, director of congressional relations for the Farm Bureau. “I think that one way we can quantify the proliferation of the domestic worker shortage is looking at growth in the H-2A program.”

The H-2A program provides temporary visas for foreign agricultural workers to come into the U.S. The number of positions certified by the Department of Labor has risen every year since 2012, reaching 213,394 visas last year.

Florida farmers hired the most H-2A workers in 2020, followed by their counterparts in Georgia, Washington state, California and North Carolina, all of which exceeded 20,000 workers.

Still, H-2A provides only a fraction of the workers agriculture needs. As domestic workers continue to get older, Crittenden said they often pivot out of farm work and into other sectors of the economy, further exacerbating the labor shortage.

One study cited by the Farm Bureau shows the agricultural labor shortage accounted for $3.3 billion in missed economic growth in 2012.

For that reason, Crittenden said any immigration reform must address both workers already in the country, as well as flaws in the H-2A program to ensure farms can rely on a steady and increasing supply of labor in the future.

“This is one of the top problems for our membership,” Crittenden said. “We want to make sure, if the train is leaving the station, that we have a solution for agriculture.”

The U.S. Citizenship Act, as its name suggests, focuses on one major aspect of the issue.

Biden wants to create a path to legality for undocumented migrants already living and working in the country. Under his proposal, undocumented immigrants could apply for temporary legal status with the chance to apply for a green card after five years if they pass criminal background checks and pay their taxes.

Immigrant farmworkers, as well as those with temporary protected status and Dreamers — those protected under the Deferred Action for Childhood Arrivals, or DACA Act — would be allowed to apply for green cards immediately, if they meet specific requirements.

After three years, all green card holders who pass additional background checks and demonstrate a knowledge of English and U.S. civics can then apply to become citizens.

Legalizing the current workforce is critical to the survival of farms, said Dennis Nuxoll, vice president of government affairs for Western Growers.

“For us, making sure they are right with the law, that they come out of the shadows, is incredibly important for our industry,” Nuxoll said.

Western Growers members produce roughly half of all U.S. fruits and vegetables and two-thirds of all tree nuts grown in Arizona, California, Colorado and New Mexico.

Without a path to citizenship for current workers, Nuxoll said the industry could not make up the labor shortage through guestworkers alone.

First, he said the H-2A visa program is not built to handle the volume that would be required. Certain industries that require year-round labor, such as dairy, also do not have access to H-2A.

At the same time, Nuxoll said farms would be losing longtime workers with years of institutional knowledge about the operations that can’t be quickly absorbed by new crews.

“For our farmers, the existing workers they have, many of whom who have been with them for decades, are the backbone of American agriculture, at least with regards to produce,” Nuxoll said. “That’s the reason, frankly, you’re able to go to Safeway or Albertsons and enjoy fruits, vegetables and tree nuts.”

That being said, Nuxoll said the H-2A program is in need of reform.

“You have to do both,” he said of immigration and guestworker reform. “They go hand-in-hand.”

That is what critics say is missing from the Biden plan. A summary of the U.S. Citizenship Act on the White House website makes no reference to H-2A or guestworker reform, while the program continues to suffer from rising costs and complicated bureaucracy.

The minimum wage for H-2A workers is calculated annually using a survey collected by the USDA. From that, the Labor Department issues what is known as the Adverse Effect Wage Rate, or AEWR, which is intended to keep wages for foreign workers high enough that they don’t adversely affect the employment of domestic workers by displacing them.

Any domestic workers working alongside H-2A workers also get that higher pay.

Last year, the Trump administration approved a two-year freeze of the AEWR, only to have it overturned by a federal judge in California. The 2021 AEWR for the Northwest, published on Feb. 11, is $16.34 per hour for field and livestock workers — a 3% increase from 2020. The AEWR in California is at $16.05 per hour.

Meanwhile, labor costs in Mexico are $7 per day to produce the same crops, Sequeira said. And that’s not taking into account the American farmer’s obligation to provide free housing and transportation under the H-2A program.

“You tell me how you can come anywhere close to profitability when your products are sitting side-by-side on the grocery shelf,” Sequeira said.

Cost is not the only problem. Bringing in guestworkers requires navigating several agencies, which can sometimes take months and cause delays in harvest.

A survey conducted by the Farm Bureau found that 72% of growers reported that H-2A workers arrived, on average, 22 days after their “date of need.”

Dan Fazio, executive director of Wafla, formerly the Washington Farm Labor Association based in Olympia, said the H-2A program is overly complex for growers, and has been since it was created in 1986.

But simply legalizing undocumented workers is not in anybody’s best interest either, Fazio said. He pointed to caravans of immigrants arriving at the U.S.-Mexico border, and declining economic conditions in Mexico as the country goes into a recession.

“That’s what you see from the Biden administration. Their statements are all about a path to legalization,” Fazio said. “You have this undocumented workforce coming here, and it’s not in anybody’s best interest to come here undocumented. Our best interest as a country is to have a simple guestworker program.”

Fazio said the issue boils down to fairness. H-2A employers go through stringent regulations to hire seasonal workers, paying upward of $25,000 per bed to build and provide housing, along with inflated wages, while farms with undocumented workers sidestep those responsibilities.

That has created tension within the industry, and led to fighting among friends as farmers seek reforms, Fazio said. The challenge, he said, will be uniting to push for common interests in the next round of legislation.

Nuxoll, with Western Growers, agreed that unity is key.

“We have been working on this particular issue for the better part of 20 years,” he said, “trying to create a system that gets our existing workers right with the law who are here today, and creates an improved guestworker program.”

Crittenden, with the Farm Bureau, said the Biden plan is only a framework now, but it “demonstrates enthusiasm” for solving the issue.

“I think Congress recognizes that, if what they want is expediency and to show progress on immigration overall, perhaps we have to break these individual issues down,” she said. “I think if it’s broken up into pieces, you will see those individual pieces move faster.”

For example, the Farm Workforce Modernization Act did pass the Democrat-controlled House with bipartisan support last year before stalling in the Republican-led Senate.

While Democrats now control both chambers of Congress by thin margins, Crittenden said any bill will still need substantial Republican support to reach 60 votes needed in the Senate to avoid a filibuster.

Rep. Dan Newhouse, R-Wash., was a chief sponsor of the Farm Workforce Modernization Act, along with Zoe Lofgren, D-Calif. That bill would have let farmworkers apply for legal status as a “Certified Agricultural Worker” if they had done 180 days of agricultural work over the last two years.

Workers would then be able renew that status every five years if they claim at least 100 days of agricultural work per year. The bill also proposed streamlining H-2A and capping wage rate increases at 4.25% over 10 years.

Though it did not pass in the Senate, Newhouse said the bill garnered support from more than 300 farm groups. He is bullish on reintroducing the bill before an April 1 deadline to avoid another round of lengthy committee hearings.

Newhouse said the Biden proposal, as is, likely stands no chance of passing as comprehensive reform among Republican lawmakers and even some moderate Democrats.

“It’s actually very concerning to me, some of the things that are being talked about,” Newhouse said. “I don’t think it benefits our national security at all. We need to know who is coming into our country, why, and how long they will be staying.”

Newhouse said there is still an appetite in Congress to solve the agricultural labor issue.

“The need in the industry is certainly as great, if not greater, now than it was two years ago,” he said. “We’re strategizing, meeting regularly and talking about how we move forward.”