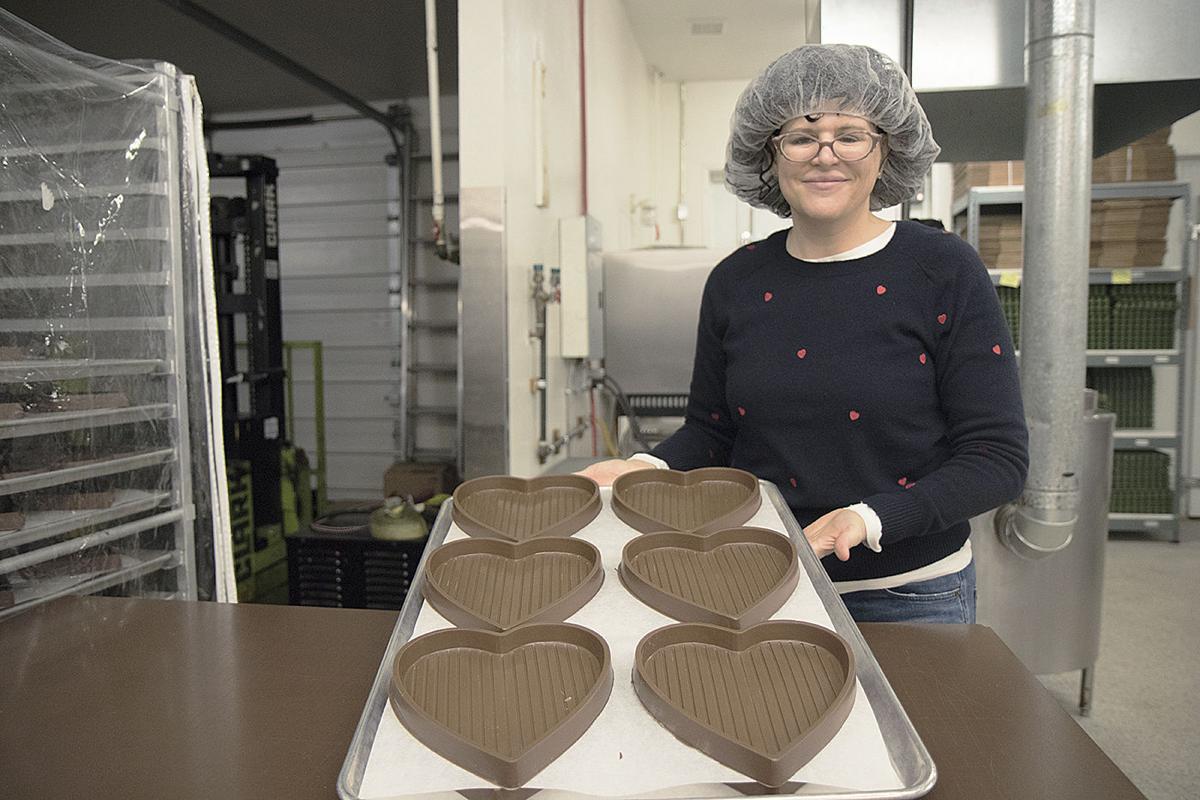 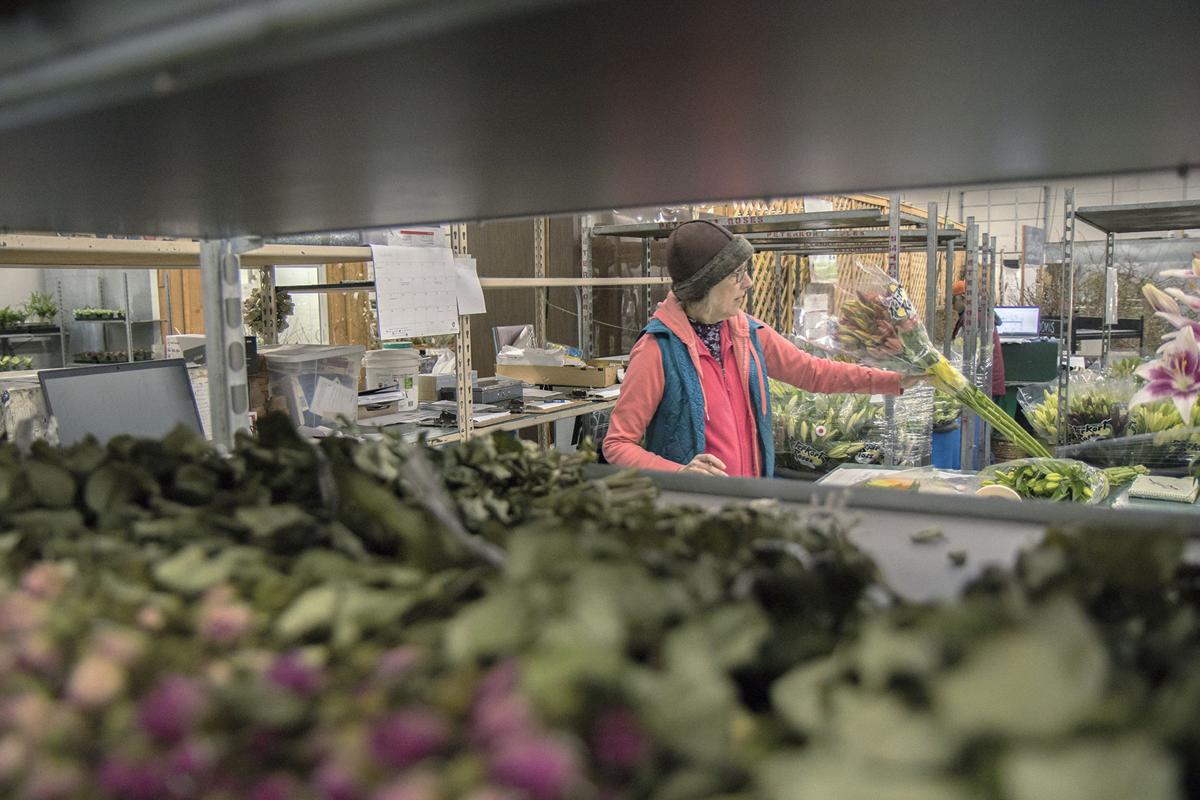 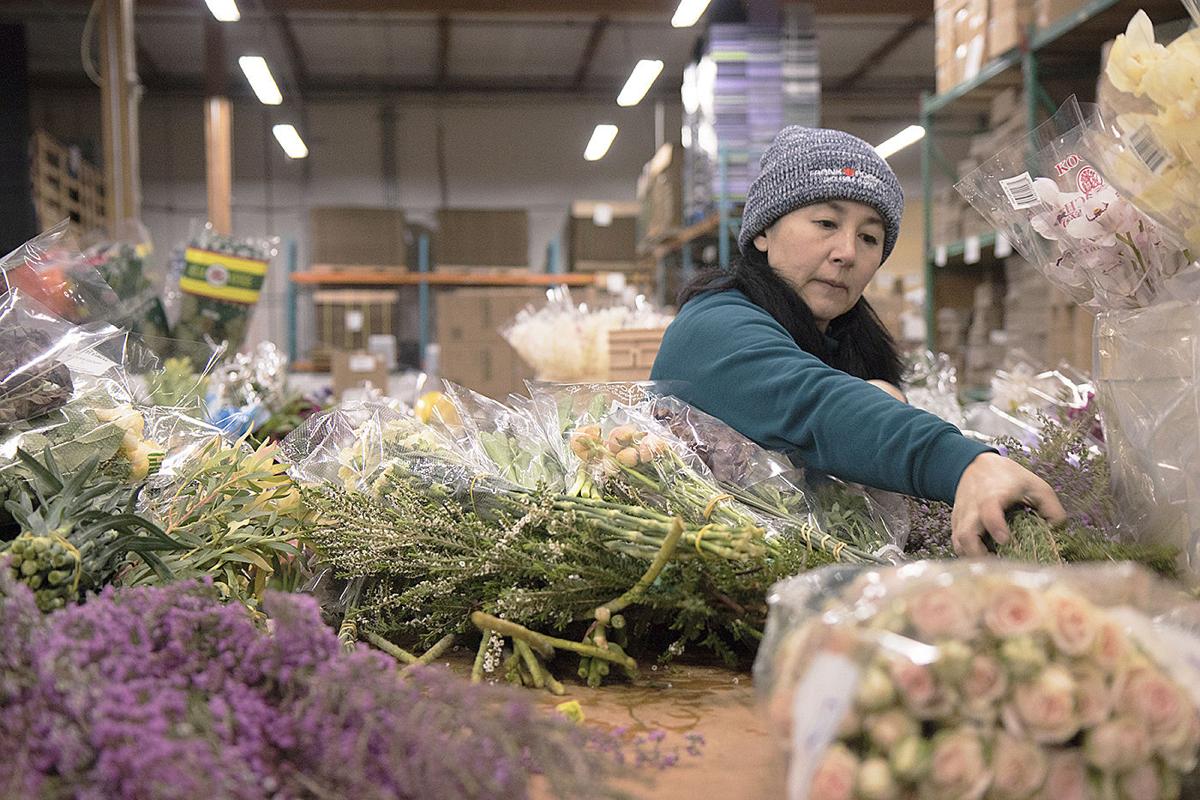 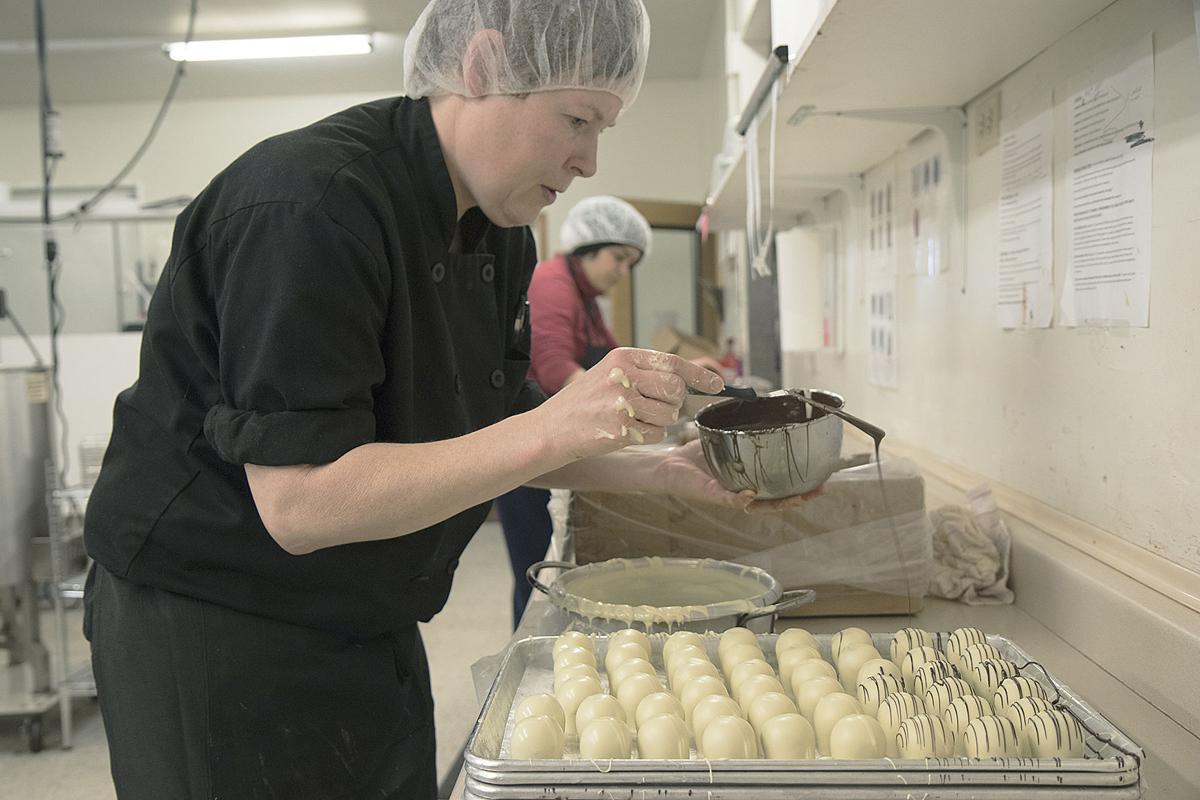 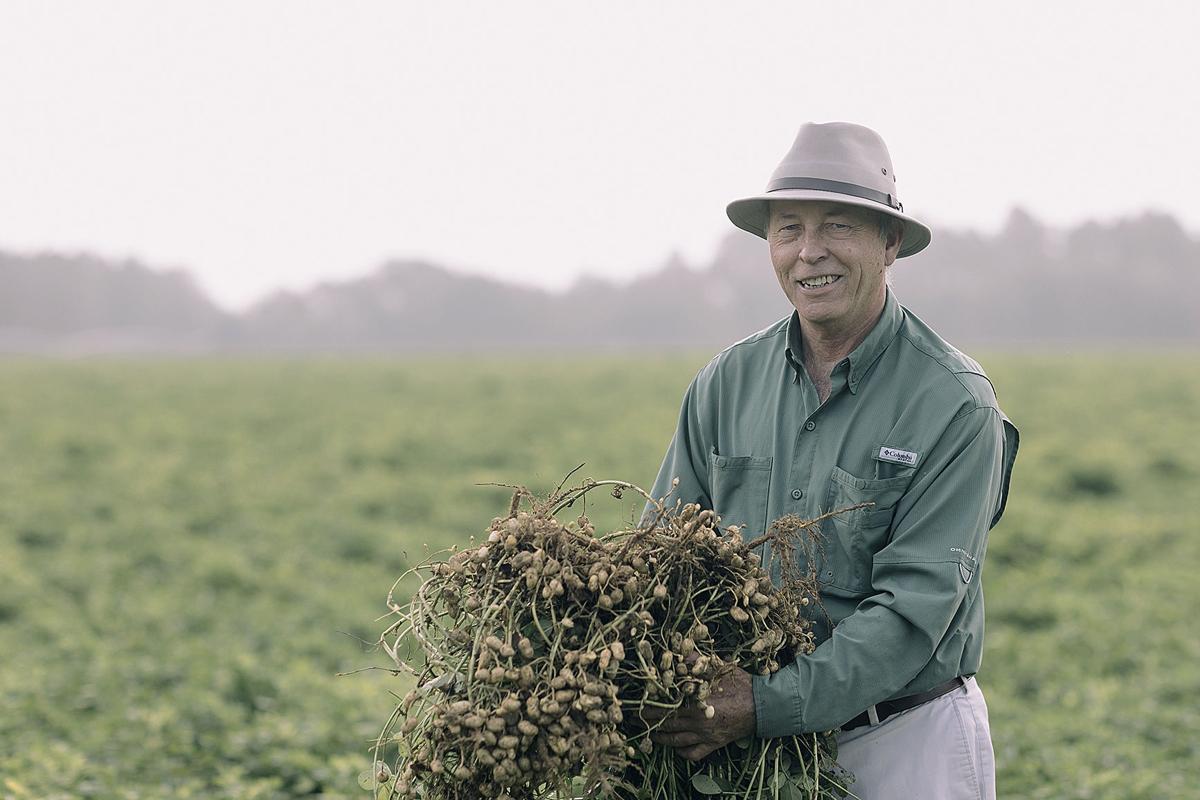 A peanut farmer with a peanut plant in Camilla, Ga. 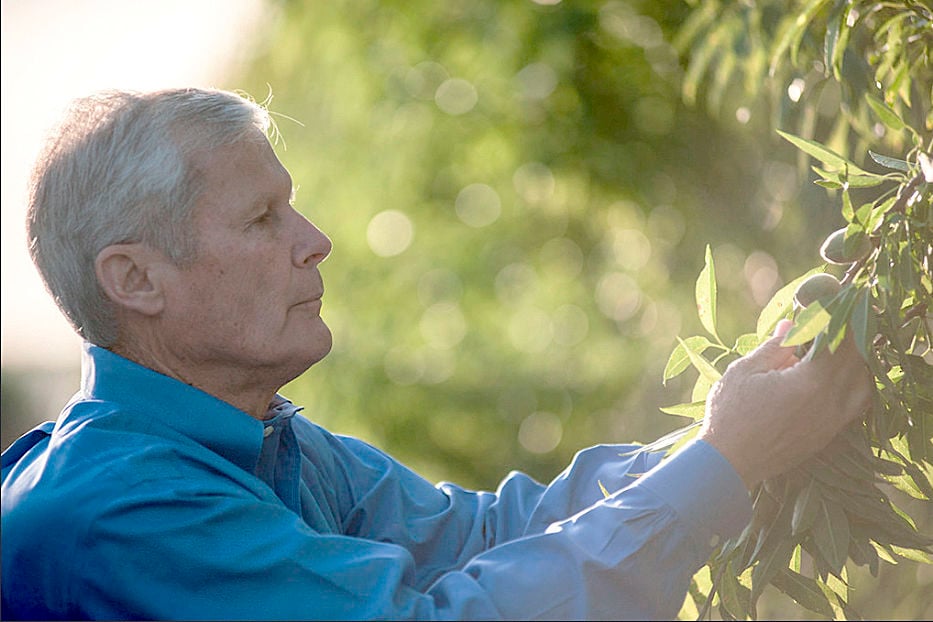 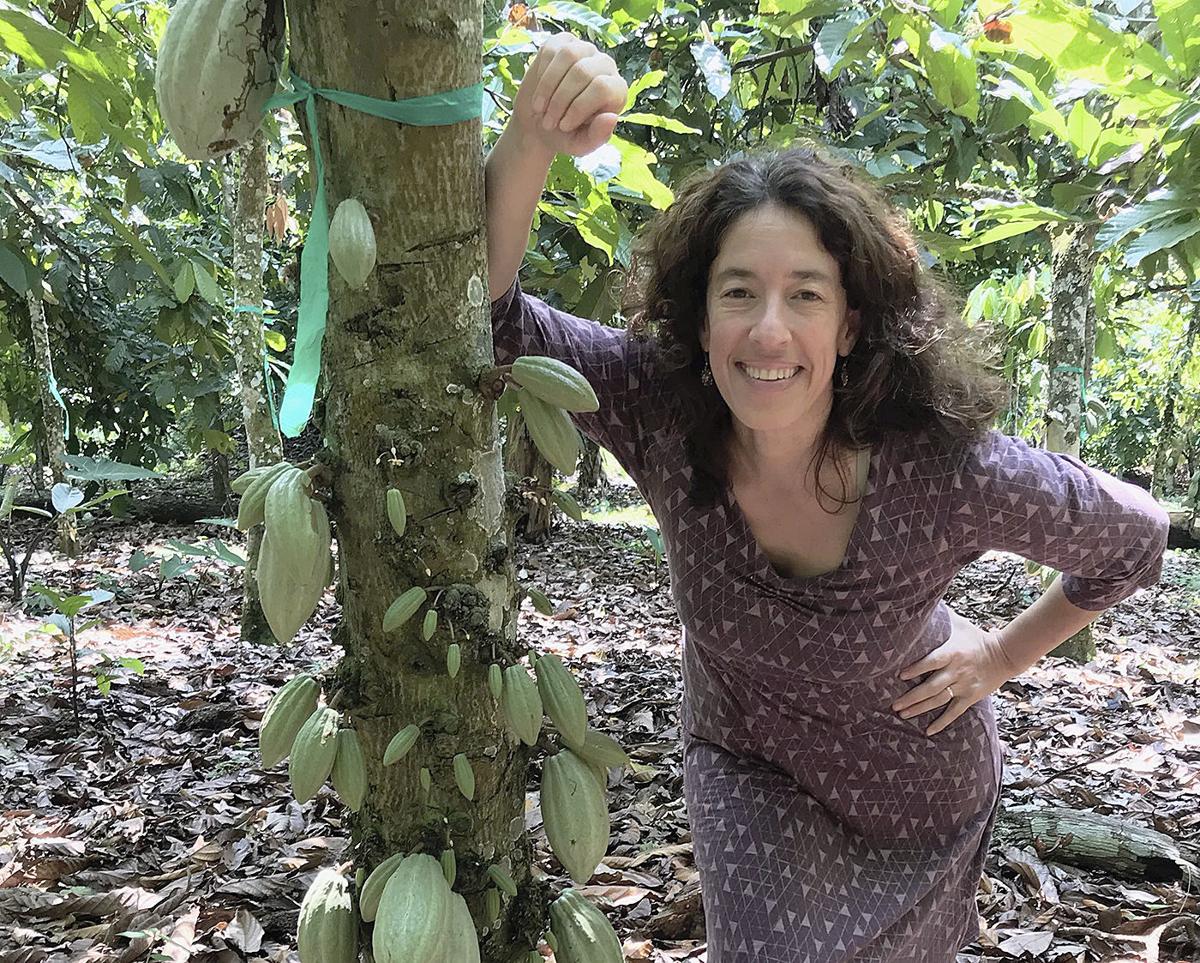 Kristy Leissle, who follows the cocoa and chocolate industries, leans against a tree with cocoa pods. 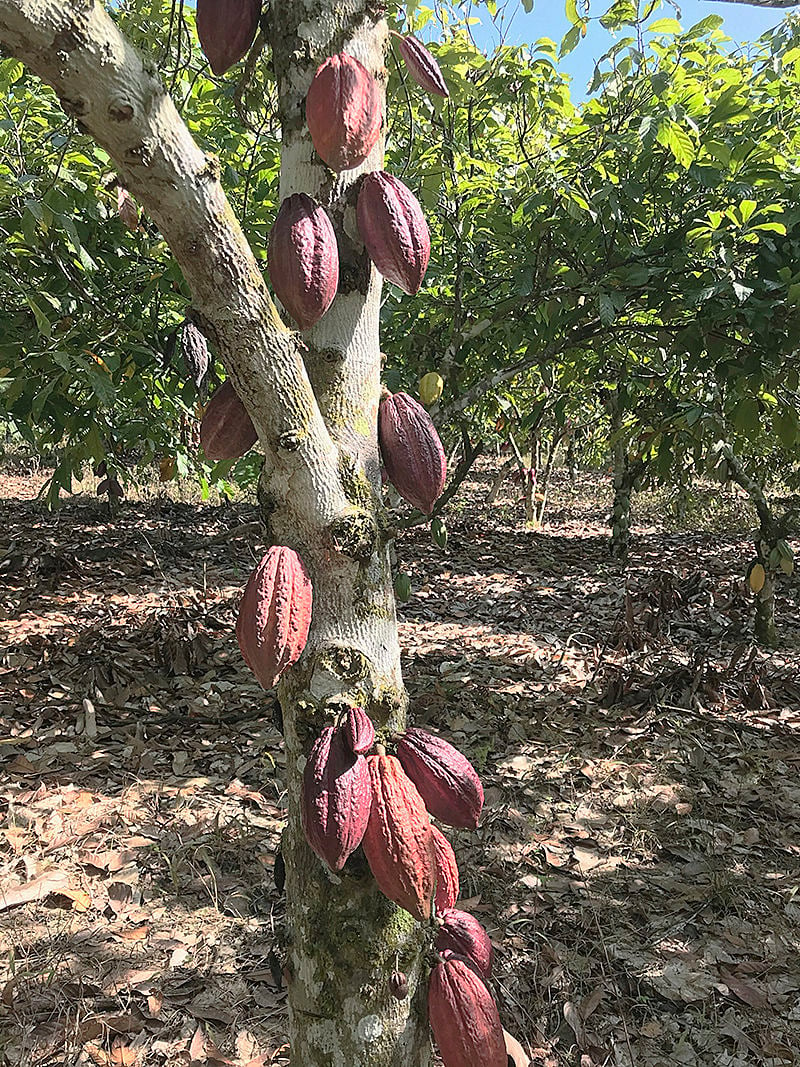 A tree with ripe cocoa pods in the Ivory Coast. 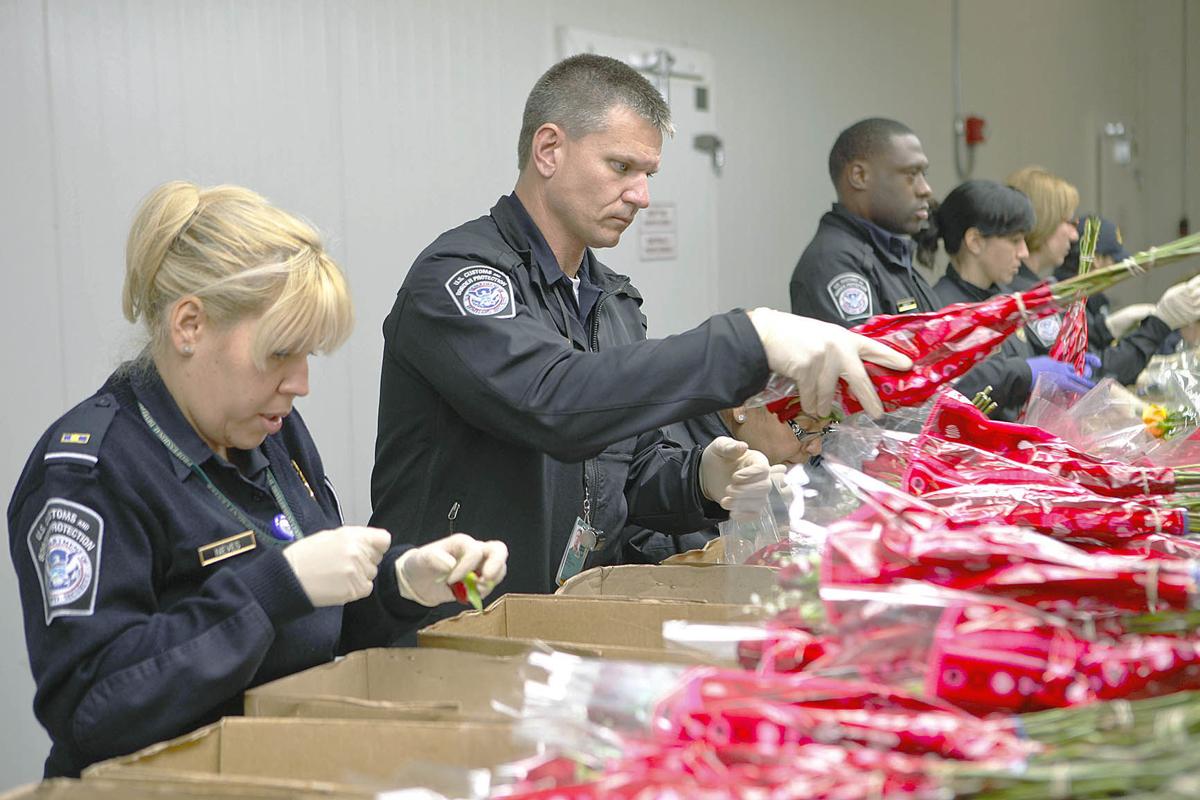 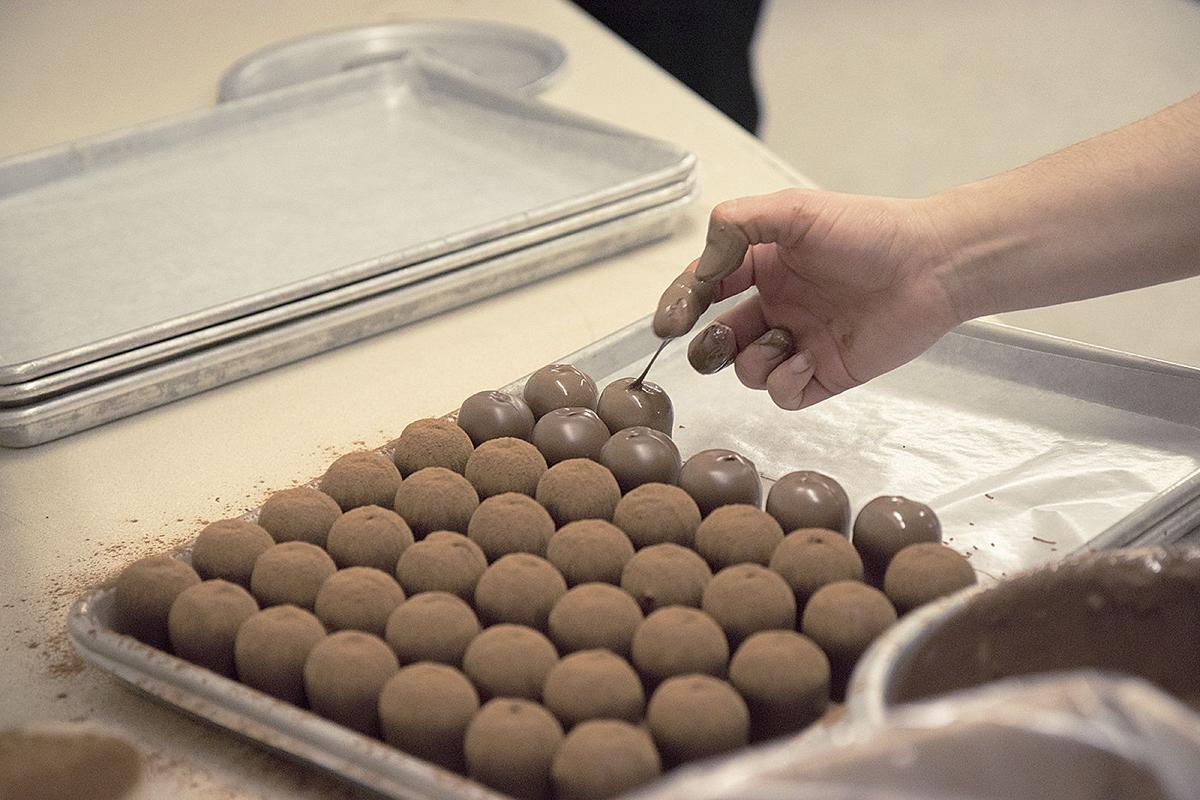 A peanut farmer with a peanut plant in Camilla, Ga.

Kristy Leissle, who follows the cocoa and chocolate industries, leans against a tree with cocoa pods.

A tree with ripe cocoa pods in the Ivory Coast.

EUGENE, Ore.—It was two weeks before Valentine’s Day, and workers were dipping and dusting truffles at the Euphoria Chocolate Company in Eugene, Ore.

It was like a scene from “The Nutcracker”: Chocolate ganache twirled in vats. Smells of cinnamon, cocoa and vanilla danced in the room. Tchaikovsky’s “Waltz of the Flowers” was playing.

But behind the flurry of treats and blooms, there are human stories: of drug cartels, hail storms, border agents and beet seed breeders.

These local flavors mingle with domestic and international ingredients: peanuts dug from soil in the American South, almonds from California trees, cocoa from West Africa.

Each represents an industry.

In the mooood for love

In 2018, according to a dairy economist, about 3.1 billion pounds of milk went into making confections, enough to fill 562 Olympic-sized swimming pools.

“Candy, confections and baked goods for holiday celebrations like Valentine’s Day,” said Matt Herrick, senior vice president of the International Dairy Foods Association, are “part of the fabric of America.”

When Milton Hershey invented the Hershey’s Milk Chocolate Bar in 1900, he built his operation in the heart of Pennsylvania dairy country.

“Folks in the artisanal cheese industry have been predicting 2020 might be a record year for sales,” said LaBelle.

Oregon’s Willamette Valley produces 99% of the nation’s hazelnuts, many of which go into candy and other treats, according to Oregon State University. Even bigger are the peanut and almond industries.

“Peanuts and chocolate are a match made in heaven,” said Lauren Williams, spokesperson for the National Peanut Board.

Snickers, Reese’s Peanut Butter Cups and M&Ms are the most popular peanut candies, said Williams. Every day, 99 tons of peanuts go into 15 million Snickers bars. The bar was named after its founding family’s favorite horse.

“I was raised on a farm,” drawled Andy Bell, a Georgia peanut farmer. “We’ve always grown peanuts. I plant a seed, watch it sprout, irrigate; I love the process.”

Almonds also earn their time in the limelight Feb. 14.

In 1976, Don Cameron, a biology graduate with no farming background, applied for his dream job at a wildlife refuge. He didn’t get an interview.

One of Cameron’s major crops is almonds, hard-shelled stone fruits related to plums; the ranch produced 2.7 million pounds in 2019.

“The demand for almonds has been phenomenal,” said Cameron.

California’s 1.24 million acres of almond trees churn out 80% of the world’s almonds.

“It’s cool how global this is,” said Rigg. “Every country has a different relationship with almonds. They’re popular in every country’s holiday season, and Valentine’s is huge. To think we supply it here in California is remarkable.”

The almond industry is braided with another strand of agriculture—honeybees.

On Feb. 5, John Jacob, a beekeeper at Old Sol Apiaries, was on the road toting crates of bees from Rogue River, Ore., to California almond country.

“I love working the seasons,” said Jacob. “It’s appealing to my biology background and my nature-loving side. I get to call the outdoors my office, and the scene changes every three months.”

In February, pollination season for almond orchards, more than 50% of U.S. beehives are transported to California. Without bees, Jacob said, trees produce 90% less almonds, so producers are willing to pay beekeepers $200 per hive for pollination.

And honey itself is a Valentine’s Day treat.

High fructose corn syrup, made from milled corn, is a major sweetener. As consumers have become more health-conscious, USDA data show the industry has shrunk 40% since the 2000s.

But the same data show refined sugar deliveries have increased 5%. Ranking sixth in global production—after sugar behemoths like Brazil, India and China—the U.S. makes about 9 million tons of “white gold” annually, according to the USDA, or 55 pounds per American.

Sugar doesn’t just come from cane fields in the South. According to the USDA, the sugar beet, a root vegetable related to chard, produces 55% of the domestic supply.

Most sugar beets are grown in Idaho, North Dakota and Minnesota, but Oregon State University says the Willamette Valley is the nation’s only significant production source of sugar beet seed.

Other consumers, according to Oregon State, prefer cane sugar, citing their concern that most sugar beets are genetically modified organisms, or GMOs, that allow farmers to control weeds using less labor.

“Chocolate-covered berries, strawberry shortcake, just stem strawberries like candy on a stick. Valentine’s Day is a hugely important day for us,” said third-generation farmer A.G. Kawamura, founding member of Gem-Pack Berries and former secretary of the California Department of Food and Agriculture. His farms are in California and Mexico.

For the holiday, Kawamura estimates, he sells hundreds of thousands of trays, each containing 4 to 8 pounds of strawberries.

During Valentine’s Day 2017, according to the Nielsen Company, a market research firm, fresh strawberry sales generated more than $52 million.

“The weather sometimes doesn’t cooperate, and it’s not a hardy fruit,” said Kawamura. “Sometimes one hail storm makes me lose everything I could’ve harvested for 20-something days. Farming is not easy.”

“There’s always an uptake in wine sales during the holidays,” said Gladys Horiuchi, spokesperson for the Wine Institute.

Valentine’s Day is a top-selling moment for U.S. winemakers, according to the Nielsen Company, a market research firm. Feb. 14 is the sixth biggest individual sale day for wine in the year. In 2017, the industry generated $630 million during the holiday.

According to the online reservation site OpenTable, more than 30% of consumers celebrate Feb. 14 by dining out with loved ones, increasing sales of food and wine.

Landing on a chocolate bar

“I have loved chocolate for as long as I have memory as a human being,” said Kristy Leissle, a Ph.D. who follows the cocoa and chocolate industries. “I reached a point when I realized it was bizarre that I knew almost nothing about this food. It sparked my curiosity; I wanted to understand where it comes from.”

It was evening in Ghana, Leissle’s home, in one of the world’s largest cocoa-producing regions.

Most consumers eat chocolate without thinking about the farmers behind it, said Leissle.

“It’s an industrial product. Those beans pass through many, many machines,” she said. “There’s nothing about a chocolate bar that suggests farming. I think the fact that cocoa grows on a tree as a fruit is often a revelation to people.”

Some cocoa farmers are wealthy, but the majority, Leissle said, “struggle to live on tiny margins.” Many West African farms, said Leissle, often have no running water, no electricity, no paved roads.

Cocoa has a dubious labor history.

According to the Bureau of International Labor Affairs, in Ghana and Côte d’Ivoire, 2 million children do hazardous cocoa work. The worst forms involve slavery, trafficking and debt bondage.

In fact, she said, cocoa earnings have made school, even college or trade school, possible for many who otherwise could not afford it.

Leissle said cocoa has advanced growers’ profits and the economy.

“Farmers are not fools,” said Leissle. “They think, ‘There’s huge demand, so I’m going to plant this crop.’ And it’s improved many of their lives.”

A rose from any other place

At 5 a.m. the week of Valentine’s Day, workers at the Portland Flower Market, an Oregon wholesaler, were unloading shipments. The room flowed with rivers of color.

February is peak season for the flower industry.

At the market, Scott Isensee, a manager at Frank Adams Wholesale Florist, said during Valentine’s week he sells 3 million flowers.

Isensee mainly works with local growers, but most roses come from South America.

“We wish we could have Valentine’s Day in July,” said Isensee.

Americans give each other about 200 million roses every Valentine’s Day. Most grow in the savanna outside Bogota, Colombia, a plateau fanning out from the Andean foothills.

Here, roses are summoned from the soil by a great hot sun hugging the Equator.

Harvested flowers are chilled to sleep in an attempt to outwit death, then shipped in cargo jets—10,000 boxes per plane, say airport officials—to be sold in the U.S.

The story begins in 1967, when an American horticulture student, David Cheever, wrote a paper that identified Colombia as an ideal place to grow flowers. In 1970, Cheever turned his dissertation into a business, planting an operation in Bogota. Others followed.

To disrupt cocaine trafficking, the U.S. government suspended import duties on Colombian flowers in 1991. It was a boon for Colombia, but sales of U.S. roses dropped 95%.

Hillsboro, Ore., grower Sandra Laubenthal of Peterkort Roses said she remembers the change. Her farm continued growing roses year-round until the cost of heating greenhouses was too high to compete. Now, her biggest Valentine’s sellers are lilies and tulips.

In the month prior to Feb. 14, according to Abel Serrano, U.S. Customs and Border Patrol Assistant Port Director at the Miami Airport, 60 to 70 cargo jets per day, each carrying more than a million flowers, land at Miami’s airport.

There, Serrano said, 24 hours a day, agricultural experts process 720 million stems, checking for exotic pests or diseases that could harm American agriculture and the environment.

The flowers are X-rayed for contraband. Then, specialists wielding magnifying glasses shake flowers upside-down over white paper. The flowers must be kept cold and unbruised.

“We’re trying to protect agriculture and free trade,” said Serrano. “There’s a lot of stress because many people rely on us.”

In 2019, when the government shut down for 35 days, Miami’s agents continued working.

“Last winter was tough,” said Serrano. “Our people were not getting paid but still showing up for work. I think a lot of them take pride in what they do.”

From Miami’s airport, the flowers are loaded in refrigerated trucks and shipped across the U.S.

After passing through many miles and hands, the roses are given as symbols of love, often alongside chocolates.

A world in a bite

Glass flicked on the lights. The walls were stacked with red gift boxes. Inside display cases, rows of truffles waited for eager buyers who might never know how far their truffles had traveled, how many had labored to make them.

But Glass knew: there’s a world inside a bite of each chocolate.