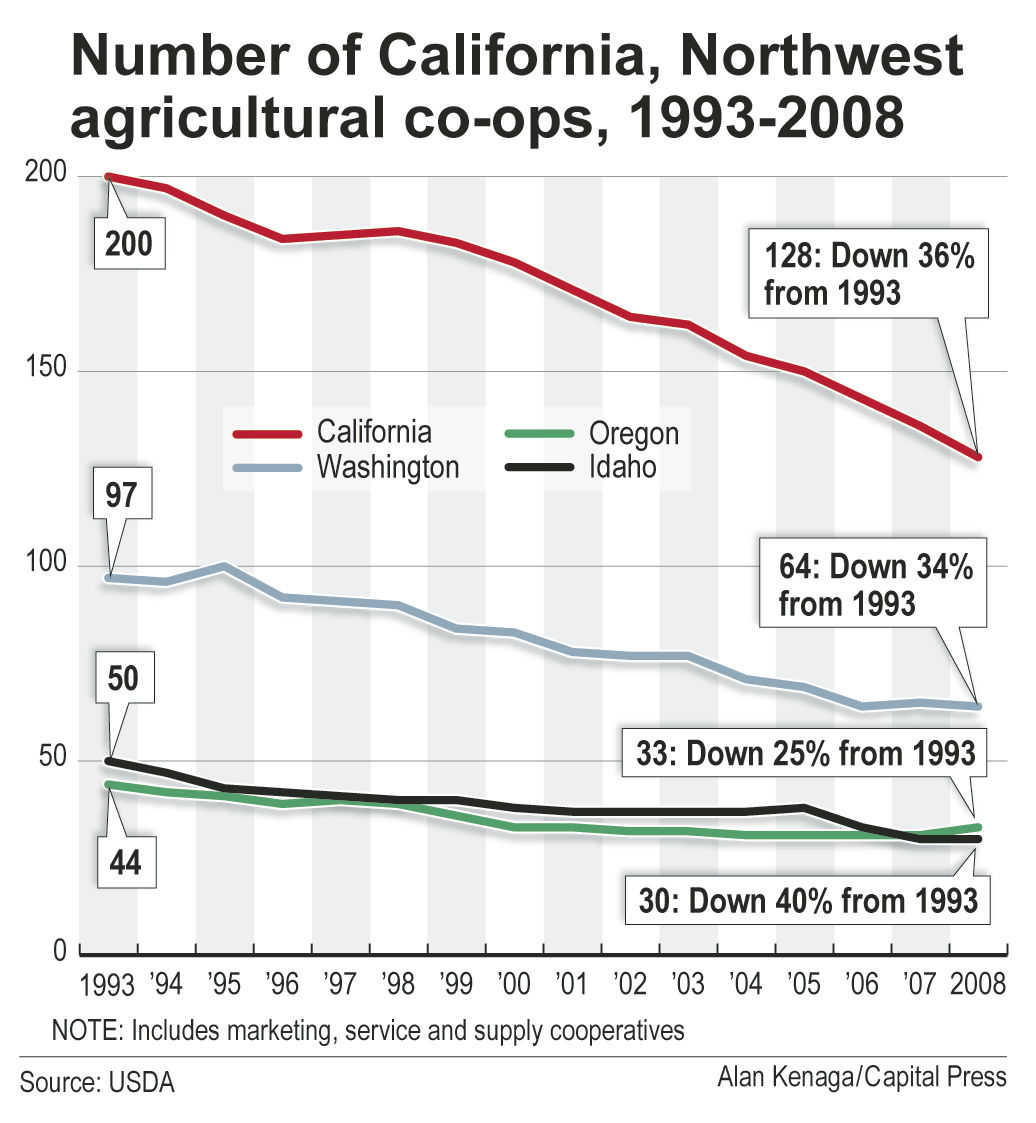 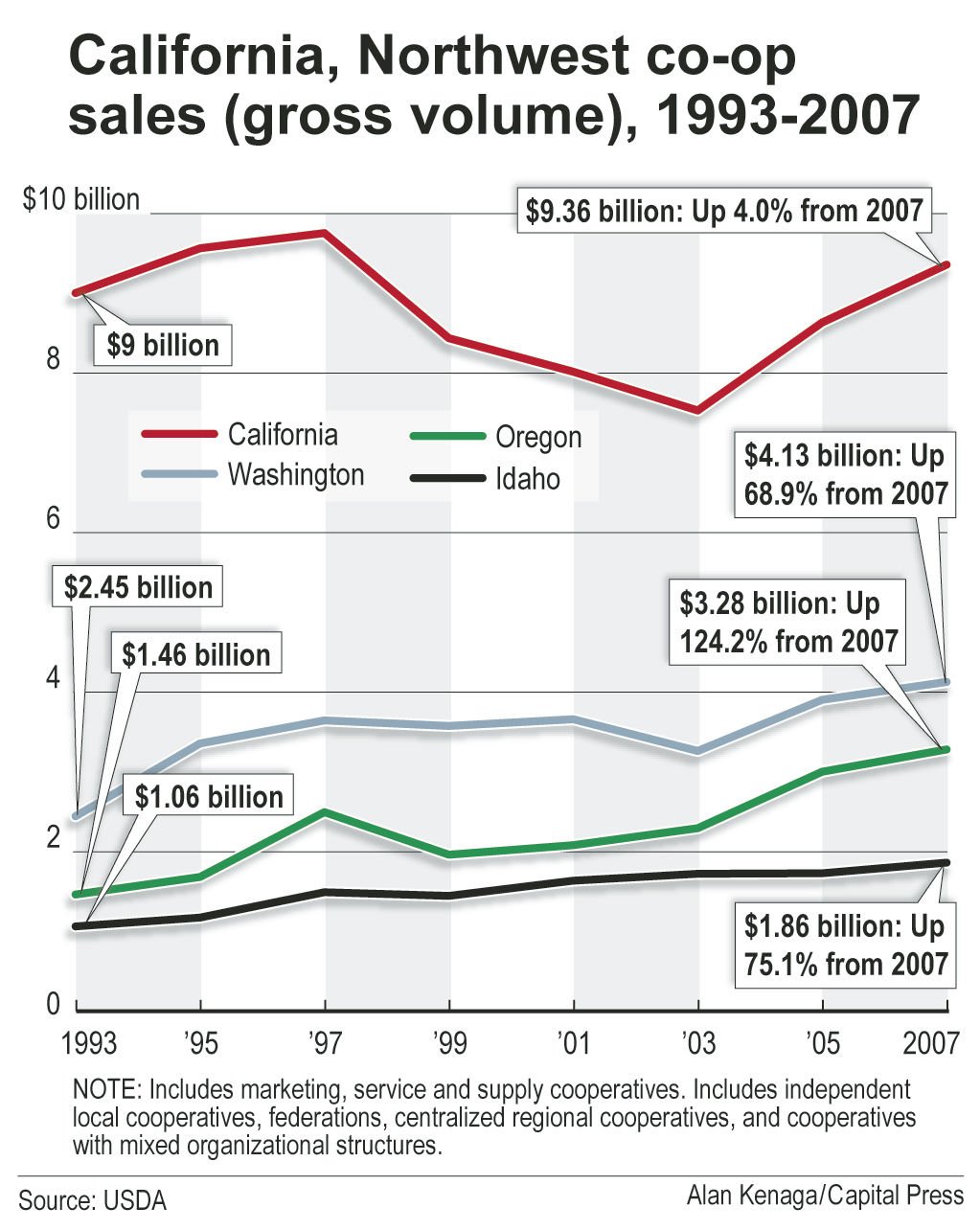 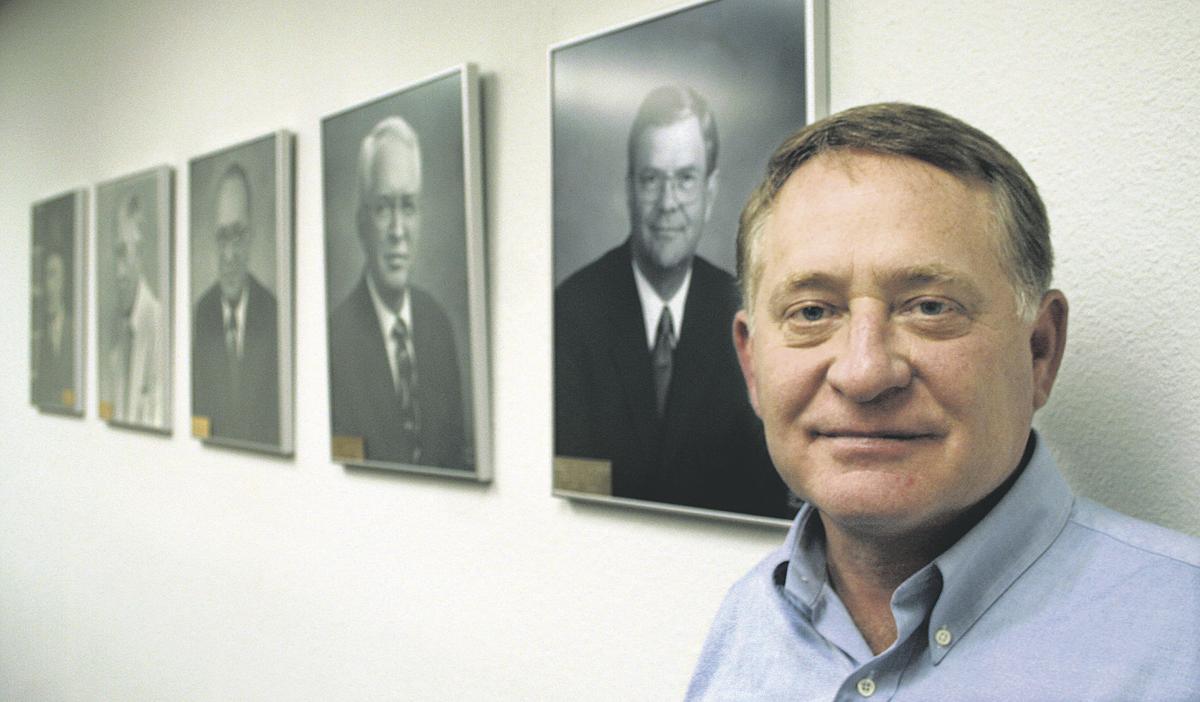 Mateusz Perkowski/Capital Press George Smith, president and CEO of the NORPAC Foods, stands before the portraits of his predecessors at the farm cooperative. Since 1924, farmers have been able to build equity in the processing company by supplying it with produce. With new-generation cooperatives, farmers buy and sell shares of ownership.

Mateusz Perkowski/Capital Press George Smith, president and CEO of the NORPAC Foods, stands before the portraits of his predecessors at the farm cooperative. Since 1924, farmers have been able to build equity in the processing company by supplying it with produce. With new-generation cooperatives, farmers buy and sell shares of ownership.

As better roads and faster vehicles linked previously disconnected markets in the West, some farmers in Oregon's Willamette Valley decided to seize the opportunity.

By launching the Stayton Canning Co. in 1924, growers were able to preserve their fruit in large barrels, then ship it to other companies for further processing.

Much has changed in the intervening decades. Now called NORPAC Foods, the cooperative specializes in flash-frozen vegetables. One important thing has stayed the same, though: the cooperative's basic ownership structure.

Under this traditional cooperative model, farmers earn ownership based on the amount of crops they deliver to the company over time.

The structure has endowed NORPAC with a long-term, multi-generational perspective, said George Smith, the firm's president and CEO. "We try to make a point of investing in things we know how to do -- stick with our core competencies and our mission."

If farmers have a unified vision of where their company is heading, this traditional model is perfectly suited to the modern world, said Michael Cook, an economist specializing in cooperatives at the University of Missouri.

However, many traditional cooperatives were formed decades ago, when growers generally had different incentives for joining together and the modes of collaboration were limited, he said.

Farmers are just as driven to cooperate today, but the options are much more varied and complex, Cook said. Farmer-owned business ventures now range from traditional cooperatives to investor-driven firms that resemble publicly traded corporations.

"We're seeing a revolution in formalized organizational alternatives," he said. "There are many nodules on that continuum."

Traditional cooperatives were often formed for defensive reasons, such as farmers building a grain elevator to create or preserve competition for their crop, he said.

As profit margins in U.S. agriculture eroded after World War II, reaching a "tipping point" in the mid-1980s, farmers began forming cooperatives to add value to their crops, Cook said.

Typically, such processing ventures were a lot more expensive.

The Dakota Growers Pasta Co. offers an example of the creation of a "new generation" of cooperatives and its potential for further structural shifts.

In the early 1990s, more than 1,000 durum wheat growers in North Dakota bought equity shares in the newly formed cooperative. The $12.5 million they raised allowed the company to qualify for loans and eventually build a $40 million flour and pasta plant in Carrington, N.D.

Here lies a crucial distinction between traditional and new-generation cooperatives.

When farmers formed traditional cooperatives, they would lend their own money to the company or take out loans on its behalf, with their property serving as collateral, said Robin Cross, a researcher at Oregon State University who has studied cooperatives.

With traditional cooperatives, some of the profit from the sold product is returned to the grower, while the rest is retained by the cooperative. That equity is eventually paid out to farmers on a revolving basis.

This initial funding arrangement may seem unfathomable to our "modern stock market-era minds," but it was often the only way for individual growers to challenge monopolistic crop buyers, Cross said.

With new-generation cooperatives, the farmer gains immediate equity in the company. If he wants to cash out, the structure allows him to sell to another farmer rather than wait for the equity to revolve out.

On the other hand, for a new grower hoping to join an existing cooperative, "it will be a much higher capital investment" -- particularly if the company is prosperous and share prices rise, said Rob King, an economist at the University of Minnesota.

New-generation cooperatives don't need to retain as much capital, because they're not regularly paying out accumulated equity to farmers, he said. Members are generally able to keep more of the profits.

The structure also helps defuse the "horizon problem" encountered by some traditional cooperatives, in which farmers with a lot of built-up equity fear jeopardizing that capital by making new investments, King said.

Such conflicts are easier to avoid with new-generation cooperatives, since farmers who disagree with the company's direction can simply sell their shares and leave.

"If everyone is an investor in the company, it helps them be interested in the same outcomes," Cross said. "Like a stock investor, you're hoping the company will grow and do well."

In one significant respect, though, new-generation cooperatives restrict the farmer's individual flexibility. Ownership shares aren't just associated with equity -- they also obligate the farmer to deliver a set amount of crop to the company.

That can be a problem if the cooperative is unprofitable, since the company won't be able to pay as much. A cooperative's success can also put a strain on farmers' delivery obligations, which has prompted some cooperatives to radically change their structure.

In the early 2000s, for instance, the Dakota Pasta Growers Co. was generating more than $130 million in annual revenues, up from $20 million at its inception.

By that point, the cooperative's members were having a hard time personally growing and delivering enough wheat to the company. Farmers were also having difficulty cashing out their equity, since only other wheat growers were allowed to buy shares.

In 2002, the cooperative converted to a corporation in which the farmer-owners became shareholders, thereby lifting restrictions on who supplied wheat and who could invest in the company.

Revenues roughly doubled by 2009, to nearly $300 million, and the company earned more than $17 million in net income.

Dakota Pasta Growers Co. isn't the only cooperative to undergo a major transformation.

A cooperative of California nut farmers, Diamond Growers, converted to a publicly traded corporation in 2005, simultaneously changing its ownership structure and issuing an "initial public offering" of its stock on the Nasdaq Stock Market.

The transaction raised more than $105 million for the new company, Diamond Foods, much of which was used to pay off debt.

In 2004, the U.S. Premium Beef cooperative of cattle producers completed a similar conversion, citing the need for better access to capital markets. Profits have increased exponentially since the switch.

The firm basically needed more money to expand, Cook said. "They became so successful the people buying from them wanted more."

In the case of Dakota Growers Pasta Co., continued strong performance prompted yet another metamorphosis. Earlier this year, the operation was taken over by Viterra, a multinational agri-business based in Canada, for $240 million.

Change has been a catalyst for growth among these cooperatives, but that doesn't mean the traditional model is now outdated.

For NORPAC, the system of building equity through patronage ensures that its 210 members become experts in growing certain crops and have a vested interest in their quality.

"We believe it's an advantage to be consistent," said Smith, the co-op's CEO. "The consistency with the membership base is a real key."