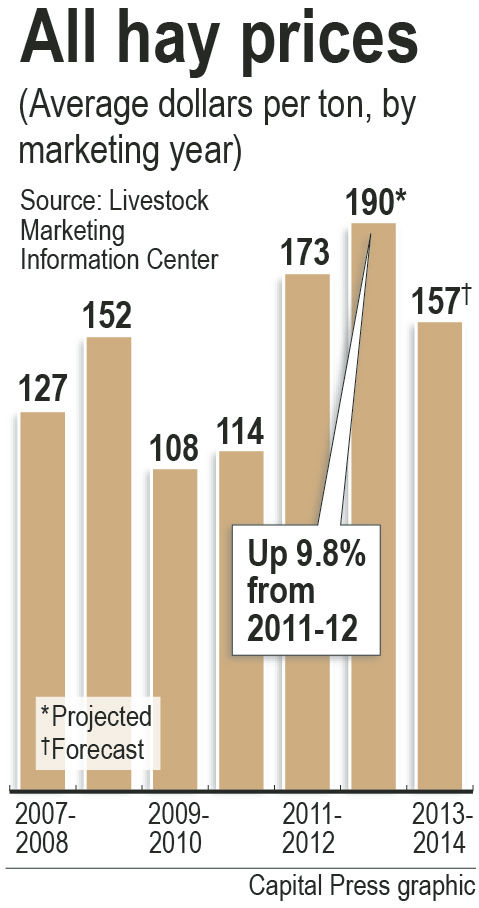 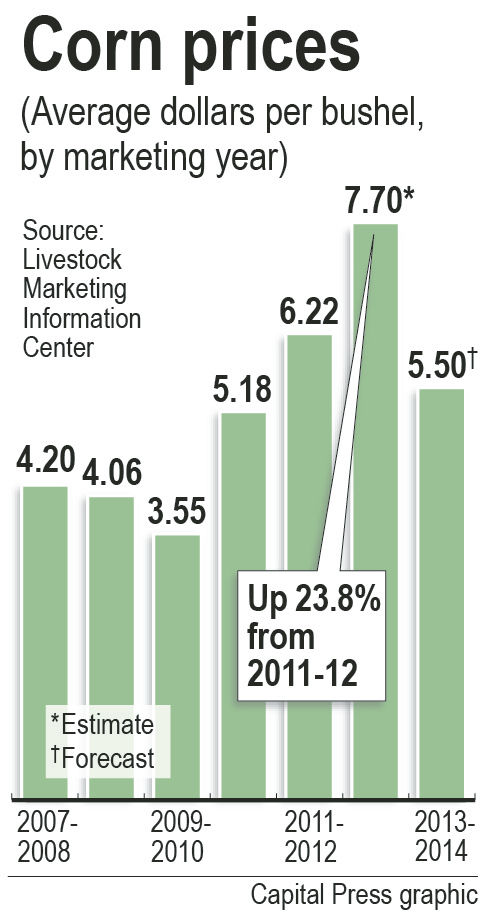 After two years of record-high hay and corn prices, livestock producers are no doubt looking for some relief in 2013. They just might get it if forecasts by the Livestock Marketing Information Center come to fruition.

LMIC projections have all hay prices softening by $33 a ton and corn coming down $2.20 a bushel in 2013. But many factors are at play, including weather, which really took its toll on markets this year, said Katelyn McCullock, LMIC ag economist.

While the center predicts feed prices to moderate in 2013, hay will remain high until the new hay crop starts coming in during the second quarter. Likewise, corn prices are expected to remain high until there's some certainty on how that crop is faring next summer, McCullock said during a recent webinar on "Managing Drought and Disaster Impacts," sponsored by the Agriculture and Applied Economics Association.

The all-hay price jumped about $60 a ton in 2011 due to the drought in the Southern Plains. It jumped another $17 a ton this year to post a new record as a result of 2012's more widespread drought, she said.

Harvested hay acres in 2011 were the lowest in at least the last 30 years at a little under 56 million, she said. While they rebounded to 57 million acres this year, most of the additional harvested acreage was a return of production in the Southern Plains. Real growth in hay acreage in 2012 only represented about 0.5 percent, she said.

The number of harvested acres was the least of livestock producers' concerns this year. As a result of the drought, production was actually down 7 percent, and prices continued to climb from where 2011 left off, she said.

In the long term, high-value crops are going to be competing with hay for acres, and it's not expected hay will gain back much of its pre-2011 acreage. But 2013 may see a more normal weather pattern and more normal yields, she said.

Other factors that will affect hay prices in the coming year are exports, which have been growing steadily over the last 10 years and are becoming a bigger deal, the availability of alternative feeds until the next crop comes in, and usage this winter, she said.

That really squeezed livestock producers, who likely didn't buy a lot of feed ahead of time, betting prices would come down with record-high plantings, she said.

As the drought progressed and continued to lower yield potential, prices skyrocketed. Corn yields are expected to be 122.3 bushels per acre in 2012, a dramatic decline and the lowest since 1995, she said.

The livestock, ethanol and export sectors are rationing corn. Ethanol is expected to be down less than 10 percent, exports down 25 percent, and feed and residual down about 10 percent in 2012, she said.

Cash prices are encouraging corn producers to sell instead of store corn, implying futures prices need to go higher. With higher prices, there'll be even more adjustment, with the most reduction coming from the livestock sector, she said.

LMIC forecasts 2013 planted corn acreage will be similar to 2012 with more normal but not record yields. Tight stocks will continue, but more normal production should bring prices into the mid $5.50s a bushel, she said.