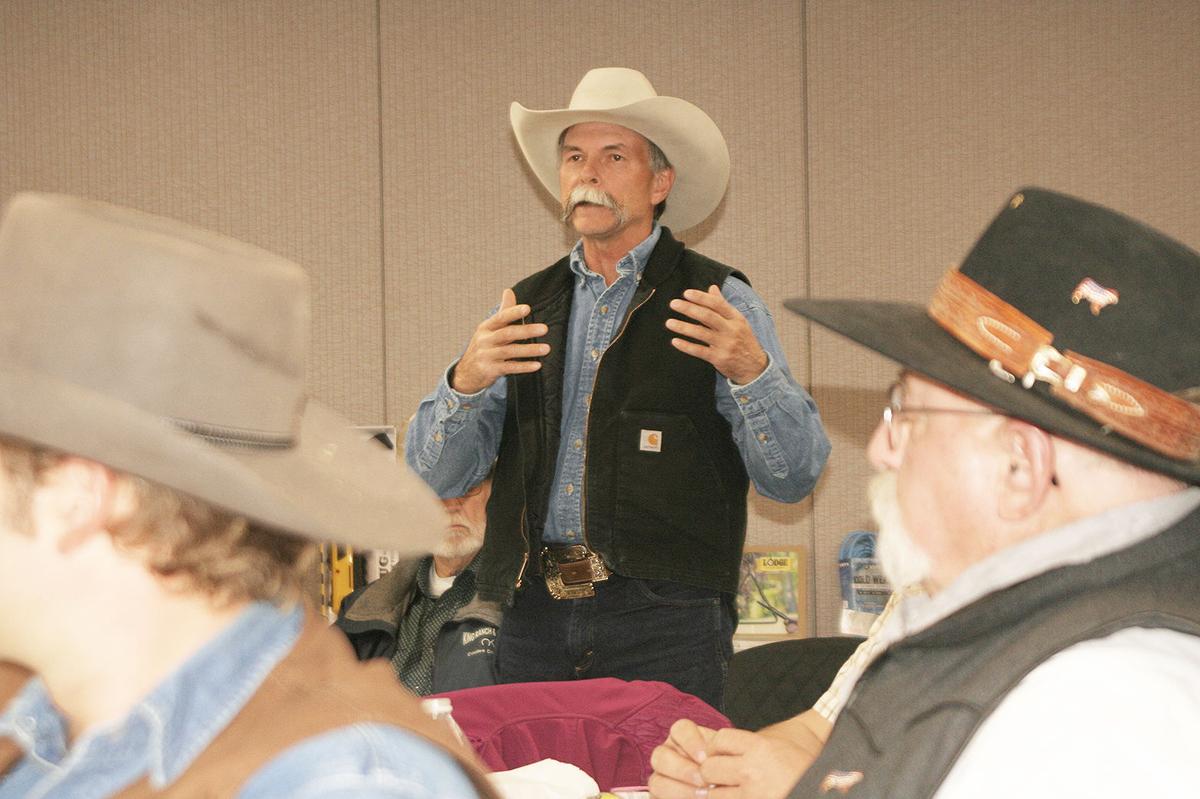 R-CALF USA CEO Bill Bullard speaks Oct. 19, 2019, to a room full of ranchers during a Cattle Producers of Washington meeting. 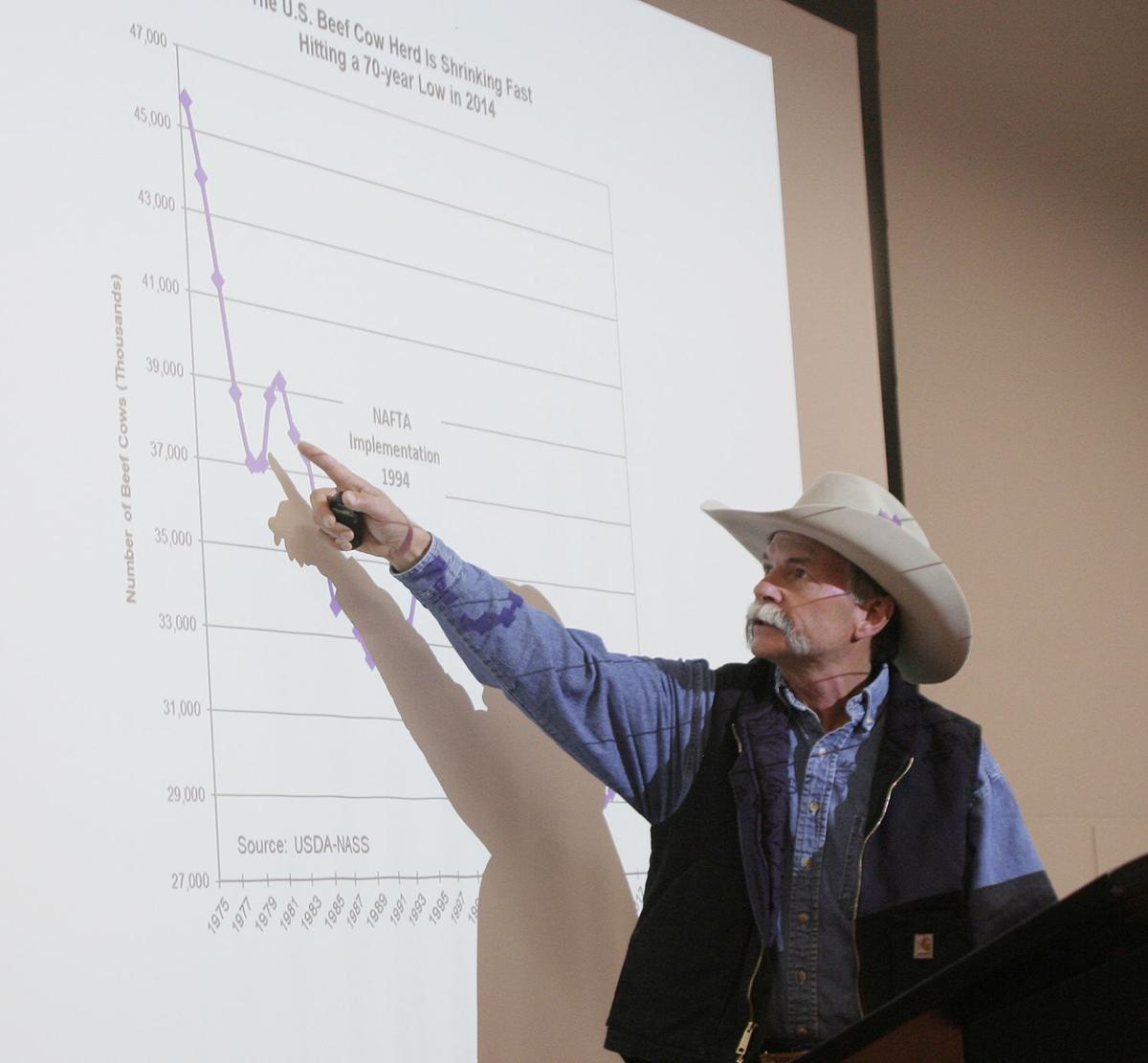 Bill Bullard, R-CALF USA CEO, shows how the U.S. beef cow herd has declined in the last 45 years Oct. 19, 2019, during a Cattle Producers of Washington meeting in Airway Heights. 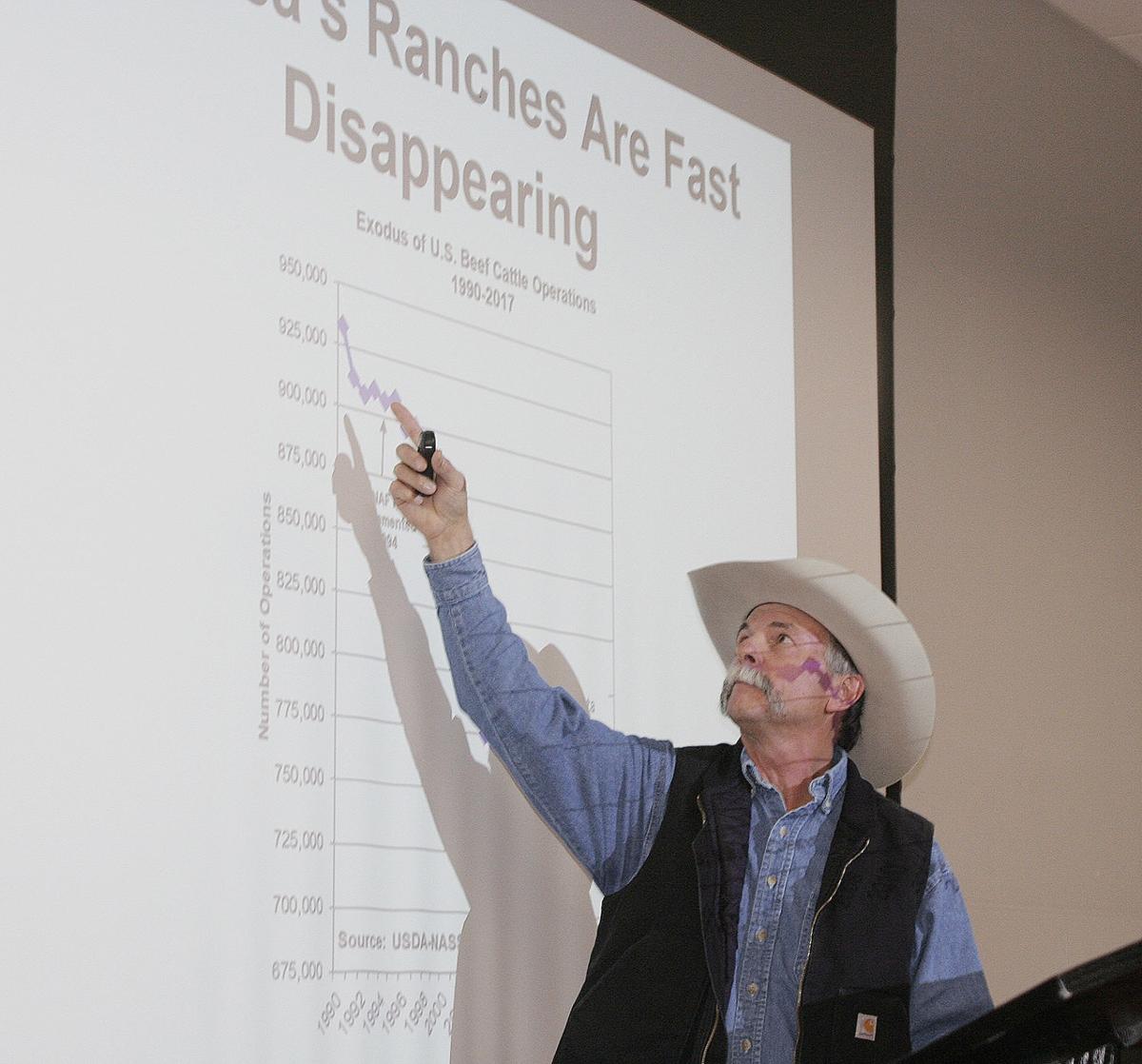 Bill Bullard, R-CALF USA’s CEO, shows how the number of ranches has shrunk in the last 45 years Oct. 19, 2019, during a Cattle Producers of Washington meeting in Airway Heights, Wash. 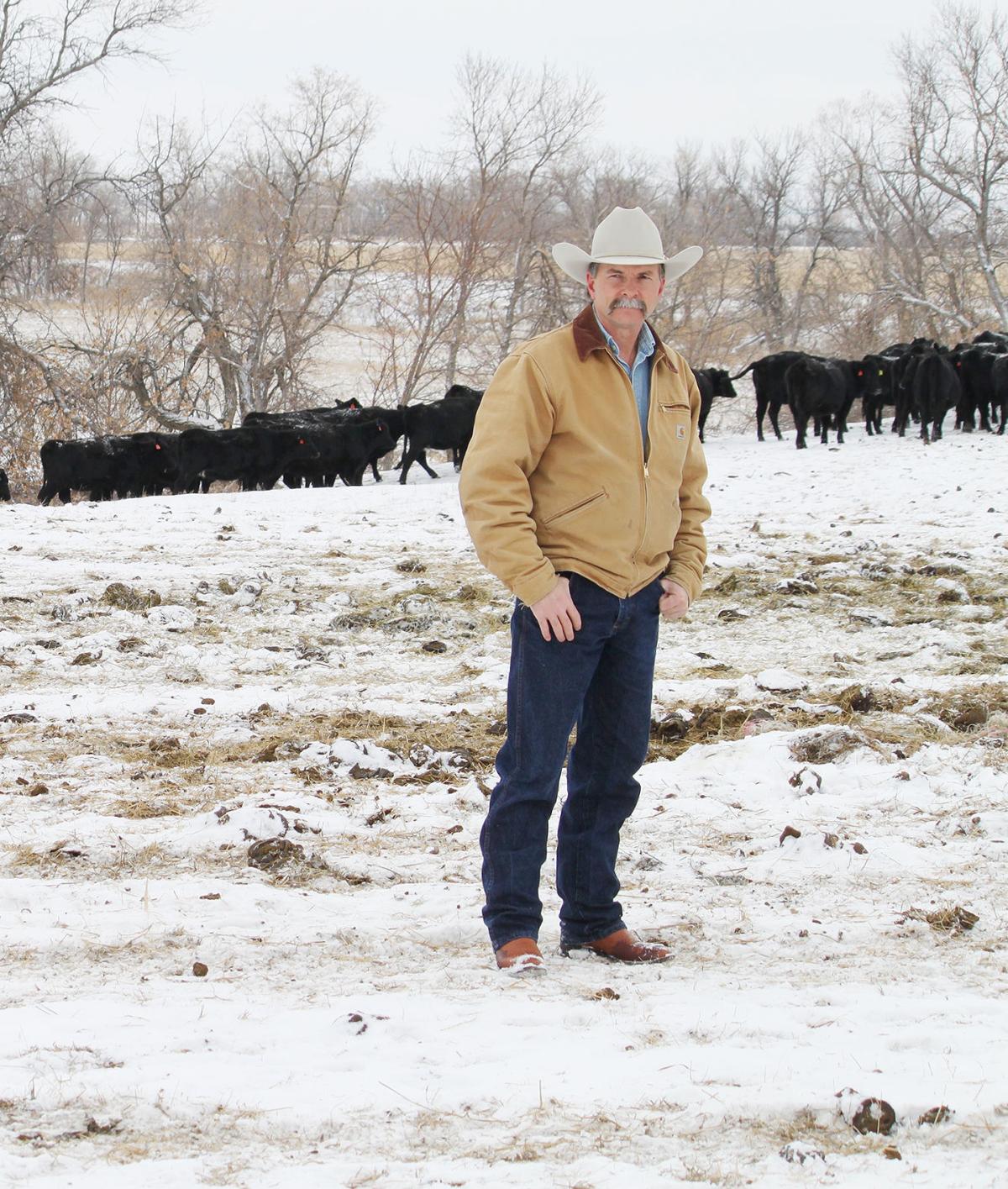 R-CALF USA CEO Bill Bullard hopes to preserve and protect the industry’s fed cattle cash market. “It is the Holy Grail for our industry in terms of preserving and promoting competition,” he said. 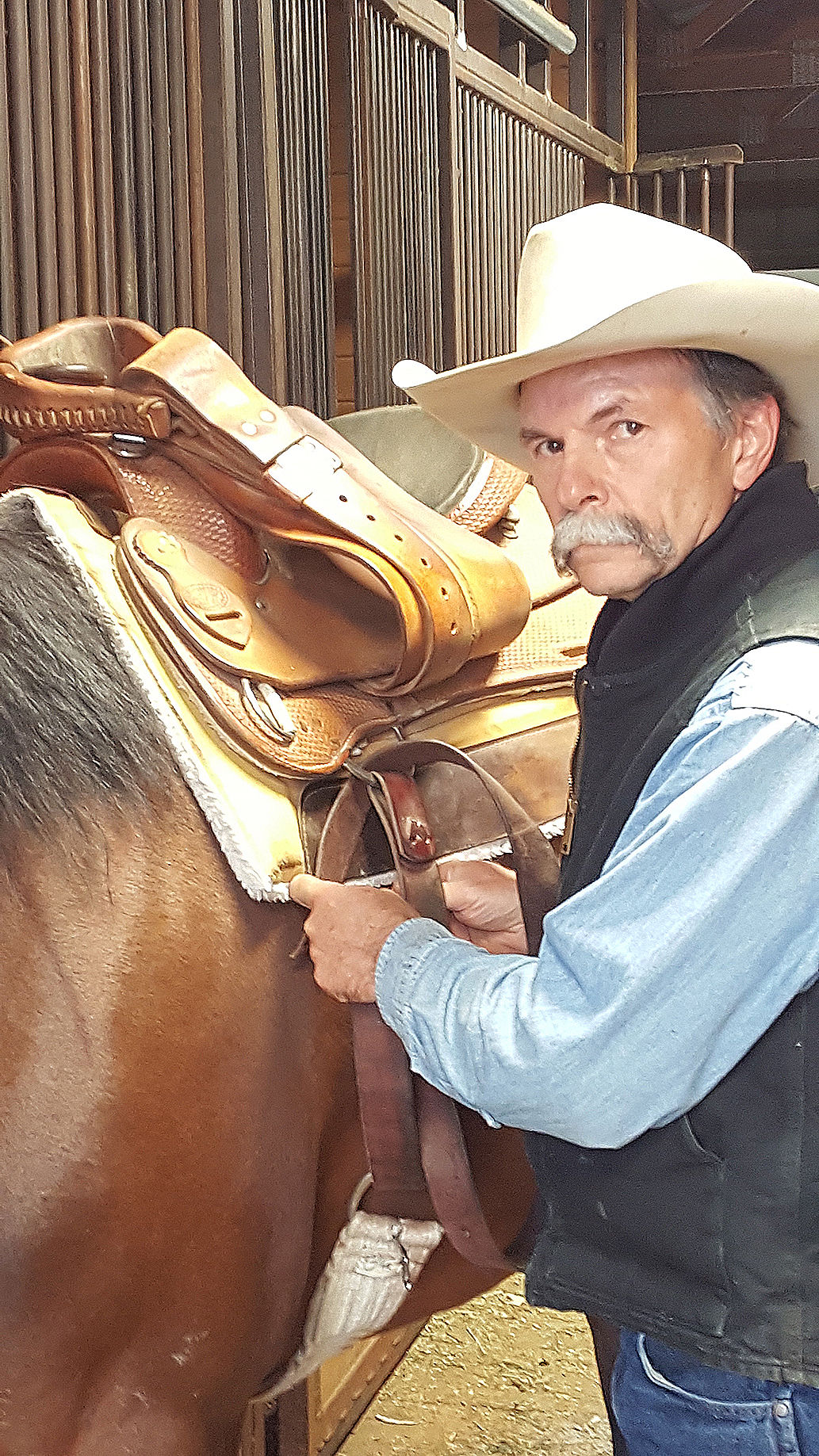 Bill Bullard, CEO of R-CALF USA, tends to his horses in Billings, Mont.

R-CALF USA CEO Bill Bullard speaks Oct. 19, 2019, to a room full of ranchers during a Cattle Producers of Washington meeting.

Bill Bullard, R-CALF USA CEO, shows how the U.S. beef cow herd has declined in the last 45 years Oct. 19, 2019, during a Cattle Producers of Washington meeting in Airway Heights.

Bill Bullard, R-CALF USA’s CEO, shows how the number of ranches has shrunk in the last 45 years Oct. 19, 2019, during a Cattle Producers of Washington meeting in Airway Heights, Wash.

R-CALF USA CEO Bill Bullard hopes to preserve and protect the industry’s fed cattle cash market. “It is the Holy Grail for our industry in terms of preserving and promoting competition,” he said.

Bill Bullard, CEO of R-CALF USA, tends to his horses in Billings, Mont.

When Bill Bullard gets up to speak to a group of ranchers, he’s all business. He doesn’t open with a joke or a humorous story. He’s not there as the after-dinner entertainment.

He’s there to tell them why the U.S. is losing its ranches, and why cattle prices are down as consumers continue to pay record high beef prices.

He talks about the legal battles being fought on their behalf in courts, and those that are on the horizon.

For nearly two decades, Bullard, 62, has been the CEO of the national nonprofit Ranchers-Cattlemen Action Legal Fund United Stockgrowers of America, or R-CALF USA. R-CALF claims it is the nation’s largest rancher-only organization, representing about 5,800 cattle and sheep producers in 43 states on trade and marketing issues.

The organization’s priorities include mandatory country-of-origin labeling for U.S. meat and dairy products, the right to choose which animal identification technologies to use, animal health and property rights.

Bullard believes in R-CALF and what it stands for. Whether he’s meeting with ranchers in a small hotel meeting room or going to court to stick up for ranchers, he says he’s all-in.

“It’s a part of me,” Bullard said. “I’m grounded in it. My first passion was being a cow-calf producer.”

R-CALF got its start in 1998, when three ranchers filed an anti-dumping lawsuit against Canada and Mexico, accusing them of exporting live cattle to the U.S. at prices that were below production costs, according to the organization.

The ranchers convinced the U.S. Department of Commerce to impose anti-dumping tariffs against Canada. A year later, R-CALF USA was formed.

Bullard joined in 2001, after a headhunter hired by the board contacted him and asked what he thought about becoming CEO of a “relatively new but fast-growing cattle association.”

“I said, ‘You have my interest,’” Bullard said. It was a hand-in-glove fit.

Today, he said, the livestock industry needs to refocus on the “inherent strength” of the American family farm and ranch system of agriculture. He maintains that public policies have drifted away from supporting family farmers.

One example of R-CALF’s stance is the antitrust class-action lawsuit it filed against processors Tyson, Cargill, JBS and National Beef, which slaughter about 80% of U.S. feedlot cattle. R-CALF alleges that the packers violate the law by depressing cattle prices to bolster their profit margins.

R-CALF is currently awaiting the judge’s decision on a motion to dismiss filed by the four companies.

“We hope to hear soon,” said Bullard, who is confident R-CALF will prevail.

“He tries to reason with folks, but they haven’t been afraid to take legal action when it became necessary,” said Scott Nielsen, a Kettle Falls, Wash., rancher who is president of the Stevens County Cattlemen’s Association and a director of the Cattle Producers of Washington.

Both organizations are R-CALF affiliates.

“Sometimes it takes those kinds of things to show how blatant some of those problems are,” Nielsen said. “He’s done a really good job of showing that, and trying to hold some segments of our industry accountable.”

R-CALF also wants to see significant changes in public policy. Bullard wants policy that is committed to preserving and protecting family farms and ranches by providing a level playing field for independent producers with meat packers.

His goal, he said is “to give the producers the same level of bargaining power in the marketplace as the packing industry has.”

Bullard says there are competing interests within the livestock industry.

“There are those who profit greatly from importing cheaper Mexican cattle, as opposed to buying cattle from American cattle producers, and those producers will never agree with the reforms we are seeking,” he said.

Other organizations attempt to represent all segments, including ranchers, feeders and multinational packers, Bullard said.

“Those interests will never merge with the interests of independent cattle producers, simply because they have a different financial interest than the industry itself,” he said. “I think it would be a waste of resources for the industry to try to speak with one voice.”

The National Cattlemen’s Beef Association says on its website that it represents 25,000 individual members and several industry organization members — a total of more than 175,000 cattle producers and feeders, plus allied industry members. A representative of NCBA did not respond to requests for comment for this story.

Independence is what separates R-CALF from other organizations, Bullard said. “We are aggressive fighters for the interests of our members, and we make no apologies for it,” he said.

Started in ranching Bullard was born in Norfolk, Va. — his father was in the Navy — and spent his high school years with relatives who ranched in North Dakota.

Bullard was drawn to ranching. “At the time, my plan was to provide a legacy I could leave to my children, and they could then leave to (my) grandchildren,” he said. “It was that desire to be taking care of a small section of the world.”

Bullard started ranching after high school with a friend from FFA, from 1977 to 1979. He then bought a ranch in northwestern South Dakota, owning and operating a 300-head cow-calf operation with his wife, Jeanne, until an economic downturn in 1985.

They kept horses for several years after the recession, while Bill was in college, then went three or four years without any.

“We went through withdrawals and had to remedy that as quickly as possible,” Bullard said.

Their three children are now grown. The middle daughter, Candace, works for R-CALF as its marketing manager.

The Bullards keep seven horses, with two ponies for the five grandkids.

When he’s not working, Bullard builds. He built all the stalls in Jeanne’s horse barn — “It gave me an excuse to buy a new welder” — a rail pipe loafing shed and an implement to spread compost. He is now working on a rail pipe arena.

Bullard enjoys developing the horses to compete in the show ring.

“It’s just who I am,” he said. “It’s my wife who has the strongest passion for the horses, and a better skill. I hate to admit it, but she’s a better roper than I am.”

Ordinarily, travel on behalf of R-CALF takes up nearly half of Bullard’s year.

“This is essentially a 24-7 type job,” he said. “Always a pleasure to meet cattle producers in their home area, and perhaps a greater pleasure to make it back home to my family.”

Because of the COVID-19 quarantines, Bullard’s meetings are now over the phone or the internet.

“We find by using social media, we reach far more people than we can holding a meeting in New Mexico or Alabama, where 80 to 150 people show up,” he said. “We literally have tens of thousands who have watched on a regular basis the Facebook Live meetings that we’ve held.”

“Small gathering in Spokane, who shows up? Bill Bullard’s there to talk to us,” Wishon said. “I can venture to guess if I picked the phone up right now, I won’t get Bill Bullard. ... But if I leave a message and say, ‘Bill, this is Ted Wishon, I need to talk to you about some issues,’ I will have a call back, and at a fast time. He gets right back to his people.”

Wishon ranches with his wife, Debbie, and sons George and Jake in Colville in the summer and Paterson in the winter. He joined R-CALF during its first membership drive, before Bullard came on board.

Bullard is “instrumental” in keeping ranchers informed and bringing change to the marketplace, Wishon said.

“He’s worked on these issues for years and years,” echoed Nielsen, the Kettle Falls rancher. “He’s an encyclopedia on that stuff. That’s what he does, he lives in that world.”

Nielsen credits Bullard with an ability to explain rancher priorities to elected officials.

“They know what they want and what they need to get where we’re trying to go; we know what we need,” he said. “You need that link of somebody like Bill to bring those two worlds together.”

R-CALF is “really, truly, our only light,” Wishon said.

Looking aheadR-CALF’s goal is to recover the “significant” financial losses ranchers across the U.S. have suffered at the hand of the packers, Bullard claims.

He can’t give an estimated total for those losses.

“I’ve been advised not to by our attorney,” he said. “But over the course of half of my lifetime, we’ve seen the exodus of over half a million cattle producers, me included, since 1980.”

“We didn’t lose those because they lost their passion for ranching,” Bullard said. “We lost those producers because they were operating in an economy that was stacked against them, that persistently produced prices too low to cover their production costs.”

On the move: Idaho farm relocates away from high-growth region